The Designated Player: Does Anybody Want to Win the Supporters’ Shield? 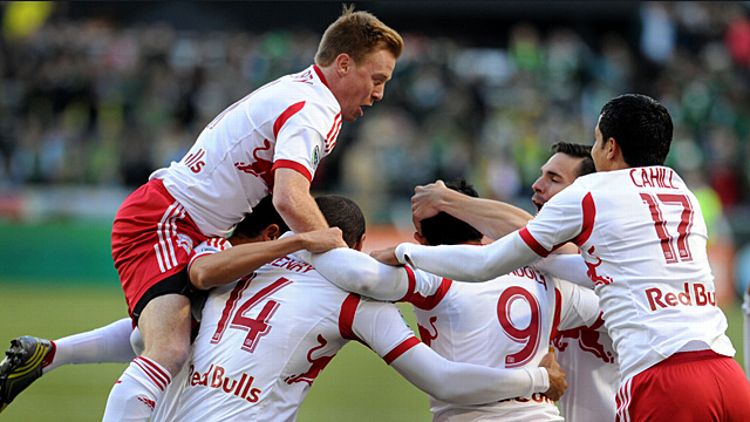 It was a rather crazy set of results this past weekend in MLS. Only one team out of a possible four that could have clinched a playoff spot did so. It was yet another reminder that the one consistent winner in MLS this season has been forced parity, though it was also a reminder that teams have consistently shot themselves in the foot after getting into positions to pull away from their rivals. It makes one wonder this: Does anybody want to win the Supporters’ Shield?

I hope so. As we’ve reported elsewhere, for all that the uneven schedule has robbed the Shield of being a true, even metric for who the best regular-season team is, it’s still a significant marker of how a club has come together over the year. And it does of course come with a CONCACAF Champions League spot.

So who are the remaining contenders? Mathematically, there are a few sides that could still be in contention but aren’t likely to get there given run-ins. But by my reckoning, there are five contenders with more or less realistic aspirations. Here they are, listed in their current order in the standings.

There’s a possibility we’re witnessing the high-water mark of the Red Bulls’ season right now. They’ve never been in contention this late and, famously, have never won a trophy, but they lead the Supporters’ Shield standings after Round 32 of 34, and they’re the only team to secure a playoff spot so far. That happened when Tim Cahill tied the game against New England, 2-2, on Saturday night.

Depending on your cup-half-empty/half-full perspective, the New England game either showcased New York’s inability to put teams away (New York sat deeper and deeper in the second half and Thierry Henry continues to look surprisingly gun-shy in the final third) or the newfound resilience that may be the signature of Mike Petke’s first year as coach. The Red Bulls have scored 18 goals in the last 15 minutes of games this year, 11 of which have won or tied games. Cahill, who got the late leveler in Seattle last week and the dramatic goal against New England, has scored five of those goals. They need a big help from others to win the Shield, but they’re showing qualities that may make them dangerous in the playoffs.

Remaining games: at Houston, vs. Chicago

This is a testing time for RSL. Losing the U.S. Open Cup final continued an unwanted streak of missing out on silverware in front of their own fans, and it happening against the league’s worst team was a blow for a team that has broken the 50-point mark for the fifth successive season. That consistency sees them still atop the West, though like the Red Bulls, they’ve played more games than the teams around them.

But Real Salt Lake’s consistency comes with a caveat: The GM/coach team of Garth Lagerwey and Jason Kreis has put an emphasis on a rigorous system that maps out everything from player recruitment to squad rotation. This means that even if Real Salt Lake were to lose key first-team players this offseason, they could be replaced with well-drilled, promising youngsters. But that has attracted attention, most notably from the monied expansion team New York City FC, who want Kreis as their coach; the prospective position has intrigued the former Real Salt Like striker enough to take a meeting with senior New York City FC management in Manchester.

With Kreis’s contract up for renewal in Real Salt Lake, a club built on stability, may be in for some upheaval. Can they at least postpone it till the postseason? Saturday offered few clues. Real Salt Lake couldn’t hold out against a Dallas side that at one point looked to be part of the Shield conversation themselves.

Remaining games: at Portland, vs. Chivas

If Sporting K.C. win out, they win the East for the third year running, despite looking curiously unconvincing of late. Since their victory in Salt Lake on July 20, Kansas City has lost to Montreal, New York, San Jose, Chicago, and Philadelphia.

This is not a side that looks in playoff form at the moment, and, most worryingly, its home form has been underwhelming, typified by its poor performance against Philadelphia last week.

Even that soft home form should be enough to see off D.C. United in the remaining game at Sporting Park, but two of Sporting’s remaining three games are on the road against conference rivals. Sporting K.C.’s formidable defense has gone missing, and with a midfield that’s looking somewhat indistinct since losing Roger Espinoza and Kei Kamara, they are going to drop some more points. Their next game, on the road at Houston, will be crucial; the pair could meet up for a third successive playoff clash (something no Sporting fan may want after the last two).

Remaining games: at Houston, vs. D.C., at Philadelphia

The Sounders should still be favorites for the Shield, but there are suddenly a lot of questions surrounding the club. And I’m not even referring to the lingering effects of Saturday’s shocking loss in Colorado. The Rapids may be a much improved side, but even with the Sounders missing Clint Dempsey and Obafemi Martins, nobody saw Seattle suffering a franchise-record 5-1 loss as they did. Still, it happened, and Sigi Schmid can only hope that it was a lesson learned.

With international games upon us, the Sounders now have to play Cascadia Cup rivals Vancouver and Portland, in quick succession, the latter on the road in one of the most intense atmospheres in Major League Soccer, and all without the help of Brad Evans and Eddie Johnson (both national team call-ups). Cascadia games are outliers, at the best of times, when it comes to league form, and even if Seattle navigates those intense matches, there’s still a trip to a Dallas team where Schellas Hyndman is playing for his job, and a final-day test against the champion Galaxy. This is not the easiest of run-ins.

Until the draw against New York last week, the Sounders were on a winning streak that looked likely to propel them to the Shield in comfort. They should still win it, but if they don’t have their noses in front after the Cascadia games, things get very interesting. Wednesday and Sunday are big, big games for this most ambitious of teams.

Remaining games: vs. Vancouver, at Portland, at Dallas, vs. L.A. Galaxy

And then there’s Portland, which has two huge games of its own coming up — one against Seattle, of course, and a final reckoning with the Real Salt Lake side that put them out of the U.S. Open Cup. The Timbers have never made the playoffs. Caleb Porter arrived with the expectation that he was the final piece in the Timbers’ puzzle — the man who could deliver success to a Timbers team that had never matched its form in front of its wild home fan base with grit on the road.

Porter duly turned the team into a playoff-bound side, taking points in 12 of its road games this year. Granted, there may only be two wins among that lot, suggesting that pragmatism has won out over ambition, but the Timbers have remained in the hunt throughout the year in large part because they’ve proven so difficult to beat. If they’ve also failed to see out games they should have won (such as Sunday night in Vancouver), it all goes down as progress, and after something of an indifferent summer by their early-season standards, victories over Colorado and L.A. before the Vancouver game have set up the Timbers for not just a playoff charge, but a possible late Shield run as well. If they’re to do it, they’ll probably have to finish the job on the road, ironically, but if they’ve gotten past Seattle and Real Salt Lake to put themselves in that position, don’t expect an 11th road draw in the final game at Chivas.