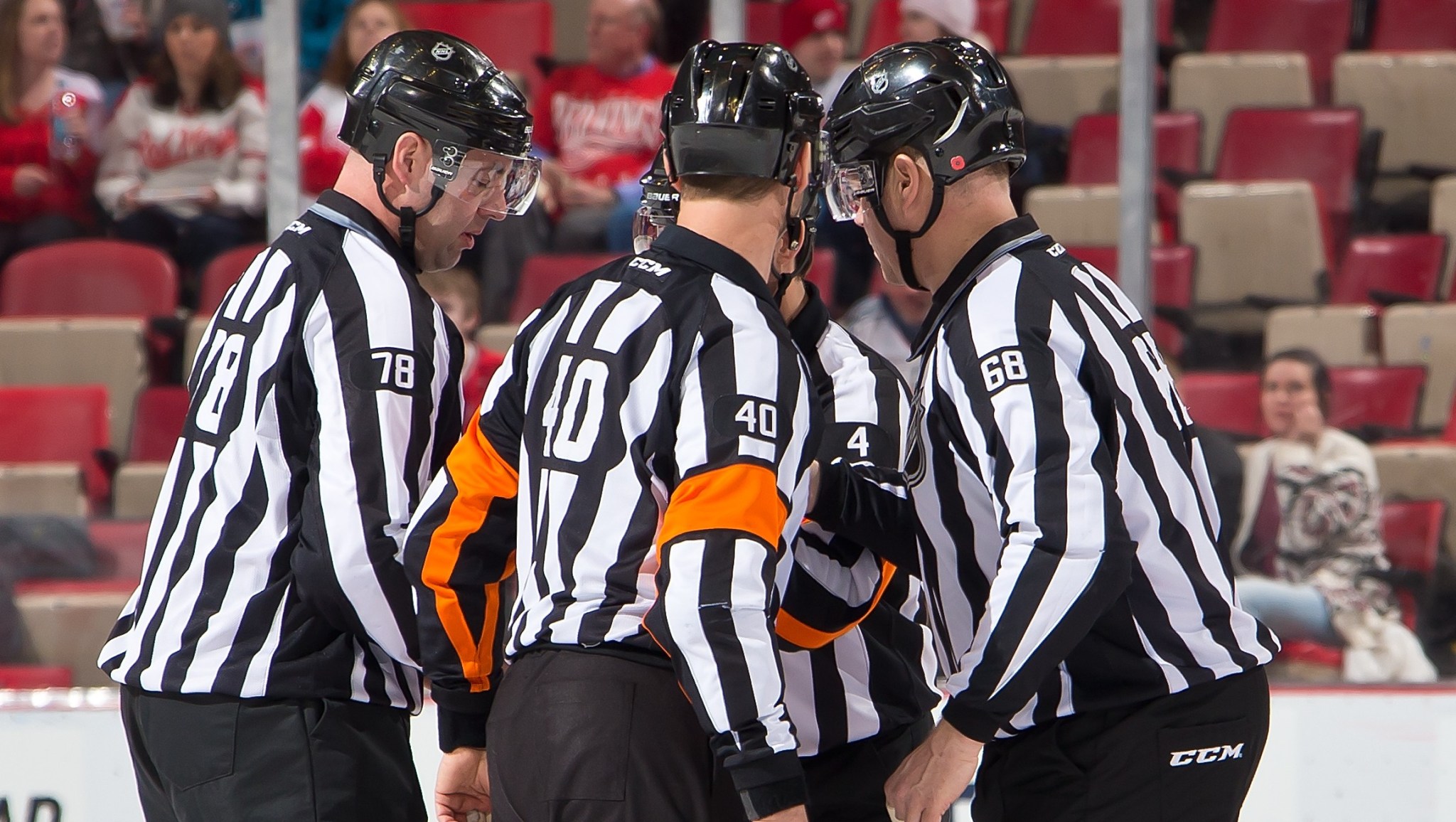 Canucks backup Eddie Lack is having a contest to design his next set of pads, and his injured teammate decided to enter. I can’t honestly claim to understand any of what’s going on here, but I feel like it deserves points just for effort.

Have a lot of time on my hands so I decided to enter @eddielack pad competition. I think I nailed it. pic.twitter.com/y5s5rzCEaB

We’ve already seen his impression of The Rock. Now he’s handing out Stone Cold Stunners to goalies. The super-kick through a pane of glass can’t be far away.

They were already on any reasonable list of hockey’s best fans, but spontaneously mocking the San Jose Sharks with a “Who’s your captain?” chant is one of the greatest things I’ve ever seen.

What Is the Hockey World Pretending Going to Pretend to Be Outraged About Now in a Year or Two?

The issue: The NHL seems set to finally adopt a coach’s challenge, just like we’ve all been demanding for years.

The outrage (once we’ve had a chance to see it in action): Wait, it doesn’t work all that well!

Is it justified? A coach’s challenge is a good idea, and if and when it officially goes into the rulebook, the NHL should be applauded. But as we’ve covered in this space before, while the overall concept is a solid one, the actual implementation will be trickier than it may seem.

For example, what specific calls do you allow the challenge on? Goalie interference? Other penalties, too? What about offsides? Do you limit review to plays that lead directly to a goal, and if so, what does “directly” mean? And who makes the final call: the referee or the league war room? Everyone seems to have a different view on the specifics of how things will work, so when the NHL nails down a plan, most people won’t like it.

There’s also the law of unintended consequences. For example, a failed challenge will apparently cost the team a timeout, but won’t be a minor penalty (like illegal stick challenges). That’s probably fine. But it likely wipes out the strategy of calling a timeout early in the game to settle a team down or rest tired players after an icing, since a coach will have to save the timeout for a challenge. Are we OK with that? You may be now, but when it costs your team a goal someday, you’ll feel differently.

There’s also talk of the officials having access to a tablet, so they can review the play directly, which sounds cool until you remember that this is the league that still can’t get wireless microphone technology to work. If NHL press boxes are any indication, expect the Wi-Fi signal to those tablets to work roughly 10 percent of the time.

The point of all of this, again, isn’t that the challenge is a bad idea. It’s better than letting a bad call stand. But it’s not going to be perfect, and fans who are hoping for a system that works exactly the way they want it to will be disappointed.

It was announced this week that the OHL’s Belleville Bulls will be sold and moved to Hamilton after this season, ending an era that began 34 years ago. If you’re a fan of junior hockey, it’s kind of a big deal. So for this week’s obscure player, let’s go with a Bulls alumnus.

That’s a pretty long list to work with, including stars like P.K. Subban, Jason Spezza, Al Iafrate, and even Gretzky.1 But let’s go with a personal favorite of mine: winger Rob Pearson.

Pearson’s NHL career got off to an odd start when he was part of one of the strangest drafts in NHL history. Back in 1989, the Toronto Maple Leafs managed to trade their way to three first-round picks, only to spend all three on Belleville Bulls: Scott Thornton went at no. 3 overall, Pearson at 12th, and Steve Bancroft at 21st. That led to plenty of jokes about whether the Leafs actually employed more than one scout.2

Initially, that Pearson pick looked OK. He went on to score 48 goals with the Bulls in 1989-90, before a trade to the Oshawa Generals made him Eric Lindros’s linemate for a season. He scored 57 times playing with Lindros, and you can imagine how that went over in Toronto. But once he cracked the NHL, Pearson turned out to be too slow to live up to his hype, scoring just 56 goals over a six-season career spent with Toronto, Washington, and St. Louis. He was a fun player to watch, though, since he was physical and had a knack for winding up in weird situations. Here he is fighting a goalie. Here he is falling for the ol’ fake glove-drop trick. Here he is almost getting thrown down a flight of stairs by a linesman at the old Chicago Stadium. The Rob Pearson era was fun.

The Belleville Bulls era was fun, too. Things won’t seem quite the same without them.

Wuest launched the site in 2009, building it up from a basic cap-tracking tool into one of the most indispensable web sites in hockey history. It stayed that away until January, when Wuest’s health forced him to shut the site down. Throughout the site’s existence, Wuest always shied away from the spotlight, rarely speaking to media and preferring to let his work speak for itself.

In recent weeks, there have been embarrassing attempts to indirectly diminish the value of Wuest’s work. But one look at the reaction to yesterday’s news demonstrates his impact, as a who’s who of respected hockey voices took time to express their condolences. It’s virtually impossible to get the hockey world to agree on anything, but the respect and appreciation for Wuest’s work was overwhelming, and deservedly so.

The main impetus behind the NHL’s incoming coach’s challenge is goaltender interference, which makes a lot of sense. Most times, contact with the goaltender is very subtle and can be easy to miss when it happens. This week’s YouTube clip does not feature one of those times.

• So it’s December 8, 2001, and the Flames are hosting the Mighty Ducks. Anaheim has just scored to go up 4-0 with just under five minutes left, so the game is basically over, or at least should be. But Calgary tough guy Craig Berube has other ideas, and they involve plowing into J.S. Giguere.

• Giguere barely notices the hit because he’s wearing his traditional Westinghouse refrigerator for pads, but the Ducks still have to respond. That response comes from Niclas Havelid, with one of the all-time great “Wait, it was a really bad idea to be the first one here” moments. The linesmen get in quickly, and it seems like they’ve got the situation under control.

• Berube gets a minor for charging and another for roughing, and that’s it. No misconduct, no game misconduct. Just two minors, adding up to four minutes. There’s just under five minutes left in this game. Hold that thought; it will turn out to be important.

• We skip ahead to a few shifts later, when the Ducks may be looking for some revenge. I’m sure they’ll be subtle about it.

• Yeah, not so much, as Kevin Sawyer runs Mike Vernon six minutes after the whistle, NHL ’94–style. And we’re off.

• The main event of Round 2 ends up being Jarome Iginla squaring off against Denny Lambert, who not only loses the fight but also winds up getting stripped half-naked in the process. I miss a lot of things about the NHL’s fighting era. I do not miss half-naked players. When I write my book about “indisputably dumb hockey things we all just accepted for some reason,” that chapter is going right between “Goalies Without Masks” and “The Loser Point.”

• By the way, I know this video isn’t the best quality, but given the ugly uniforms involved here, that’s probably for the best.

• OK, so just to get you caught up: The Flames ran a goalie to start a fight, and then the Mighty Ducks did the same. We’re even, right? Nope, not according to Calgary coach Greg Gilbert, who sends out another line of tough guys to jump a group of Duck softies. This round prominently feature Bob “The Boogie Man” Boughner, who wins his fight and then starts trash-talking the rest of the Anaheim roster. He apparently enjoyed yelling at a bench full of terrified players, because he went on to become a two-time OHL coach of the year.3

• Now we’re on to Round 4, in which we officially enter “fights between players who really don’t know how to fight” territory. That’s always fun. Give these guys credit — they at least manage to stay upright longer than Patrick Sharp and Jason Spezza.

• Round 5 features just one fight, but it’s a familiar name: future Cup-winning coach Dan Bylsma, who takes on Ronald Petrovicky. Other than that, not much going on here.

• After all of that, the teams finally manage to execute a faceoff without a fight starting, and play hockey for a good 40 seconds before Scott Nichol decides to mug Oleg Tverdovsky. That’s a mismatch, so Giguere jumps in, and you know what that means: Here comes Mike Vernon!

• OK, remember that part about Berube’s four minutes in penalties? They’re set to expire just before the game ends, but because they were coincidental, he won’t get to leave the penalty box unless there’s a stoppage. That leads to a crazy moment that’s not actually in this clip, but can be seen in this extended version. With time ticking down, Flames captain Dave Lowry gets the puck and just blatantly flips it into the stands. That stops the clock with 13 seconds left and frees Berube, who gets the “yeah, you’re staying on” point from Gilbert as all the Ducks pray that he’s not going to come stand beside them.

• Jeff Friesen ends up being the unlucky Duck, and immediately turtles. I’d make fun of him for that, except that if it were me, I would have skated off the ice, hailed a cab, and retired from hockey the second Berube made eye contact.

• We get one more minor scrum as the game ends, and that’s it.

The two teams ended up racking up 279 PIMs in the game’s final two minutes, all of which are thoroughly documented here. Berube, Nichol, Sawyer, and Gilbert were all suspended.

By the way, if “Craig Berube touches off a massive brawl by running a goalie” sounds familiar, it’s because we’ve covered one before. It was kind of his trademark. And today, guess who works for the most violent goalie of them all? Those hockey gods, they’ll get you eventually.