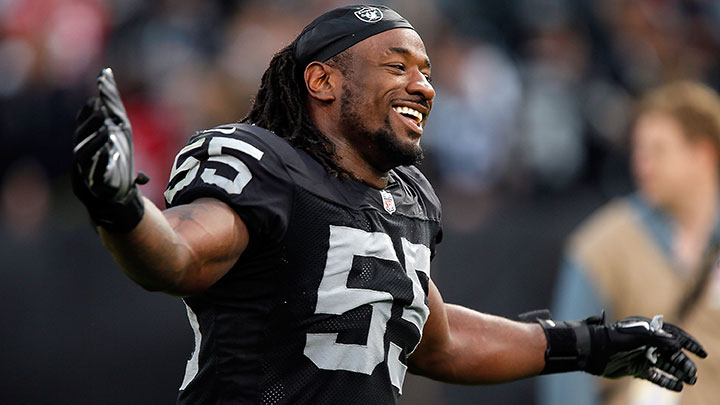 Who is he? Raiders outside linebacker Sio Moore!

Is that short for anything? Yep! Moore’s full first name is Snorsio, which he says means “God is the greatest.”

So what’s Sio mean then? “Greatest.”

His name means “greatest”? Does this guy have an attitude? It’s more confidence than attitude, and it’s the kind of personality that fits in perfectly with the Raiders. Here’s a quote from the 2013 combine: “You know, I like to play the game disruptive as well as everyone on my defense. We play with an attitude, you know? Like I tell everybody, when I go out and play football, I play pissed off.”

I wouldn’t be surprised if the Raiders moved him up two rounds on their draft board immediately after seeing that quote. I know I would have.

Where is he from? That’s a simple question with a complicated answer. Moore was born in Liberia but moved to the States as a child when a civil war in his home country began to escalate in 1990. He, his mom, and his sister bounced around the East Coast, spending the most time in Connecticut. After a friend was killed during his freshman year of high school, Moore realized that his life was getting out of control, so he moved to North Carolina to live with his sister and focus on football.

Woah. That’s a lot to take in. Don’t worry. Things have gotten better for the 24-year-old, and he’s having a solid sophomore campaign with the Raiders. Moore has played on 76.9 percent of Oakland’s defensive snaps and is second on the team in tackles this season. He also holds a share of the team lead in sacks, with three.

Moore and rookie Khalil Mack make up a young linebacker crew that’s brimming with potential for a Raiders defense that ranks just 22nd in defensive DVOA this season but has fared better against the run, sitting at 15th.

How’d he do as a rookie? Pretty well. A third-round pick out of the University of Connecticut, he was one of three linebackers named to the Pro Football Writers of America 2013 All-Rookie Team, along with Kiko Alonso and Alec Ogletree. Moore started 11 games as a rookie, giving the Oakland fan base hope that the franchise might be finally starting to get past its draft woes.

Does he have a high school highlight reel set to pseudo-inspirational music? Surprisingly not. Moore was just a two-star prospect, and only UConn and Temple recruited him. That’s about as under-the-radar as a player can get, which probably explains why Moore, who mostly played running back in high school, didn’t make it onto YouTube.

But don’t worry! If you’re still hungry for moving lyrics and want to get some amateur scouting done at the same time, you can check out his college highlights:

That’s great, but seriously: Why should we care about this guy? Well, Moore is a little bit of a loose cannon, which always makes for good fun. Three weeks ago against the Chiefs, Moore and Mack combined for a clutch third-down sack that should’ve all but put an end to Kansas City’s comeback attempt.

The linebackers began to celebrate a full 13 yards behind the line of scrimmage, but the Chiefs, desperate to stop the still-ticking clock, scrambled to line up for the next play.

Fortunately, Justin Tuck was able to call a timeout before the Raiders were flagged, but the two young linebackers still gifted the Chiefs an opportunity to regroup with the clock stopped. The Raiders held the Chiefs on fourth down, securing the team its first victory in more than a year, so no harm, no foul, right?

Well, has he had any other hilarious on-field episodes? Glad you asked! Moore is single-handedly reviving an Oakland–San Francisco rivalry that’s gone off the boil since the annual preseason game between the two teams was canceled in 2012 because too many fans were ending up in the hospital.

OK, so maybe saying Moore is renewing a rivalry is a bit of an overstatement, but he had some choice expletives for Colin Kaepernick during halftime last week, and the fun doesn’t stop there. After the Raiders won, 24-13, Moore took to Instagram to call Kap a “freakin chump.”

I don’t want to wait four years for Moore and Kap to meet again. Can we start a campaign to get Moore traded to the Seahawks?