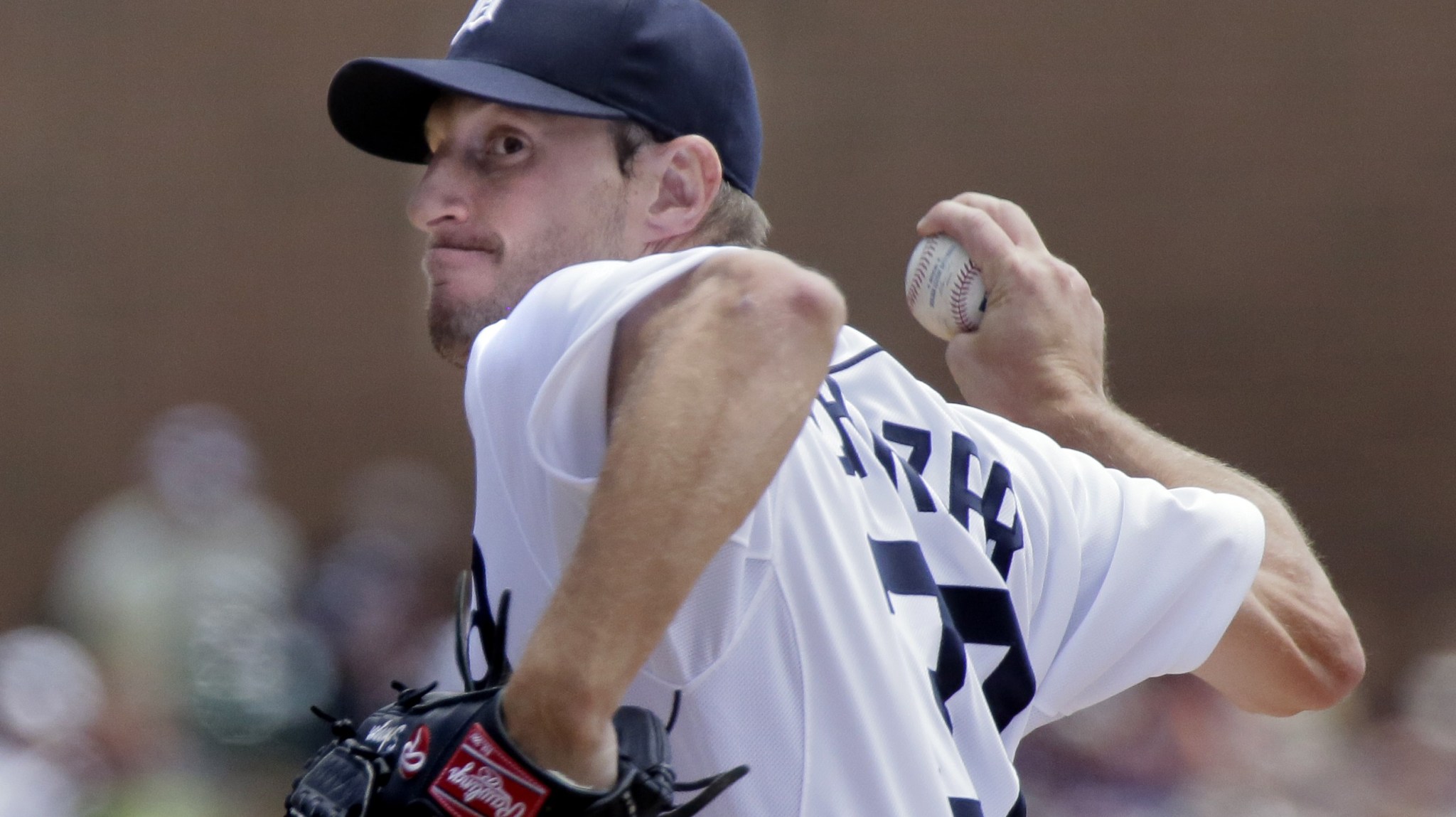 Dear World: Is it cool that we haven’t done a PitchCraft on the guy who is tied for the AL lead in wins and is tied for second in strikeouts, won last year’s Cy Young, and will probably anchor the staff of a World Series team?

OK. The world has spoken. A bit harshly, I think, but maybe it’s just the kick in the pants I needed. All Max Scherzer does is win games and strike people out, and that’s a combination that tends to succeed in this crazy game. So let’s seize the day and take Mad Max down that ol’ PitchCraft road.

Scherzer is a one-fastball man, and though I believe the lack of variety limits him (read the “Style” section for more), you have to tip your cap to the pitch itself. He can throw it on all counts, as a setup, catch-up, or strikeout pitch, and the .244 opponent average puts him safely in the top half of MLB pitchers. He keeps the four-seam belt-high, and the strong tailing action means it often ends up on the right corner. He’s lost a little velocity over the past three years, but it doesn’t amount to much … at least not yet. And that he maintains the league’s second-highest strikeout rate despite throwing one pitch more than half the time tells you how good that dominant pitch can be.

Scherzer had 14 strikeouts in his eight-inning, zero-run start against Pittsburgh earlier this month, and since he used almost every pitch in his repertoire to stymie the Pirates, we’ll be using GIFs (almost) exclusively from that game. Let’s begin with the first batter, Gregory Polanco, and see how Scherzer used his four-seam twice to turn a 1-1 count into a strikeout:

He begins by painting the outside corner:

And then comes inside, and lets his natural tailing action bring the ball back over the plate:

Against the very next batter, another lefty in Travis Snider, he uses a different tactic from a 1-1 count. It begins the same, with a pitch that clips the outside corner:

Instead of coming in on Snider as he did on Polanco, though, he goes back to that outside corner, knowing the last pitch will be in Snider’s head. This time, he starts it farther outside, so that by the time Snider swings, it’s off the corner, and the swing turns into a flail. Notice the spin and movement on the slo-mo:

The remarkable thing about Scherzer’s changeup is how much it drops — best in baseball — in comparison to how little his straight fastball drops. This contrast, as well as how it plays against his slider (see below), makes Scherzer’s change the fulcrum of his repertoire. It’s such an exceptional pitch by the movement numbers that his opponent average/slugging line (.221/.337) is almost disappointing, even though it’s really, really good.

Even without Felix-level proficiency, though, it’s super pretty to watch. Back to the Pirates, and the second inning, when Henderson Alvarez found himself with a favorable 2-1 count, only to get two helpings of what might be the game’s nastiest changeup. The first was low and away:

And the second was lower and away-er:

For kicks, here’s what it looks like against a righty, when Scherzer starts it on the left side of the plate and lets it ride across the middle:

While Scherzer is comfortable throwing his primary off-speed pitch, the changeup, against righties or lefties, it’s a different story with the slider and the curve. You could almost call them platoon pitches, because the slider gets heavy usage against righties and almost nothing against lefties, while the curve is just the opposite. Scherzer has the seventh-best whiff-per-swing percentage among all starters, and the slider is a big reason why; only Kershaw gets a higher percentage of swings-and-misses.

But you’ll more often find him playing in the dirt, as he did against poor Polanco in the third inning after getting him on the four-seam in the first:

The slider blends beautifully with the change — same speed, same drop, but moving in the opposite direction. Before the curve came along, Scherzer would platoon between the two, essentially becoming a two-pitch pitcher. In fact, the success lefties had against him in 2011 when he tried to throw the slider probably explains why the curve came into existence the very next year.

Scherzer’s curve has very little drop compared with the other 79 starting pitchers who throw a curve, and that may explain why he’s hesitant to use it against righties; less drop means it’s easier to track, and a ball moving away will never handcuff you. (But maybe he should reconsider — since he developed the pitch in 2012, Scherzer’s curve has been seriously devastating against right-handed hitters.) The curve doesn’t produce a ton of strikeouts, and the whiff percentage is low for an off-speed pitch, but it elicits a lower opponent average and slugging (.207/.293) than any other pitch in his arsenal. The zone profile shows that against lefties, his two hot spots are outside-middle or inside and low. The goal here, it seems, is to induce weak contact, and because there’s very little drop, it won’t surprise you to learn that he gives up the second-most fly balls (per ball in play) among all starters. More evidence that this isn’t your typical strikeout pitch: He’ll throw it early or late in the count, as long as the batter isn’t ahead.

Here’s an example of the curve thrown for a strike early in the count (in this case, the first pitch):

It’s exceedingly rare, but not totally absent, in situations where the batter is ahead (my guess is, Scherzer wanted to sneak this one in for a surprise strike, and was hoping Snider wouldn’t even swing):

And here it is against a righty, which, again, is very uncommon, usually comes with two strikes, and usually ends up down and away, which is where Alex Avila sets up before Scherzer surprises him by missing the target:

OR ARE WE? Because if there’s one thing Scherzer could use in his repertoire, it’s a fastball that looks a little different from his four-seam. Between the slider, curve, and change, his slow pitches blend incredibly well, but in the heater category, the four-seam is the only game in town. It works just fine, due to the speed and movement, but will it continue to serve him as he heads into his thirties and inevitably loses velocity? There’s a reason almost every elite pitcher in baseball1 has at least two fastballs in his arsenal — the second fastball presents another unpredictable element to the batter, and bolsters every other pitch — but Scherzer’s profile looks more like Stephen Strasburg, another four-seam heavy, high-strikeout guy who tried and failed to develop a sinker. Scherzer too tried and failed to develop his sinker in 2012 (the same year, by the way, he developed a curve, a project that met with far more success). It’s not that these guys failed to understand the need for a second fastball — it doesn’t take a genius to imagine the potential of a Scherzer sinker with fastball velocity and changeup movement — it’s just that they couldn’t quite do it.

Both pitchers are immensely talented, but neither one is likely to have many seasons with an HR/9 rate that drops much below 0.75 (compare that with the league leaders), and an ERA below 3.00 will be the exception rather than the rule. Still, if “perennial top-15 pitcher with A+ strikeout material who already won a Cy Young even if it was slightly dubious” is your ceiling … that’s not a bad place to be.

The Unlucky 13: The Most Pivotal 2014 Injuries for MLB Playoff Contenders