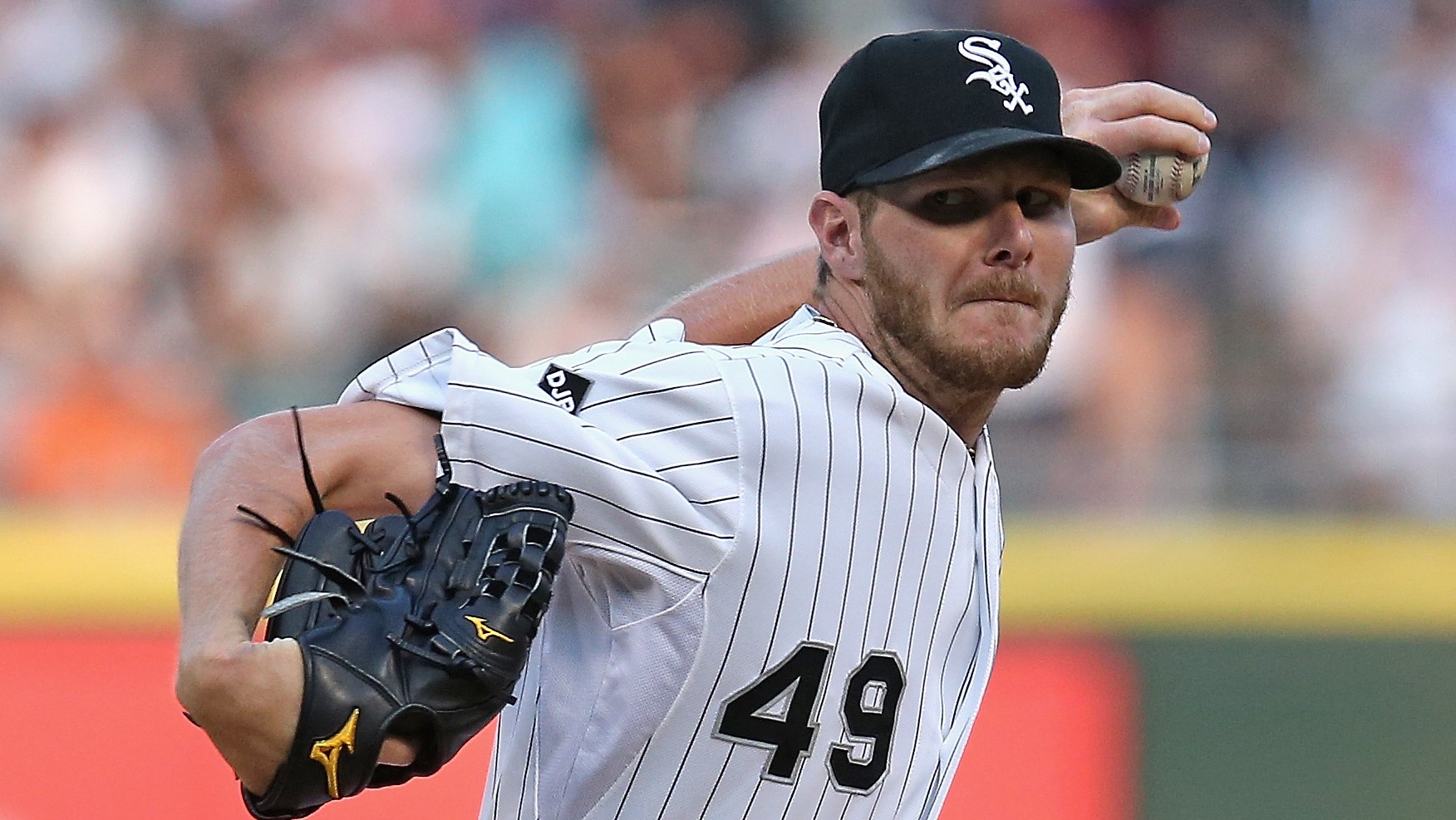 MLB 2014 scenario: A top young pitcher suffers an early injury, hits the DL, returns in May, totally dominates, and quickly puts himself back in the Cy Young race.

If you asked 100 baseball fans to name the mystery player, 98 of them would say Clayton Kershaw, and they’d be right. What they’d miss, though, is that the same exact narrative is playing out over in the AL in the form of 25-year-old White Sox ace Chris Sale. After going down in April with an elbow injury, Sale returned with a vengeance, rolling up a 10-2 record and a 2.14 ERA, as well as one of the top five WARs in the game (as with Kershaw, that’s an insane feat when you consider that WAR is a cumulative stat and Sale has far fewer innings than most starters). There’s a reason his name was brought up in a joking text from Tigers GM Dave Dombrowski to Billy Beane during the trade deadline madness:

Re: Price to Tigers, Beane “had a feeling it was going to happen.” Dombrowski jokingly texted, “You have 1 minute to acquire Chris Sale”

Sale gets less attention than Kershaw, though, since he’s never won a Cy Young and since — let’s face it — King Felix probably has this year’s AL prize on lockdown. Nevertheless, he’s one of the game’s best, and it’s time to PitchCraft the man.

(Our usual GIF-related thanks go out to Pitcher GIFs, a great follow for all your pitching needs.)

Here’s something you’re going to read over and over again in this article: Chris Sale gets excellent horizontal movement on this pitch. Best in baseball, to be specific, by two and a half inches. Before we move on, let’s take a look at exactly what it means when your fastball moves almost a foot from right to left. Envision the possibilities: Could you start it inside on a righty, make it look like it’s about to hit him, and then paint the inside corner?

Could you run it up the ladder with 95-plus speed, letting it tail outside until it’s practically unhittable? Yep:

Could you start it up the middle and end up painting the outside corner? Yup:

It’s one of the best weapons in baseball, and one capable of producing strikeouts and inducing weak contact, depending on the situation. It’s not super common to see a pitcher use a fastball as a setup and strikeout pitch, but Sale’s usage numbers show he’s consistent across counts, with a top-10 put-away percentage. Hitters are batting .238 against the fastball, which is in the top fifth of all starters, and if there’s a weakness to this pitch, it’s that the line drive percentage on balls in play is relatively high, a product of Sale’s tendency to let the ball ride up in the zone.

For comparison’s sake, let’s go back to Felix Hernandez, who won the coveted Fastball of the Year prize at the Midseason GIF Awards. Check out his zone profile, and notice how rarely he leaves a fastball above the middle fifth of the strike zone. Now see Sale’s, which shows a much wider range, and far more frequency high in the zone — especially in the center. Hernandez’s high pitches, you’ll notice, are usually out of the strike zone, implying that they’re purposeful waste pitches. Sale is dealing with more velocity than Hernandez, and to be fair, sometimes the high heat works for him:

Then again, sometimes it doesn’t. For one last comparison, Sale has given up 24 line drives and 23 hits on fastballs in the middle fifth or higher in 122 innings. Hernandez has given up nine line drives and 11 hits in 173 innings. Don’t get me wrong — Sale’s numbers are still really, really good. But there’s a difference between really good and great.

It’s a bit of a revolutionary year for Sale’s changeup, which began in 2010 as a rarity he’d use once in 20 pitches, grew slowly over the next three seasons, and then exploded to become his second pitch in 2014. As the Chicago Sun-Times notes, usage rates for his changeup and slider have flip-flopped this year, which should help preserve his arm as he enters his late twenties. Like his four-seam, the changeup gets the most horizontal movement in baseball by almost two inches, offering the same “hey-it’s-over-the-plate-oh-god-no-it’s-not” effect. More terrifying still, the relative drop compared to his fastball adds a nasty vertical element. It’s essentially impossible to catch up with this pitch because it tails so far to the left, but even if you manage to time it out, it’s probably going to dip below your bat. No surprise, then, that it’s produced a .181/.258 line, or that he uses it extensively on favorable counts against right-handed hitters. When hitters do manage to put the changeup in play, the line drive rate is third-lowest in baseball at 13 percent, better even than King Felix.

Let’s check it out in action. First, watch it tail away against Delmon Young for a strikeout, and notice both the insane sidespin he puts on the pitch upon release, and the way the ball almost seems to shift directions halfway to the plate. Young is left helpless:

Later in the same game, J.J. Hardy flails his bat at the pitch, but the drop is enough to punch him out as well:

Before we get into the nuts and bolts, you have to see this slider from the 2013 All-Star Game:

Weird fact: That pitch broke so much that it ended up in the 2014 All-Star Game.

There’s not much to say about Sale’s slider, because it’s just pure devastation. Batters are putting up a .127/.190 average/slugging line against the pitch, it has top-10 horizontal and vertical movement, and the only superior slider in the AL belongs to Corey Kluber. The pitch usage numbers show that Sale uses it far more against lefties (36 percent of all pitches, compared to just 13 percent against righties), which makes sense when you consider that a pitch tailing away from the batter (and sometimes starting at their bodies) is more difficult than one that breaks toward the bat. With two strikes against lefties, Sale uses the slider more than 50 percent of the time. Location-wise, it’s almost always low and right, though he’ll occasionally sneak one over the middle for a called strike.

Here he is throwing the slider for a strike, which is actually a bit more common against righties:

This is an interesting pitch in that it can be tough to qualify. The horizontal break is roughly the same as the fastball, as is the velocity, and the only way to differentiate it is by vertical break, which is a matter of about three inches. Normally, that would be enough, but when you go pitch-by-pitch you find that it’s a sliding scale, and when that vertical break splits the difference, how do you mark it? What we know for sure is that Sale definitely throws both types of pitches, so it’s worth trying to differentiate. Brooks Baseball’s game logs show that, for some reason, Sale tends to throw far more sinkers at home than on the road, and it’s hard to know if that’s a real phenomenon or some kink in the Chicago measurements. In any case, the pitch is an awful lot like the four-seam in that it has good velocity and the best tailing action in the game. The biggest differences are the drop, which is top 10 in MLB, and that he mostly uses it early in the count, especially on the first pitch, with usage dropping way off with two strikes (largely explained by the low whiff percentage, hovering around 5 percent).

Check out this sequence to Miguel Cabrera, when Sale was in a very dangerous 3-1 count and used the sinker to escape. First, he paints the outside corner low:

Next, he goes high, but watch how the sinker drops along the way, ending up just above Miggy’s belt as he swings over the pitch. It’s a pretty brilliant tactic against one of the game’s best hitters:

This is nitpicky to the extreme, but it may be possible that Sale’s “stuff” is better than his production. That sounds crazy to say about a top-five pitcher with an ERA that’s one good start from dipping below 2.00, but his movement is just that good. His long, thin scarecrow arms also create the unsettling effect that the ball is on you faster than usual, due to a later release point (I bet he’d be awesome, and annoying, at beer pong). With his jerky delivery, health is always a concern, but if he can stay on the field, it’s possible he’ll become smarter with his pitch selection and be able to induce more ground balls and fewer line drives (in my fantasies, Sale develops a 92 mph cutter that drops like his sinker and changeup). Even if he stays exactly the same, though, he’ll be a top AL pitcher every year, and likely a Cy Young winner before long.