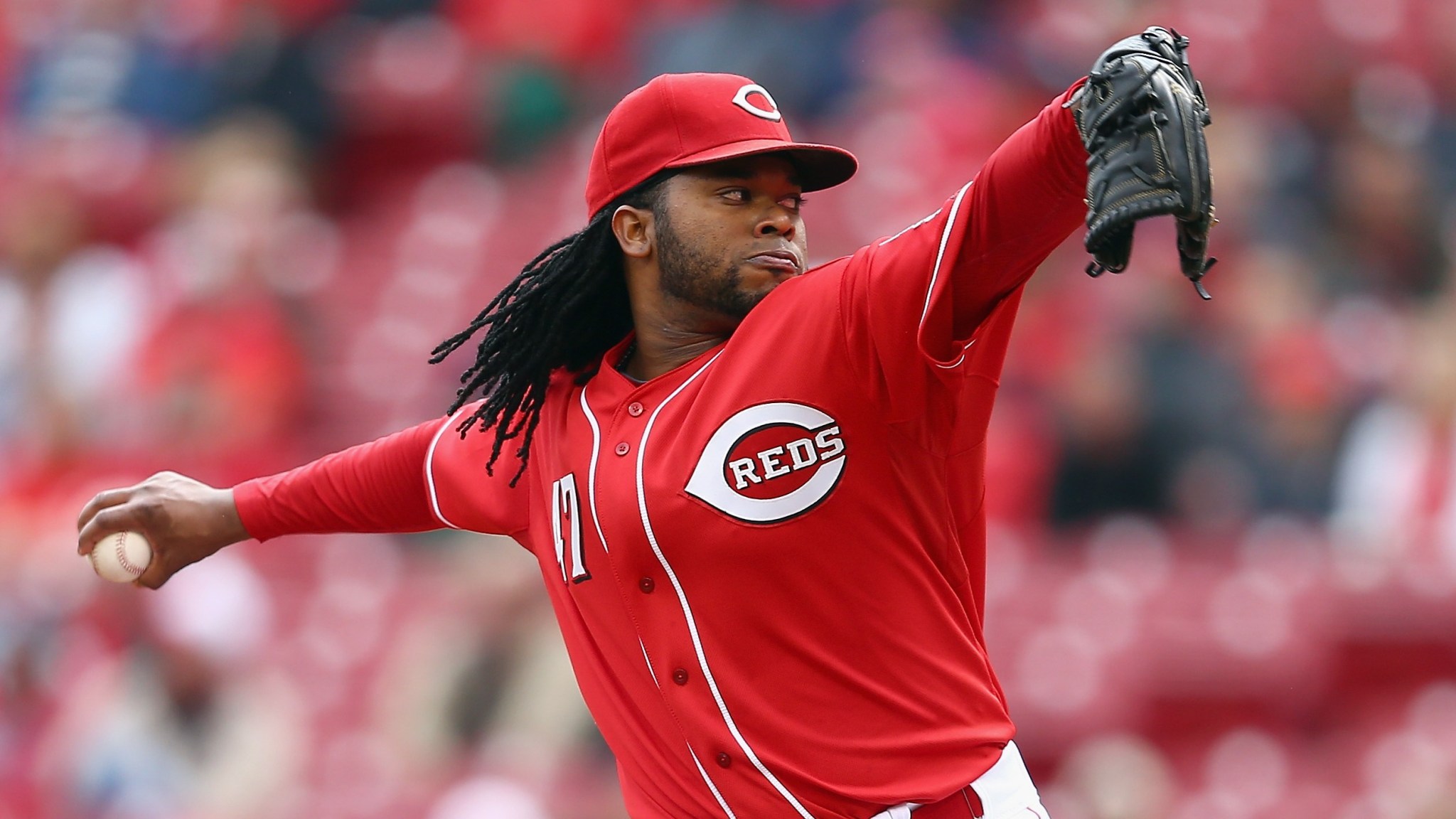 There’s a really easy argument to make right now: Cincinnati Reds ace Johnny Cueto is the best pitcher in baseball. After Thursday’s complete-game shutout against the Padres, he leads the league with a 1.25 ERA through nine starts. That’s a staggering number — even when you consider the limitations of ERA and the small sample size —and it’s a tribute to how effectively he’s stranded runners this year:

Three base runners have scored on Johnny Cueto this year. Three. #Reds

Not bad, Johnny. Perhaps unsustainable (along with that league-best .160 BABIP), but still really impressive. So how does he do it? Let’s dig deep and try to unearth Johnny’s secrets in the first installment of PitchCraft.

(As always, a huge thank-you to PitcherGifs, a terrific site for any baseball fan, and a great Twitter follow.)

The four-seamer may be known as a “straight fastball,” but while Cueto’s stays higher than usual, it breaks in on right-handed hitters. It’s hard to find a true distinguishing factor when you compare its movement, velocity, ground ball and line drive rate, etc. to other four-seam fastballs, but by Fangraphs’ measurement, it’s the most valuable pitch in baseball. That’s evidence that we need to look at how Cueto is maximizing his natural speed and movement with intelligent usage.

An important thing to know about Cueto is that many of his pitches blend into one another, and can be difficult to differentiate if you don’t know how he’s holding the ball. For example, his sinker is the same speed as his straight fastball, and averages three inches more break to the right, and three inches down. With the variability of each individual pitch, it can be hard to tell which is which; for example, if a fastball breaks seven inches in and eight inches up, did he throw a four-seamer with above-average movement, or a sinker with below-average movement? There’s no easy answer, but like the four-seamer, this is the best pitch of its kind in baseball, and also like the four-seamer, the leaderboards tell us very little about why it’s so special … except that it has the third-lowest line drive rate in the game, which is another nonspecific way of saying “it’s really good.” Check out the pitch in action as he paints the outside corner:

You’re probably starting to get the sense that Cueto predominantly throws fastballs of one variety or another. Like most pitches with a good cutter, his is effective insofar as batters are expecting the ball to break in and to the right (since it looks like a normal fastball), and instead, it largely stays straight. Watch how Ian Kennedy jumps back off the plate, thinking the ball will run inside on his knees, as the pitch breaks back over the plate for a called third strike in Wednesday’s game:

This is the only pitch that’s easy to identify in Cueto’s arsenal, because unlike the slider and cutter, it moves in on right-handed hitters. It’s his best “whiff” pitch (21.5 percent), and gets the ninth-most swings and misses of any changeup in MLB.

That 10.92 percent usage figure is for all of 2014, but Cueto throws this pitch less and less all the time. Brooks Baseball has a great stat called “grooved pitches,” and you can see here how the slider was essentially the only pitch Cueto was grooving with any regularity in March and April. Result? He’s throwing it a lot less in May (and grooving a lot less, too). Against San Diego, he only threw three sliders, but it’s still a pretty pitch when thrown effectively:

Considering the rest of his arsenal, there’s really no need for Cueto to throw a curve very often, and at this point it has become a novelty pitch, appearing once or twice per game.

Despite being incredibly stingy with baserunners, Cueto is allowing a home run every nine innings, and so far, it’s how he has given up most of his earned runs. If he gives up a fly ball, there’s almost a 15 percent chance it’s leaving the park, a stat that puts him in the bottom 35 in MLB. Also, there’s that aforementioned super-low BABIP (batting average on balls in play), which is usually a reliable measure of good luck, and which can’t last forever.

Cueto is a master of sowing discomfort in a batter. Everything from his twisting wind-up, his blended pitches, and his fast pace (21st-fastest among starting pitchers) is designed to confuse and unsettle. As you might guess, he’s excellent at mixing his pitches. This goes for his entire repertoire — as we see from his tabular data, a batter never has more than a 37 percent chance of guessing what pitch he might see on any count, and usually much less than that — but also when he’s using the same pitch.

Let’s take a look at a couple of at-bats from Wednesday’s game.

Here, Cueto started Gyorko off with three straight four-seam fastballs, all between 91 and 92 mph and with about five inches of horizontal break. That doesn’t tell the whole story, though; despite surface similarities, the placement of the pitches effectively changed Gyorko’s eye level. The first was low and outside, nibbling at the corner, preparing Gyorko for the second pitch, which was higher. With Cueto’s right-to-left action, it’s no surprise that Gyorko thought it would be outside and let it go when it came in for a called strike. Cueto went back to the well for the third pitch, knowing Gyorko would have trouble laying off the same pitch even if it looked outside, and the risk paid off with a swing and miss. That set the batter up perfectly for the coup de grace: After watching two straight high pitches that cut into the outside corner, the worst thing Gyorko could see was a cutter inside and middle — he flinched as though it would tail in to his legs, as we saw above with Kennedy, but instead it grazed the inside corner for a strikeout looking … or, in this case, gaping:

2. Sixth Inning, vs. Will Venable

Venable, to that point, had a very successful career line vs. Cueto: 6-11, 2 HRs. Cueto tried to get him to chase changeups on the first two pitches, missing badly with the first and failing to induce a swing with the second. In a 2-0 hole, against a batter who had his number, Cueto needed something better than a straight fastball, and went to the cutter to induce a foul. Next, still in a 2-1 hitter’s count, he came inside to Venable (a lefty) with a beautiful low four-seamer that nipped the corner at the knees. The batter had yet to see anything but low pitches to that point, so Cueto’s next move was a high changeup. It almost worked, but Venable managed a foul with a late swing. That set Venable up for the 2-2 sinker, which started high before darting down and right — eight inches right. Notice where Bryan Pena catches the ball vs. where it started:

Those are just two examples of Cueto’s unique strength — using intelligence, variety, and unpredictability to transform good pitches into a great arsenal.