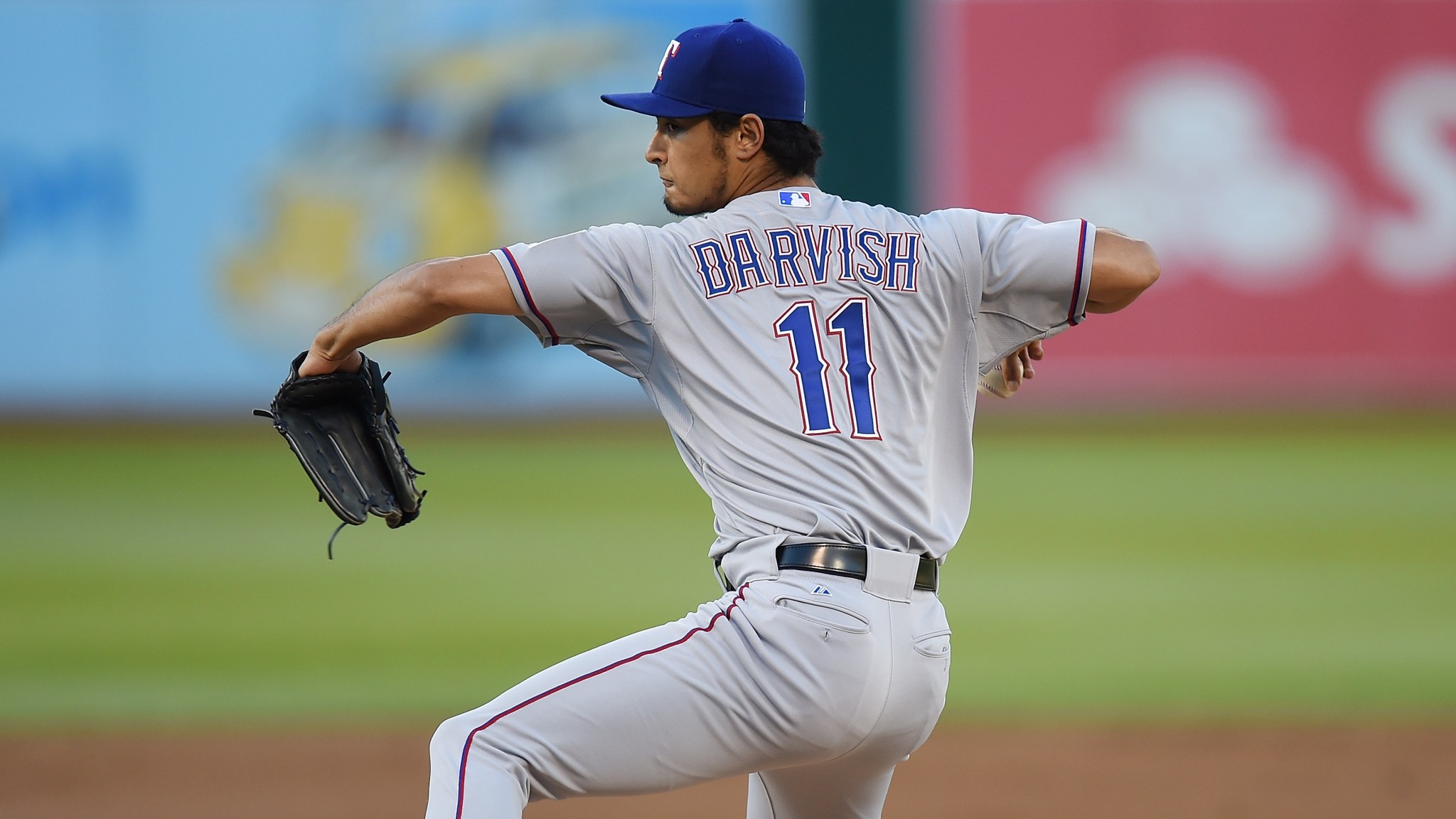 When I played Little League, everyone wanted to be a pitcher. You controlled the game, and the batter was at your mercy. It was wonderful to be on that hill, and even having a total breakdown and walking five consecutive batters before you got unceremoniously yanked was better than being stuck at third base. All of us, the talented and delusional alike, wanted to be there.

Where we differed was in our fantasies. While lots of kids wanted to be power pitchers, inspiring fear and whiffing batters with hissing fastballs, I was always the kid trying to throw screwballs and knuckleballs and sliders and even the elusive forkball, which I threw by gripping the ball awkwardly at its sides with my index and middle fingers. It was not effective — none of them were. But the point is, I didn’t dream of fastballs; I dreamed of deception, and variety, and surprise, and strategy.

For people with my temperament, Yu Darvish is like a long-awaited prophet. He throws eight pitches, a few of them very weird, and even though a language barrier keeps us from understanding his personality as much as we’d like, the creative genius is evident in his style. What’s more, it’s not just fanciful; it works. He leads MLB in strikeout rate, and he also averages almost seven innings per start, among the top 10 in baseball. He’s second only to King Felix in WAR, and he does it all with the 45th-fastest heater in the game. He’s a magician, and I love him. Let’s PitchCraft the man already.

Darvish’s fastball is unique for the fact that it flies relatively straight, especially on the horizontal axis. The meager two-inch break puts him in the lower 15 of baseball, but it’s a space he shares with the likes of Clayton Kershaw and Anibal Sanchez. He throws the pitch about 50 percent of the time, regardless of the count, with the exception of two-strike situations against lefties. In theory, batters should be able to wait on this pitch and not worry about everything else in his arsenal. So what makes it so effective? Why does it produce a .235 batting average against, with just three home runs and five doubles in 598 pitches this year?

It starts with location, as we see from this scatter chart sorted for four-seams only. Darvish keeps it low — 51.18 percent of all his fastballs are in the lower third of the zone or below the zone entirely. Include the middle of the zone, and that number goes up to 72.56 percent. But it’s about more than vertical placement; look at the percentages again, and notice that he doesn’t hit any of the nine “strike” areas more than 6 percent of the time. There’s no predictability there, and that’s obviously a strength.

The result is a very low swing rate — 37.96 percent — and very few balls in play. Just 90, actually, of the 598 he’s thrown, and less than 30 have gone for line drives. For a setup pitch — and that’s what it is, because Darvish can kill you in seven different ways — those are terrific numbers. Check out the GIF and you’ll see how straightforward it looks.

This is the go-to strikeout pitch, with excellent sweeping, dropping action. Darvish may throw a straight fastball, but that’s about all he throws straight. Want me to sell you on this slider? I can do it in two sentences. One: It has the second-most horizontal break of any slider in baseball. Two: It has the second-most vertical break of any slider in baseball. We good?

Darvish likes throwing it to lefties on two-strike counts, and he really likes throwing it to righties on two-strike counts. It’s an incredible nasty pitch, and as you see from the zone profile, it ends down and left an inordinate amount, though he does occasionally like to sneak it on the outside (right) corner at waist level against lefties. Here’s the first variety:

And here’s one where he leaves it outside to a lefty, and the crazy drop does the heavy lifting:

Batters hit .169 against this pitch, and it’s earned him 40 strikeouts to just two walks.

Last week in Stephen Strasburg’s PitchCraft, I wrote at length about the necessity of blending your pitches, and reducing the sharp contrasts between them, to fool the batter’s instincts. This is a terrific blend pitch, moving at the same speed as the four-seam fastball but cutting five inches farther to the right and dropping three inches lower. As you’d guess, he gets more grounders with this pitch, a lower line-drive rate, zero home runs, but a good number of singles due to a ground ball’s tendency to find holes. It might be why Darvish threw fewer sinkers last year, though the numbers are back up in 2014. The sinker produces his lowest whiff rate and highest batting average against, and he never throws it with two strikes, but Darvish understands its purpose as a blend pitch — it’s a new look for the batter, setting up everything else.

Now, remember the sinker above, and how it tailed left to right to catch the outer half of the plate for a called strike? When right-handed pitchers are really good, that’s what they’re supposed to to be able to do. What you just saw in the cutter GIF above — doing the same exact thing with a 90 mph pitch on the other half of the plate — is goddamn insane. Sure, righties should get that kind of breaking action on a slider or a curve, but a fastball? Nope. That doesn’t happen.

As it turns out, the numbers back up my amazement — no right-handed pitcher gets that much right-to-left horizontal movement on a cutter, and only James Shields and Adam Wainwright are close. I don’t have to spell out how useful this pitch is, right? After dealing with the four-seam and the sinker, the batter is trained to recognize that a fastball breaks hard right. But when he sees “fastball” here, and it breaks left, it’s completely confusing. Watch again, and note how Jose Lobaton stares at the ball long after it’s in the catcher’s glove. It’s contrary to everything he was expecting.

Darvish only uses the cutter 11 percent of the time, but it’s incredibly effective, producing a .172 batting average against (fourth-best in the game) and yielding just four singles and three triples in 139 pitches while producing an extremely low 15 percent line-drive rate and 29.5 percent ball rate. Basically, this pitch produces a whiff, foul, or pop out almost 70 percent of the time. He loves throwing it on the first pitch to lefties, or when he’s ahead on righties, and for a low-volume pitch, it’s devastating.

The numbers aren’t as dramatic as the slider, and he doesn’t use it quite as often, but the movement on Darvish’s curve is still pretty incredible. More important, it produces strikeouts at a similar rate (17 Ks in 120 pitches), he barely ever leaves it high, and the batting average against is best among all his pitches at .147 (slugging average against is .177, a result of zero home runs and just one double). And again, it blends with the slider, moving just a few mph slower but dropping way farther. The big difference is that while Darvish loves to throw the curve with strikes on lefties, righties rarely see it at all … maybe because at the point when it’s hittable, it’s more in the power zone for righties?

Yep, how about a changeup, too, and one that travels just 5 mph slower than all the fastballs, but drops off a ledge?

This changeup looks just like the splitter that follows (more blending), and like that pitch, sees use almost exclusively against lefties.

Almost unnecessary, when you consider the rest of Darvish’s tools, but hell, of course he has a splitter. This one doesn’t break as much as the sinker, but it drops a bit more (weird, I know, but also pretty common). It’s a pitch that’s always been on the periphery of his arsenal since he came to America in 2012, and I’m probably not smart enough to know why he keeps it alive; I’d love to ask him, though. My one guess, based on the tabular data, is that it comes in handy with two strikes against lefties; that’s the only time he really throws it (the changeup gets used earlier in the count), and he’s managed to get eight strikeouts out of the pitch while having thrown it just 36 times this season. Maybe the dropping action, which almost always carries it out of the strike zone, makes it a better option than the sinker against certain hitters.

Here’s an example with extra sinking action from this week’s game against Oakland:

OK, FINE, Brooks Baseball calls it a “slow curve.” Great. Magic has vanished from our world forever, and life is a series of miseries building toward death. Wonderful. But you know what, America? Sometimes it’s important to believe in something. And I believe this pitch should be called an eephus, because “eephus” is awesome as both a word and a concept, and to hell with everyone who wants to take our freedom.

Sorry, I don’t know what came over me there. The point is, this pitch is rare and wonderful, used almost exclusively with two strikes, is both funny and humiliating, and, even though this stat is sort of meaningless, it has a vertical drop of 70 inches — that’s almost six feet — with gravity. Bless you, eephus:

Ummm … maybe if his four-seam fastball had more horizontal movement, it would produce a lower line-drive rate? But that’s incredibly nitpicky, and maybe also wrong — every pitch works in conjunction with the others, and a change in one might make the system less effective. Also, he walks far too many batters; of the top 25 in WAR, you have to go all the way to no. 21 to find someone with a worse rate. Otherwise, limitations are few and far between, and Darvish is exactly the kind of pitcher whose variety should keep him effective for years, even as his velocity diminishes as he enters his late twenties and thirties.

Here’s an interesting article positing that Darvish’s inconsistent release point, pitch volume, and history of injuries may make him prone to long stints on the DL. And now I’m just going to leave you with the wonder of this GIF, which made the rounds in 2012 and is no less hypnotic today: