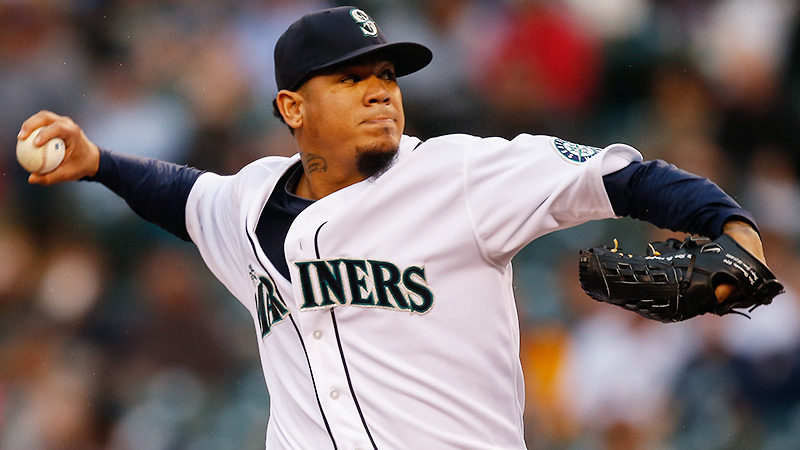 There’s a persistent pitching riddle that goes like this: Is it best to be a strikeout pitcher, ensuring a certain number of “free outs” per game but sacrificing a certain number of innings over a season because of elevated pitch counts? Or is it better to go deep into ballgames, striking out fewer batters and subjecting the team to the whims of BABIP, but chewing up more outs and easing the toll on the bullpen? That question presupposes a dichotomy, but should it? Is it possible for a pitcher to bring both strikeouts and endurance?

I’m a curious guy, so I compared two lists: the top 20 pitchers in strikeouts per nine innings, and the top 20 in innings pitched per start. It turns out there’s a healthy amount of overlap. Seven of the top 20 strikeout artists appeared in the endurance metric; three landed in the top five, with Johnny Cueto, Masahiro Tanaka, and David Price leading the way. Right on their tails, clocking in at sixth in endurance (seven innings per start) and 16th in strikeouts (one per inning), sits Seattle’s Felix Hernandez.

Cueto and Tanaka have already gotten the PitchCraft treatment, so it’s time to turn to the land of coffee and grunge to examine exactly how King Felix, perennial ace, 2010 Cy Young winner, and 2014’s current best Pitcher by WAR and FIP, protects his crown.

For years and years, this has been Felix’s bread and butter, and though the velocity has dropped off a bit since his early days, the effectiveness has not. Compare the details of the pitch to other sinkerballers, though, and you won’t find anything special in terms of movement or speed or batted balls. Students of PitchCraft will recognize this theme, and it’s important enough to emphasize: The location of a specific pitch, and the way it reacts in the context of the rest of the pitcher’s arsenal, is just as important as the “stuff,” i.e., the movement and speed. Uncertainty matters a lot, and though Felix’s speed and strikeout rates have given him a “power pitcher” reputation, don’t think for a second that he lacks in craft.

The sinker breaks in on righties and slightly down compared to his straight fastball, so let’s use that for a second and consider the optimal locations for that type of pitch. If he wants to produce a strike looking, he’d start the ball on the left; lefties would think it was going to hit them, while righties would think it was outside, right? Well, let’s check out two GIFs in which Felix employs exactly that strategy.

In this GIF from last season, Felix throws the sinker high and tight, and lefty Ryan Doumit seems to think he’s about to get hit by the ball. Instead, it breaks cleanly over the heart of the plate for an inning-ending strikeout:

And here’s an example from 2010 that shows what it looks like when the ball runs low and in, which is Felix’s preferred location for righties. The batter actually pulls his bat back because he thinks the pitch is too far outside, and then it runs over the inside corner.

Another key lesson at PitchCraft U is that pitchers who can blend their pitches so that there’s only a vague delineation between them tend to do well. If a batter can’t detect slight changes in movement and velocity, he’s unlikely to make solid contact. Enter Felix’s changeup, which at 90 mph is nearly as fast as the sinker, and cuts in on righties to a similar degree. To the batter’s eye, it moves in the same horizontal direction at the same speed, but what’s the difference? The y-axis vertical drop. At the same speed, the changeup would fall five inches lower than the sinker, and when you factor in gravity, the difference is closer to 10 inches. How good is that? Well, it’s the fastest changeup in baseball, with the second-most drop. In other words, it falls off the damn shelf, and it falls fast. Only Francisco Liriano gets more swings and misses with a changeup, and only Stephen Strasburg allows fewer fly balls.

The other great thing about Felix’s changeup — and here’s more evidence that he’s a master of location and command — is how different it can look based on the moment. Sometimes, as in this example, it has nasty dropping action but doesn’t seem to cut very much:

Other times, the cutting action is extreme:

And sometimes there’s a solid combination:

For batters, this represents a gross miscarriage of justice. Even if hitters could predict the changeup (and even if it didn’t look exactly like the sinker), they wouldn’t know exactly where it’s going. The only common denominator is its inherent nastiness. Little wonder that it’s Felix’s most common two-strike pitch, and that it’s become increasingly prominent over the years. One more stat before we move on: The batting average against is .110, the lowest of all of his pitches.

Here again, we have a pitch that embodies the concept of blending and unpredictability. The four-seam is nothing special on its own, but considered in the context of the sinker and the changeup, it gives the batter a third look: same velocity, similar vertical movement to the sinker (though it stays about two inches higher), but wayyy less tailing action. When all a hitter sees are 90-plus mph pitches that bend to the right, a pitch that goes relatively straight probably seems like a left-breaking screwball. Felix mainly uses the four-seam with two strikes to lefties, but here he gets an outside strike against Miggy Cabrera:

Here we have Felix’s first true “off-speed” pitch, though a changeup would traditionally fall under that category. You won’t be surprised to know that this pitch, along with the slider below, elicits a far lower swing percentage than the previous three, even though he throws them both for strikes at a similar rate. It’s a knee-bender, especially effective against lefties because of the horizontal break. It’s used as a surprise pitch, often early in the count, and when you see the GIF below, you’ll know why it’s so effective.

Felix’s slider is tighter than the curveball, with less horizontal movement but more speed, so it initially looks vaguely like a sinker or changeup. It’s the opposite of the curve, in that he throws it almost exclusively to righties, but it still mostly comes on the first pitch. It drops at the fifth-best rate among all sliders, and produces the best ground ball rate. In the GIF below, you can see how much the pitch looks like a curve, especially if you didn’t know what Felix’s actual curve looked like.

Playing for the Mariners.

(If you look up his run support numbers from past years, or his 13-12 record in his Cy Young campaign in 2010, you’ll see I’m not just being snarky. Although that’s a big part of it.)

Almost all of his pitches drop, which means he’s always among the league’s best in home run rate. He currently owns the 11th-lowest walk rate among starters, in no small part because when he does throw balls, batters swing more than a third of the time. (Again, his control is outstanding.) Mechanics-wise, he delivers quickly out of the stretch, and takes a slight, but not unusual, hesitation out of the windup. When his body lands, his shoulder is still tilted backward, a trait he shares with other power pitchers like Justin Verlander. Otherwise, Felix is just your standard once-in-a-generation talent.