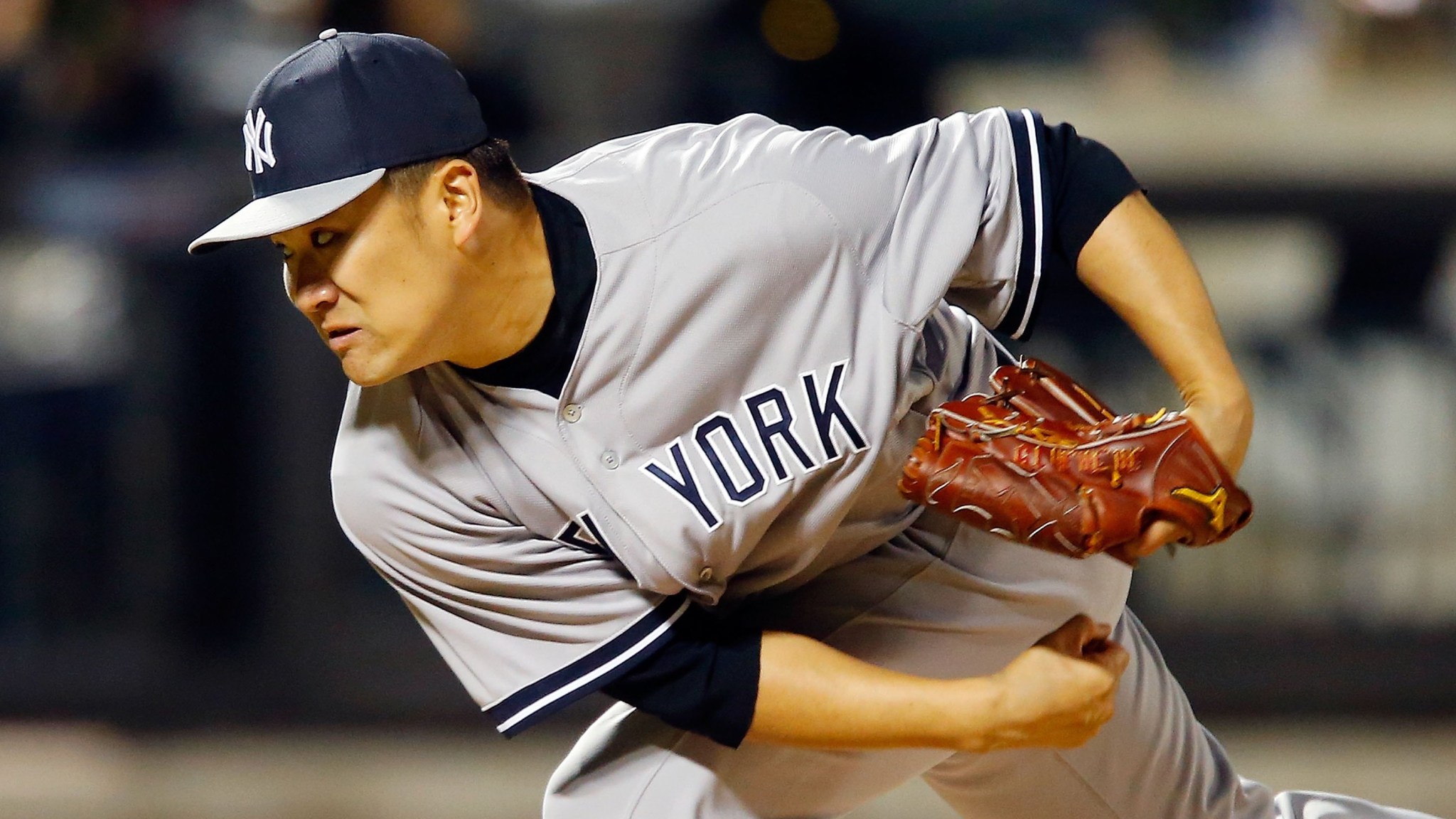 With the sad news that Jose Fernandez is out for the year, Yankee rookie Masahiro Tanaka is now the MLB leader in strikeout-to-walk percentage, which is as good a way as any to sum up his dominance in a single stat. In his first year in America, Tanaka has lived up to the hype and then some, racing out to a 6-1 record with a 2.39 ERA. He rarely walks batters, he accumulates strikeouts at an incredible rate, and he’s a top-five pitcher by WAR after two months. The Yankees are currently treading water at the top of the AL East, clinging to a winning record despite a negative run differential, and without Tanaka, they’d already be sinking. At 25, he has become the most valuable player on a team weighed down by awful contracts and aged (not even aging, anymore) stars.

How has he done it? Let’s dig deep and give him the PitchCraft treatment.

(Big thanks as always to PitcherGifs, your best source for — you guessed it — awesome pitcher GIFs.)

(All velocity, movement, and usage stats from Brooks Baseball)

Ahhhh, the splitter. Quite simply, this is one of baseball’s best pitches. A look at the Baseball Prospectus leaderboard tells part of the story — it’s the second-fastest splitter in the game, has the fourth-best vertical drop, produces the second-most swings, the third-most whiffs (50 percent of all swings), the sixth-lowest line drive rate, and the best grounder-per-ball-in-play rate. All impressive, but consider this: With 235 splitters thrown this year, Tanaka leads the majors. While the splitter is a novelty for most pitchers, hitters are expecting Tanaka’s version, and they still can’t do anything with it. The reason comes down to the first two factors mentioned above: It’s fast as hell, and it drops like crazy. Those two elements are not supposed to work in tandem, and the way Tanaka makes the ball move while throwing faster than even other splitter studs like Hisashi Iwakuma and Tim Hudson is positively freakish. Check out what it does to Boston’s Mike Napoli:

Here it is in slow motion against L.A.’s Erick Aybar:

Things that shouldn’t be surprising now that you’ve seen those GIFs: He throws it almost half the time in a two-strike count, Fangraphs has it as the most valuable splitter in baseball by a good margin, he has the fifth-best strikeout rate in baseball.

On paper, this is a relatively straightforward fastball, but it has to be considered in the context of his splitter and sinker. With a pitcher like Tanaka, who possesses an array of fastballs, it’s all about the subtle differences, and the four-seam has been effective for him because it looks just like the splitter but stays about nine inches higher and goes 5 mph faster. The way he uses it is interesting — against righties, he loves to throw it on the first pitch or when the batter is ahead, which is what you’d expect from a traditional straight fastball. But against lefties, oddly enough, it mostly comes out with two strikes, and rarely makes an appearance earlier in the count. One reason for this might be that with the left-to-right movement, lefties have to chase. If they’ve already been conditioned to look for sinking pitches like the splitter, sinker, and slider, it’s very easy to swing under a pitch that’s very fast and stays higher. Watch Cesar Hernandez do exactly that on a two-strike fastball in spring training:

If Tanaka’s fastballs were the Gorgon sisters from Greek mythology, the splitter would be Medusa, turning batters to stone, the four-seamer would be Stheno (the mighty), and the sinker would be the lesser-known Euryale, whose names translates to “far-roaming.” She was the wild card, the unsettling Gorgon that made Medusa so effective. Like Euryale, the sinker roams far afield, breaking a full eight inches in on righties. It’s not as dramatic as the splitter, but because it has more horizontal movement, it’s the perfect setup for the money pitch. The tabular data tells the story: The sinker is mostly used against lefties, and mostly early in the count, on the first pitch or with the batter ahead. The lefty chases the outside pitch, watches it run away, and is now trained to be wary. So when the splitter comes, and it’s clearly not breaking the same way, the hitter’s eyes light up and he swings just before the bottom falls out.

Oh, but it can work against righties, too. We’ll head back to his Japanese days to check out a sinker GIF … notice how far right the pitch breaks, as compared to the predominantly dropping action of the splitter:

Hey, batters, here’s your challenge: 60 percent of the time, you’ll be facing a fastball that tails right either four inches or eight inches (good luck guessing!) and could end up in one of three vertical zones separated by about six inches each. All of them travel the same speed. You accept? OK, great, because one more thing: Every five pitches, after your eye has been trained to look for those fastballs, we’ve got a little surprise: A pitch that breaks left! Fun, right? Oh, and it drops like crazy. And it looks just like a fastball, except it’s just slightly slower, giving you that crucial second to swing ahead of the ball that you were going to miss anyway. And — hey, where are you going? Are you crying?!

This is my favorite GIF of the bunch, just because Carlos Gomez manages to lose his helmet and nearly fall over after swinging. I think that means it’s a sweet, sweet pitch, and that Gomez needs more kiwi-based potassium:

Rarely used, and when it is, it’s almost exclusively as a first-pitch surprise designed to steal a strike looking. It’s not necessarily a great pitch, but the way Tanaka uses it works well: Batters only swing 19.3 percent of the time, an incredibly low number, and he throws the pitch for a strike on 46 percent of those non-swings. It’s a novelty, but a good one.

In theory, this would be a pretty killer fourth fastball for Tanaka’s repertoire, because while it looks similar speed-wise and vertically as the sinker/splitter/four-seam, it tails to the left. In practice, though, he has given up a high rate of line drives with the pitch (67 percent in May, which is not great) and hasn’t quite mastered the control. When it works, it’s great, but the command isn’t quite there yet. Check out a spring training example against Dominic Brown; you can see that Brown is fooled by the movement, moving back when it doesn’t tail right like he expected, but Tanaka couldn’t quite hit the inside corner:

He supposedly threw one changeup this year, against the Brewers on May 9. It was 88 mph, so its was probably a splitter gone wrong. Glad we had this discussion.

Early on, there aren’t many. Tanaka’s variety and movement seem to safeguard him from the fate of other foreign pitchers who fizzle out when the novelty wears off. His eclectic repertoire invites comparisons to Yu Darvish, despite the two of them employing different core pitching strategies. If you want to make the comparison to Japanese pitchers, the closest analogue is Iwakuma. Tanaka throws with more velocity, though, and has an even higher ceiling. In fact, that would be a good tag line for him: “Iwakuma with speed.”

Tanaka is one of the slowest starting pitchers in baseball, taking 25 seconds between pitches. His wind-up is interesting in that he takes the ball out of his glove early, but hides it from the batter’s eye by bringing it behind his leg before snapping off the pitch. His command is excellent, demonstrated not only by his low walk rate, but by the fact that on the year, he has only 162 called strikes to 296 called balls. Combine that data with the incredible absence of walks, and you quickly confirm what the eye test said all along — even when he’s out of the zone, he’s in control and purposeful, and he rarely grooves a pitch in the strike zone.

Johnny Cueto, Master of the Mix-Up