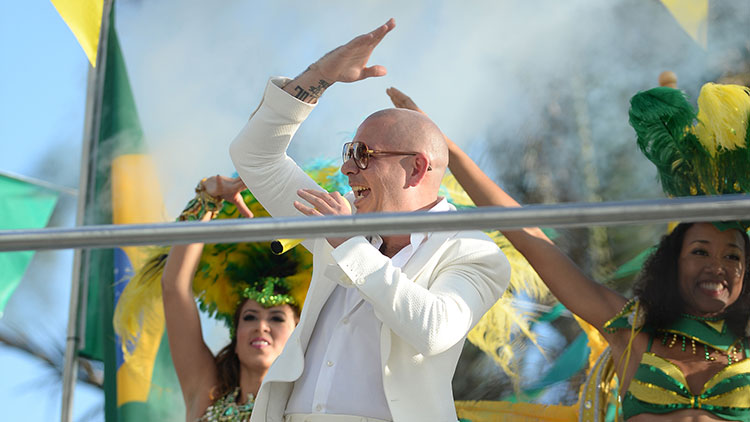 True story: The other day, I had friends over, and after cycling through whatever party-appropriate music I’d put on — probably the new Conor Oberst and a little Future for levity, because I’m insane — someone, let’s call them L., played K’naan’s “Wavin’ Flag.” “Hey,” I said out loud to myself, because I’m insane, “‘Wavin’ Flag’ was a Coca-Cola theme song from the 2010 South Africa World Cup! That happened four years ago. Why are we listening to this?” I did not kick L. out of my apartment, but I did consider her skeptically for the remainder of the evening.

It’s not even that “Wavin’ Flag” is a bad song; it’s pretty good! It’s just impossible for a piece of music to outrun the fact that it exists to soundtrack an international sporting competition dated to a very specific time and place. Now that the 2014 World Cup in Brazil is bearing down on us like Cristiano Ronaldo’s oiled torso, it’s time to reckon with the newest crop of World Cup tunes, ranging from the tournament’s official anthem to some of the country-specific entries. Are they good? Not especially? Are they hilarious? Quite often!

Could the World Cup theme song in 2014 come from anyone other than Pitbull? Isn’t it a surprise that any corporate campaign or event, from the G8 Summit on down to the lowliest and most mundane data-technology demo at the local convention center, doesn’t have its own theme song from the world’s most ubiquitous mascot and sloganeer? Or should we applaud Pitbull for making a tune so featureless, so smoothly unremarkable, that it feels like getting hit by a balloon? Why didn’t they just use “I Luh Ya Papi”? Do you think Sepp Blatter picks the theme song himself? Is the tournament secretly sponsored by Bud Light Platinum? I have so many questions. At least they got a Brazilian in there.

Before we get into this, a caveat: This is not an “official” English theme song or anything. I can’t imagine the English Football Association agreeing to use a Lily Allen song without someone getting tragically murdered by a dude waiting for them in one of those red phone booths. But: Oh my god, this song is appalling. I like OG Lily Allen as much as the next guy, and yet that did not prepare me for the beat here, which is like a techno song from 1993 made by a furnace with GarageBand. The lyrics are all about how great England is, too, which in the context of the World Cup probably even upsets the English. You can’t just brag about Shakespeare in 2014. THERE HAVE BEEN OTHER ENGLISH WRITERS.

It’s good that Samantha Jade, a former X Factor winner, is so focused on the Socceroos “owning the night,” because they sure as hell aren’t going to own the day, when most soccer games are actually played. This song is so perfectly inoffensive it could cohost a radio show with Ryan Seacrest. Apparently, Jade drew inspiration from the Aussie soccer players in writing the song’s lyrics; based on this, we can conclude that Tim Cahill likes it loud. Turn up for Tim Cahill.

Reasons why this is great include:

1.“The indomitable lions of Cameroon.”

2. These guys sound weirdly like Shakira rapping; their voices all have a very satisfying huskiness.

3. They look like they’re having SO MUCH FUN in the video.

5. There are raps in multiple different languages.

Stromae looks like Grey Worm. Plus, Belgium’s Red Devils are my second-favorite squad in the tourney behind only the U.S., the country in which I will live until I move to Belgium. And also: This song is really good? He’s got an impressive croon that kind of reminds me of Paul Banks if he could actually sing, and the track is anchored by intriguingly rubbery percussion. Do I have any idea what he’s saying? Absolutely not, but neither does half of Belgium!

Americans can be forgiven for having a bit of a sore spot when it comes to Ghana, which beat the USMNT in the last two World Cups. Can’t knock the Black Stars for their hustle, though, and can’t knock Wiyaala, whose amazingly titled “Go Go Black Stars … GOAL!” will soundtrack the Ghanaians this year, for her directness on this song. “Black Stars, rise up, stand up, it’s time to show the world again what we’ve got / It’s time to raise the flag of Ghana so high,” she sings, and you’re like, all right, makes sense! Meanwhile, Lily Allen keeps talking about Shakespeare.

The chorus of this is super-catchy, but if I were El Tri, I probably just would’ve gone with the stadium noise of Estadio Azteca as my theme song. Any time you can make players aware of the chance that they might get hit with a bag of urine, you’re on the right track.