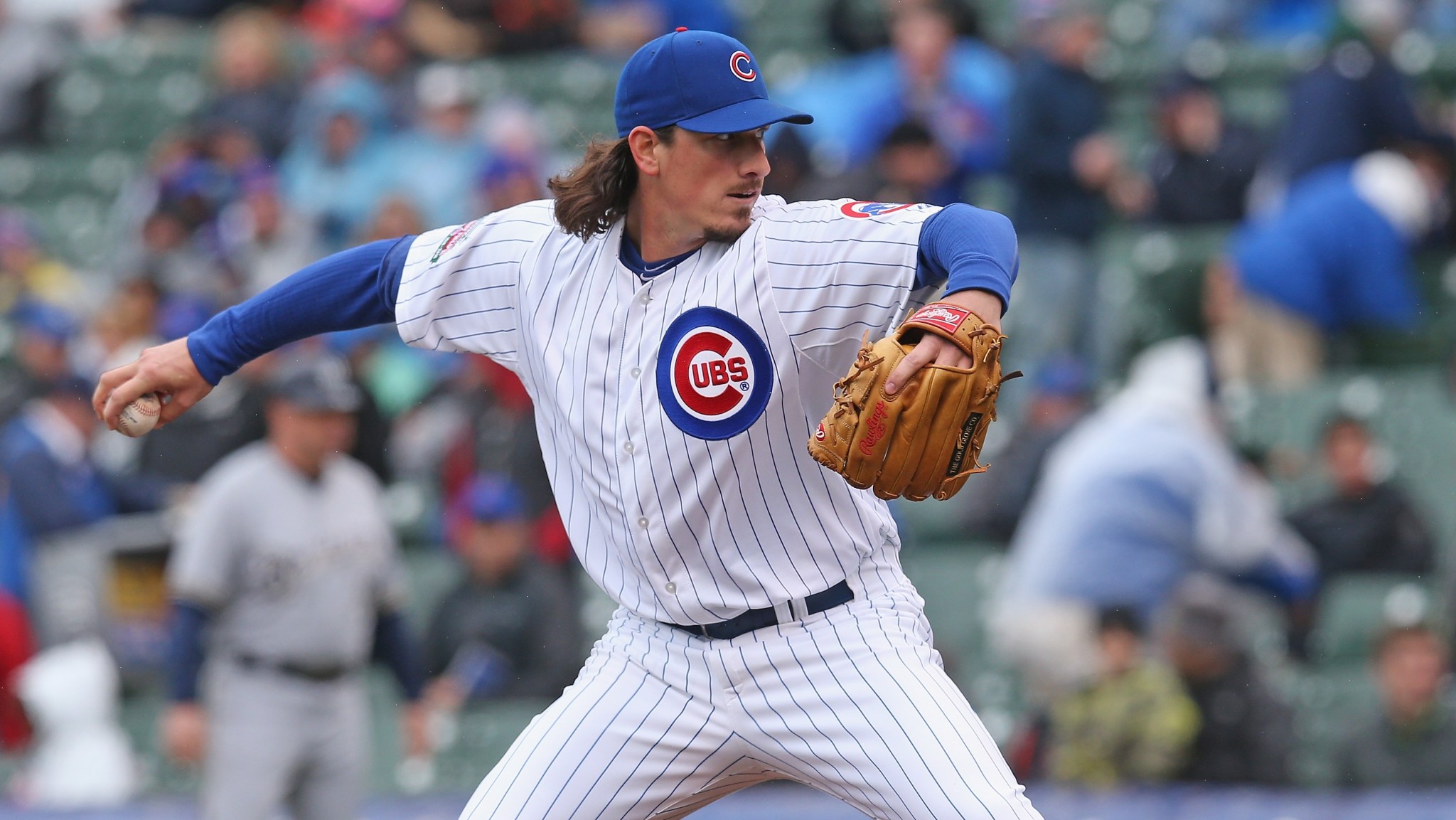 Remember when Felix Hernandez won the Cy Young in 2010 with a 13-12 record, and we were all like, “Wow, the Mariners are really, really terrible,” and it helped the last stubborn holdouts understand how useless the “win” was as a measure of pitching performance? Well, now we have Jeff Samardzija, the Chicago Cubs pitcher who makes Felix Hernandez look like Stan Bahnsen.

Anyway, Samardzija is having an unbelievable season in Chicago, boasting a 1.68 ERA (second-best in MLB; annoyingly, Adam Wainwright has a 1.67) and a top-15 WAR and FIP. The former Notre Dame receiver isn’t a strikeout king, but he’s stingy with home runs, produces a high rate of ground balls, and leaves about 80 percent of runners on base. In terms of wins, though, the dude cannot buy one. He’s probably tried. Here are a list of Cubs scores on days when Samardzija was pitching: 2-0, 4-1, 7-5, 3-2, 3-1, 2-0, 4-3, 4-2. The Cubs lost all of those games, and most of the runs were conceded by the bullpen. In total, the Cubbies are 2-8 when Samardzija — who, again, has THE SECOND-BEST ERA IN BASEBALL — starts. So despite being one of the best pitchers in baseball, his team has the fifth-worst win percentage in the majors when he starts, and he gets the fifth-lowest run support from his offense (thanks to ESPN Stats & Info). That, my friends, is the definition of unlucky.

He’s cursed, and that’s OK. But let’s put that aside for now and find out exactly why he’s been so good in 2014.

(Big thanks as always to Pitcher GIFs, your best source for — you guessed it — awesome pitcher GIFs.)

This is a really interesting pitch to analyze, and an important one, seeing as how Samardzija throws it more than a third of the time (or about half the time when the batter’s ahead). I say interesting because while it’s really fast — fourth-fastest among all sinker-ballers in MLB — his whiff rate is only about 10 percent, which is really low. That being said, his foul balls–to-swings ratio is very high, and he elicits one of the 10 lowest line-drive percentages, meaning that even though he’s not getting a ton of swings and misses, it’s still a really hard pitch to hit. FanGraphs lists it as the 10th-best two-seamer in the game (Brooks Baseball’s Pitchf/x has a superior classification system to MLB’s auto-classification, which is what FanGraphs uses, but the value data on FanGraphs can still be interesting). Along with the speed, you’ll notice the extreme movement in on righties, with almost 10 inches of break. Even though this is a sinker, it moves “down” only about two inches from his straight fastball; the primary movement is sideways. Check it out in action from earlier this year against the Diamondbacks:

With the four-seam and the sinker, you start to get a sense of what you’re getting from Samardzija. He’s primarily a fastball pitcher, and almost 60 percent of the pitches a batter sees will be traveling about 95 mph. The difference in movement between the four-seam and the sinker is subtle—three inches horizontally, two inches vertically. Both pitches chase in on righties, for whom he uses one or the other as a first pitch on more than 70 percent of pitches (he does so 55 percent of the time for lefties). By all measures, this pitch isn’t quite as “nast” as the sinker, except for one — he gets twice as many whiffs. But in terms of production, it produces a lower average (.226 to .239), and no batter has hit a home run off the four-seam yet this season. Here again, we see the utility in contrast; when his prominent pitches dive low and right, even subtly, the four-seam will produce high swings from batters expecting more movement. With excellent velocity, it leaves very little room for error. The good horizontal movement, combined with the speed, also lets him sneak inside pitches past lefties for a strike, which we see here:

There’s nothing too complicated here. When your eye is used to seeing 95 mph breaking right, 85 and breaking left can be tough. Beyond the high velocity (12th among sliders) and, again, a high foul ball rate we aren’t talking about superlative pitches. He mixes it up well against righties, hovering around 20 percent usage regardless of the count, but he loves throwing it as a first pitch to lefties. The results, though, are excellent — batters hit .167 against the slider, and slug just .271. (Pitching nerd wish list: A sortable table comparing individual pitches by batting average and slugging. How about it, Internet?) Samardzija doesn’t throw a changeup, but the slider has the same wrong-footing effect, as we see by the hitter’s puzzlement here on a pitch that shouldn’t be very hard to bunt:

In theory, this should be the perfect complement to the four-seam and the sinker, seeing as how it moves at almost the same high velocity yet stays relatively straight while the others break hard to the right. Because hitters had success against it early this year, though, he almost completely went away from it in April before returning to a 16 percent usage in May. With a .258 batting average against, it’s technically his “worst” pitch, but in relative terms it’s not terrible. The problem is that in comparison to other cutters in the game, there’s not a lot of “cutting” action — it still moves a bit too far to the right. As a rule, cutters that behave the most like a screwball, which is to say move the most in the opposite direction of the fastball, tend to produce the best outcomes. A couple more inches of reverse break and Samardzija would have a devastating pitch on his hands.

I love this pitch, and Samardzija loves it, too — at least with two strikes. He very, very rarely uses it when the batter is ahead, and it sees almost exclusive use in two-strike situations. It drops more than any other pitch except the slider, and has impressive rightward movement along with the uncomfortable velocity, almost 10 mph slower than the sinker, cutter, and four-seam. The results are great, too — .160 batting average against, same slugging, and only four hits on 108 total pitches this season, compared to 14 strikeouts. The only issue? Well, it goes for a ball 62 percent of the time, since it dives out of the strike zone. It’s no big deal if the count is 0-2 or 1-2, but you can see why he doesn’t use it with the batter ahead, and is even hesitant in 2-2 or 3-2 counts. Still, look at this beauty:

If he could throw it for strikes more often, you’d probably see the usage of this pitch go way up.

The obvious one is the lack of strikeouts, despite impressive velocity, and the rate is lower than his last two seasons. At the same time, getting outs on batted balls saves pitches, and Samardzija averages almost a full seven innings per start, good for 13th among all starters. You could easily look at this as a positive change. The walks are probably a touch high at 2.52 per nine innings, but it’s nothing too terrible, and we probably can’t expect him to maintain a 1.68 ERA. The big question is whether his lower-than-normal BABIP (.258) and home run percentage are results of changes he’s made since last season, or whether we’ll see a regression.

Samardzija is a big fellow at 6-foot-5, and out of a windup, he has a slight hesitation that must make timing difficult for hitters. As we’ve seen, the only real pattern you can expect is fastballs early, and the splitter comes into play if you fall behind. It’s going to be fun to follow him the rest of this season, because to say he’s having a “career year” is an understatement. Look at last year’s stats, and you don’t just see a pitcher improved; you see a pitcher transformed.