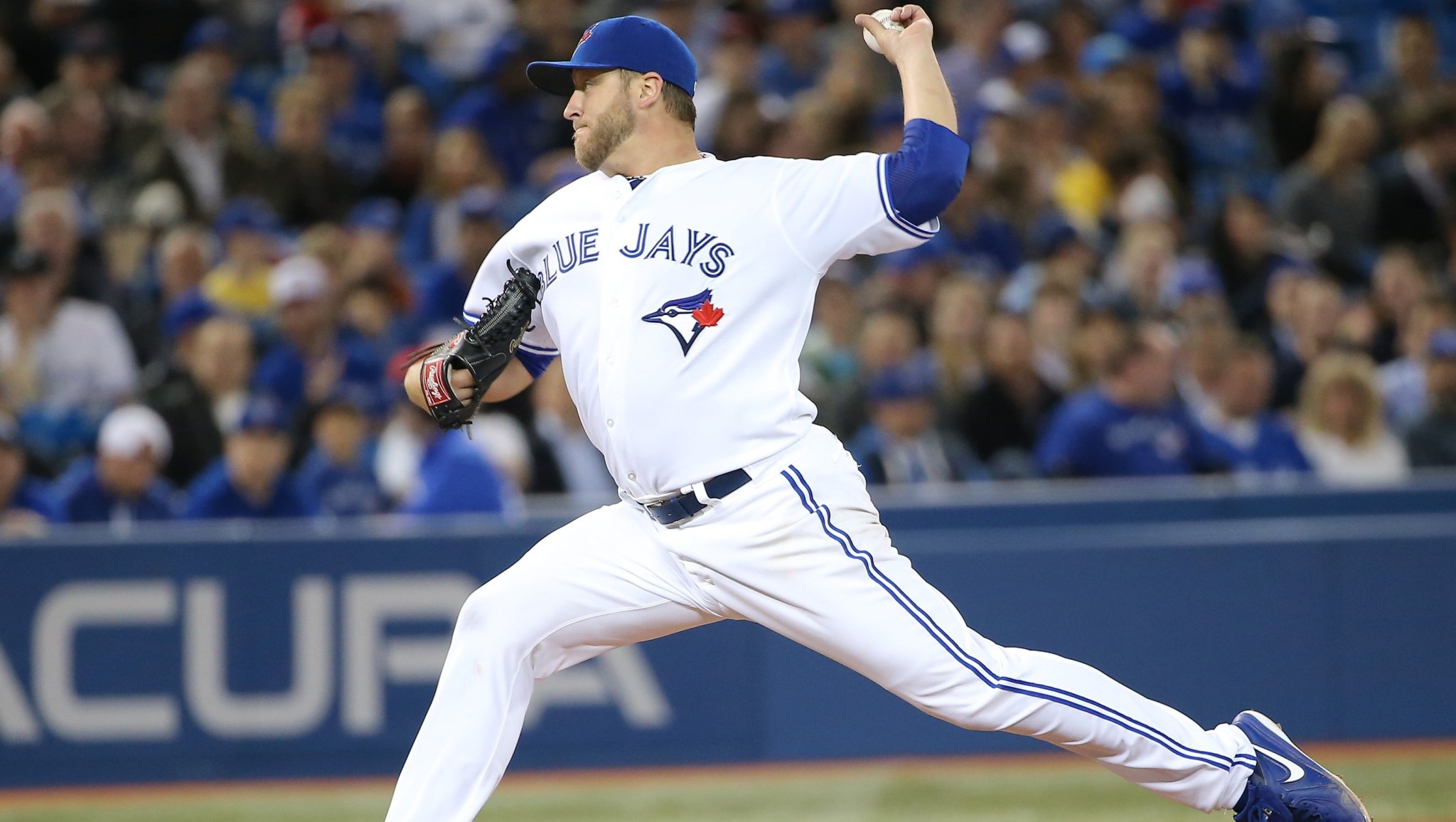 Remember how your dad lost the ability to jump at about age 50, but still managed to beat you one-on-one at basketball for a few years because of annoying fadeaways from the corner and pump fakes and cheap little jump hooks in the lane? OK, maybe this isn’t a common experience, but my dad is 6-foot-6 and I needed a lot of help from Father Time before I could reliably beat him. I thought of that era as his “magic hour,” which is normally a term reserved for the time of day before the sun goes down that looks particularly good on film.

Blue Jays ace Mark Buehrle, age 35, is in the magic hour of his professional career. He has the slowest fastball in baseball, with an average velocity of just over 84 mph. You read that number correctly. There are 27 starting pitchers in MLB with a changeup that travels faster than his “heater.” Nevertheless, he’s 10-4 with a 2.52 ERA, and a top-25 WAR pitcher despite a strikeout rate of 5.20 K/9 that clocks in as the sixth-worst in MLB.

You know what this means, don’t you? First, the man needs a good old-fashioned PitchCrafting. How does he do it? Second, we are about to witness some of the least sexy GIFs in the history of the franchise. Lesgooo.

The first thing to notice about Buehrle is his pitch usage, available in this handy chart. Take a look at those percentages — regardless of the count or whether the batter is a righty or lefty, he throws each of his five pitches at least 10 percent of the time, with two exceptions. The first is that he won’t throw the curveball when the batter is ahead in the count, and the second is that he doesn’t like to throw the cutter with two strikes. Aside from that, he mixes the hell out of every pitch, and for good reason; when you have mid-80s velocity, you’d better be unpredictable.

The sinker, though, is his most common pitch, and he especially loves to throw it with two strikes on righties, as you see in this strikeout of Carlos Beltran from last Wednesday:

As you can see from this zone profile of the sinker in 2014 (note that it’s from the catcher’s point of view), that was a rare example of one that crossed over to the right corner. Most of the time he keeps it on the left half. Did he miss his spot there? Not at all — when you check out his sinker from two pitches earlier, you see a more typical left-middle location:

And there you see the second key facet of Buehrle’s success. Along with variety, his location is pinpoint. He set Beltran up with the outside sinker, and then, two pitches later, after a curve in the dirt to change his eye level, crossed him up with the same pitch cutting across the plate. Crafty!

The sinker is Buehrle’s volume pitch, and with its right-to-left tailing movement, it’s been good enough to hold opponents to a .252 average and just .378 slugging.

Crucially, Buehrle gets solid velocity on his changeup, losing only 5 mph from his four-seam and sinking fastballs. It also has excellent horizontal break, tailing in almost 8 inches on left-handed batters. For Buehrle, this pitch produces the lowest average, at .212 (though the curve is better in slugging percentage), and while the sinker is the overwhelming favorite two-strike pitch against righties, lefties are most likely to see the change. Righties are more likely to see it when Buehrle has an unfavorable count, as we see here:

Again, he’s incredibly consistent with the location, preferring to run it inside on lefties, and if it ends up out of the strike zone, all the better. Paradoxically, he gets the third-lowest whiff rate and gives up the second-highest line-drive rate in baseball, but that’s only when the batters are swinging; like the rest of his pitches, he picks his spots effectively enough that it’s one of the best pitches of its kind in baseball.

The big difference here from both the sinker and the changeup is the horizontal movement — the ball still moves in the same direction, but barely tails at all, veering just 2 inches left while staying fairly high in the zone. As you see from the tabular data, he likes throwing it against lefties more than righties, and the reason is obvious — while lefties expect a ball cutting inside and resist swinging to avoid an inside jam, a righty would be pleasantly surprised when swinging at an outside pitch to find the ball staying in the hot zone. Unlike his other pitches, Buehrle varies the four-seam location a good degree, and again, the reason is a lack of movement; he needs the element of surprise. Even so, it’s been his least effective pitch in 2014, producing a .344 average and .453 slugging, numbers that far exceed his other offerings. When you change the parameters from 2014 to his entire career, you see that this hasn’t always been true; historically, the four-seam was one of his most effective pitches. Now take a look at his year-by-year usage, and notice how it’s gradually gone down as the velocity has dropped from 87.46 to 84.42 mph. Here, we finally see Buerhle nodding to age and wear; a mostly straight pitch that stays up in the zone will suffer the most from a loss of velocity. Even month-by-month this year, you see how he’s lost confidence in the four-seam.

It can still do its job, though; take a look at this four-seam against Jacoby Ellsbury, which briefly fools the Yankees lefty into thinking it’s headed for his knees, but stays over the plate instead:

Speed and movement-wise, the curve is unlike anything else in Buehrle’s arsenal, and he throws it more than a quarter of the time against all batters when he’s ahead in the count. I’m starting to sound like a broken record at this point, but again, the consistency of the location is incredible — down and in, down and in, down and in. The only exceptions, as in the GIF above, tend to come early in the count, especially in the first pitch, when he’ll lay it out over the middle, confident the batter won’t swing. Check out the way the zone profile changes on 0-0 counts. Only Jered Weaver has a slower curve, but Buehrle still finds his way into the top 20 in opponent slugging percentage.

We’ve talked about blending at length in PitchCrafts past, and the importance of making one pitch look like another until the last moment. This prevents the batter from easily distinguishing the pitch, and makes him think rather than relying on pure instinct. As you might guess, if it matters for guys like Félix Hernández and Yu Darvish, it really, really matters for Buehrle.

So, what’s with the cutter? Unlike most pitchers, Buehrle’s cut “fastball” actually looks more like his changeup; it travels at a velocity between changeup and fastball, but tends to drop more in line with the change. The horizontal break, though, is actually to the right, about 8 inches displaced from both sinker and change. According to FanGraphs, he’s the only lefty starter who actually gets rightward movement on his cutter, which makes it look more like a slider (especially with the drop). Check out a high cutter he threw for a called strike to Teixeira last week:

And then an example with better drop:

In both cases, you can see the late surprise of the batter when the ball comes in at their knees rather than tailing left like the other fastballs and the changeup. Buehrle absolutely lives on that right corner with the cutter (that chart is a terrific example of his masterful command), and it’s his go-to pitch when he needs a called strike. He won’t throw it with two strikes, but early in the count (notice that it’s the first pitch in both GIFs above), it’s a great, surprising change of pace.

Pretty obvious, here — the four-seam shows how time can wreak havoc even on the cleverest of arms, and though we’ve seen oldsters with limited velocity succeed well into their late thirties (see Jamie Moyer), it’s relatively uncommon. Also, his FIP numbers, second-highest among pitchers with a top-20 ERA, indicate that a regression might be coming in the second half of the season. Still, Buehrle is as crafty as they come, and the way he’s gone away from the four-seam this season proves that he’s capable of recognizing his own shortcomings and adjusting accordingly. I once had a baseball coach who always said, “You can’t teach brains,” and Buerhle’s wisdom grows with age. He won’t be breaking any radar guns, and his GIFs will continue to be as unsexy as they come, but there’s no reason his magic hour can’t last a couple more years.