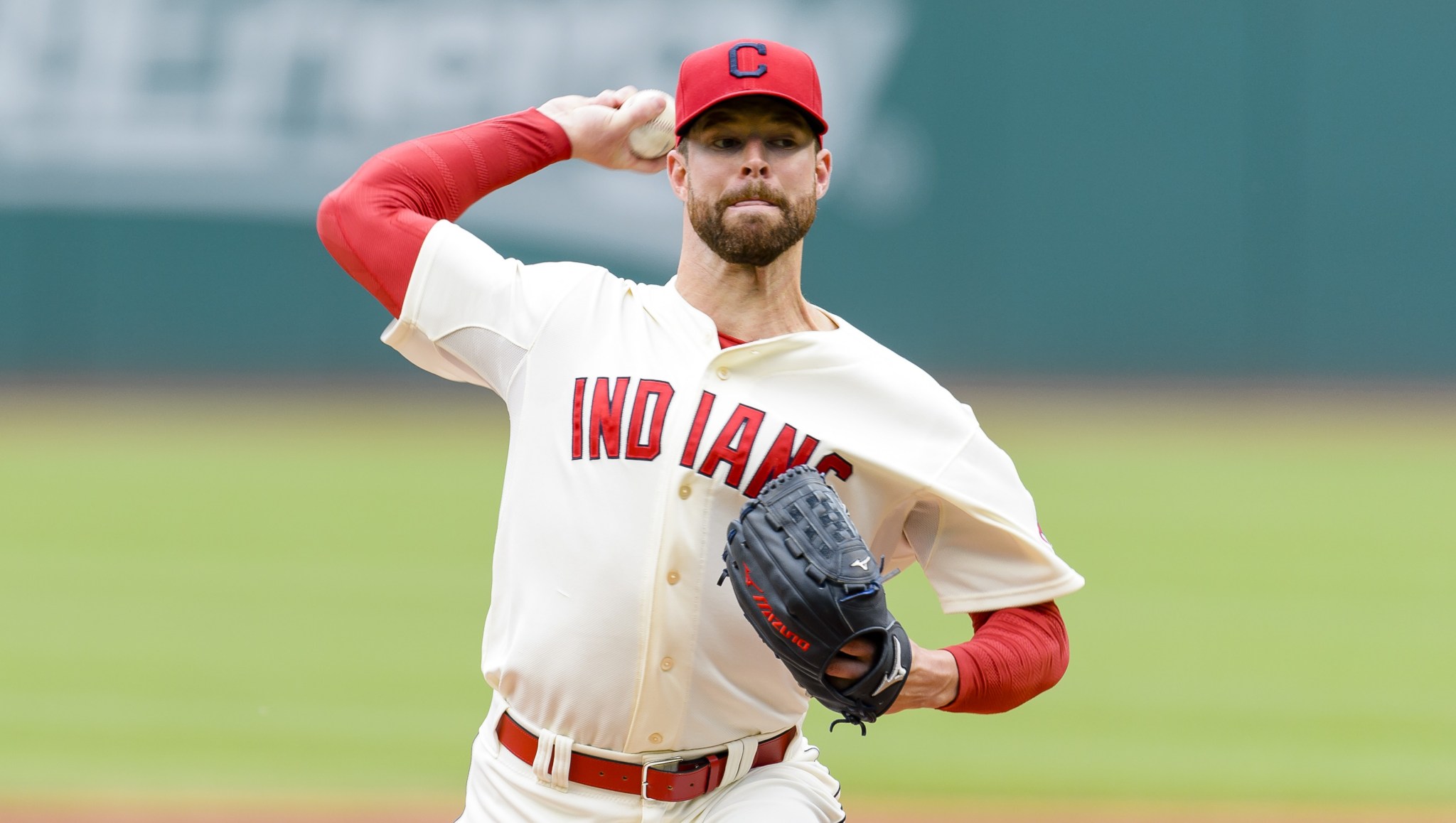 Corey Kluber, the 28-year-old Indians ace whose last name really wants to be spelled “Kubler,” is a relative newcomer in the world of elite pitching, but that elite status is not in question. He’s got the third-best WAR of any pitcher in the bigs, beating out names like Yu Darvish and Clayton Kershaw, and his game log shows that he keeps getting better as the season goes along, working his ERA from the 4-plus regions in April to sub-3 terrain after a 10-strikeout performance against the Tigers last week. He also has the seventh-best strikeout-to-walk ratio in baseball, and you should read the first six names on the list to see the company he’s been keeping in 2014. All that, plus a .316 BABIP that shows he’s been slightly unlucky in the first half.

The man can throw. But even though he was probably the best professional athlete in Cleveland before The Decision 2.0 took effect, the Alabama native has remained under the radar, biding his time until we couldn’t fail to notice him. That time has come, and we must ask: Who the HELL is this guy? Let’s find out, PitchCraft style.

Before we look at this pitch in greater depth, I want to note that Kluber’s sinker usage is probably closer to 50 percent, and that many of his sinkers this season have probably been misidentified as four-seam fastballs (read all about it in the four-seam section below).

With that business done, let’s take a look at Kluber’s most common pitch. The sinker, interestingly enough, isn’t remarkable in any respect beyond its consistent mediocrity. The horizontal and vertical movement is strictly average, and when you go down the line — line drive rate, ground ball rate, whiff rate, swing rate — it’s middle-of-the-pack all the way. Only the velocity, 15th-best among starters, raises an eyebrow, but the speed isn’t enough to keep hitters from posting a .351 average and .508 slugging percentage when Kluber dials up the sinker. Moreover, this isn’t even a “bad” year for the pitch — it’s been the same since he came up in 2011.

When we see a good pitcher like Kluber with a high-usage pitch that seems very pedestrian, it’s almost always the case that it functions as a setup. The sinker is no exception; it gets extremely high use on the first pitch, or with the batter ahead. (Which, by the way, is a good reason to take isolated pitch stats with a grain of salt. When you throw a pitch on bad counts, guess what? You’ll get a bad average.) It’s not until the batter’s reeling that he brings in the big guns, and man, are those guns big. Before we get there, though, here’s the sinker at its best:

Now we’re talking. Cutters typically “work” insofar as they travel at the same speed as the dominant fastball — easy enough — and, more importantly, break in the exact opposite direction. By this last measure, Kluber’s cutter is fourth-best in baseball, cutting in on lefties more than three inches while his typical fastball tails the other way about eight inches. That’s almost a foot of difference for two pitches that essentially look the same coming out of his hand. The resulting .224 average against, with only 11 extra-base hits in 594 pitches, tells you all you need to know about the intelligence of his usage (unlike his other pitches, there’s really no predicting when the cutter will come). If that wasn’t dangerous enough, Kluber also brings a strong sinking element that’s relatively unique among MLB cutters, boasting the third-best drop in baseball.

Cutter GIFs aren’t especially spectacular until you know what you’re looking for, but when you learn the secret, they’re the best. And the secret is this: Watch the batter react as though the pitch is about to end a foot away from where it hits the catcher’s glove.

Let’s start with Dustin Pedroia, who flinches like the pitch is coming inside before realizing his mistake and nodding his head, as if to say, “Yup, got me.”

Or Dayan Viciedo, who steps backward before flailing:

Or Adam Dunn, who seems to sit on the cutter well enough, but fails to account for the drop:

Last, and best of all, is Mike Moustakas, demonstrating what happens when you think a pitch is high and outside and it’s not, at all:

In one of the great upsets in sports history, Kluber’s slider won “Slider of the Year” in last week’s Midseason PitchCraft Awards. As Shane Ryan wrote at the time (with numbers slightly updated to reflect the past week):

“Kluber has a slider that not only befuddles batters (MLB-best .074 BAA), but is also a deadly strikeout pitch with 10.41 inches of horizontal break (also an MLB best) and 3.05 inches of drop (fourth).”

Only the Padres’ Tyson Ross has more strikeouts with his slider (91 to Kluber’s 77), and he’s thrown the pitch twice as often. This is a seriously devastating pitch, and it won’t surprise you to learn that it’s Kluber’s most common two-strike pitch to righties and lefties, or that he mostly keeps it in reserve on non-two-strike counts, waiting to unleash it as a killing blow when the batter is on his heels. A look at the zone profile shows that he keeps the pitch low and left to a consistent degree, though against lefties he’s not above working the outside corner now and then, as you see here:

The bread-and-butter, though, is low and away:

Here we have a bit of a mystery. A look at Kluber’s month-by-month usage stats since he came into the bigs in 2011 shows that starting in 2012, his four-seam fastball was nothing more than an anomaly, topping out at a paltry 7.5 percent and averaging about 2 or 3 percent. A FanGraphs story from early April this year confirms the accuracy of the timeline; Kluber couldn’t keep his four-seamer down in 2011, so his coaches introduced him to the sinker, and Kluber barely threw the four-seamer after that. Then came May 2014, and suddenly Kluber was throwing the pitch at a 20 percent rate. In July, that number is just over 30 percent, but there’s no mention of a philosophical or tactical change online. Weird, right? Even weirder, the four-seamer in May gained about four inches of rightward break, more like a sinker, and three inches of drop, more like … a sinker.

There’s still a slight difference between the four-seamer and the sinker, at least in terms of movement, so one plausible explanation is that Kluber has worked on varying the movement on his sinker in order to be less predictable, and that the ones that break and drop a bit less are being mistaken for four-seamers. What’s clear, though, is that this is not the four-seamer of old, and it’s probably not a four-seamer of new either. The great Harry Pavlidis is on the case, but until the mystery’s solved, here’s an example of what we’re talking about. Notice the mild tailing action as Kluber paints the outside corner for a strikeout:

This is a really strong pitch that, for whatever reason, Kluber has never used with any great frequency. Which is puzzling, because the way it tails right and drops makes it a great complement to the faster sinker, at least in theory. This is a pitch Kluber uses exclusively against lefties, who see it drop away to the outside corner, and as a sort of specialty pitch it’s been massively successful, producing a .133 BAA and .400 slugging. Facing Red Sox outfielder Grady Sizemore in June, Kluber got him into a 1-2 hole with a cutter-change combo, the former tailing in, the latter fading out. Check out the sequence here:

One more, with excellent movement:

Kluber’s change has a vertical drop that would rank among the top 20 in the league, and for blending purposes — same speed as the slider, same movement as the sinker — it makes a great addition to his arsenal. Why he chooses not to use it more often is anyone’s guess.

He once had “JK Construction Company: I break it. You Fix it” T-shirts made to mock the bat-destroying temper of teammate Jason Kipnis. He’s also either a robot or really good at maintaining a stoic facade while teammates hammer him with sunflower seeds, water, and what looks like three bags of flour.

Terrific composure. Kid’s got a future.