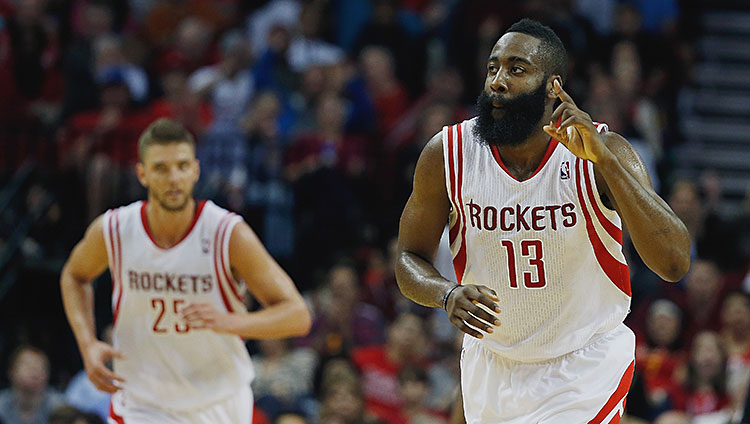 “Did you know that the first Matrix was designed to be a perfect human world? Where none suffered, where everyone would be happy. It was a disaster. No one would accept the program.” —Agent Smith, The Matrix

“Machines were, it may be said, the weapon employed by the capitalists to quell the revolt of specialized labor.” —Karl Marx, The Poverty of Philosophy

“Dwight and I are the cornerstones of the Rockets. The rest of the guys are role players or pieces that complete our team.” —James Harden

Even as basketball becomes smarter, more strategic, more data-driven, and more rational, some things remain unquantifiable, unpredictable, and immutable. And this is why we watch, right? We watch for the beauty of the game, for great players expressing their greatness, and for the lesser players playing selflessly. We watch for smartly built teams of great and lesser players playing the right way. But also, and I think just as importantly, we watch because best-laid plans fall apart, because playing chess against checkers is all well and good until the pawn objects to its station. And we watch because, every now and again, there is beef. Wonderful, delicious beef.

Allow me to quickly walk you through the latest, freshest, grass-fed bone-in steak’s journey from the pasture to your table.

Chandler Parsons, late of the Houston Rockets and now loudly and proudly a Dallas Maverick, was quoted in a story saying that he was “offended” by the way Houston handled his restricted free agency and that he could have been, in effect, the third star the team was looking for. A few days later, Dwight Howard, when asked to comment on the loss of Parsons, responded with, “It won’t affect us at all.” Then, on Thursday, James Harden was quoted, while in the Philippines, as saying that all Rockets players not named Harden and Howard are essentially replaceable. Chandler then responded, in what I can only assume is a Hunt for Red October–level subtweet:

Think before you speak.

All of which is to say that Rockets-Mavs will be one of the must-watch fixtures of the upcoming season. Not because of deft salary-cap management or smart player evaluation. Well, maybe a little because of those things. But mostly because of the intersection of logical progress and human ambition.

There is an inescapable logic to math, as well as progress. Systems are created, develop, and over time become more efficient or get pushed aside. Take, for instance, the development of real-time positioning technologies and their effects on workplaces, sports included. It simply makes sense that once the technology to track NBA players became available, teams would use those technologies to dispassionately analyze the way their players interact with each other on the court.

Similarly, it just makes sense that, as the ability to track people at work and to categorize and log all of their interactions becomes more accessible to employers in every marketplace, the practice will become the norm. That’s progress, that’s math.

But, project yourself into that workplace, monitored at all times by a smart sensor in your name tag. Your bathroom breaks meticulously logged, the number and duration of your very bodily functions reduced to digital blips. Progress suddenly becomes as oppressive as the authority of an officer leading a chain gang.

Human beings, especially twentysomethings, have ambitions, and those ambitions will always seek to move away from an outside power defining them as a cog. Sure, someone has to be the cog. But consider this: Almost every free agent to ever hit the market has expressed some variation of, “It’s just nice to feel wanted.”

You can’t really argue with the cold logic of Harden and Howard’s point of view. Harden is exactly right in his assessment of his and Dwight’s place in the Rockets hierarchy. General manager Daryl Morey’s gambit to sign a third superstar, and to re-sign Parsons using Bird rights, is a perfectly sound strategy, if perhaps not so gracefully executed.

Morey not matching the Mavericks’ three-year, $46 million deal — a deal that will launch Parsons into the top 30 of yearly salaries — for a player who averaged 16.6 points, 5.5 rebounds, and four assists with a 15.9 PER is just math, plain and simple. “That structure of that [contract] is literally one of the most untradeable structures that I’ve ever seen. That’s why it came down to a bet of Harden, Howard and Parsons being the final piece, because we would have had no ability to do anything after that,” said Morey.

One of the most oft-repeated anecdotes in sports history is the semi-apocryphal tale of a young Michael Jordan getting cut from his high school basketball team. MJ used that slight as fuel to a fire that ended up devouring nearly all of the 1990s. Jordan’s then coach, Clifton Herring, actually sent MJ to the junior varsity team. It wasn’t because of his ability, it was because his team lacked height and Jordan was only 5-foot-10. Simple math.

It goes without saying that Chandler Parsons is not Michael Jordan. It also misses the point. After all, Michael Jordan wasn’t even “Michael Jordan” in high school. Both instances are examples of a player rejecting an outside formulation of what they are. That human sentiment, to be more than the judgments of others, no matter how unrealistic, is what makes “Nobody believes in us” an evergreen sports team rallying cry.

Chandler Parsons is not a superstar player. But sports would be pretty boring if guys like him just accepted what the numbers say they are.

This is as good as it gets for Chandler Parsons. He has been in the news basically since mid-June, when his free agency was just a possibility. Since then he’s been a hot-button issue, he has been valued at $15 million per year, and he recorded an epic, if now mythical, club video. Right now his talent and potential are abstract concepts that have been valued very highly. Thank you, James Harden, for prolonging the Summer of Chandler.

The best thing about all of this is that we (I) can now comfortably hate Houston without betraying my one true NBA love. Dwight Howard is an overgrown child without a winner’s mentality. Harden is not fun to watch (though I do enjoy watching him beef). Kevin McHale is a shitty coach. Let’s go Mavs! #MFFL? ​