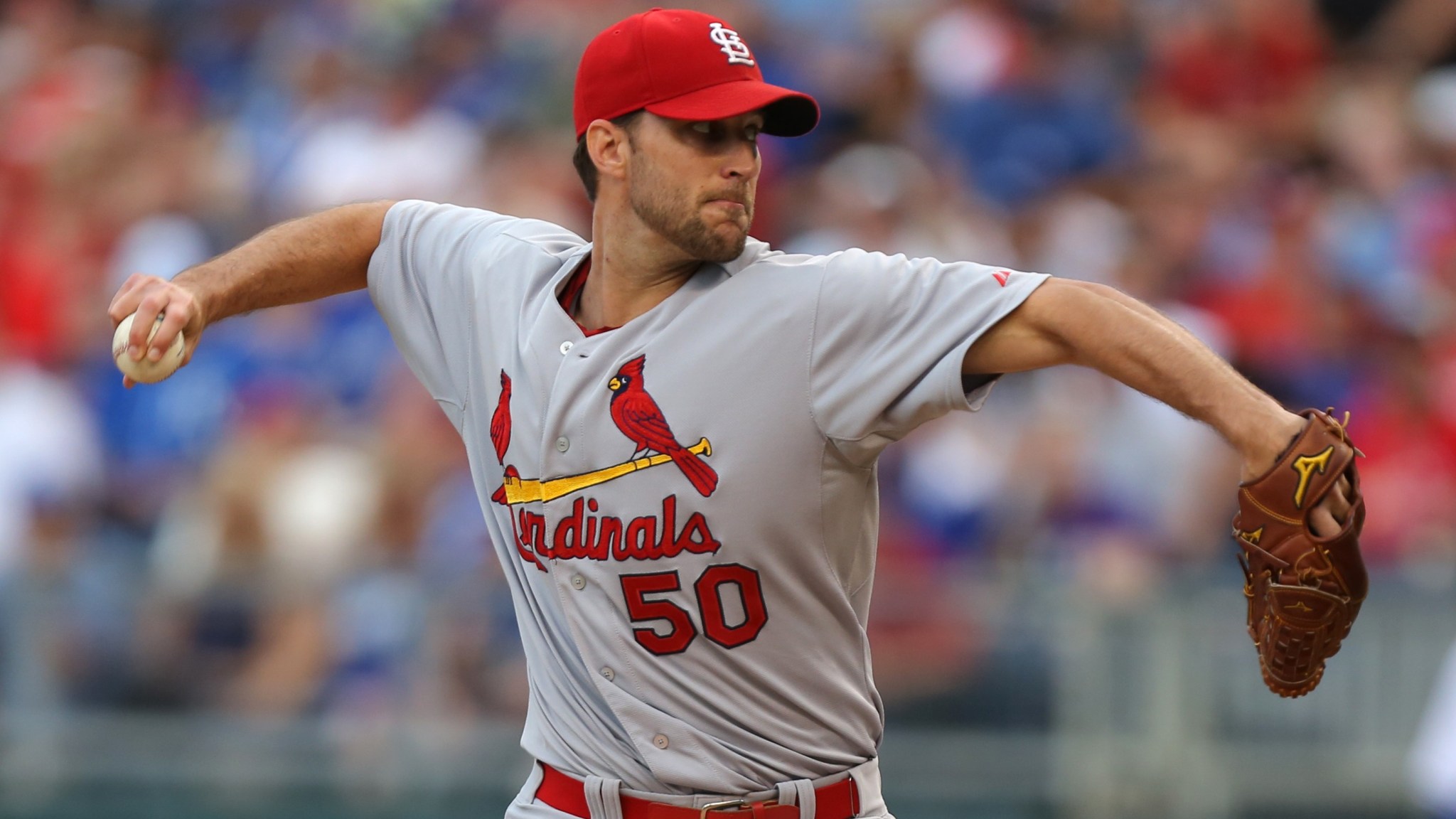 It took eight weeks, but the PitchCraft franchise has finally found its way — in slow, parabolic, curve-like fashion — to Adam Wainwright. The Cardinals ace has solid credentials, with the second-best ERA in baseball and a top-10 WAR, and he’s the current front-runner for the NL Cy Young Award (he’ll fight a great second-half battle with Clayton Kershaw for that honor). Since becoming a starter for St. Louis in 2007, he’s been one of the most reliable, successful pitchers in the game. So why hasn’t he ascended to the level of public stardom he deserves?

There are a couple of factors that have diminished Wainwright’s visibility and made him into baseball’s greatest bridesmaid. He wasn’t yet a starter when the Cardinals won the World Series in 2006, and he missed the 2011 championship season with Tommy John surgery. He’s finished in the top three of Cy Young voting three of the last five seasons — including twice as a runner-up — but lost out to sexier stars like Kershaw, Roy Halladay, and Tim Lincecum. And he doesn’t throw very hard, and his modest strikeout numbers and cerebral style don’t make for particularly dynamic highlight packages. If you’re not a Cardinals fan, think deeply and ask yourself: Do you even know what Wainwright actually looks like? (Answer: Sort of like the guy from Rectify, maybe?)

But forget the fame and the glamour, because Wainwright is a tremendous amount of fun. He’s truly one of the brilliant pitching minds in the game, and a constant experimenter who isn’t afraid to delve into exotica like the forkball (this article calls him a hipster who’s into “artisanal” pitches). He’s a restless tinkerer and a born deceiver, going so far as to switch his windup from pitch to pitch in order to mess with batters — more on that in the Style section. He’s stingy with home runs to an insane degree. He’ll even make you wonder if his lower strikeout rate is his greatest strength; Wainwright is routinely among the pitchers who last deepest into their starts (7.3 innings this season, good for second). Glory be damned. Let’s PitchCraft the man already!

Despite throwing one of the slowest cutters in baseball, Wainwright somehow gets the third-most horizontal movement among starters, the crucial “cutting action” moving in the opposite direction (left, in Wainwright’s case) of his other fastballs. It’s not a perfect relationship, but great movement is often accompanied by great speed, which makes what Wainwright does with his most common pitch so remarkable. It’s like a slider that doesn’t drop, and it’s the perfect foil for his sinker and four-seam (which, as we’ll see in a second, moves quite a bit as well … in the opposite direction).

He uses it consistently across most counts about 30 percent of the time, with one exception: When he’s behind to a righty, he’ll go to the cutter almost half the time, running it away from the plate and hoping for a weak swing (not an idle hope; batters swing at more than 55 percent of his cutters, fifth-highest in MLB). The results speak for themselves; his cutter produces the lowest slugging percentage (.240) among all such pitches, and the third-lowest batting average (.199) after David Price and Johnny Cueto. His zone profile, shown from the catcher’s point of view, shows how consistently he throws this pitch lower-middle to lower-left, avoiding the pitfalls of hanging a slower-than-normal fastball.

Let’s check it out in action. First, a typical inside-outer to a righty:

Then, painting the outside corner against a lefty:

It’s a thing of absolute beauty, slow and wonderful, breaking nine inches to the left (fourth-best among starters) and nine inches down (seventh-best). When I wrote about Stephen Strasburg’s curve, I gushed, “This one’s got top-10 vertical and horizontal movement, which means it looks so, so pretty on TV.” Well, here’s news: Wainwright’s is even better, and not just by appearances. With a .148/.225 line (if you’re keeping track, by the way, his two most common pitches produce sub-.200 averages), he’s got both Strasburg and Felix Hernandez beat, and, to commit the sin of massive understatement, those dudes have really good curves.

In summary: This pitch is on a string. And while I hate to be crass, it’s my duty to warn you that you may experience severe PitchCraft arousal if you continue to the GIFs below.

As you see from the zone profile, Wainwright isn’t too interested in freezing batters with the curves. He keeps it low and left, and he wants you to swing. No surprise, then, that it’s his go-to two-strike pitch, and that he’s already earned 55 K’s on it this year.

Early in his career, Wainwright didn’t really have a four-seam “straight” fastball, and he used his sinker almost 50 percent of the time. That usage hit a career-low 18.8 percent last season, and has rebounded slightly to 25.2 percent in 2014. The deal here is that it has good-but-not-great horizontal breaking action, and it provides a polar-opposite look in comparison with the cutter; the sinker tails right rather than left, finishing 10 inches displaced from the cutter and a couple of inches higher.

In comparison to other sinkers, nothing about this pitch really stands out, except for one oddity — batters swing at it only 34.76 percent of the time, third-lowest in the game. Look deeper, and you get a clearer picture: This is a set-up pitch, thrown most often early in the count (first pitch especially), and rarely seen in two-strike counts. And as the zone profile shows, it’s a very consistent pitch in terms of location, ending on the right half with impressive regularity.

When you look at Wainwright’s history, it’s neat to see how he “built” his four-seam fastball. His sinker has always had roughly the same horizontal movement, but it used to stay up in the zone four inches higher than it does today. When Wainwright began throwing the four-seam, he essentially took the original height from his sinker (simultaneously making the sinker actually sink), but removed the rightward tailing action.

To understand why he did this, we go back to an old PitchCraft concept: “Blending” is the act of making one pitch look like another, look like another, look like another. With just the sinker and cutter, he had pitches with similar velocity and similar vertical profiles, but the horizontal difference was drastic and, perhaps, distinguishable. With the four-seam, he has a third fastball, and this one settles almost exactly in the middle of the horizontal plane between the sinker and cutter. Now, when batters see a fastball, they have no idea whether it will tail right eight inches, cut left three inches, or split the difference. That’s confusing. That’s blending.

Instead of just showing a four-seam GIF here, let’s put it in context, and show a series of three GIFs that comprise Brandon Phillips’s first-inning at-bat on May 25. Wainwright started him with a curve, then threw a tailing sinker, and finished with an outside four-seam. Here’s how that looks:

Three swings, three misses. There’s not much rhyme or reason to when Wainwright throws the fastball, though he has shown a preference for keeping it on the left-hand side of the plate, where he can use that slight tailing action to nibble at the corner. Against lefties, though, he’ll sometimes go to the right corner in a great act of blending. Here’s what it looks like when the batter expects a sinker that will end well out of the strike zone:

It’s rarely thrown, and the fact that he’s earned zero whiffs in 26 attempts this year shows you why. This has always been on the fringe of his arsenal, but has steadily decreased into disuse. Here’s the changeup falling in for a called strike against Billy Hamilton this year:

I’ve learned not to doubt Brooks Baseball … ever … and it says he’s thrown two sliders in his career. Both happened this year; one went for a groundout and one for a hit. Here’s the hit:

When Nick Pollack of Pitcher GIFs fame sent me a couple of the GIFs I’d requested, he noticed something odd — Wainwright’s windup looked different from batter to batter. You’ll notice in the sinker GIF above that he brings his hands above his heads, while in the four-seam GIF he goes straight to the hip. I turned to Google and unearthed this from a St. Louis Post-Dispatch article:

Adam Wainwright thrives on showing a different look nearly every time he faces a hitter or a team, whether it be a complete windup, a windup from the belt or a hesitation windup a la the Japanese pitchers.

How awesome is this guy? So awesome that I’ll stifle my gag reflex and join “Baseball’s Best Fans” in hoping he finally wins that long-awaited Cy Young Award.