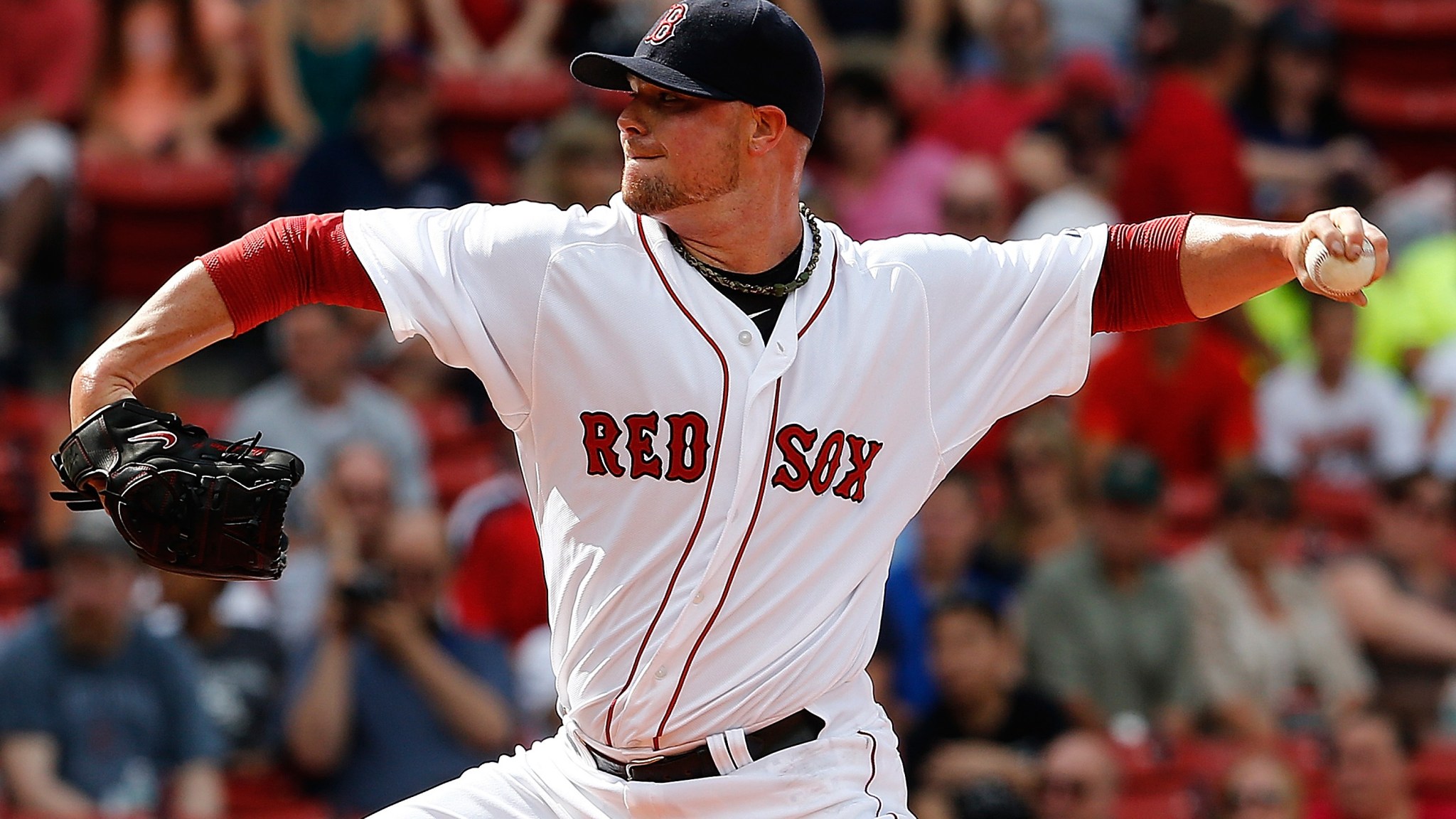 Congratulations to the Oakland Athletics, inheritors of baseball’s third-best pitcher by WAR and new home of the perfect veteran ace to get them over that annoying postseason hump. The Red Sox are a smart organization, and I’m sure there’s ample justification for this trade, but it’s so weird for me to imagine an AL East reality that doesn’t include Jon Lester terrorizing the Yankees. It’s like a beautiful dream you can return to over and over, just by visiting the A’s roster. (On a down note, the news came in halfway through composing this post, forcing me to scrub out literally thousands of passive-aggressive anti–Red Sox jabs.)

Lester has been a solid workhorse for the Sox since coming up in 2007 (with the exception of a disappointing 2012 campaign), and he’s been excellent in the postseason, particularly in his three World Series wins. But even by those high standards, he is having a career season. Lester is on pace to finish with a sub-3.00 ERA for the first time in his career, and his metrics — from FIP to to walks to home runs allowed — are career bests. Most impressively, he’s upped his strikeouts per nine to 9.38 after two straight years in the mid-sevens. It’s a mini renaissance for a guy who didn’t really need one, and it’s going to be fascinating to watch him spearhead Oakland’s playoff efforts against the Tigers juggernaut.

Only one question remains: Can he handle the PitchCraft heat? Let’s find out.

This is your basic heavy-usage fastball, with decent velocity, decent movement, and across-the-board metrics that are comfortably above average without being exceptional. It’s fair to call this pitch situational and locational, because like many high-use fastballs, it doesn’t produce a ton of swing-and-misses, nor is it particularly dynamic to look at. The results are similarly solid: Lester’s fastball has produced a .249 opponent average with a correspondingly low .384 slugging percentage, which places him, just barely, in the top third of starting pitchers. In other words, unlike the cases of Felix Hernandez and Adam Wainwright, the straight fastball isn’t the kind of put-away weapon that explains Lester’s brilliance. Instead, it’s a super-solid foundation on which everything else is built.

As you see in the zone profile, he loves to keep the fastball around the right corner, either catching the plate or not, depending on the situation. And like any good craftsman, he usually keeps his straightest pitch low. The reason for the location is as simple as the six inches of leftward horizontal movement: He can start the ball off the plate and let it work back. Even when he’s at a disadvantage, he puts the ball in a hard place to hit, as seen here in a 1-0 count against the Yankees:

He’s not afraid to use it on two strikes, either, because though he doesn’t get a ton of whiffs, pinpoint location can be plenty when the hitter is expecting an off-speed pitch. Here’s one of the 50 strikeouts his four-seam has produced this year:

When you talk about cutters, Wainwright is the gold standard by which all others are measured, and the highest compliment I can give Lester is that he comes awfully close to the Cardinal ace. The usage percentages are almost identical — 29.64 for Lester, 29.52 for Wainwright — and while Lester lags slightly behind in opponent average (.231 to .210) and slugging (.355 to .275), he’s close enough to have a legitimate argument for a top-five cutter. (Wainwright, Corey Kluber, David Price, and Johnny Cueto are shoe-ins, and I give Lester the fifth spot, especially because he gives up fewer line drives per batted ball than all four.)

Lester’s typical cutter doesn’t quite move in the opposite direction of his tailing four-seam and sinker, but for whatever reason, that’s standard for lefties, who get less “cut” on the pitch than their righty brethren. The contrast with his four-seam is sufficient; it doesn’t tail like a fastball should, and it drops four to six inches lower. The zone profile confirms that his control is pinpoint, with a hot zone low and right.

Here he is fooling Nick Markakis on an 0-2 count, after a four-seam fastball for a called strike and an outside cutter for a swinging strike. Having shown him two pitches away from the zone, Lester throws the payoff at Markakis’s knees and lets the cutting action do the rest:

Here’s what it looks like to a righty when he paints that same corner:

And because I’m apparently a self-loathing Yankees fan, here’s this:

It’s only a slight stretch to call Lester a three-pitch pitcher, particularly in 2014, and though the curveball is the least deployed of the trio, it’s by far the most devastating. He has a top-10 opponent average and sits at no. 6 in whiffs per swing. Again, though, neither the movement nor the velocity really raise an eyebrow. As usual with Lester, it’s about timing and placement, and the zone profile tells the same old story — low, often in the dirt, mostly right, always unhittable. It’s a mark of Lester’s patience and strategic thinking that, despite the curve’s success, he still uses it only 14 percent of the time, and it’s only his third most common two-strike pitch.

When you go pitch by pitch and compare Lester’s all-time opponent average against his 2014 opponent average, you find that he’s having a terrific year across the board, with the numbers down for three out of five pitches. The exceptions are the sinker and change, which may explain why he’s using them way less in 2014. The sinker was never a whiff pitch, but he’s down to just 3 percent this season, and while he used to paint the left corner with consistency, in 2014 he’s lost the location thread a bit. Still, when the pitch works, it’s a good complement to the rest of his repertoire, both for its strong horizontal movement and the fact that in contrast to the cutter, curve, and change, it explores the left half of the plate.

As you see, this pitch is very infrequent, and that 3.52 percent number in 2014 represents a pretty significant dip from the last four seasons. By the movement, it looks like a terrific complement to his fastballs — cuts even further left than the four-seam, drops like the cutter — and over his career he’s held hitters to a .226 average and .328 slugging. This year hasn’t been quite as successful, but the sample size of 82 pitches is too small to draw any conclusions. The usage numbers confirm what we see in the GIFs below, which is that he throws it almost exclusively to righties, with a preference for 0-1 counts, but rarely as a two-strike pitch. This is changeup as setup; a sneaky, tailing oddball to help the batter dig a deeper hole.

Check out this sequence against Delmon Young, where Lester sets him up with an 0-1 changeup, dying left, and Ks him on the curve, also slow, but dying right.

Dude never had a chance. And one more 0-1 change, just for the expression of pain on A-Rod’s face:

As to the question of why Lester is posting a career year at age 30, a great, in-depth post at FanGraphs posits that the steep improvement is due to a higher strikeout rate, lower walk rate, and his increased ability to “manage fly ball contact” in Fenway Park, where hitters reign. The change has been staggering — opponent average/slugging on fly balls went from .424/1.065 in 2012 to .325/.755 last year to .250/.615 in 2014. How is that drastic change possible? It turns out Lester is getting hitters to hit their fly balls much higher than usual, which leads to more outs, fewer extra-base hits, and fewer home runs. And that, of course, comes down to location, particularly with the fastball and cutter that make up the bulk of his arsenal. He’s maximized his natural talent, achieved a kind of wisdom about how to use his pitches, and stands now at the apex of his career.