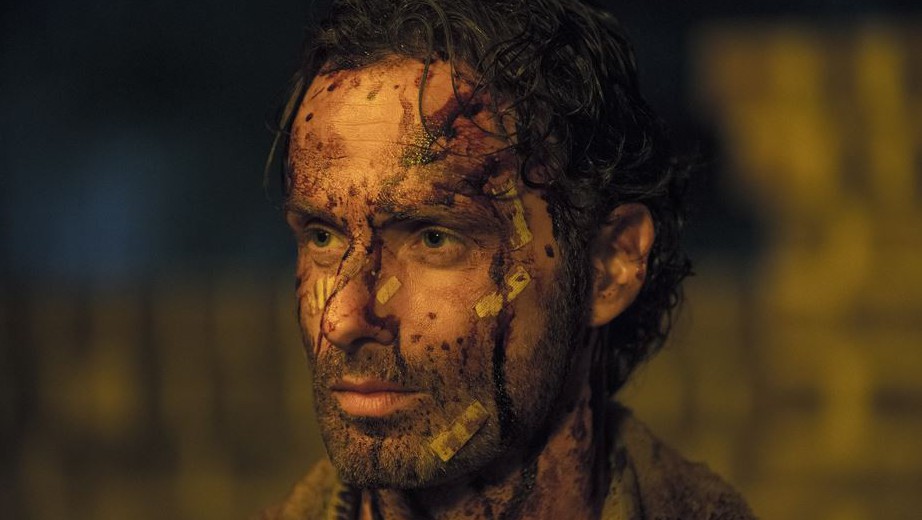 There’s a contract between The Walking Dead and its audience. Each week, we will tune in, in numbers so massive that everybody short of Lucious and Cookie Lyon faint dead away at their Nielsen-overloading magnitude, but we expect certain things in return for our loyalty. We demand, first and foremost, that our Sunday nights be filled with grotesque and increasingly imaginative zombie kills, that we emerge from our one-hour investment — often over a plate of hastily devoured dinner, always a terrible choice — satisfied that new and exciting combinations of edged weapons, improvised bludgeons, desperate and flailing limbs, and the rot-softened bodies of the shambling undead have been explored in good faith, that we will feel as caked in gore as our onscreen proxies. We require an unflinching look into the boundless abyss of the postapocalyptic human condition that leaves our souls as picked over as disaster-depleted store shelves, shaking our confidence that if the world should end during a late-night run to 7-Eleven for a freezer-burned pint of Chunky Monkey, we would be the peacemakers, not the ones brandishing pots of hot coffee and herding the other customers into the walk-in freezer so we can make our selfish escape with an armload of canned beans. And, most importantly — and perhaps disturbingly — we crave a regular and significant blood sacrifice from the cast, that their numbers be depleted so that we can enter each episode giddy with the possibility that it might be one of our heroes’ last.

Indeed, even as this fifth, and perhaps best, season of The Walking Dead offered up a pretty steady schedule of impromptu good-byes from relatively beloved players — from Bob and his delicious, spit-roasted leg, to Beth in the botched hostage exchange in that hospital corridor, to noble Tyreese and his fatal, rookie-mistake lapse in concentration, to gentle Noah, smashed up against the filthy glass of a jammed revolving door, face peeled back like a giant, overripe grape — the “Who’s next?” parlor game only built speed as the weeks passed, reaching a fever pitch as we entered last night’s finale. On the death watch were Sasha, flattened by her snowballing grief, turning blank-faced exterminator who likes to spend leisurely afternoons dumping  downed quarry into open graves; Father Gabriel, whose loss of faith resulted in a conversion experience that left him a suicidal rat gnawing at his suffocating priest’s collar; Tara, convalescing after an accident outside the walls of Alexandria, but who cares, we call her “the not-Maggie one who hangs with Rosita” as often as we remember her actual name; Glenn, now targeted for self-preserving execution by the gun-toting coward he confronted a week ago; and the ostensibly invincible Carl, because there’s nothing quite like the adrenaline rush of working yourself up into a futile homicidal frenzy every time you see that borrowed sheriff’s hat poke into frame, and it’s not like we’re going to abandon our weekly End Carl petition drive just because (1) look at that magnificent jacket, and (2) we no longer know where the line is between “running gag” and “genuinely weird desire to watch him fall into a churning pit full of biters,” but we have about seven months of hiatus to complete that moral inventory.

With the exception of Carl — come on! — the finale toyed with all of these expectations. Sasha, finally exhausted by the demands of her continuing, purposeless existence, laid down for a nap atop the increasing corpse pile she’d been joylessly tending. Father Gabriel asked to be let outside the gates for a brisk constitutional, then, arms outstretched into a Christ pose, approached a feeding zombie, declaring “I’m ready” before punking out at the last second — this fucking guy — and dispatching it with the moldy noose draped around its decaying neck.1 Glenn, perhaps unwisely pursuing homicidal wuss Nicholas into the woods, found himself shot in the shoulder, then grappling underneath a panicked assailant finger-blasting his entry wound. Tara reclined in bed, still unconscious, a blasé writers-room coin flip from pilot season availability. And for those who wanted to believe, however naively, in the possibility of a series-destabilizing departure in the final moments before the long offseason, there was Daryl in a parked car with new bestie Aaron, surrounded by a hundred agents of hollow-eyed death loosed from the Wolves’ supply truck booby trap, or Rick, on his way to his town council reckoning, barely exploding (with his bare hands) the head of a walker that slipped through the community’s less-than-optimal security before it could make the unhinged constable miss his day in kangaroo court. 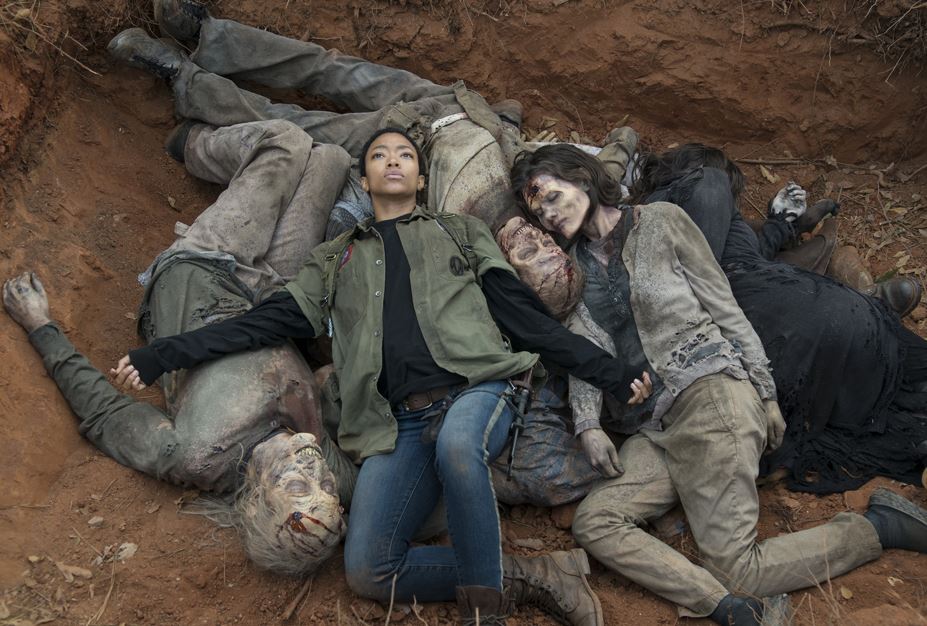 In the end, though, the producers decided to feed the ghouls in quantity rather than quality. A seasonal body count that included Bob, Beth, Tyreese, and Noah — plus various collateral fatalities like Gareth the Hipster Cannibal and Dawn the Overmatched Hospital Cop — would have to be enough. In the finale, all of the above escaped their temporary jeopardies more or less unscathed — fine, that bullet hole probably hurt like hell with Nicholas’s hand jammed into it — with the obligatory sacrifices coming solely from the ranks of the series newcomers and cannon-fodder extras. The Man in the Red Poncho, pursued for recruitment (until they gave up on him, at least) by the Daryl and Aaron Welcome Wagon, was winkingly repurposed — red poncho/red shirt, haha — as walker bait by the latest looming existential threat to the tenuous Alexandria peace, the insane/homicidal/kind-of-begrudgingly-super-cool-in-that-DGAF-mystical-outsider-way Wolves. Reg, cherished husband of Deanna and Builder of the Walls, found himself gurgling through a sneak-attack jugular slice by a katana-wielding Dr. Pete, the abusive romantic road block we’d all loved to hate ever since his sinister debut, out for a late-night cigarette on his porch, doing everything but puffing skull-and-crossbones smoke rings in Rick’s direction. Then, in short order, came Pete’s turn. And that last sacrifice was the most important.

No sooner had Rick finally arrived, bathed in guts, at his hearing in front of Deanna and the townfolk, dumped a freshly killed zombie at their feet, and offered a rousing non-apologia to the people still reeling from the wild-eyed, gun-waving truth-telling he delivered a day ago, than he was afforded a perfect opportunity to demonstrate the necessity of the security-at-any-cost leadership his loyal pals had done their best to soft-pedal (“He’s a great guy who just wants to protect his family”) to the skittish utopians. “I was thinking about how many of you do I have to kill to save your lives,” said the constable, knowing the better-for-everybody coup he’d prepared for would be easy if this hard sell went quickly south, mere seconds before Pete made the tiny tactical error of nearly beheading their leader’s hubby in front of the entire community. (In his defense, he was probably drunk.) And so Rick got the blessing for the summary execution he’d so badly wanted to dole out before the revolver-brandishing, shit-losing meltdown that brought them all to this moment. “Do it,” ordered Deanna, and Rick obliged, ushering in a new, more pragmatically cold-blooded era in Alexandria history. It was a hell of a welcome for Morgan — oh, hey, Morgan! — the long-forgotten Grimes-head from seasons past who saved Daryl and Aaron from a messy fate as the creamy human filling in a car-twinkie, and whose ninja-turtle-esque fighting skills will probably come in handy when the Wolves arrive, ready to bring their exciting brand — ever since the cannibals went mainstream, we’ve needed some indie villain cred up in here — to the foreheads of some ill-prepared suburbanites.

So was that enough death to sate us? Was the final trigger pull on the asshole doctor — sorry, Pete, but at least it was better than being gutted by Carol over an unwashed casserole dish — a sufficient exclamation point on an overall pretty blood-drenched season? Are we OK with the fact that all of our core heroes will return in the fall, when we’ll crank up the old death-watch machine once again? Was the contract fulfilled?

Let’s say yes. We may be entitled ghouls, but we’re not greedy. There will be plenty more sacrifices next time around. Maybe even Carl.2

But in the meantime, there’s a long, restful hiatus waiting for us all. And a leisurely summer lounging by the pool here in Los Angeles. What could possibly go wrong?