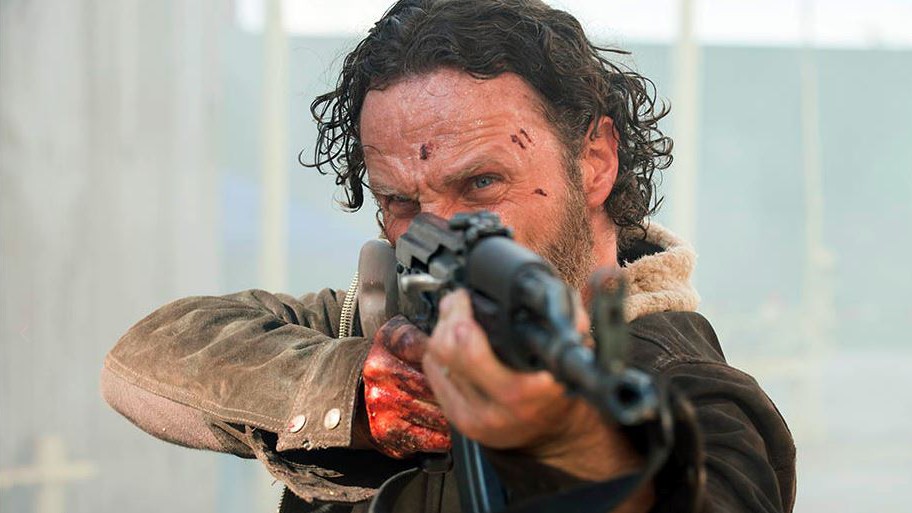 All Hail Carol the Conqueror

John Lopez: It’s about time! How had The Walking Dead gone four full seasons and not yet featured a fireball of walkers blown sky high, and then had said flaming zombies land jaws-a-chomping on a gentrified train depot full of cannibals? Seriously. Thankfully, this premiere was an explosion of pressurized carnage. Following their seemingly endless, Godot-like wanderings through Georgia’s zombie forest, Rick and the Rickettes finally went full metal jacket after being led to the trough for slaughter. (And, hallelujah, the pseudo-moralizing soliloquies were kept to a minimum, reserved for someone already marked as pure evil, that baby-choking Tigers fan!) Whom do we have to thank for it all? Carol: Den Mother of the End Times. 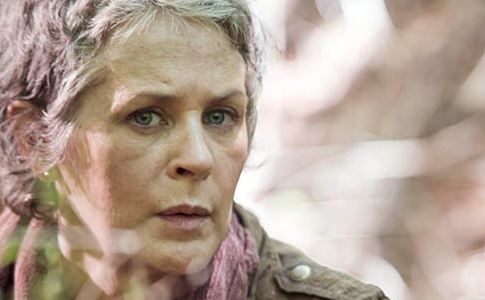 Clearly, folding Carol back into the mix provided the catalyst that let showrunner Scott Gimple and crew learn to stop worrying and love the zombie apocalypse. Carol has long been, by far, the most interesting character on a show that has lurched unevenly but impressively between self-serious sophistry and full-tilt zombie-gore money shots. She alone acts as if she understands the rules of postapocalyptic survival without going all Looney Tunes and opening up a free-range human ranch/roadside BBQ pit. Rick finally embraced his inner badass, but really, he’s just at last paying attention to Carol’s kindergarten lessons on survival. His reward: He gets baby Judith back and we get an adrenaline rush of a premiere with little time for ontological horseshit. (The closest we came was Glenn telling Rick to free Gareth’s other captives as the group escaped; and his reward was to get rushed by a tattooed psycho.)

So where do we go from here? In many ways, tonight’s gore-gasm proved such a release precisely because it was set up by the epic meandering before it. Now that TWD has blown its propane tank, who knows what the next stop on the crazy train is? Hopefully, TWD has learned its lesson — that having its characters earnestly (and explicitly) vocalize their moral quandaries is less engaging than watching Tyreese go Hammer Time on a would-be baby-murderer. But if this season should lose its way in those Peach State backwoods, I hope the Rickettes will follow Carol’s lead: Slather on some 150 ZPF zombie-gut-screen and dive straight into that thicket of trees headed somewhere — anywhere — but where the way-too-obvious tracks are leading.

Carol’s zombie propane piñata, duh. When you absolutely, positively got to kill every motherfucking zombie in the room, accept no substitute.

Jason Concepcion: Where the The Walking Dead always falters, at least for me, is when it tries to say something. In its past four seasons, TWD has tried to comment on the nature of evil, the fabric of society, the qualities that make a person a strong leader, and the sacrifices of the individual for the good of the group, all to pretty laughable effect. The Governor was way funnier than he was terrifying, especially when he was wandering the streets with his Anchorman mourning beard. This unintentional hilarity culminated in one of the top low-key laugh-out-loud moments on basic cable from the last 10 years, Carol telling psycho-Lizzie to look at the pretty flowers. 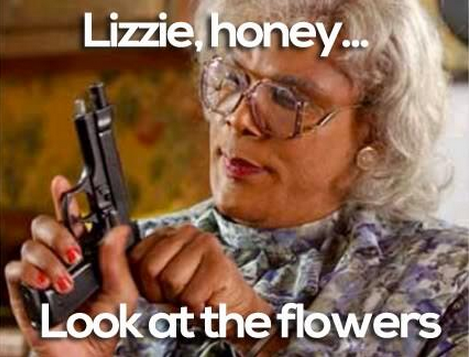 When the show sticks to the zombie-cranium-smashing and drops the pretensions, it’s actually quite fun. Pure popcorn television. The Walking Dead is the Tinder of Sunday night cable fare: I’ll happily swipe right, but I don’t want to think too much about it.

Last night, wedged into about a 15-second crack between the show and the commercials, was a featurette in which TWD’s composer, Bear McCreary, got deep about the creative process involved in scoring music for a show in which walkers get stabbed through the eyes. On Talking Dead, writer Scott Gimple described Terminus as an example of the industrial nature of evil, whatever the hell that means. This is a show that is fastidious about depicting realistic undead-intestine rending and torn-throat arterial spray, but for some reason, all the female characters are still shaving their armpits several years into the zombie apocalypse. 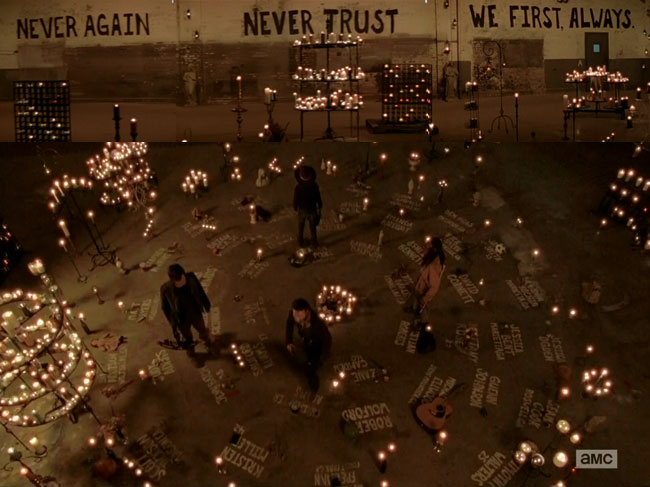 Anyway, the Season 5 premiere featured some of most entertaining moments in the show’s history (I would watch 48 minutes of boxcar weapon-crafting, and badass Carol needs to keep being a thing), including TWD’s best bit of social commentary yet in its depiction of the 21st century’s true monster: the American hipster. Terminus is basically Williamsburg, Brooklyn, circa 2003. There are the industrial buildings and exposed brick walls. The fondness for locally grown produce, organic free-range livestock, and old-world butchering techniques. The candlelit street-art installation. The outdoor food fair and barbecue. And, of course, Terminus’s leader, Gareth, who looks all of 26, is scrupulous about his bookkeeping, and has a haircut that isn’t achievable for less than $150 or without providing your stylist a picture.

The Ballad of Ian and Cutty

Chris Ryan: Well, it wasn’t exactly the Grand Inquisitor from The Brothers Karamazov, but I really liked the one-on-one action between Tyreese and your man in the Tigers hat. For sake of the conversation, let’s call that guy Ian Kinsler. For most of the premiere, these two were locked in a kind of philosophical tug-of-war, marooned in their own bottle episode in a cabin in the woods. We didn’t learn much about life — either in the world of the show or in our own — from this exchange, but it served a greater purpose.

Ian Kinsler was a really good heckler. Because of the subject matter and what the characters have been through, The Walking Dead can be a little severe. Kinsler, at worst a sociopath and at best a bit of a party pooper, wiped away all the dramatic cobwebs and broke it down pretty neatly: Saving babies during a zombie apocalypse is sort of like saving anchors when you’re stuck without a boat in the middle of the ocean.

The Walking Dead has, over the years, gotten increasingly adept at its set pieces — enough so that wading through the melodrama has its rewards. And every once in a while, it will introduce a character, even briefly — think Michael Raymond-James in the second season’s “Nebraska” — who will clearly and playfully outline the competing philosophies of the show. On Lost, it was about living together or dying alone. On this show, it’s about being someone’s friend or just knowing some assholes you stay alive with.

1. If you’ve buried your weapons in a place inconvenient to your current, imminently fatal predicament, make some more from whatever materials are on hand.

You’d be shocked at the sheer range of death-dealing apparatuses you can improvise from items readily available in your average boxcar prison: belt buckles, extra-large splinters, hoodie zippers, and, if things get dire enough, maybe even the hastily extracted jawbone of a fallen comrade.1 The resulting ad hoc bludgeons and eye-gougers are not quite as effective as AK-47s and compound bows, but if your captors decide to approach you from an insecure front door instead of, say, a ceiling hatch from which they could safely incapacitate you with tear gas, such armaments may prove to be the difference between an incredible escape and a humiliating death kneeling in front of the bleed-out trough. Be on the A-Team, not the human-cow team.

2. Position yourself at the end of any execution line, preferably behind colleagues who rate only a shared title card in the end credits.

Speaking of the bleed-out trough: Let the day-players and guest stars go first. Now’s not the time to feign the magnanimity of the secure series regular; it’s literally your lesser-pedigreed comrades’ job to get clubbed in the back of the head and have their throats brutally slashed to establish the stakes of the scene. They probably won’t even have their gags loosened so that they can engage suspiciously chatty villains in the small talk that will eventually permit your escape. Let them perform their cannon-fodder function and buy you the precious extra moments you need for an inevitable plot contrivance to deliver you from your once seemingly certain demise.

If you’re the bad guy:2 Don’t pause to explain your plans to the captives you’re about to murder. Grab that cleaver and get straight to the killing; that dude’s got a knife in his boot he can’t wait to plunge into your neck the instant you’re distracted enough to expose a vulnerability.

If you’re the good guy: Don’t engage a subdued antagonist in conversation. It may seem like the polite thing to do, or a way to reassert your humanity and distinguish yourself from the debased monsters who have overrun your collapsed society. But every minute you delay is another minute for someone to loosen his bonds and threaten the helpless infant you’ve carelessly left within arm’s reach. “It doesn’t have to be this way,” you’ll tell yourself as you struggle with the decision to take a life, inadvertently creating the baby-imperiling opportunity you’ll wind up using as your eventual murder-imperative. Save yourself the headache — and the duct tape for the jerry-rigged handcuffs — by putting a bullet in him from the jump. It’s ultimately more humane than pounding his head to meat loaf when he tries to get the drop on you.

4. Disguise yourself with zombie guts.

This isn’t your first time around the slathering-yourself-in-undead-entrails block. You know how it works. Grab a handful of freshly harvested walker intestines and get to zombieflauging. Throw on that filthy, gut-festooned poncho and shamble among the walkers. Maybe moan a little to complete the effect. Have fun with it. It’s not every day you get to stage a one-woman raid on the cannibal farmers’ market at the slaughter station. It’s like a twice-a-season thing at best, at this point.

5. Don’t adopt a brutal metaphor as your organizing philosophy.

“You’re the butcher, or you’re the cattle” might look good on a T-shirt. It might sound intimidating to a certain class of easily broken prisoner-guests. And it might even be a pretty faithful articulation of what you’re up to at your honey-trap encampment, one that makes your apron-clad, machete-brandishing lackeys feel as if they’re part of a team united under a larger idea. But come on: It’s going to make you sound crazy. And not that creative, considering you’re literally storing human torsos in a meat locker to keep them fresh for that night’s long-pig roast.

“Saving a baby is kind of like saving an anchor when you’re stuck without a boat in the middle of the ocean” is also out. Not as snappy. It runs contrary to humanity’s innate parenting instincts. And you’re never going to CafePress that onto a onesie like you could with the butcher line, even if you’ve been workshopping a pretty cute doodle involving a little sailor infant in a capsizing dinghy.

Filed Under: TV, The Walking Dead