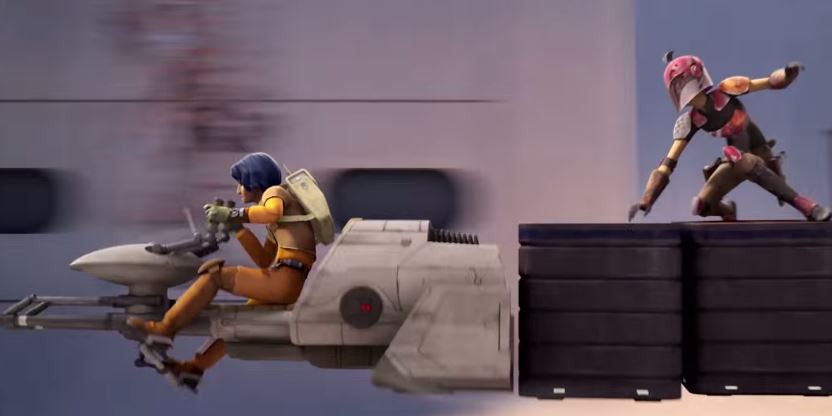 Eighteen months after Disney acquired Lucasfilm, ensuring that all future Grantland stories about Star Wars would start with the disclosure that Disney also owns us, the official Star Wars site broke the news that Lucasfilm’s new leadership had wiped the story slate clean. Forthcoming Star Wars films, Lucasfilm president Kathleen Kennedy announced, would not re-create, or even respect, stories from the Expanded Universe — almost four decades’ worth of accumulated comics, books, and video games that mapped out what the characters from the films (and many others who existed only on the page) were up to when they weren’t onscreen. Instead, Disney’s Star Wars assembly line would plot an entirely new path for the series.

This revelation came as a blow to those of us who’d spent large chunks of our childhoods getting our Star Wars fix from Dark Horse Comics and books by Timothy Zahn: It made those stories even more imaginary, too far-fetched even for a fictional universe. Still, the decision made perfect sense: Disney didn’t drop $4 billion on a tentpole brand only to make the writers and directors of future Star Wars blockbusters beholden to text from relatively little-read books written decades before. In order to make Star Wars more lucrative than Lucasfilm could possibly imagine, Disney had to strike down the stories that had helped sustain interest in the series between Return of the Jedi and the theatrical release of the Special Edition.

In recent years, the Expanded Universe had extended Star Wars’ post-Episode VI story line all the way down to Luke Skywalker’s distant descendants. By Order 66’ing the EU, Lucasfilm issued a challenge to itself — tell even better Star Wars stories — that writer/director J.J. Abrams and cowriter Lawrence Kasdan will attempt to meet in Episode VII next December. More than a year before Episode VII, though, Disney is delivering a palate cleaner: Star Wars Rebels, an animated series that premieres tonight on Disney XD.

Aside from a novel released in September that serves as a prequel to the show, Rebels is our first look at Star Wars done by Disney. And after three episodes (of the season’s scheduled 16) and four online-only shorts, the show seems to confirm the widespread suspicion that all Star Wars needed was less George Lucas. Even to fans who shared Simon Pegg’s pain about the prequels and felt the disturbance when thousands of the EU’s way-too-detailed Wookieepedia pages were suddenly silenced, Rebels strongly suggests that onscreen Star Wars can get good again by tapping into the qualities that worked so well before.

Lucasfilm made a smart choice with its new series’ setting, slotting Rebels into the Star Wars timeline 14 years after the events of Revenge of the Sith and five years before A New Hope. Aside from some stories about Han and Lando living the scoundrel life, the EU hadn’t exhaustively chronicled this particular post-prequel period, so Rebels’s first few episodes don’t ruffle any fanboy feathers by rewriting fictional history. And crucially, the creative team1 realized they could get more mileage out of fresh faces than they could out of Luke whining about missed trips to Toshi Station or Leia learning to braid her hair into buns. As a result, Rebels introduces us to a new cast of characters rather than forcing us to spend time with younger, less interesting versions of the original trilogy’s central trio.

Admittedly, Spark of Rebellion, the double episode/mini-movie that aired on the Disney Channel earlier this month and sets up tonight’s series premiere, starts out following a familiar script. Ezra Bridger, a Force-sensitive, adolescent orphan from a backwater world — not Tatooine, for once, but a new planet named Lothal, which is a lot like Tatooine with grassy plains instead of sand — crosses paths with an incognito Jedi and a crew of likable rogues flying a Millennium Falcon–esque modified Corellian freighter and gets pulled into galactic politics. The Jedi, Kanan Jarrus (voiced by Freddie Prinze Jr.), recognizes Ezra’s abilities and decides to train him, and Ezra learns to fight for something other than himself. So far, the story sounds a lot like A New Hope and The Phantom Menace.

Even as Rebels treads some of the same ground, though, it feels more like a reboot than a remake. This is slightly longer ago in the galaxy far, far away, and the ragtag Rebel Alliance from the first film is just beginning to coalesce. While some established characters pop in and out of the plot — if you tune in tonight, you’ll see Star Wars Zeligs R2-D2 and C-3PO — the focus is firmly on Ezra, Kanan, and the rest of the crew, who use call signs in combat but treat each other like family when they aren’t in the field. Each of the characters subverts a Star Wars archetype: Hera, the pilot, is much more clothed than the typical Twi’lek in the original trilogy; Zeb is a hulking alien who can speak for himself; Sabine is a female Mandalorian and a detonations expert who treats explosives like art; and Kanan not only has to hide his powers, but seems to have strayed from his Jedi ideals. The slow reveal of their backstories is compelling enough to sustain the series without much assistance from “known” character cameos — and Disney evidently agrees, having renewed the show for a second season before its official premiere.2

Rebels could’ve been an empty nostalgia trip, a platform for excessive fan service. Fortunately, the fan service in Rebels strikes a satisfying balance between Bob Dylan set lists and Star Trek Into Darkness. Rebels looks and sounds like what it is: a series made by obsessive Star Wars fans. Spark of Rebellion, tonight’s premiere episode, and the four shorts on YouTube provide plenty of “snozzberries taste like snozzberries!” moments for anyone who was weaned on the original series. The speeder bikes and blasters sound just like they did on Endor. The TIE fighters emit their mournful roar, and Imperial officers speak in clipped English Coruscanti accents. When Ezra activates a lightsaber, Kanan warns him not to cut his arm off, and a stormtrooper flips over a railing with a Wilhelm scream. There are even a few refugees from the EU: objects, characters, and vehicles that originated in books or comics and, by appearing in Rebels, became canon. The score is part classic John Williams samples — so ingrained in our brains that quick audio cues can advance a scene without a word of dialogue — part rerecorded cuts from the film soundtracks, and part original music in the same vein as Williams’s work. Williams’s musical accompaniment is the only aspect of Star Wars that’s never slumped, and Rebels extends the streak.

Visually, the series is patterned after the classic concept art Ralph McQuarrie created for the original films. Watch just the first 30 seconds of Spark of Rebellion, and you’ll see not only the obligatory series-starting shot of a Star Destroyer overhead, but multiple scenes that could’ve come from McQuarrie’s sketchbook, featuring sweeping vistas with small, isolated figures in the foreground. It’s a less technically impressive but more stylish look than we’ve seen from Star Wars — more Miyazaki than Industrial Light & Magic.

Whether one considers them homages or mandatory adaptations of the franchise’s visual language, some of the cartoon’s touches — the screen wipes between scenes, the elongating lines of hyperspace — are window dressing that even the worst Star Wars properties included. The best attributes Rebels borrows — the ones that make those visual flourishes so fulfilling — are the original trilogy’s tone and pacing. The action scenes are well-choreographed, and the script captures the spirit of adventure from “Flash Gordon” serials that Lucas sought to bring to big-screen sci-fi.

Rebels is, mercifully, much more lighthearted than Episodes V and VI and the Clone Wars cartoon. There’s no shortage of nightmare fuel in the original trilogy — Darth Vader, the Death Stars, the interrogation droid, the dianoga in the garbage compactor, carbonite freezing, the Sarlacc pit — but the sad and scary stuff was always leavened with lighthearted banter. The Empire was a cross between ruthless, racist efficiency and amusing incompetence, ruling the galaxy with an iron fist despite its soldiers’ inability to hit anyone with a blaster. Rebels straddles the same line, combining clueless stormtroopers and more formidable adversaries like the Inquisitor and Imperial Security Bureau Agent Kallus, who continues a regrettable naming convention for Star Wars villains.3

This is, ostensibly, a show for the 6- to 14-year-old kids that Disney XD targets, but unlike The Phantom Menace, it’s not too dumbed-down for adult viewers. The comedy comes from capable writing, not battle droids saying “roger roger,” slapsticky sidekicks, or stilted dialogue. Its strengths lie in what Abrams regards as the roots of the original trilogy’s success: emotion, not explanation. Ezra’s powers are largely implied. He senses danger instants before it arrives and leaps like a champion long jumper, but he doesn’t deliver any monologues about how he’s always been different. And when Kanan gives Ezra the “surrounds us and penetrates us” speech, he blessedly omits any mention of midi-chlorians.

Ever since the announcement that Abrams would direct Episode VII, fans have wondered whether he would ruin Star Wars. That line of speculation never made much sense: If the prequels couldn’t kill Star Wars, nothing could. The worst Disney could do was fail to restore the franchise to its former luster — in which case the series wouldn’t be worse off than it was before the sale. Fortunately, Star Wars Rebels is a solid first salvo in the campaign to rehabilitate the brand. Other than Ezra’s early resemblance to Aladdin and some suspiciously prominent product placement for Star Tours, Rebels doesn’t feel like Disney-style Star Wars. It feels like Star Wars before the series ran off the rails.