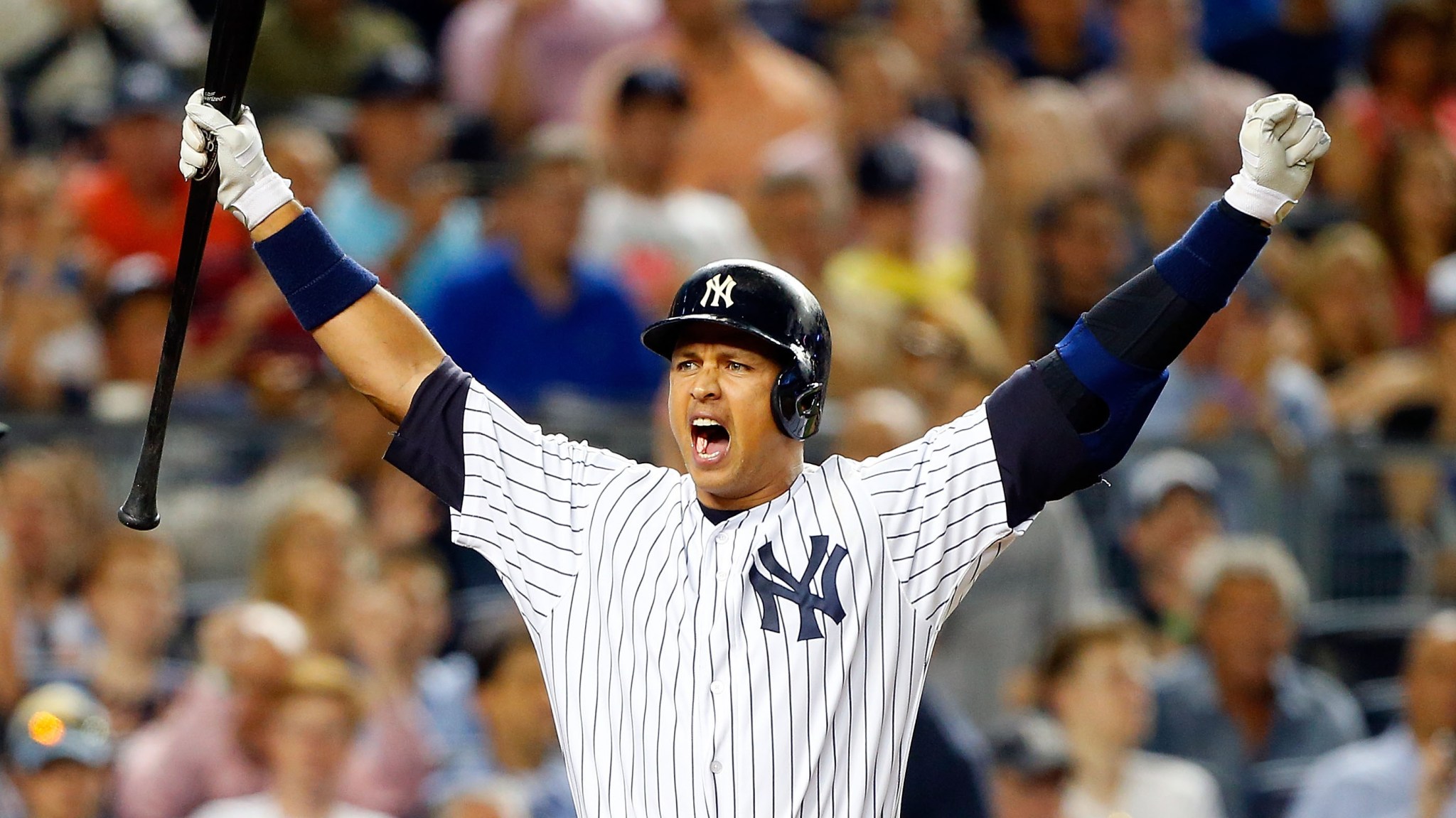 Friday was a very special day for me.

In my first at-bat against the Tigers, I was fortunate enough to collect the 3,000th hit of my career. At Yankee Stadium.

And it was a home run.

As I was circling the bases at a pace respectful to both my opponents and the game we love, I pinched myself to make sure it was all really happening.

And all I could think was: I am humbled by the opportunity to be a member of the 3,000-Hit Club, the most important club in sports history. There may be even fewer people in the 600-Homer and 2,000-RBI Clubs I share with only my hero Hank Aaron, but none of them means as much as being a part of Team 3,000.

And boy, do I have a lot of people to thank for helping me get to this amazing milestone.

Sure, there was a press conference afterwards, and I thanked some of them there, but that’s never the right place to share your personal thoughts or to speak from the heart. There is always more to say, and more people to recognize for the role they may have played in achieving such an incredible feat that so very few people have accomplished.

So I am writing this letter today to say all my thank-yous. I will do my best not to forget anybody.

First of all, thank you to the greatest fans in the world. There is no better place to play than New York, and returning this year to your constant cheers, shouts of “I LOVE YOU ALEX,” and innings-long chants of “MVP” has been the thrill of a lifetime. I am humbled by your support, especially in road games, where the hometown crowd sometimes forget that I am a human being with feelings as they toss syringes and other dangerous medical waste on the field during my at-bats for some reason I don’t understand. You accept me as I am, and I accept the interpretation that some decisions I made in the past may have not been the best ones. I look forward to giving you everything I have for the rest of my career.

Thank you to my Yankee teammates, both current and former, for making it such a joy to come to the ballpark every day. I love humbly sharing my knowledge of the game with you and helping you be the best players you can possibly be. I expect nothing in return but your friendship, your smiles, and not to be forgotten when we are spraying champagne all over each other to celebrate another World Championship this October, because I feel like in 2009 I spent a lot of time chasing a Moët shower. I’m sure you’ll make it up to me this year.

Thank you to the other 28 members of the 3,000-Hit Club, whom I will list right now, off the top of my head, without the use of the Wikipedia, because I have always been a student of the game: Peter Rose, Ty Cobb, Hank Aaron, Stan Musial, Tris Speaker, Derek Jeter, Cap Anson, Honus Wagner, Carl Yastrzemski, Paul Molitor, Eddie Collins, Willie Mays, Eddie Murray, Nap Lajoie, Cal Ripken Jr., George Brett, Paul Waner, Robin Yount, Tony Gwynn, Dave Winfield, Craig Biggio, Rickey Henderson, Rod Carew, Lou Brock, Rafael Palmeiro, Wade Boggs, Al Kaline, Alex Rodriguez, and Roberto Clemente. As a young child playing on the ballfields of the Dominican Republic and then in Miami, I idolized every single one of you. I am humbled and amazed to be in your company, and I thank you all for taking the time to vote me into your magical fraternity. I wasn’t expecting it. Very special.

Thank you to my daughters and their mother for standing behind me. I could not have done this without your love, or the love we used to share before the pressures of being a superstar complicated our relationship to the point where it made more sense to live apart so I could fully dedicate myself to my passion for the game. Our family’s sacrifices made this day possible, and I am humbled by them.

Thank you to Cousin Yuri for everything. My counsel recommends we leave it at that.

Thank you to the Yankees organization for supporting me both spiritually and contractually, and for allowing me to stay in New York for the historical-milestones portion of my career. Things have never been better between us, and I am confident that we will figure out the right charity to which we can donate the $6 million in home run bonus money you are wisely holding in escrow for me until after the season, when making that decision will no longer be a distraction for all of us. I will be humbled to share those funds with the people who need them the most, once you release them.

Thank you to the Steinbrenner family for issuing such an emotional and heartfelt statement via the team’s Twitter account to congratulate me on my 3,000th hit: “Congratulations Alex on your 3,000th hit.” And thank you to Brian Cashman for faving and then unfaving it — that little yellow star meant the world to me for the three minutes it was there.

Thank you to the Boss for visiting my dreams on a regular basis and demanding that I perform like the highest-paid player in the game, even if other players now have contracts of higher AAV or long-term payouts. These hauntings remind me how lucky am I that your dying wish was that I be a Yankee for life. With two more years left on my contract, your wish will become a reality.

Thank you to former commissioner Selig for encouraging me to take a yearlong and 100 percent voluntary sabbatical from baseball so that my injuries could fully heal and I could return to the field as strong as ever. I know that at first I was resistant to the idea, but as usual, you were right, and I owe my incredible bounce back this season to your wisdom. I also appreciated the private phone call on Friday night in which you admitted that I am your favorite player. For the record, I don’t consider myself “the greatest of all time,” no matter how many times you may have said that. But I also admit that as a commissioner you may have better perspective on that than I do, and that you will share these feelings with the relevant members of the Hall of Fame Veterans Committee when the time is right.

Thank you to Commissioner Manfred for welcoming me back once that voluntary sabbatical was over and for embracing me as the face of the game and its most marketable ambassador. I promise to never let you down if I continue to be fortunate enough to humbly claim more of baseball’s sacred records.

Thank you to my manager, Joe Girardi, for allowing me to DH full-time to save my legs. Even though I could still be a Gold Glove third baseman or shortstop should Chase Headley or Didi Gregorius continue to struggle in their adjustment to playing on the world’s biggest stage, as a teammate I appreciate the patience you are showing by sticking with them through their struggles in the field and at the plate. The temptation to put me back out there must be incredible. You are among the strongest men I know to gamble with our playoff chances like that. But I’m confident your bets will pay off in a championship for the team and a World Series MVP for a certain designated hitter who selflessly gave up the defensive part of his game to make the team better.

Thank you to Justin Verlander for throwing the pitch that became my 3,000th hit. We will always be joined in history, our names linked forever, even long after we both pass on. We should hang out. I’m a huge fan. All my love to Kate.

Thank you to Zack Hample for catching my 3,000th hit and preserving it for history. I know that it will hold a very special place of honor in your collection of over 8,000 baseballs, none of which you ripped out of the hands of small children who wouldn’t appreciate them. The game needs more dedicated fans like you. You can sell the ball, but I’m going to keep my memory.

Thank you to the Shirtless Shortstop Society for providing daily motivation as I check in before each game with the photo that hangs in my locker. I may have lost touch with some of you over the years as you’ve retired and I’ve continued to play, but know that I’m always thinking of you, and I hope that all of you are still alive and thriving wherever you are, even Rey Ordóñez, though I have heard credible rumors he may be playing against his will in a semipro league in Kazakhstan, out of position. He is in my prayers.

Thank you to the entire wardrobe community. In my darkest days, when I could hardly find the will to gallop across your enchanted fields, you pushed me to never give up. Our pickup games on the poppy diamond at Centaur’s Crossing kept my skills sharp and made my transition back to the inferior human leagues much, much easier. In the unforgettable proclamation of Goldhoof the Immortal Satyr, “I am the luckiest creature in all the fifteen realms. I blow this flute for you.”

And lastly, thank you to Jetes. I know that you are busy with your post-playing career, but I hope these thoughts eventually find their way to you. You are my Captain, my best friend, my hero, the inspiration for all that I do and all that I am. I hit a home run for my 3,000th hit as a tribute to yours, but to the opposite field out of respect for where yours landed in left. You are a bright-eyed god walking among mere men, leading by the example of your perfection. You taught me everything I know about winning, both on the field and in life, and I hung a prototype of your Monument Park plaque I made myself above my bed to remind me of that every single day. I’ll never be able to repay you for all that you have done for me. Especially when during your retirement ceremony, you leaned in and whispered in my ear, “You are the Secret Captain now. Tell no one.”

I will tell no one, Jetes.

Your words are safe with me forever.