‘Fear the Walking Dead’ Recap: Six Telltale Signs That You Can No Longer Ignore the Imminent Zombie Apocalypse 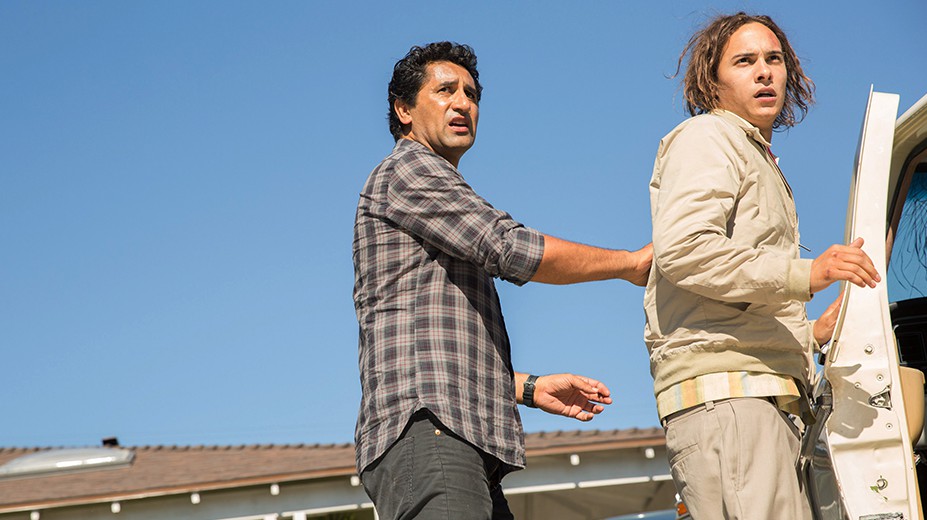 “When civilization ends, it ends fast.”
—Tobias the Wise, on the eve of the Great Collapse

So that sad, twitchy kid, the one who showed up for what would be his last day of high school packing a kitchen-drawer shiv and babbling about how the YouTube videos of bullet-absorbing super-criminals and the reports of mystery flus and viruses and microbes were all connected, had it right all along. If you were the attentive sort, you would’ve seen the truth in that forlorn look in his eyes last week, as he stared out the window of the bus ferrying the student population away from a still-abstract potential danger, a look that showed us he was the lone passenger who realized that bus was nothing more than Charon’s boat pimped out with a new yellow paint job. He knew, even then, that something terrible was about to grab hold of a frayed thread and unravel the entire warm sweater of society before anyone bothered to notice the sudden chill.

In Week 2 of Fear the Walking Dead, civilization is indeed ending fast. The kid got it right, even if the rest of the world is playing a tragically slow game of catch-up. But the signs are now all around them, unavoidable at every turn, for anyone else who bothers to open their eyes and notice that the zombie apocalypse is quickly dawning, and that soon our big-city folk will be no better than the plucky rubes wandering the Georgia countryside in search of shelter that won’t be compromised overnight, trying their best to fight off the uncomfortable certainty that they’d be better off letting one of those shambling things eat their annoying, seemingly unkillable pubescent sons. Here are those warning signs as presented on Sunday night. Continue to ignore them at grave personal peril.

1. Your boyfriend is very sick, but tells you it’s OK to leave his bedside.

It fees like only yesterday that you were inseparable. Sorting out a future complicated by college plans, cuddling high above an empty high school football stadium, drawing meaningful, lovey-dovey squiggles on each other with Sharpies. But then things changed, and changed quickly — you were uncharacteristically stood up at the beach, then your increasingly desperate and concerned texts went unreturned. The strangest part of all: When you finally found him, bedridden back at home with some incapacitating illness, he was all, “I’m fine, just leave me here until my parents get home from out of town, my insides probably won’t liquefy and pour out through every orifice before they show up,” instead of, “Can you sit here and hold my hand forever? Maybe grab me some SunnyD from the fridge?” Sick boyfriends are enormous, runny-nosed babies. It should have been obvious when he gave you permission to leave with your overprotective folks instead of stay and coddle him that something was gravely wrong. If you ever get to see him again, you will probably have to stab him through the temple with the business end of that Sharpie. How could you be so blind to his suffering? And how did you not notice his unsettling resemblance to that kid from The Wire until now? Something is very, very wrong.

2. There are an unnerving number of cancellations for the bouncy-castle birthday party across the street.

Here’s the thing about bouncy-castle birthday parties: There is no such thing as a bouncy-castle no-show. If there is a bouncy castle on your front lawn and children have been invited to work off their sugar highs inside it, parents are going to make sure their kids are pinballing around inside its rubber-and-mesh confines until somebody refunds a stomachful of frosted dinosaur cake. Fine. One kid stays home with a mom who’s a little skittish about that one-star Yelp review accusing the bouncy-castle rental company of not properly sanitizing it between uses? But more than that and you’re right to worry about the imminent collapse of society. By nightfall your husband — did you notice that nasty cough he developed right before the party? — will be chasing you around the yard with a murderous hunger in his bloodshot eyes while the neighbors watch through their blinds, wondering if the rental company will be able to get those nasty entrail stains out of the bouncy castle before the next party.

To Travis’s credit, he seemed disturbed by the sight of an on-duty officer pausing from the simmering riots downtown to fill the trunk of his cruiser with about a hundred gallons of fresh-out-of-the-strip-mall-liquor-store spring water. But he already had more information than average citizens, who probably quietly thought to themselves as they inched by in rapidly thickening, preapocalyptic L.A. traffic, Wow. Thirsty cop. No cop is that thirsty. They buy their bulk emergency-preparedness water at the Costco in the same two-hour Sunday-afternoon window just like everybody else in L.A. Pack up your belongings and flee to the desert immediately. Bring the earthquake kit from your garage; it should keep you alive for a couple of days if the spooked retirees around Palm Springs have already started looting the Sam’s Club.

4. The paranoid kid is stealing canned goods from the school cafeteria.

So there you are, raiding the school’s contraband closet foraging for any seized pharmaceuticals that might help the heroin addict painfully detoxing back home in your living room get through his gut-churning dope sickness intact. And then, right behind you, the very moment after you’ve crowbarred open the goodie lockup and fished out several Ziploc bags of prescription pills cadged from some inattentive parents’ feel-good stashes, boo! It’s the eerily prescient, greasy-haired junior doomsayer in the doorway, and he’s not interested in extorting a free eighth of weed or a lightly used meth pipe. All he wants to do is go nuts on the cafeteria supply room and fill up a cart with as many cans of food as he can wheel out of the place. Oh yeah, he wants his confiscated steak knife back too. That’ll probably come in handy when the hollow-eyed, ravenous hordes come for his precious canned peaches. It’s a shame he’ll probably be dead before Labor Day because he refused your offer to look after him until things blow over.

5. You have just caved in your boss’s head with a fire extinguisher.

This isn’t even the common workplace fantasy, the harmless, stress-relieving daydream that gets you from afternoon study hall to the final dismissal bell. You liked this boss. He was a nice guy who seemed to genuinely care about the youths in his charge. So when you suddenly find yourself astride him in the stairway of an abandoned place of learning, raining blow after skull-denting blow upon his head as he tries to eat the student who has failed to slow his advance with a series of ineffectual puncture wounds, it’s time to ask yourself: “How many loving-but-tough guidance counselors in how many schools across the country are trying to lobotomize their principals with fire extinguishers right now? It can’t just be me, right?” And as the answer comes to you, possibly in the form of a wheezing prophesy from the very kid who nearly became a hot bag of lunch meat moments ago, it’s in your best interest to listen this time. And to start thinking about how you’re going to get those brain-smears out of your clothes when you get home. Your family might start asking questions about your potentially concerning, hair-trigger readiness to visit fatal blunt-force trauma upon the noggin of a coworker if they notice your jacket is covered in blood and flecks of gray matter before you can get a good soak going in the bathroom sink.

6. You are trapped in a barbershop during a riot with a very nervous woman praying and lighting candles.

Sure, it was kind of the skeptical, but welcoming enough, proprietors of a local family business to let your family ride out this whole riot deal behind the corrugated steel gates separating fresh chaos from what will prove to be the last vestiges of order. But would the nice lady praying in front of all those candles maybe take it down a couple of begging-the-Creator-to-spare-their-immortal-souls notches? It’s started to unnerve you a little. Indeed, the request seems rude at best and profoundly offensive at worst, but it’s starting to feel like the entire world is coming apart just outside those gates, and the sobbing litany of Hail Marys by flickering candlelight isn’t really helping anyone. Oh my god, did she just dramatically blow out all the candles? No no no, that’s not what you were asking for, not at all. That is not good. Does she not realize how on-the-nose a symbolic gesture that is, snuffing out the light of civilization right before the closing credits? They’ll be lucky if anyone gets out of that barbershop alive now. It’s going to be all scissors fights and broken jars of Barbicide and rolled up, months-old copies of Playboy rattling off jaws from here on out. Somebody find a fire extinguisher. It’ll get the job done a lot quicker than a Playboy.