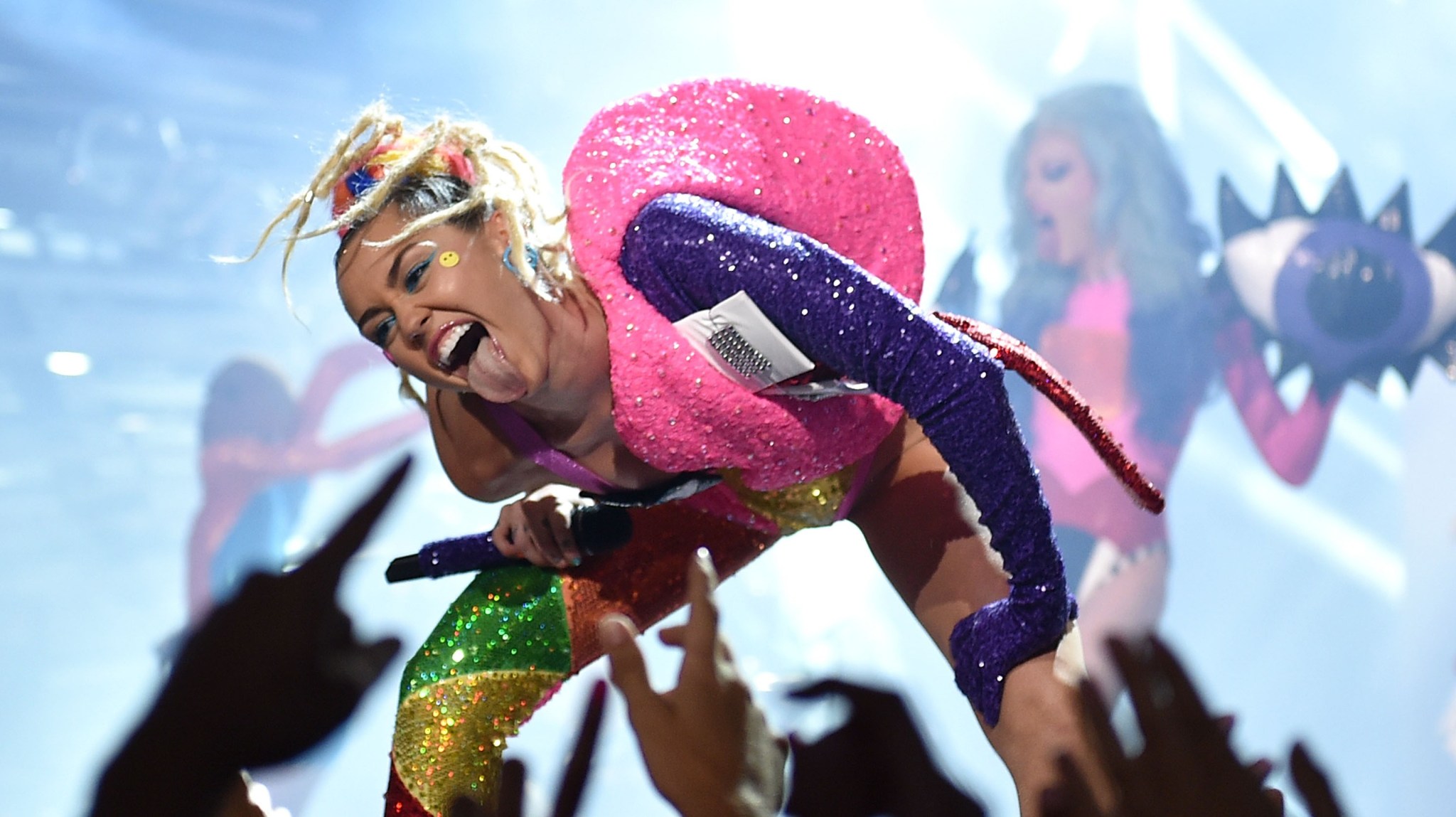 The 240th MTV Video Music Awards happened last night. The show has changed a bunch since that first airing in 1776, back when those 13 colonies declared their independence from Britain and then Madonna performed “Like a Virgin” and Abraham Lincoln won Best Hip-Hop video for his tendentious “A House Divided,” featuring Kendrick Lamar. Super racist things are still happening, but women are allowed to enter the workforce now, so I suppose that’s at least one good thing.

Miley Cyrus was the host last night, a sentence I feel silly even typing because you for sure already knew that. Other things you likely already know: Kanye West accepted the Video Vanguard award, which is probably the only award of the show that matters outside of the show.

In doing so, he announced his intention to run for president in 2020 — the only part of his speech that anyone seemed to care about because people are dumb. Taylor Swift won things because that’s what Taylor Swift does because Taylor Swift is fucking undefeatable in an awards show setting. Nicki Minaj was marginalized because that’s what they do to Nicki Minaj. And some other background people were there doing other background people things.

Some notes from the show:

Miley Cyrus as a presentation is like all of the ideas that Lady Gaga decided weren’t clever enough to be interesting, except mushed into a person.

The Most Offensive Thing Miley Cyrus Did

Second runner-up: She tried to tell a joke.

First runner-up: She wore fake white dreads. The only time the right answer to a question asked of a white person is “Dreadlocks” is if someone asks, “What’s the worst thing you could put on the top of your head, white person?” I’m not sure if fake white dreads are more offensive than real white dreads, but I do know that they are both way up on the FOH scale, losing out only to …

Winner: She called Snoop Dogg her “real mammy.” For real.

The Most Offensive Thing Someone Who Wasn’t Miley Cyrus Did

This goes to whomever the person was who scheduled A$AP Rocky and Twenty One Pilots to perform. Nobody asked for that, man. Nobody.

Let’s Give Out a Single Award and Let’s Call It the “Why Was He There?” Award

The Worst Imitation of a Previous Awards Show Moment

A young person gets famous. Then more famous. Then more famous. Then he starts making bad decisions. And more bad decisions. And more bad decisions. And people decide they don’t like him that much anymore. And at first, he’s halfway repentant. But then he decides he’s going to just lean all the way into the villain role. And so he does that. Then he realizes that he wasn’t built for the villain role. And he wants to make a proper comeback. So he does a bunch of stuff to try to build his brand back up. And after he’s done that, his team schedules a performance at an awards show. And he goes out there and does his performance. And then at the end of it he starts crying.

I liked it better when Chris Brown did it five years ago at the 2010 BET Awards.

(Now, TO BE CLEAR, Chris Brown spent the next couple of years undoing that moment.)

(I hope nobody does, actually.)

(Not even Justin Bieber.)

(Not fake crying Justin Bieber, though.)

The Saddest Stat of the Show

Kendrick Lamar, the most exciting and most talented new rapper of the past half-decade, has been nominated for eight VMAs since 2013. His only outright win happened last night, but it was for Best Art Direction for “Alright,” which they don’t even bother to show on TV because nobody knows (or cares) what it is. The only award he’s won that actually gets shown on TV happened last night, too, though. It was when Taylor Swift won the Video of the Year award for “Bad Blood.” Kendrick has two verses in that song, but is only in 25 seconds of the video.

Was the Confrontation Between Nicki Minaj and Miley Cyrus Real?

I don’t think it matters if it was real or not. What matters is that it happened, which allowed everyone to get at least a little bit racist on Twitter and Facebook last night, and that’s all anyone really wants to do anyway. I mean, that’s mostly a joke, but it’s a little true. Really, this whole situation is super convoluted and very confusing. Because what Miley did to Nicki to make her upset is essentially the same thing that people do to Miley.

When the MTV VMA nominations came out earlier this summer, Nicki Minaj was upset that “Anaconda” was not nominated for Video of the Year. After a bit of buildup, she alluded to how maybe MTV doesn’t value and appreciate women who aren’t built a certain way (she specifically said “slim,” and implied “white”). A bunch of stuff happened on Twitter. Miley Cyrus was asked about the whole situation by the New York Times. And when Miley answered, she cleared away the (very serious) allegations Nicki made, instead focusing on the manner in which they were delivered. She said: “I saw that. I didn’t really get into it. I know there was some beef. I don’t really know. There’s a way to talk to people. … What I read sounded very Nicki Minaj, which, if you know Nicki Minaj, is not too kind. It’s not very polite. I think there’s a way you speak to people with openness and love.” And this is where it gets confusing.

What Miley’s doing to Nicki here is just tone policing; taking the ideas Nicki’s talking about and focusing on the way they’re being presented instead. And that’s (basically) the same thing that people do to Miley.

I don’t hate Miley Cyrus but I also don’t like Miley Cyrus. She is just there, a figure in the universe; occasionally unavoidable and 80 percent naked a lot of the time. There are of course things that Miley Cyrus does that are wonderful. She has a long reputation of being extra charitable. And her willingness to aggressively campaign for LGBT rights is for sure admirable. There are more and more instances of her doing good things. And I appreciate those things about her. I suspect most people do. But I also suspect that those who don’t appreciate those things about her use her doofy outfits and accelerated clownishness to dismiss her ideas. It’s tone policing, just a different kind.

I don’t know, man. Nicki was right.1 I hope she was being serious.

I Guess Kanye West and Miley Cyrus Are Kind of Similar …

… but Really Kanye West and Miley Cyrus Are Very Different

Miley Cyrus is the worst kind of controversial, which is to say the fabricated kind.

Kanye West is controversial as a byproduct of his own mania, which is to say it’s natural, which is to say it’s enjoyable. He gave about a 10-minute speech after he accepted his Video Vanguard award. During it, he explained why he interrupted Taylor Swift at the 2009 VMAs, but really he was explaining why he does all the crazy shit that he does. To distill it down to two main points:

Kanye West is smart. Him giving his speech here was for sure the best part of the show. It was the most vulnerable I’ve ever seen him. I’m excited that he’s at this part of his career. The thing that Miley did to Nicki, and that Miley has had done to her, the tone policing thing — that’s Kanye, too. His speech seemed to be the moment when he was able to address it most readily, and most steadily. It was remarkable watching him talk, watching him consider the magnitude of his actions in real time.

George W. Bush has said that Kanye saying he didn’t care about black people after Hurricane Katrina in 2005 was the worst moment of his presidency. And then after Kanye had absorbed all of the fallout from his interruption of Taylor at the VMAs in 2009, he talked a few times about how overwhelming that was and how he could empathize with Bush now.

Kanye West has always made it easy for people to dislike him away from his music. Last night was the first time I’ve ever seen him step the other direction. It was fascinating.

Stepped-on Scorsese: It May Not Be Pure Product, But ‘Narcos’ Will Get You High

‘Fear the Walking Dead’ Recap: Six Telltale Signs That You Can No Longer Ignore the Imminent Zombie Apocalypse