Stepped-on Scorsese: It May Not Be Pure Product, But ‘Narcos’ Will Get You High 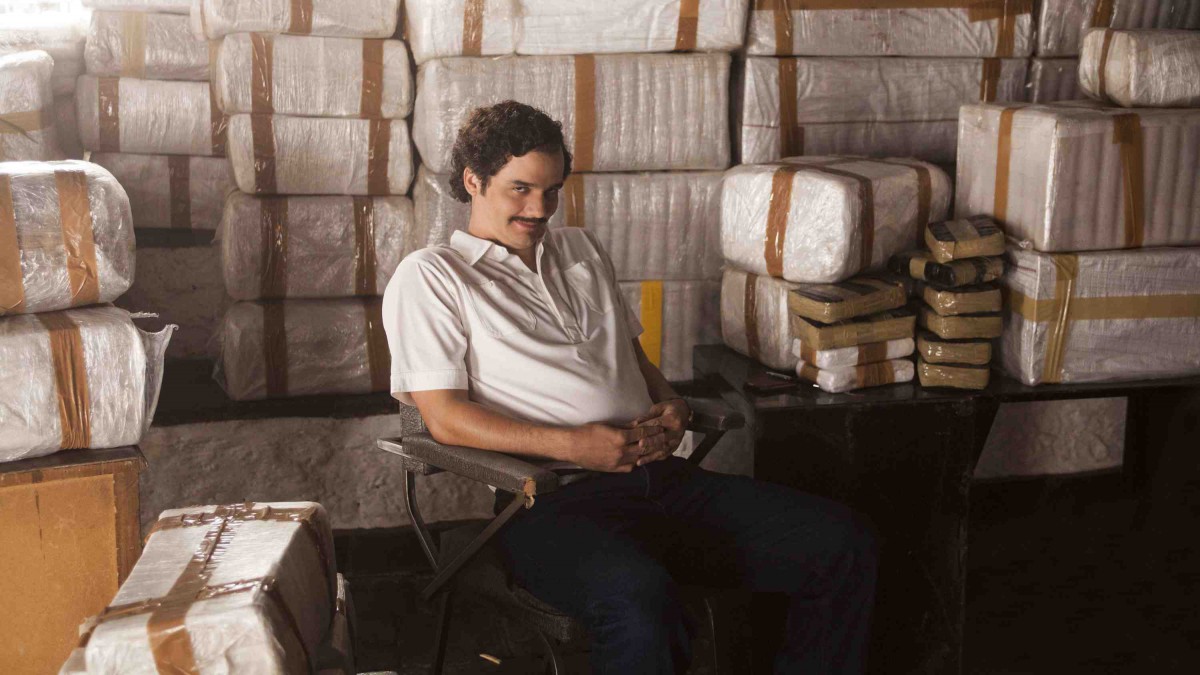 The best way to gauge the relative health of an economy isn’t by taking a snapshot of the wealthiest individuals. It’s by investigating the living standards enjoyed by everyone else. Similarly, for all the recent hand-wringing over the notion of “too much TV,” it’s probably best to stop looking at the margins — the precious few truly great shows, the generous handful of truly bad — and consider the swollen middle. It’s likely that there have been eras with larger concentrations of transcendent programs airing simultaneously.1 But there has never been so much glorious OK-ness. If you’re looking for something to fall in love with right alongside everyone you know, you might be out of luck — but if the only taste you’re looking to satisfy is your own, the future’s never been brighter.

That’s what I was thinking, anyway, as I snorted my way through the first seven episodes of Netflix’s Narcos. (The full, 10-episode season began streaming on Friday.) The show isn’t particularly “good” in any traditional sense. The plot lurches around, the cast is riddled with stiffs, and the writing doesn’t often live up to the considerably agitated narcotraficantes that inspired the series. And yet I found myself enjoying it far more than the previous caveats would suggest. Why? Because like any decent dealer, Narcos keeps offering a hint of the quality stuff to keep me sweet.

It helps, of course, that I’m an easy mark. My weakness for ‘80s period pieces is well known. I love sprawling drug dramas, from Scarface to Breaking Bad, and have a real affection for shows that care enough about their subject matter to set their productions at the source. The entirety of Narcos was filmed in Colombia on location, and the sight of Medellín at night, its lights glittering like a thousand jewels menaced by dark, foreboding mountains, says more than any exposition-heavy teleplay ever could. And I appreciate how, not unlike The Bridge, Narcos allows its Colombian characters to speak entirely in subtitled Spanish. These little details and considerations add up over time. Narcos is no symphony, but it’s playing the right notes.

Is this a ringing endorsement? Not exactly. But, in 2015, there’s something to be said for a TV drama that knows its target audience and seems content to service it. Outside of an odd — and expectation-raising! — opening chyron that defines “magical realism,” Narcos doesn’t demonstrate much aesthetic ambition. If anything, it aspires to a verité-like flatness; news-camera footage of the real-life inspirations for major characters is cut, like baking soda, into the mix. The series is largely based on the historical record, dutifully tracing the rise of cocaine use in the United States during the Reagan years and the subsequent explosion in manufacturing in Latin America. The show’s politics are admirably unsentimental: The U.S. government, by and large, is portrayed as either foolishly naive or cruelly calculating. Despite Nancy Reagan’s “just say no” rhetoric, her husband refused to get involved in the Colombian drug problem until it could be demonstrably linked to communism. Narcos catalogues the horror show of blood, addiction, and corruption that filled the ensuing vacuum with relentless, almost numbing precision: By Episode 6, I was surprised anytime a backseat passenger wasn’t gunned down by a hit man on a motorcycle.

What personality Narcos does have comes from the involvement of former DEA agents Steve Murphy and Javier Peña — played in the series by Boyd Holbrook and Pedro “Go Tell It on the Mountain” Pascal — both of whom served as consultants. Which is another way of saying Narcos doesn’t have much personality at all. Holbrook’s Murphy, a Southern-fried cattail with a droopy-dog mustache, narrates every episode like he’s trying to soothe a rattled steer. (The majority of his bromides — “Don’t call me a bad guy just yet”; “This was my war, this was my duty” — seem culled from my personal list of prestige TV pet peeves.) The charming Pascal fares better as Peña, sucking on cigarettes like they contained the antidote for what happened to his character on Game of Thrones. English actress Joanna Christie plays Murphy’s wife, Connie, in the same way that a Colt .45 plays Murphy’s gun: They both are present and seem well suited to the material offered to them.

As is often the case with stories like this, the villains get to have more fun. Though, it should be noted, still not all that much fun. Brazilian actor Wagner Moura is a hypnotic presence as Escobar, an oddly charming bear of a man who seems reasonable, even when ordering death on a Mephistophelian scale. (It actually helps that Moura isn’t a native Spanish speaker. He grumbles his dialogue in a furry, almost alien manner that helps him to stand out among his murderous peers.) Juan Pablo Raba is terrific as Escobar’s cousin and consigliere, Gustavo, and Luiz Guzmán (Boogie Nights) and Bruno Bichir (The Bridge) are deliciously unpredictable as fellow criminals. But it’s worth noting that unlike nearly every other drama about the drug trade, Narcos doesn’t have time for the louche digressions into the high life that can be as entertaining as they are clichéd: pinballing eyes, white lines cut on lithe bodies, the party that never ends until, suddenly and violently, it does. Most of these traficantes — who, the series reminds us, were at one point grossing $60 million a day smuggling powder — abstain from their own product and, by the time the DEA gets involved, are too stressed out to enjoy their wealth. “Es negocios,” they say to one another, often. And, truly, the series is as well. 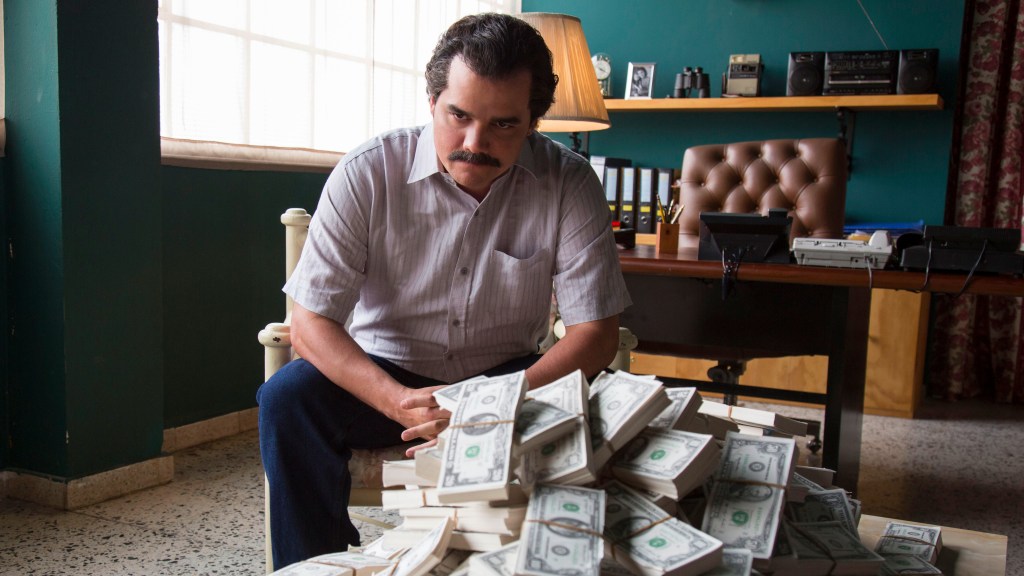 Because the strangest thing about Narcos is that it often feels more like business than art. With its yeomanlike dedication to telling the whole story, it often glosses over the smaller, more personal ones that can help extract emotional resonance from the enormousness of real life. Director Jose Padilha (Elite Squad) unspools the first, and best, episode of the series with real kinetic flair. His camera swoops and dives like an acrobat across dozens of tiny vignettes — from weed-carrying hippies in Miami to Pinochet-backed death squads in Chile. Sure, it’s stepped-on Scorsese, but the rush it provides is real. But later installments can’t quite quit the gimmick. At times Narcos plays like a well-intentioned reenactment — call it Zooted History. When an actual B-plot breaks out among the Murphys in Episode 6, it felt like a mistake, though not an unwelcome one.

One of the more compelling arguments for our current tsunami of scripted content — approaching 400 series in 2015 alone! — is that the audience is now able to see dozens if not hundreds of projects that wouldn’t have made it past the medium’s traditional gatekeepers. I’d argue that Narcos is fascinating in a more nuanced way. We can actually see the reasons why the series wouldn’t have flown on, say, HBO. There’s no question that creators Chris Brancato, Carlo Bernard, Doug Miro, and Paul Eckstein — all Hollywood veterans, with Law & Order and the Prince of Persia movie in their CVs, among other things — have a crackerjack story and a workable style with which to tell it. What they lack is any sense of boundaries: What is the best version of this story? What parts could be cut? What parts could be combined? Transcendent TV shows begin at point A and then use creative momentum to detour into outer space. Narcos, by contrast, keeps plugging away in pursuit of point Z. It is, at once, an argument for and against Netflix’s generous development model, in which ambitious creators are left more or less alone.

Perhaps that’s because many of Netflix’s viewers will be similarly isolated, parked on their couches, punching their remotes for another quick hit. Because despite my many criticisms, there is absolutely no question that I’ll be watching the rest of Narcos. The only reason I stopped after seven is because my deadline was looming. Narcos is unquestionably the type of show Netflix ought to be investing in: expansively international, splashily violent, able to tap directly into a preexisting fan base. It’s enjoyable even when it’s not particularly inspiring. Like a lot of TV during these boom years, it’ll get you high. Just not necessarily high enough.