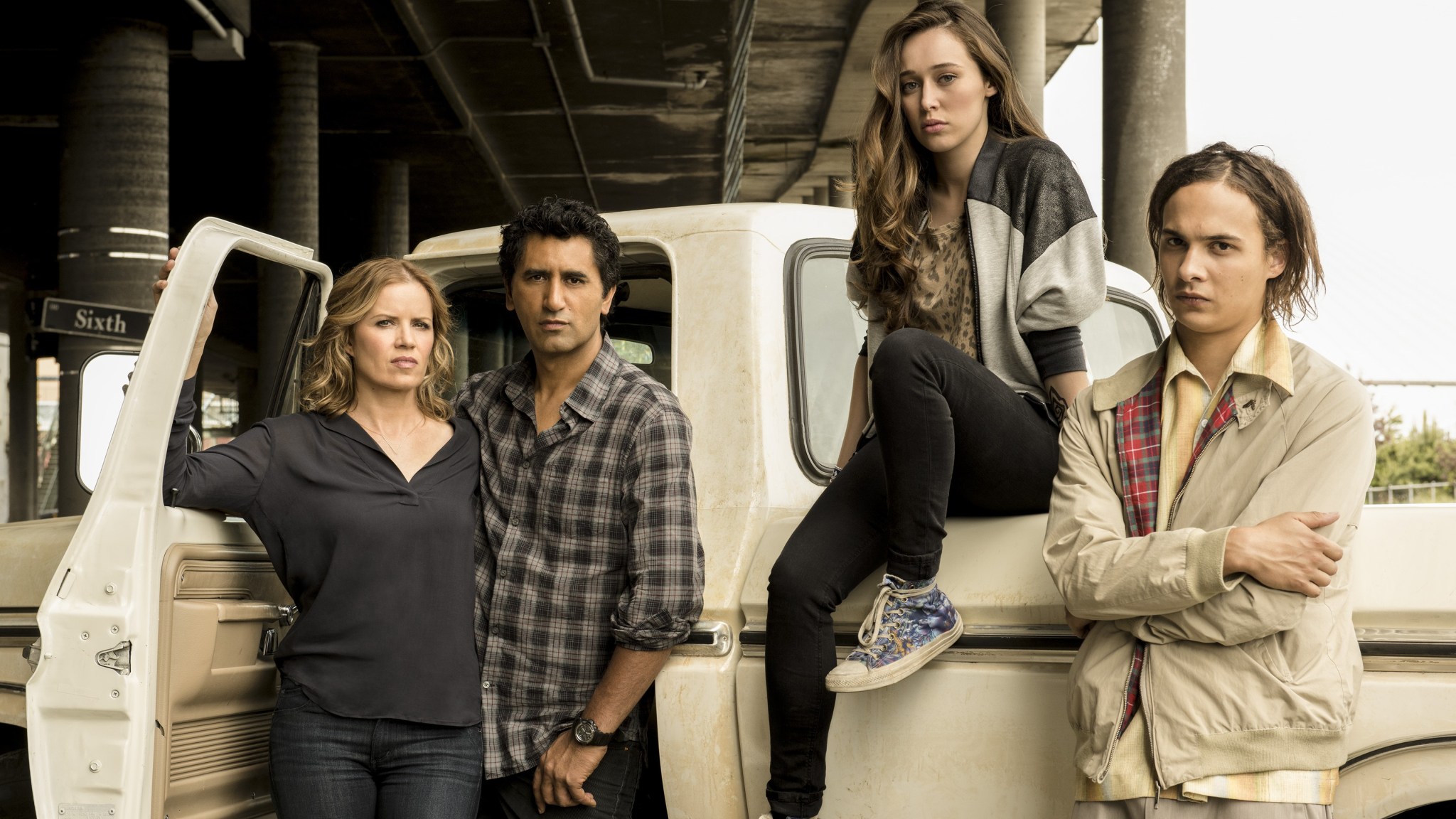 Fear the Walking Dead, the much-anticipated prequel to the blockbuster series we all must now awkwardly refer to as The Regular Walking Dead, finally arrived last night, ensuring that virtually every Sunday on the calendar going forward will end in some kind of AMC-branded, zombie-related programming, lest a hit-starved network be accused of not using every part of the undead buffalo. And, as promised, this time around it’s L.A., not the ATL. It’s the infected, not walkers. It’s the beginning of the end of the world as we know it, not the zombie-infested ruins of a civilization utterly decimated by a mystery virus. Fear aims to depict a time and place when every hacking cough is a raised-eyebrow fit of foreshadowing, every tragically, ironically blasé reference to the super-flu a missed opportunity to contain the disease that will soon wipe out most of the Earth’s population, reanimating its victims as ravenous, hollow-eyed avatars of their former selves. As they say: good times, good times.

And so we embark on this preapocalyptic journey with a new cast of characters in a new setting — hey, it’s the city we live in, we totally recognize it, neat! — to watch the presumably slow unraveling of a society we already know to be doomed before the cold open even gives way to the opening credits. We know that the eventual finish line lies somewhere near the abandoned prisons, lonely farmhouses, and cannibal-chic train depots of the greater Atlanta area a few years hence. Still, here we are, asked to invest in these fresh, eventually-to-be-messily-devoured faces and to suppress — to some degree, at least — our natural instinct to scream “YOU HAVE TO SHOOT THEM IN THE GODDAMN HEADS, DUMBASSES!” as we watch this clueless class of neophytes fumble through the trial-and-error phase of their remedial zombie survival training. But even as we try not to roll our eyes at every attempt to halt the inexorable advance of the infected with useless quarantines and/or hails of bullets absorbed harmlessly by rotting torsos, there’s another, all-consuming urge that’s impossible to ignore: our insatiable desire to figure out which one of these new folks is going to die soon, then rise right back up to confront the disbelieving survivors with the reality of their hopeless predicament.

Last night’s pilot episode gave us a scant three biters to tide us over until the meaningful carnage, a token appetizer plate stocked with an unfulfilling spread of a hipster junkie, a briefly glimpsed YouTube sensation who’ll never get to enjoy his viral fame, and a dealer who’s watched too many movies featuring unimaginative executions down by the L.A. River. Fine. We get it. We need to spend a little bit of time with these people for their eventual demises to hurt. But that’s not going to stop us from handicapping which of the main cast we met Sunday is getting got before the end of this six-episode cycle. Indulge us as we try to anticipate the initial gut-wrenching loss — or losses — that awaits us before we’re returned to Rick, Daryl, Carol, and the gang in mid-October. 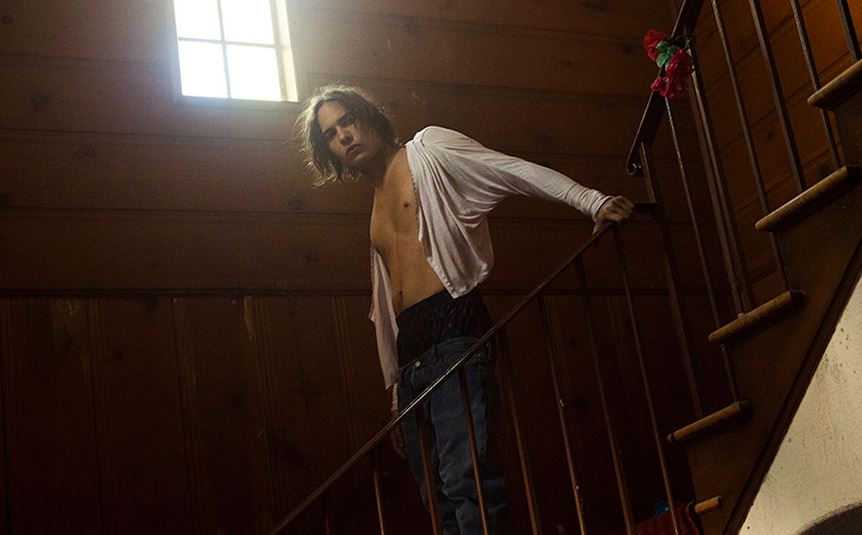 The pilot begins with Nick, a beautiful but troubled addict, coming out of the history’s worst heroin nod to discover that something is very, very wrong inside the “shooting gallery” church that was apparently a safe, if meticulously production-designed, space for Silver Lake’s discerning smack-enthusiast community.1 Shades of Rick awakening from his coma in The Regular Walking Dead’s first episode? Obviously. But Nick’s no Rick. We’re looking a little further down the Grimes generational chain here, and he’s got the stench of New Carl all over him, immediately putting his family in danger with his poor and impulsive decisions: escaping the hospital where he was detoxing, seeking out his dealer for another score, luring his loved ones into a riverside confrontation with their first infected person. If he’s our Carl, we may never get rid of him, and we might still be trying to figure out if he looks more like Taylor Kitsch and a young Johnny Depp’s baby grown in Keanu Reeves’s man-womb or Lou Taylor Pucci’s long-lost fraternal twin deep into Season 5. In any case, we will likely be tired of his antics 45 minutes into next week’s show. 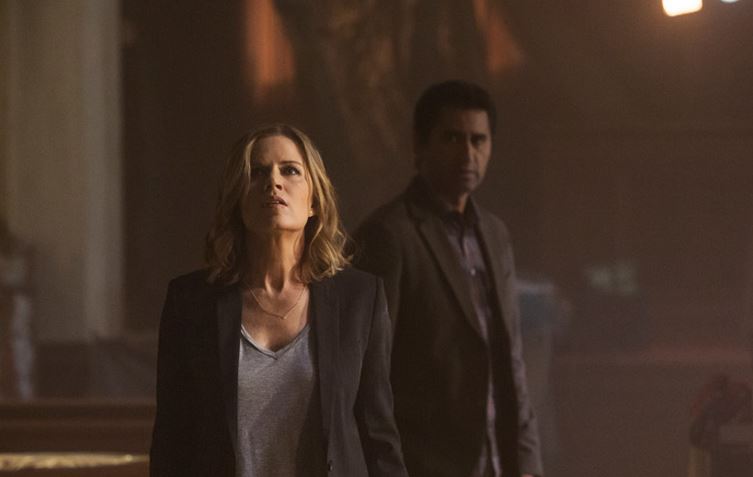 Madison is the kind of guidance counselor who doesn’t narc on an awkward kid for sneaking a steak knife into high school to deal with bullies — she asks who the schoolyard shiv is intended for. She’s the kind of mom who doesn’t give up on her troubled son, even as she wonders if it might be time to change the locks on the house. She’s also the one who’s initially ignoring that awkward kid’s warning about the imminent end of everything, who’s not so sure that her son’s story about the girl who ate some junkies back at the church/crafts collective wasn’t merely a drug-induced hallucination. Maybe, just maybe, these blind spots will be her quick undoing.

But: Nah. Let’s get something straight right now: Kim Dickens did not sign up for the zombie show to go six and out. She got through 38 episodes of Treme without being turned into a short-order cook at a tourist-trap beignet counter. She got through Gone Girl without David Fincher or Ben Affleck breaking her. She got through House of Cards without swiping away Kevin Spacey’s vintage microphone and hurling it across the set to halt his constant between-takes Bobby Darin impressions. She’s in this for the long haul. And she’s a survivor. She’ll be our Carol. Or our Rick. Or some glorious combination of the two — the clear-eyed leader who keeps everybody alive, and the once-gentle, tragedy-hardened mother who’ll bury somebody in the garden when the time comes. 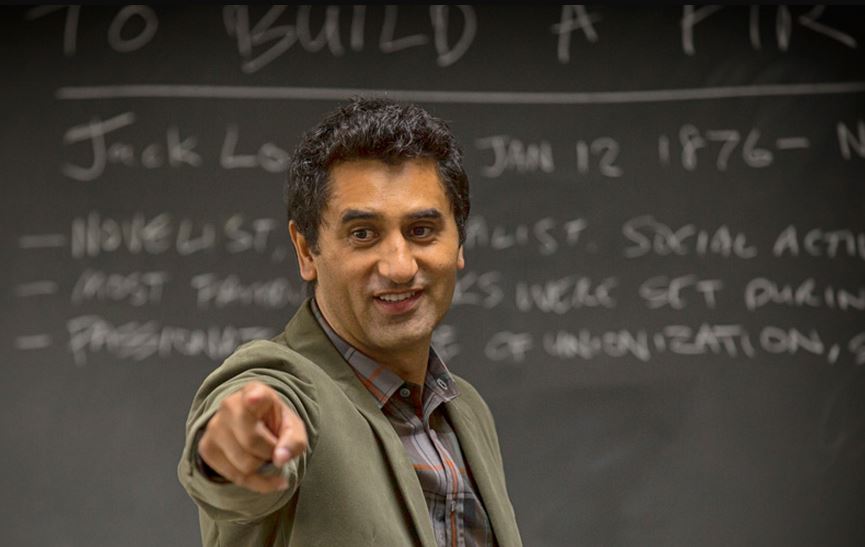 Is there any faculty member less useful in an apocalypse than an English teacher? Even if he’s clutching a dog-eared copy of his favorite sophomore-level Jack London novel? Pro tip, Trav: To Build a Fire is not a survival manual, even if it’s of great use as a thematically obvious prop in a high school classroom as the first gusts of fetid zombie-wind try to blow out civilization’s flame. Still, it seems like he’s sticking around for a while. He was brave enough to crash junkie communion to try to investigate Nick’s heroin-fueled delusions. He was willing to sit at his stepson’s bedside as the junk worked its way out of Nick’s system, and he was even willing to guilt his biological son Chris into doing the same. True, in the Walking Dead universe, bravery often gets you undead. But Travis has two families to take care of. He’s probably not our ritualistic sacrifice to the gods of Please Let Somebody Get Eaten Soon, I Appreciate All of This Character Development, But It’s Time to Start Pulling Out Some Intestines or I’m Going to Flip Back Over to See If Oscar Isaac’s Solved Yonkers’s Housing Desegregation Problem on HBO Yet. 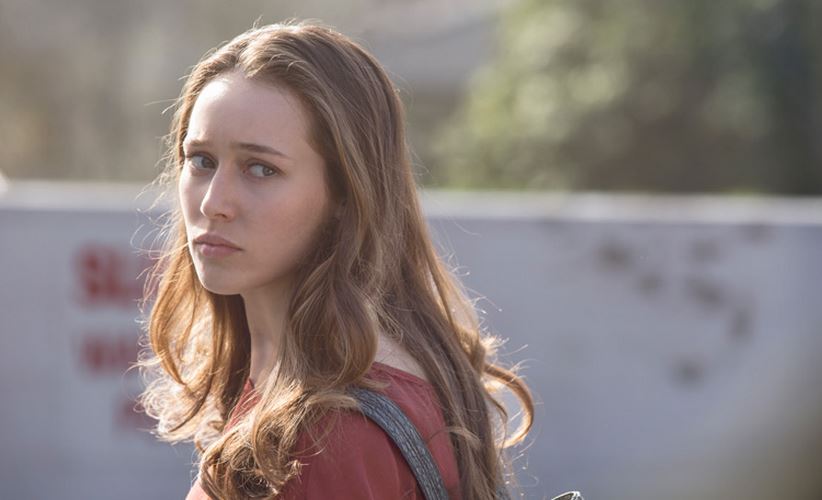 You’re the “good kid,” eh? Off to Berkeley, huh? To prepare for your bright future in a world not at all ravaged by the shuffling, flesh-gobbling corpses of your fellow sociology majors?

Open your locker. See those Biter Beat photos of Maggie and Beth taped to the inside of the door? Please ignore that they’re characters who won’t exist for at least a couple of more years and answer this very simple question: Which one do you want to be? Maggie, huh? Well. Good answer. Bad news, though: We think your Glenn is already wandering the Venice boardwalk, trying to eat a guy selling hand-painted bongs on a dirty blanket. And life is only going to get more disappointing from here. Maybe don’t fight so hard and your suffering could be over by early October. 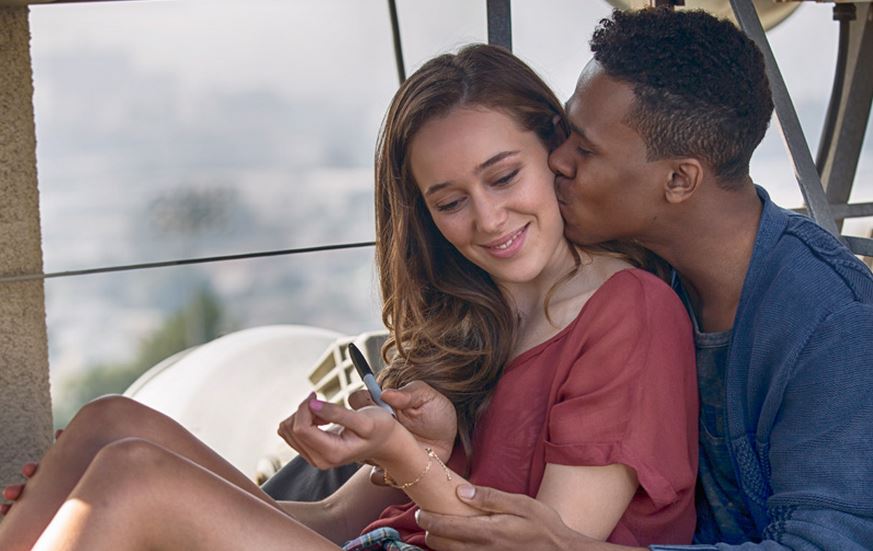 Remember Matt? Oh, did you not catch his name? You’re forgiven. He got in his couple of scenes before quickly disappearing into a foreboding ether of unanswered text messages from the girlfriend who was expecting to watch the sun set over the Pacific and then retreat to his unchaperoned house for a magical evening of Sharpie-doodle body art and please-don’t-find-a-new-hippie-boyfriend-by-the-end-of-Berkeley-orientation pleading. Poor, poor Matt. We at least hope the bong vendor didn’t taste like patchouli.

Our teen Cassandra showed up to what might be his last day of high school carrying a knife and a backpack full of tragically unheeded warnings about the plague to come. Nobody’s going to college, he says. Nobody’s doing anything they think they are, he says. It’s all connected, he says, the reports in five states, the viruses and the microbes and the guy on YouTube getting shot a hundred times but not going down. But nobody’s listening. And so the last time we see young, vulnerable Tobias might be through that grimy window of the yellow bus ferrying some unsuspecting students away on an emergency half-day, his quivering eyes telling us he realizes they’re all just the creamy filling in a giant metal Twinkie if that thing gets a flat tire at the wrong intersection. 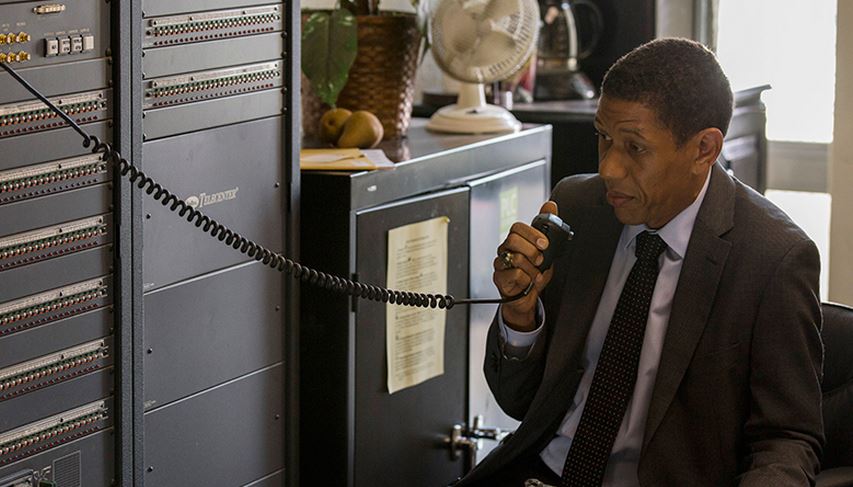 But if Zombie Tobias makes it back to school next week, there’s a better-than-average chance he’s going to be wearing Principal Costa’s gallbladder like a fun little hat. 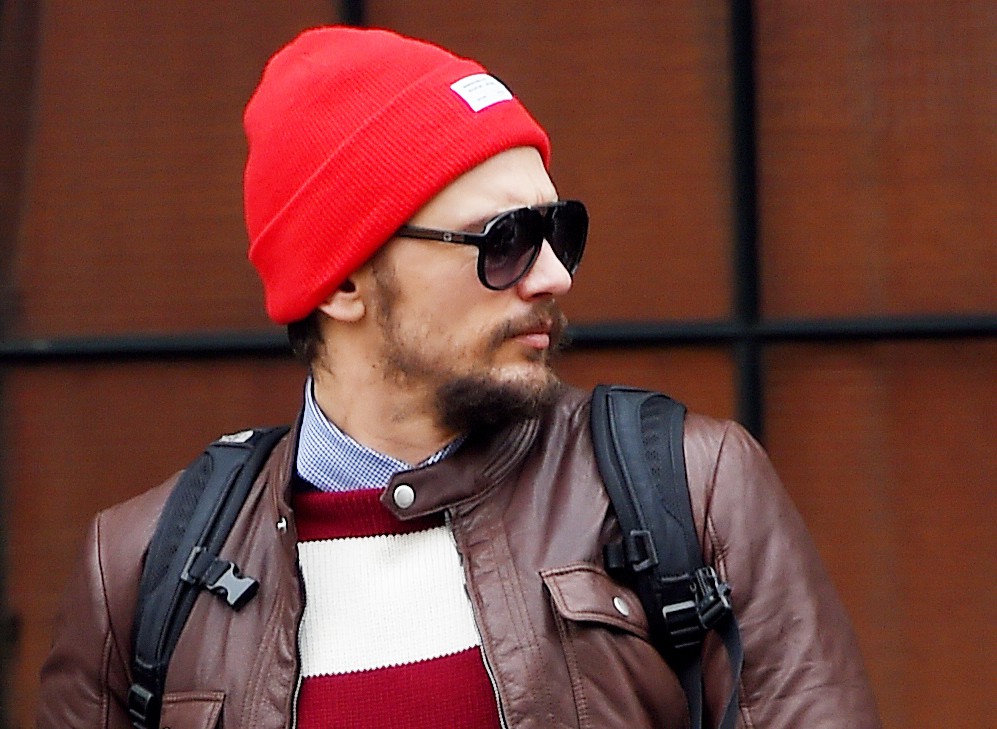 What? This thing takes place in L.A. Somebody famous is getting eaten, and soon; there won’t be time to relocate every A-lister inside the fortified walls of Malibu Colony before the plague claims its first Hollywood victim. You can almost see the Chateau Marmont patio slowly succumbing to panic as an infected Franco lurches from table to table, looking for a friendly face to bite. Rachel McAdams never sees what hits her, because he’s already plucked out her eyes and added them to his kale-and-pine-nuts salad.

Fine. Maybe it’s a long shot. But you don’t set this show in Los Angeles if you’re not going to exploit the city’s greatest natural resource: actors looking to get a piece of a hit franchise.

Odds of Infection by Episode 6: 500-to-1 (Odds Franco’s Zombie Directs a Behind-the-Scenes Documentary of His Transformation to Undead Performance Artist: 1-to-1)