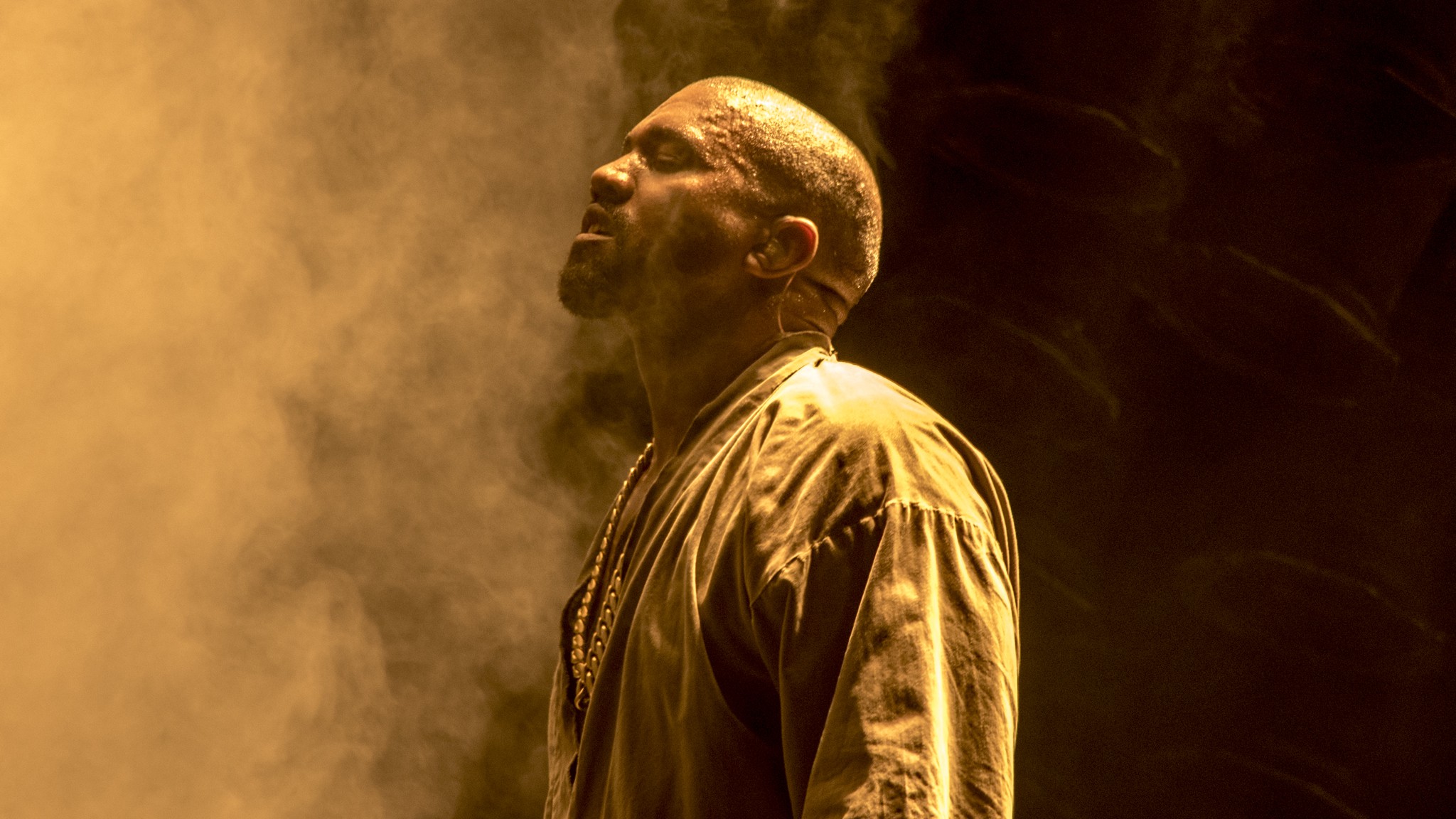 The first thing you notice about Kanye West’s stage setup is the fog. Does there have to be so much of it? The artist in question is not shy, which raises the question of why he feels the need to obscure himself in a pea soup haze for the entirety of his set. Throughout Yeezy’s performance at the 2015 FYF Fest in Los Angeles this past weekend, I kept thinking he’d stumbled into the “Smells Like Teen Spirit” video and couldn’t find his way out. But really, you can see him. Kanye’s got a way of making himself known, regardless of the circumstances.

On Saturday, the scenario couldn’t have been more perfect for a grandiose hip-hop megastar. Frank Ocean, who has seemingly gone into a bunker in the lead-up to his delayed new album, had canceled his headlining appearance “on his own terms” — making for a perfect opportunity for a hero to fly in and earn the enduring goodwill of the sweaty throng of edgy teens and rolling twentysomethings. Enter Kanye, an act that would have been an acceptable replacement for just about anyone. The vibe inside the festival was summed up by all the conversations in the beer gardens and the bathroom lines about everyone’s dumb luck at stumbling ass-backward into a show from a guy who three years ago would never have showed his face at a local festival like FYF. Not that Frank Ocean is hurting for fans, but when given the opportunity to see someone of Kanye West’s stature, you’d do well not to complain.

In the moments prior to the performance, I shuffled into a line for cheaply made, basic white T-shirts with the date and location of the performance printed shabbily on the front and back. The haste with which these shirts were produced is a perfectly good reason for them to look a bit like bootleg merch. The headliner switch wasn’t announced until Thursday, so there wasn’t much time to throw together something memorable. Still, it didn’t matter one bit to the mass of humanity eager for tangible proof of their attendance.

If we all could have paid $35 for a postcard that said “Greetings From Yeezus” or a week-old pizza box with “You were at the Kanye show” scribbled on it in black Magic Marker, we likely would have. No one seemed to care that the crappy shirts only came in large, extra large, 2XL, and circus tent sizes. A young festivalgoer persisted in rubbing forearms with me as we crept up to the front of the line, jostling me ever so slightly in the hope that I would fall back behind him. He couldn’t wait to spend his lunch money on a shirt four sizes too big for him.

In the hushed moments before Kanye’s arrival, the PA system played “Wish You Were Here” by Pink Floyd — a suitable soundtrack for the minutes before the spaceship landed. Soon, the fog rolled in and he appeared. Any fear that Kanye would treat this fill-in festival gig as second-rate disappeared quickly. Before launching into “Black Skinhead,” he politely asked1 the stage crew to raise the bank of lights above him. He didn’t want to bang his head on them, as he revealed that he planned to get “too hype on this motherfucker.”

What separates Kanye West from those dragging ass behind him in the pop music 10K fun run is his energy. Drake might be charged up, but Kanye is a human car battery, a hip-hop defibrillator of such unquestionable power that he can cut through a cloud of smoke and still be completely seen. Occasionally, that energy is used in the service of petulance or transgression, but that’s part of what keeps us all coming back to buy commemorative T-shirts that don’t fit. What is Kanye going to do? Is he going to flip out? Will there be a volcano? History is Kanye’s hype man now. All he has to do is show up and people immediately expect a show for the ages.

Did it matter, then, that what we got was a medley of hits, a new song, a remix and a feature,2 and a couple of guest appearances3 within the confines of a perfectly normal set? Instead of pointed social critiques or unintentionally asking people in wheelchairs to “stand up,” Kanye masterfully hit every beat of the festival headliner script. The ease at which he disassembles the house and skillfully builds it back up again could and should start to feel rote or tired. It might just be that his hits are so ideally suited for the expansive vistas of the modern festival experience that it will never matter. There’s something special about hearing “Jesus Walks” or “Power” inside a sea of raised hands, with everyone singing along. These are big songs meant for big venues.

Once Rihanna came out for an allegedly unplanned cameo, Kanye seemed to actually be enjoying himself. He was practically all smiles during “FourFiveSeconds,” a rarer sight these days. He was replacing an artist who’d built a reputation on his intimate connection with audiences, so why not pop down to the level of mere mortals for a few minutes? As the show wound to a close, he made a valiant effort to burn through 10 hits in 10 minutes — a final crowd-pleasing gesture in a performance full of them. Rihanna even stuck around for “All of the Lights.” The rapid-fire barrage of pop classics fulfilled the crowd’s desire for a cathartic climax at the end of a hot day filled with interminable walking trips from stage to stage around the Los Angeles Memorial Coliseum in FYF’s awkwardly laid-out arrangement. It was a satisfying shared moment in an environment that inadvertently separates people based on their musical taste.

Frank Ocean has gotten into the habit of disappointing his fans, though. Despite the overall mood of pleasant surprise at the gift of Yeezy, there were people who weren’t so happy about the switch. Critics are not willing to let Frank ride on the goodwill from Channel Orange anymore, either. If Boys Don’t Cry is a masterpiece, all will be forgiven and this period of uncertainty might further cement Ocean as a tortured, fascinating artist. But what makes Kanye West an enduring figure in the culture is his willingness to shut up and play the hits. We want our favorite acts to periodically satisfy the base urge for the familiar, the comfortable, and the reliable. It’s why yesterday’s performance from the recently resurrected Death Grips wasn’t nearly as big of a deal as their show at the very same festival two years ago. They’ve meddled with our emotions one too many times.

After dropping hundreds of dollars on tickets and contracting festival black lung, I don’t want to be toyed with. Pull this trick again and you run the risk of people ignoring you or, worse, your becoming something of a music industry punch line. I kept thinking Morrissey would be raptured before he had a chance to get on stage, because he’s flaked on performances enough times that it’s a fair bet he won’t make it out to rip his shirt off again. Kanye West is certainly a petulant artist of the first degree, but he earned our trust years ago by being one of the great showmen of our time. Frank Ocean has yet to garner that reputation, and it doesn’t seem like he has much interest in it, either. What does interest him is anyone’s guess. In lieu of an answer from the man himself, I have to assume it’s not us.