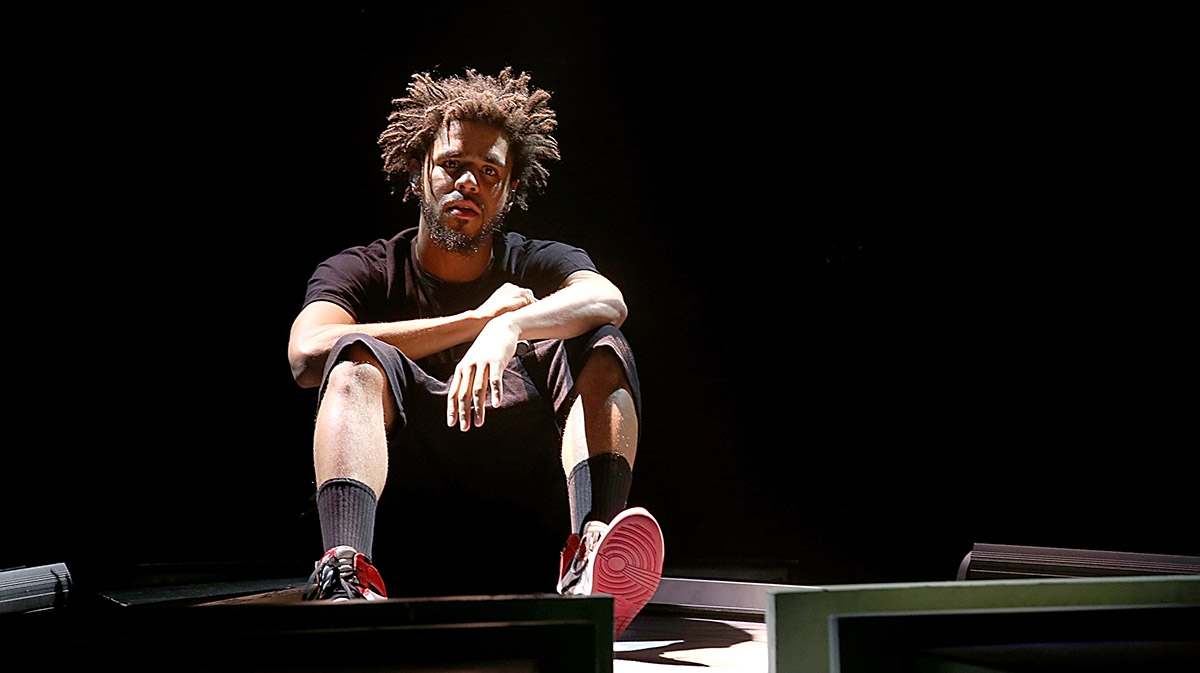 J. Cole seems like a super nice guy. There’s evidence of this, like his Dollar & a Dream Tour, where he does surprise shows in cities and charges only $1 for entry. And there’s also acts like showing up and marching with protesters following the non-indictment of Daniel Pantaleo, the officer who appeared to choke Eric Garner to death on video — lending his fame to that situation and similar situations is laudable. I even read about a guy who was planning to kill himself but then didn’t because something Cole said in the song “Love Yourz” convinced him otherwise, and if that’s true then that’s also wonderful. But I think my favorite J. Cole story is the one about him telling a girl two years ago that if she graduated from high school and got into a four-year university he’d show up to her graduation, and then he actually did exactly that and also offered to help pay for her tuition. I like J. Cole as a human. His positivity is undeniable. He has good energy. That’s the most important thing, really.

On Friday night, I hoped for a very specific thing: that a man or a woman would be able to explain to me why J. Cole is an interesting, exciting rapper. And so I went to a place where I thought it would be easy to find many people who held that opinion. A simple joke to make here would be to say that I went to “a morgue” or “a sleep factory” or “a hospital for people who were born without ears,” but none of those are places I went, and I’m not so sure that those last two are even places that exist. Where I went was to the Cynthia Woods Mitchell Pavilion for the Houston stop of his Forest Hills Drive Tour, which was sold out, same as most every other stop he’s had this year.

Here is how you find a J. Cole fan at a J. Cole concert who is willing to talk about J. Cole:

FYI: All of these are better than what happens when you say you don’t like a person’s music on the Internet to someone who does like it. I don’t want to say some of the things that have been said to me, but I will tell you that after reading some of them I felt like putting my head in an oven. Talking to people in real life about conflicting music opinions is way more fulfilling.

Before the concert and then also after the concert, I sought out conversations with a few different people whom I knew had dealt with J. Cole on multiple occasions, either in business settings or leisure settings (or both). I wanted to get some insight into what he was like beyond what I’d happened to read on my computer. Nearly all of them responded with a version of the same answer: “He’s one of my favorite people in music. He is exactly who he presents himself as.” I was always glad to hear this response. I like J. Cole as a human. His positivity is undeniable. 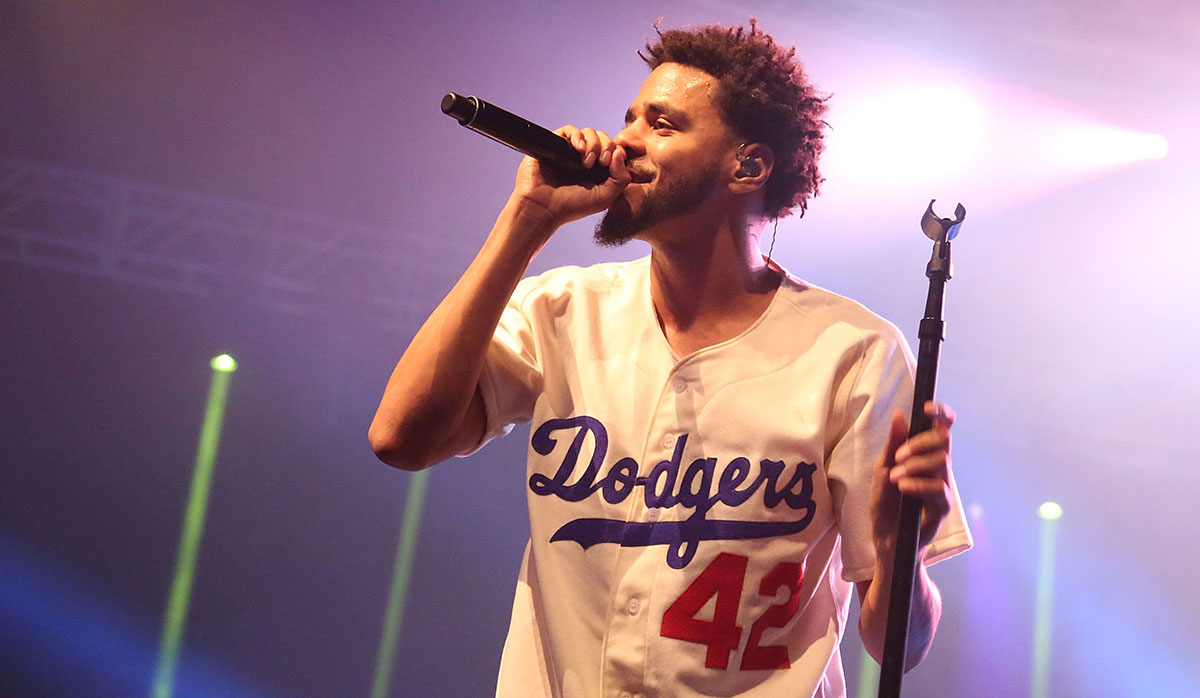 Cole is a skilled performer in concert. That’s easy to see, even if you’re not a fan of the music he performs during the show. He is confident and capable and actively charming. An example: Prior to performing “St. Tropez,” he broke off into something like a 12-minute talk about coming from a small town filled with people who had small-town ambitions and how he couldn’t even today identify where St. Tropez is on a map. He made a comment about the fanciness of the stage and its props and the LED lights, then said, “I don’t even know what the fuck ‘LED lights’ means.” It was a funny and likable and memorable moment. He’s told that same joke at each of the tour’s stops in that same way before that same song.

It’s hard to be unhappy at a J. Cole concert, even if that’s a thing you’re intending to do, which, to be clear, I certainly was not. There were nearly 17,000 people at the Houston show. It didn’t look like very many of them bothered to sit down very often during his performance. When he would start a song, everyone would lose their minds and rap a bunch of the words. There were two girls sitting in front of me who were especially animated, and next to them was a couple who were rapping the words to songs at each other, and I can’t think of a more fun thing to watch than people having fun listening to music they like.

Throughout the night, I received a bunch of text messages and tweets about being at the show, things about “Are you still alive?” and “I can’t believe all of those people have confused a warm smile and mediocre rapping with greatness.” Things like that. And you know what was weird? I began to feel semi-defensive about it. I don’t know how many jokes I’ve made about J. Cole since he started to become prevalent or prominent back around 2009. If I had to guess at a number, it’d be something like, say, 100 billion. I was literally making jokes about him on Twitter as I was sitting in my seat waiting for the show to start. So I understand why I was getting those messages. But, I mean, how can anyone really be expected not to find joy in watching so many people have so much fun all at the same time?

When I was talking to people at the show about Cole before his set started, a few common themes emerged. They would talk about him being “relatable” and “lyrical” and “honest” and “not like most of the other rappers.” The third-best pro-Cole argument I heard was from one of the 20-plus people I emailed about him during a 45-minute rain delay between Big Sean’s set (he went on right before Cole) and Cole’s set. It came from a guy who said that he had sex with a woman while listening to J. Cole three years ago and they’re still together today, so that’s a thing I can appreciate. The second-best pro-Cole argument I heard was from a tall girl sitting three seats over me. She was discussing with her group whether or not J. Cole was a good rapper and she mentioned how the things he rapped about just moved her — I’d initially thought that that was a pretty generic answer when she gave it, but during the show she was climbing up on her seat and screaming and throwing her long arms and legs around. Her enthusiasm was literal. The best pro-Cole argument came from a guy named Mark.

Mark and I spoke for several minutes about Cole. I explained to him that I didn’t like Cole’s music for this reason and that reason, and then guess what? Turns out, I already knew Mark. Before I was a writer, I was a teacher at an inner city school in Houston for nine years. I had Mark in one of my classes about six or so years ago. I didn’t even recognize him. He was 3 feet tall when I had him. He was a full-grown man on Friday. Can you even believe that? I really couldn’t.

So Mark was explaining to me basically all the same things that everyone else had — that J. Cole rapped about things and feelings that were familiar to him. He rapped about being nervous or worrying about not becoming anything bigger than what he was, and so on. And when Mark was talking I couldn’t stop remembering him as a middle school student. He was a pretty popular kid. He was tiny, but he was handsome and athletic and unafraid, and that’s a great combination of traits to have in the seventh grade. As I was thinking about all that, just that moment, I experienced just a bit of self-doubt. It felt like, “Wait a second. J. Cole is lackluster, right? Uninteresting, right? Faux-insightful, right? Or have I been wrong about this all this time? Do I just not get it? Is J. Cole actually good? OH MY GOD IS J. COLE ACTUALLY GOOD?” When someone asks me why I don’t like J. Cole, my main instinct is to recite a line from an old DMX song where he rapped, “If you don’t see it, then it wasn’t meant for you to see.” And when Mark was talking, it was the first time I’d considered the possibility that it applied to me about Cole, that I couldn’t see it because it wasn’t meant for me to see. Cole fits this generation and I’m not a member of “this generation” anymore. My whole world was caving in. This was real and true existential dread.

Then, as Mark was leaving, I asked if he was on Twitter so I could check in to see if he mentioned anything about the show. He said yes, and gave me his Twitter handle — it included a reference to money and also a reference to poop. I laughed, and remembered that Mark was a knucklehead. And I realized I wasn’t wrong about J. Cole after all.