‘The Walking Dead’: Mr. Grimes Goes (Close) to Washington, But How Long Will the Comfort Last? 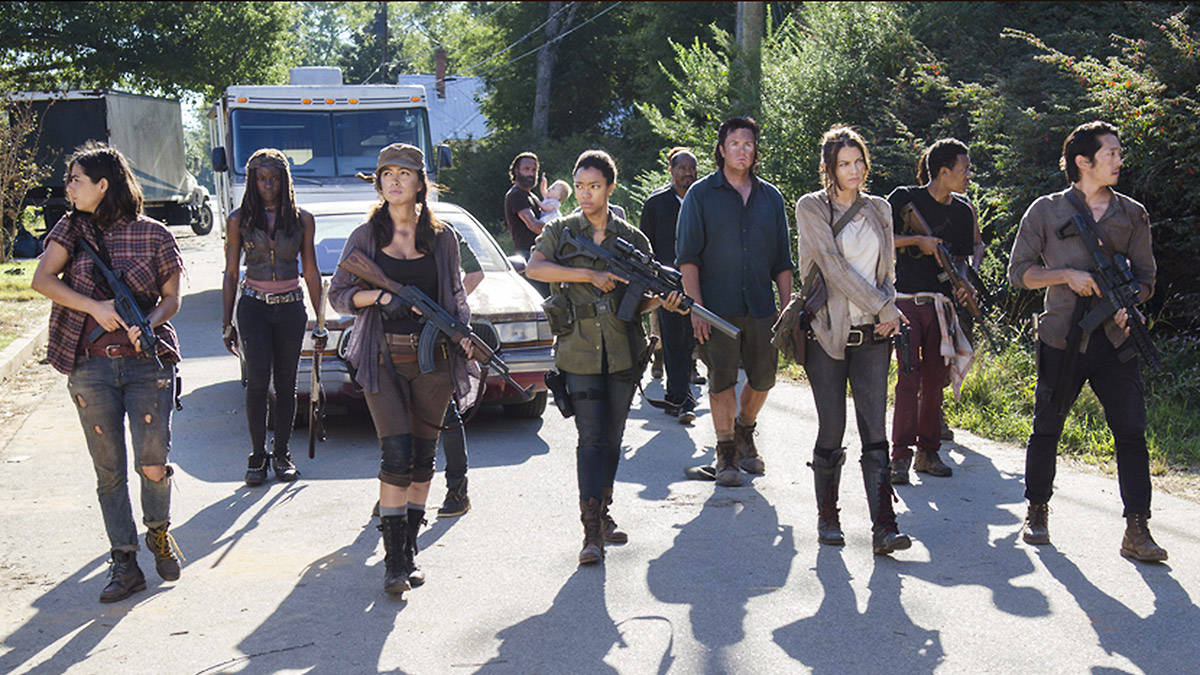 If The Walking Dead showrunner Scott Gimple were as stealthy as the curiously silent walkers who attack on tiptoe whenever the script demands a sacrifice, he would have struck while America was watching the Oscars, transfixed like Tyreese by a family photo. Morgan and Rick reuniting, a walker killing Carl, Carol and Daryl doing it — Gimple could’ve unleashed three seasons’ worth of fan service in a single episode, while millions of unsuspecting, DVR-ing Deadheads tapped their feet to Birdman’s beats. But what works for walker assassins doesn’t always suit AMC, which prefers its flagship show to lumber across the cultural landscape as conspicuously as possible, hoarding its explosive rounds for premieres and finales. Burning big plot points on Oscar night, in the 11th episode of a 16-part season, would’ve been bad business.

So instead of another unnecessary death, last night’s episode, “The Distance,” covered the calm after the storm that ended Episode 10. Of course, a calm week of Dead still includes mass vehicular zombicide and a flare to the face. But unlike the midseason premiere and its sequel, yesterday’s Dead also got the group closer to D.C. without any contrived visual quirks or “why would they do that?” moments, easily clearing the low bar of being the best episode since the show returned from break.

“The Distance” exhumed an old Walking Dead dilemma: whether to trust a stranger who comes bearing groceries. In Dead’s everyone-eat-everyone world, both walkers and humans know that babies (and Bob) taste best; the difference is that the walkers are more honest about their intentions. In the Grimes group’s experience, every offer of sanctuary has turned out to be a trap, and Rick expects the same from Aaron, the bottled-water-dispensing Justin Timberlake look-alike whose arrival interrupted a tender Sasha-Maggie music-box moment at the end of last week’s episode. Aaron looks even cleaner than the Hyundai that used to carry Rick & Co. between catastrophes; it doesn’t seem possible that someone so well groomed could be well intentioned and occupy the same laundry-deprived society as Abraham’s off-white tank top. Moreover, Aaron is singing the same siren song as the Governor and Gareth before him, promising a safe settlement with high walls where everyone is welcome.

Dead has fed us too many “suspicious stranger” story lines to give us the same progression again, so the show wisely switches things up, making Aaron’s motivations more ambiguous and the group less gullible. After listening to Aaron’s invitation, Rick RSVPs with a punch. “No matter what I say, you’re not going to trust me,” Aaron responds, ostensibly talking to Rick but also addressing the skeptics in the unseen audience. Aaron’s words don’t work, and neither do the pictures he offers as proof; these days, anyone can Photoshop a zombie barrier. Michonne, who’s in a much healthier mind-set than she was when she’d travel only with therapy pets, reminds Rick that there’s more to life than a Sophia-like indoor existence, and he grunts approval of a trip to find Aaron’s ride.

While the scouts are away, Aaron gets a room at Hotel Grimes, where the checkout time is whenever the proprietor sticks a knife in the base of your skull. His story holds up, and Michonne persuades Rick to sign off on a mass expedition to the still-undisclosed location of Aaron’s camp. Either paranoid or prudent, Rick insists on an alternate route, which endangers and temporarily splinters the group. After a few nighttime scenes that tested my TV’s black levels, everyone arrives at a rendezvous point, where Aaron reunites with his injured boyfriend Eric and the two team up for The Walking Dead’s first same-sex kiss.

In “The Distance,” the sunrise that greets Aaron’s arrival really does seem to mark a new day for The Walking Dead — the dawn before which last week’s depressing slog was darkest. Thanks to Aaron, who smuggles canned goods through walker-infested territory like the world’s last and best FreshDirect delivery man, the group’s menu gets an upgrade from earthworm and dead dog to artisanal applesauce and S’Getti Rings. Rosita and Abraham are inspired when they spot the Washington Monument, the historic site of Dana and Finn’s first kiss. Aaron’s RV isn’t the broken-down death wagon Dale’s was; drawing on Dale’s tutelage, Glenn finds a spare battery, and Noah, whose emaciated frame and lurching gait make him an undead ringer, gets good news about his leg in a room that resembles the one where Jim died. Best of all, Aaron’s community in Alexandria appears to be populated and secure, at least from outside the fence — another victory for LGBT-driven gentrification.

Of course, these hints of happiness are where the awareness that we’re watching a TV phenomenon detracts from our investment in the story. Rick might begin to believe Michonne when she says the fight is over, but we know too much to feel any suspense; even when it’s nihilistic, Dead’s ratings are too good for us to wonder whether Gimple will relent for long. Even if the shrieks of apparent delight wafting over the wall aren’t actually cries of fear (or recordings), Alexandria can’t possibly last long, and not just because it’s named after a city that’s been conquered and sacked so many times. As Carol says to Rick after finding Alexandria intact, “Even though you were wrong, you’re still right.” The calm after one storm is also the calm before another, and with four episodes left before the finale, there’s just enough time to make us care about new characters before killing them and shutting down their fledgling civilization like the D.C. Metro after dark. So based on what we know,1 what existential threats might lead to Alexandria’s almost-inevitable demise?

Walkers at the Gates: If there’s one thing we know about walkers, it’s that huge herds of them are efficient fence-smashers. With the undead population of downtown D.C. only a few miles away and the pack on the road riled up by Glenn’s nonevasive driving, it’s easy to envision another successful siege.

Aaron’s description of 15-foot steel slabs with cold rolled beams is as reassuring as a sales pitch about the Titanic’s watertight compartments. The last time a defender bragged about cold rolled steel keeping enemies out, Mag the Mighty breached the Night’s Watch’s outer defenses with nothing but his bare hands. Jon Snow knows nothing, but even he’s not ignorant enough to believe that a wall can keep walkers out indefinitely.

Charismatic Killers: Where there’s an oasis of safety in a zombie-ridden land, there’s a dangerous leader who either envies that safety or has already gone to sanity-destroying lengths to preserve it. In Alexandria’s case, I’m guessing it’s a Steinbrenner, which would explain why we’re about to say good-bye to Rick’s beard. Judging by his black clothes and the intimidating way he holds a cigarette, it’s probably Hank, which is bound to be bad news.

Tara Seeking Attention: Remember Tara? Barely, right? Since the midseason break, she’s been slouching in the background of important scenes, waiting for another burst of the blinding creativity that produced Team GREATM. So far, she’s fresh out of ideas. Which means that her next idea might be dangerous: If no one else will talk to her, maybe the walkers will. It wouldn’t be the first time she’s made friends by helping to destroy a well-fortified facility.

Sasha’s Thirst for Revenge: Last week, Sasha spoiled a perfectly good game of zombie-tipping because she just had to crush some skulls. Who’s to say she won’t spoil a perfectly safe settlement in order to exorcise some Tyreese-related anger?

Father Gabriel: Burning his clerical collar may have made him feel like a rebellious badass, but Gabe still has sub-Judith survival skills. If there’s a way to let a walker in, he’ll flop-sweat till he finds it.

Two weeks ago, The Walking Dead reminded us what happens to nice people in a postapocalyptic world: They suffer inexplicable attention lapses at inopportune times, and then hallucinate lecturing/crooning corpses until they mercifully bleed out and become them. Aaron and Eric seem like nice people, which means they might come to regret meeting Rick’s group. For now, though, their fate is still uncertain: From the other side of the fence, there are more wild cards in Alexandria than there are in Eugene’s game of seven-card stud.