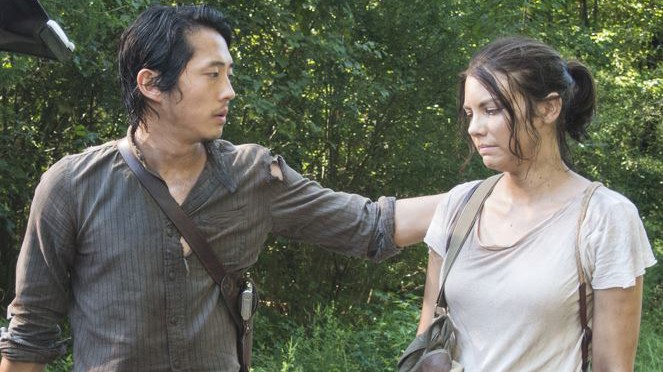 The apocalypse can really get a person down. Try as our not-so-merry band of survivors may to outrun the darkness, it just shambles along behind them in relentless, inescapable pursuit, waiting for its opportunity to sink its rotting teeth into them yet again and bite off another chunk of their collective soul. At least when they hole up in a church or prison or abandoned Gymboree, they can pretend for a week or five that they’re safe from the shuffling wave of mutilation being temporarily held at bay by a rickety fence, a padlocked gate, a hastily carved ring of sharpened stakes. But when they’re out on the road, trudging mirthlessly toward an inevitable disappointment in Washington, D.C., that fragile self-deception becomes impossible to maintain. It’s hot. There’s no food or water anywhere, no matter how plump their ostensibly starving baby looks. Carl won’t stop asking, “Are we there yet?” every hundred feet as he teeters along the double yellow line on the sweltering pavement like a high-tension wire, tempting Daryl to put a long-overdue crossbow bolt between the kid’s beady eyes.

On Sunday’s The Walking Dead, the darkness caught up with our heroes again, sped along by the recent losses of Beth and Tyreese; hungry and dehydrated, nobody had the strength to look away. And things got bleak quickly. Like, staring-into-the-void-as-it-stares-back-at-you bleak, Nietzsche off his Zoloft and riding shotgun with Rust Cohle bleak. Here is a rundown of the grimmest-ass moments in last night’s punishing existential misery-parade. Maybe turn on a light before moving on. It’s gonna get dark in here. 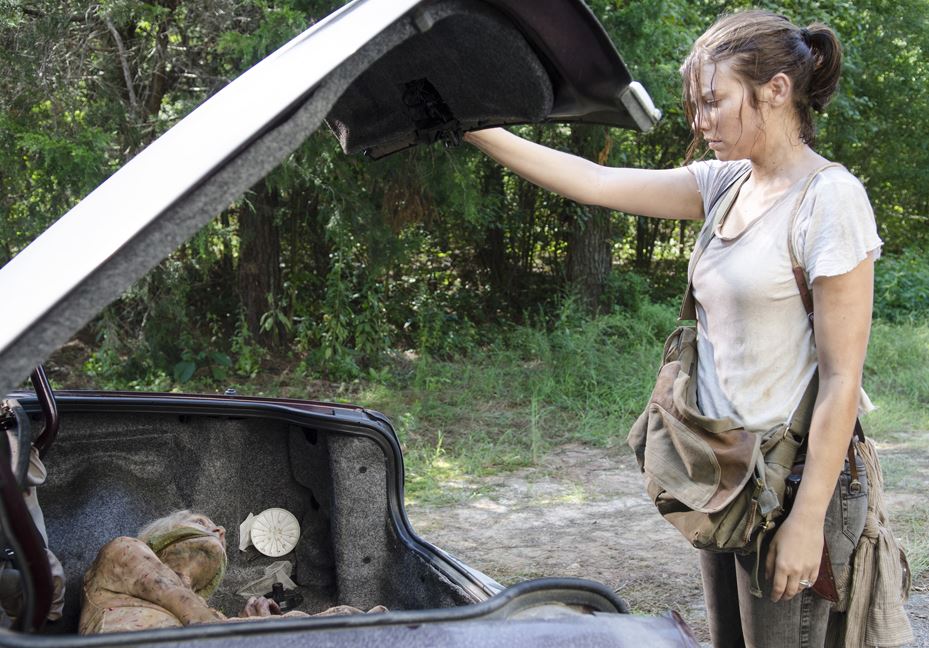 Did it seem like Maggie wasn’t as sad as she should have been about the botched hostage-exchange thing that killed Beth? It did, right? Well, this time they opened with Maggie finally crying it out beneath a tree, pausing from her slow-acting grief long enough to impassively jam a knife into an approaching walker’s face, avoiding a second consecutive week of The Walking Dead’s trademark Uneccsssary and Wholly Avoidable Death. Not long after, Maggie discovers a gagged-and-bound zombie left for undead in the trunk of a car. She quickly slams the trunk shut, before realizing what she really needs at that moment is not to ignore the snarling biter and move on, but to release that poor soul from its prison. Whoopsie, the keys are jammed in the lock and she can’t open it again on her own. Can’t a grieving girl work out her complicated emotions in stabbing-a-zombie-in-the-head form without having to call her husband over to finish the job?

A Bunch of Dead Frogs

There were a bunch of dead frogs in a dessicated creek bed in the woods, not too far off the road. Let’s not pause too long to unpack the symbolism. However, if Daryl were hungry enough to gobble a worm for protein, shouldn’t Sasha have been bagging up the frogs for a French-inspired meal instead of trying to bury them in the mud with her boot? That’s just wasteful.

There are two ways to think about a pack of snarling dogs that suddenly appear to menace a vulnerable and ravenous group of humans in their most vulnerable moment: (1) Watch out, scary and threatening wild dogs! and (2) Dinner!

Father Gabriel, by far the softest of the lot, did not seem particularly happy to be snacking on a spit-roasted collie. All that praying so that they might once again stumble upon a cupboard full of canned goods went for naught. It’s enough to make a despairing man of the cloth whip off his collar and toss it into the fire in resignation to his fate. Whatever, Lord. Guess I gotta eat Lassie now. Thanks for nothing, bro. 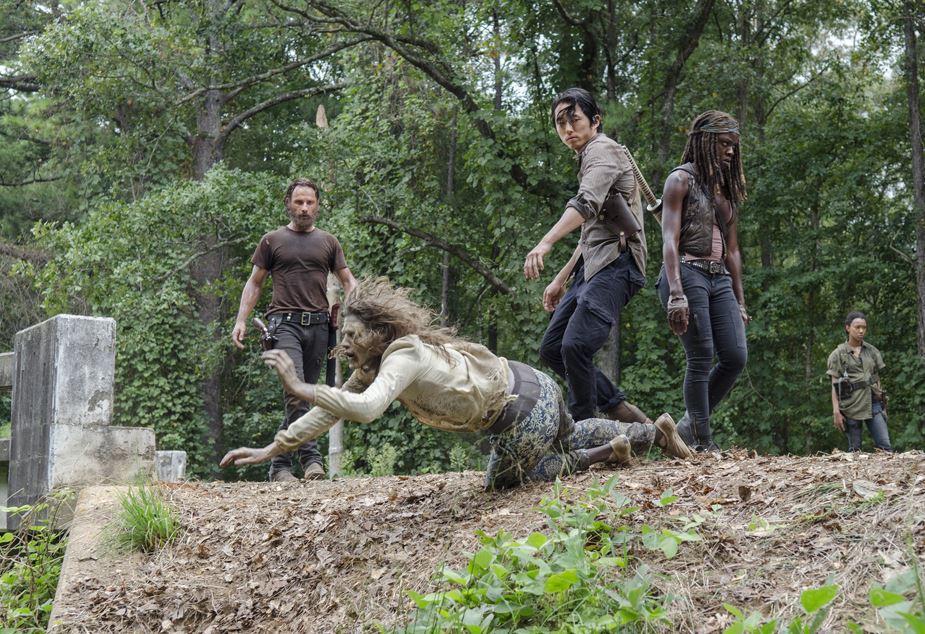 This is how bad things have gotten: Rather than expend precious ammo or risk an injury by engaging an approaching horde with their close-range weapons, the exhausted group opts to stand at the edge of a small bridge and push zombies into a ditch. No satisfying katana beheadings, no classic Bowie-knife-through-the-temple action, not even a cranium-shattering swing of a tire iron. This might have marked the lowest point in the gang’s cursed journey, had an emotionally annihilated Sasha not lost her damn mind and started blowing heads off with an assault rifle, involuntarily squeezing the last drops of fight out of our beaten-down gang. Shoving. Really.

We take it back: This might have marked the lowest part in the gang’s cursed journey. Now the last remnants of humanity scratching out the most meager of existences on the unforgiving surface of a ruined planet can’t even allow themselves the brain-dulling pleasures of a bottle of foraged whiskey? The dehydration risks of alcohol seemed to far outweigh everybody’s desperate need to take their tragedy-addled minds off their impossible predicament, especially when it comes with the bonus of being too shitfaced to warn a hooch-blunted Carl about the walker creeping up behind him. 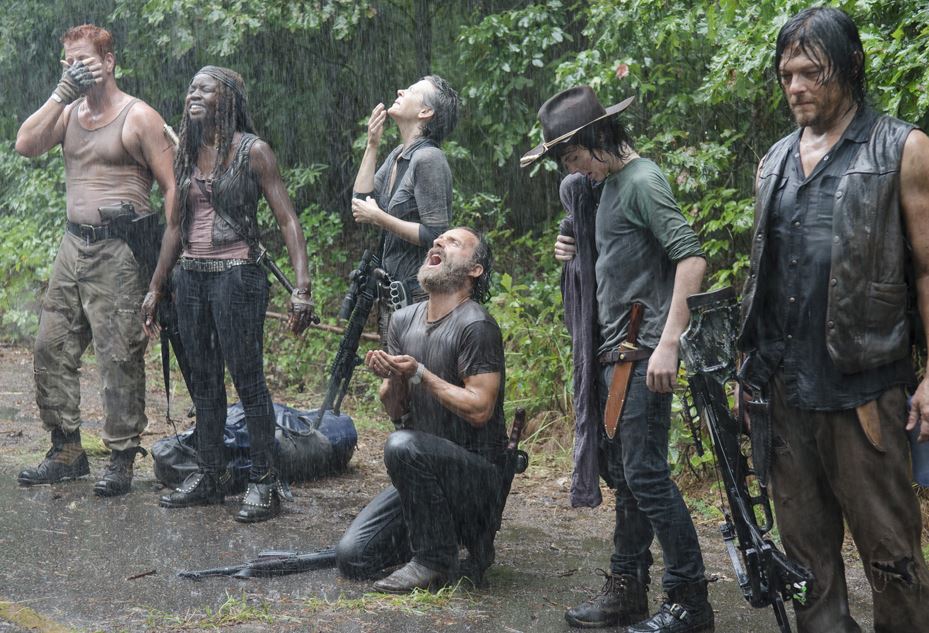 The emergency delivery of fresh protein in the form of some long-dead families’ lost pets? A torrential downpour that not only saved everybody from their imminent collapse from thirst, but removed the necessity of taking potentially poisonous sips from a bottled water supply left in the middle of the road by “a friend”? A cascade of storm-felled trees that crushed an invading zombie phalanx mere moments before they were to breach a buckling barn door and overwhelm the weakened people inside?

Whatever god watches over this mangy flock of The Walking Dead has an amazing sense of humor. All that was missing was for Father Gabriel’s singed collar to come fluttering down from the heavens as the despairing cleric stepped out from the barn to observe all the freshly skewered walker-kabobs He offered as a celestially flipped bird to the priest.

“We do what we need to do and then we get to live. No matter what we find in D.C., I know we’ll be OK. Because this is how we survive. We tell ourselves that we are the walking dead.”

A little on the nose? Sure. But what Rick’s anecdote about how to deaden oneself to navigate the unspeakable and escalating horrors that each new day brings lacks in subtlety it makes up for in the implicit promise that he will eventually watch his terrible son be eaten before his world-weary, unblinking eyes, then just keep marching onward. Silver linings, people. Silver linings.