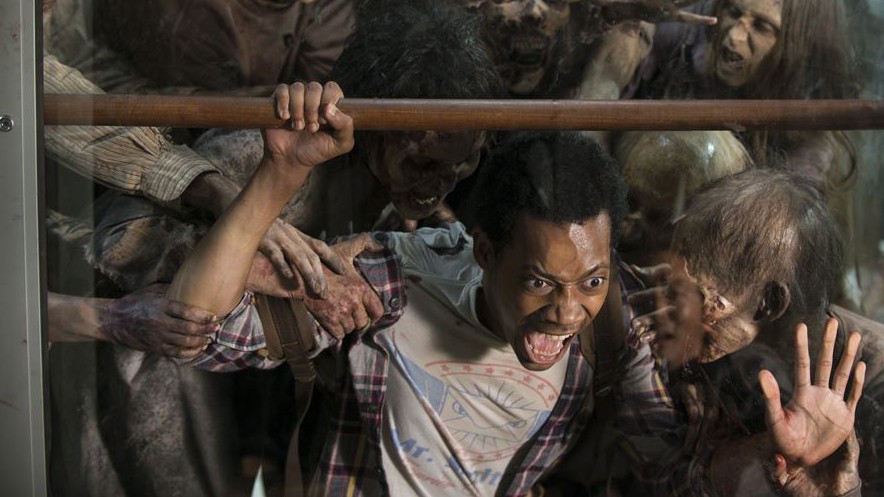 It was a scenario unlike any other in Walking Dead history. A small patrol on a supply mission, dispatched beyond the perimeter of a secure compound. A totally unforeseeable encounter with a horde of flesh-starved zombies, idling inside the poorly lit place our brave group had hoped to find their precarious treasure. Several close, breath-quickening calls with the walkers in tight spaces. And then, finally, our heroes succumbing to the inexorable superiority of the undead’s numbers. A comrade falls. Flesh is torn. Violently exposed entrails are treated like a never-ending spaghetti bowl at the Alexandria Olive Garden on postapocalyptic Groupon night.

No, we’ve never seen such horrors unfold. Except literally every time our battled-hardened but thick-headed band of survivors decides to disregard their considerable experience with undermanned foraging trips and charge headlong into certain doom anyway, because there’s a Really Important Thing they have to get with as few people as possible. And so we have our latest Unnecessary and Wholly Preventable Death to mourn, our heads to shake in disappointment, our second guesses to offer in a generous spirit of “come the fuck on with this now.” If it seems like we learned nothing from Tyreese’s pointless demise, it’s because we haven’t. Biters gonna bite, dumb-asses gonna get bitten.

OK, perhaps that’s a little unfair to Noah, sweet, sweet, Noah, whose last few weeks on this miserable planet were essentially swapped for Beth’s in that hospital corridor as part of the world’s worst hostage exchange. We can’t blame him for winding up trapped in an enclosed space with Glenn and Squirrelly New Guy Who’s About to Get Someone Killed and confronting us all with the graphic realization of our collective fears of being imprisoned in a revolving door. Noah’s torn-off face was all of our torn-off faces in that split second when we confront our mortality every time we enter a shopping mall or hotel through one of those whooshing death traps, knowing there’s at best a 50-50 chance we will be ejected to the safety of the other side. Having vividly experienced the resolution of that primal horror through poor Glenn’s disbelieving eyes, we can confidently say, “No, thank you, I’ll take the regular door here. You will not feast on my heart today, overeager bellhop,” the next time we’re offered the choice of egress. So maybe Noah’s little mishap had some value to us after all, if not his newly suburbanized pals back at home. 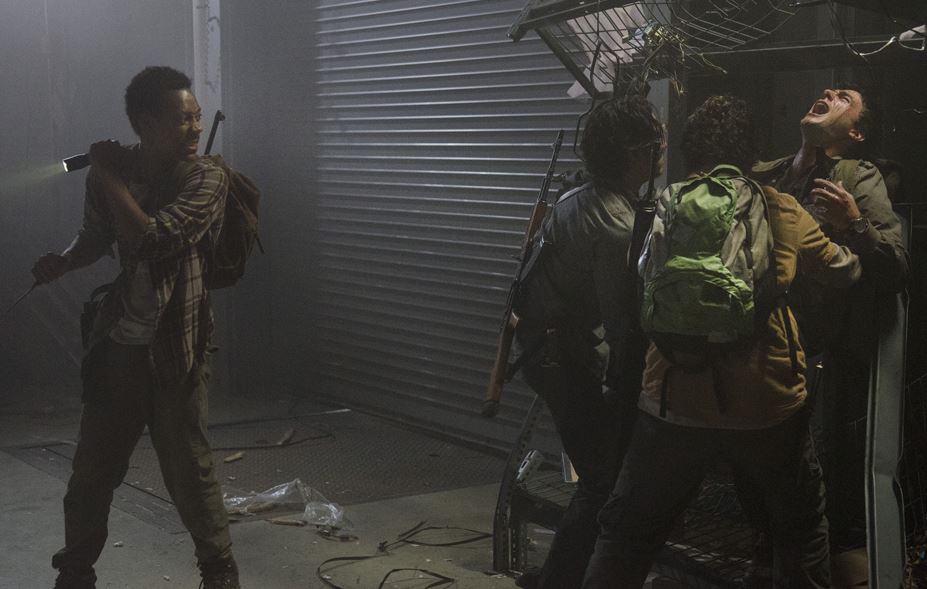 As for Aiden, well, we appreciate the throw-in. It was a nice touch to have him impaled inside the warehouse, gurgling a confession through his own blood about his people’s inadequacy in the bravery department, then ultimately sacrificed in the name of “Oh, maybe THIS is the one who dies like an idiot this week” misdirection. Aiden, we barely knew you, nor did we particularly care to, because introducing yourself as a toss-up between “hard-ass” and “douche bag” didn’t exactly get things off on the right foot. And now you are dead. Tough break, that two-episode contract. At least your more handsome brother is still around to carry on the family name. We’re sure your ugly departure won’t present any immediate destabilizing complications in our fledgling New People–Old People relations.

Right. About that. OK, this much is crystal clear now: Alexandria is the softest place in the universe, a Charmin factory with a quilted two-ply roof as a shit-hurricane quickly gathers force offshore. We saw it demonstrated twice last night, first as Tobin1 handed over his construction foremanship to Abraham, relieved to surrender the burden of leadership to the first flat-topped alpha male to humiliate him, and then as Nicholas (the aforementioned Squirrelly New Guy) set a new land-speed record for treachery by abandoning his gut-kabobbed buddy, getting Noah slaughtered, and then attempting to carjack the getaway van in the space of about five pants-pooping minutes. And he survived, taking inspiration from Alexandria’s flag, the silhouette of a chicken above the motto “Don’t Be a Hero,” a sensible-enough standard to fly outside 15-foot-tall steel barricades. You almost can’t blame the guy for simply following the community charter. Hey, it’s not like there’s anything in there about revolving-door ethics that might override the justified cowardice clause.

Meanwhile, inside Alexandria’s walls, something else is nearly as clear as the newly uncovered institutional gutlessness: Rick and the gang are about two episodes — coincidentally, the amount of time remaining in the season! — from taking this place over. Bored by the absence of any real challenges, Carol is spending her days running a chocolate-smuggling ring and strong-arming the next generation of easily intimidated bed-wetters. Daryl is cruising around on his Frankencycle alongside Aaron, looking for recruits to help keep the rapidly diminishing population up. Michonne is standing in front of her mantle, admiring how cool her katana looks as a home-decor show piece. Once Rick is clear of the Case of the Broken Owl Sculpture, he can prepare his summary-judgment death penalty for Drunken Dr. Pete, who, of course, has turned out to be abusive toward the family our new constable will soon steal from him. Carl is sitting quietly in the woods somewhere, his dead, beady eyes locked on the rotting sparrow he’s poking with a sharp stick, wondering when the writers will finally deliver him the long-delayed annihilation he so obviously craves. It’s a difficult transition for our heroes, trading the simmering terror of the road for the comfort of well-maintained McMansions, and one can hardly blame them for planning for the day when it will become necessary to seize control of everything. 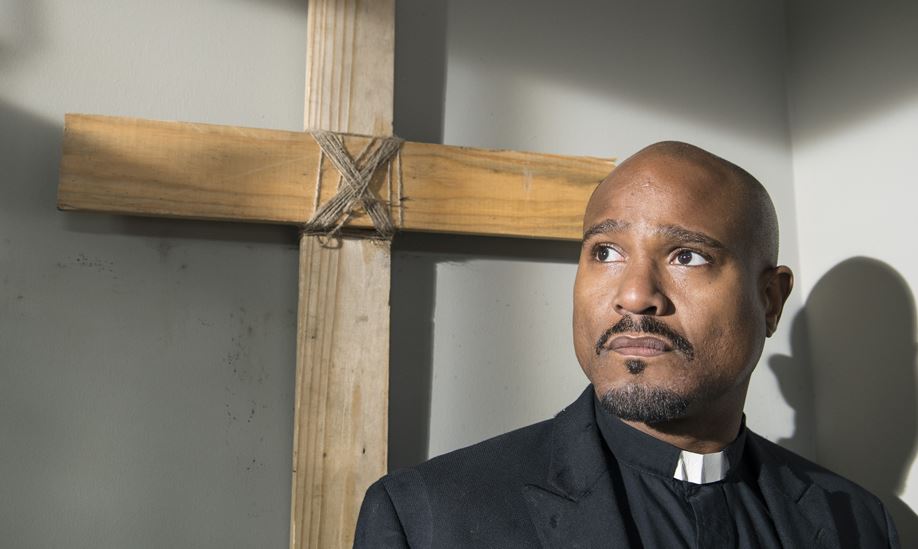 Good news on that front, though! Father Gabriel, in between theatrical loss-of-faith displays like setting his collar aflame and tearing pages from the Good Book,2 has decided to inform Deanna that his traveling companions are the secret minions of Satan, traipsing around the community in angel-of-light disguises, ready to destroy everything they’ve worked so hard to build. They have done terrible, terrible things Out There Beyond the Walls! They do not deserve this Paradise! Those pages were missing from the Bible when he got there! Deanna does the only thing she can do: take it all under advisement. And Maggie, creeping on some nearby basement stairs, does the only thing she can do: eavesdrop on the whole conversation. Oh, Gabe, buddy. Rookie sellout mistake. Always check the nearby basement stairs before you attempt to expose the false apostles of righteousness!

If there’s an upside to a betrayal as forehead-slappingly inevitable as the near-weekly supply-mission casualties, it’s this: Father Chickenshit is toast. Put all your money on that one. Maybe as soon as next week, Carl will be poking the husk of Gabriel’s half-devoured corpse — they’ll open the gates and let un-nature take its course — with that sharp stick, wondering if maybe he should have given the big “watch out for the fake angels of light” speech first to finally earn his booking on the big Talking Dead couch in the sky. He’s getting pretty bored of poking stuff with sticks. He never should have agreed to take that job when they got to Alexandria.