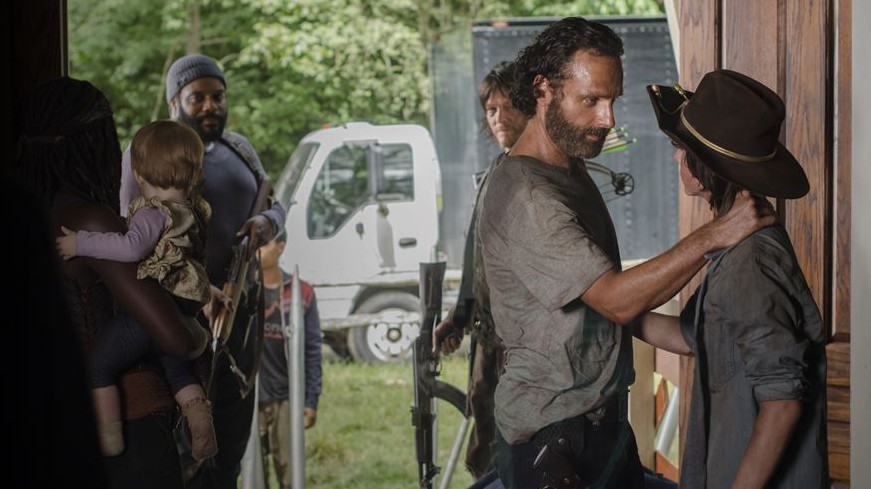 Reunited, and it feels so good. After several weeks of separately tracking the whereabouts of our scattered heroes — idling at a church littered with the corpses of overeager man-eaters, paying off astronomical medical bills at Grady Memorial, stranded next to a fire truck and mourning the loss of a giddy dream of salvation — on Sunday night The Walking Dead attempted to pull those narrative threads together as the show hurtles toward next week’s half-season finale. So there was the crew at Father Gabriel’s lonely parish, reunited with Daryl, plotting the extraction of Beth and Carol, and fortifying the sanctuary’s defenses. There was a bereft Abraham, kneeling in the middle of the road, processing Eugene’s lies and his brutal, mullet-wrecking response to them, while the rest of Team GREATM1 foraged for sustenance. There was Beth, trying to keep Carol alive at the hospital by any means possible. It was gratifying to have the gang back together in a single episode. It was like sitting down to a Thanksgiving meal with your far-flung family gathered around the same table, trying to drown out the sound of Aunt Martha clawing at the dining-room window — she insisted on going out to retrieve some wood for the fireplace by herself, and you know how that turns out! — with your warm holiday laughter.

But let’s not reminisce too long about how nice it was to have everybody back. Let’s reflect on the important parts of “Crossed,” last night’s episode. Let’s remember that this plague-riddled world is a dangerous place, and that we have to heed the lessons they’re trying to teach us if we hope to make it to next week. The Walking Dead is not all hugs and smiles and delicious turkey dinners. It’s a practical blueprint for survival.

In an Emergency, Virtually Everything You Could Ever Need Is Right at Hand

Some might see fish splashing around in a creek and think, Even if those fish are not somehow poisoned with fatal levels of zombie mercury, there is no way to catch them. We don’t have a rod or reel, nor do we have any hooks. And the only person in our group we might reasonably expect to have hillbilly-handfishing experience seems to have lost his mind after nearly beating humanity’s discredited last hope to death. But our survivors calmly take in their surroundings and find a solution: Those hissing, incapacitated walkers nearby might seem like a low-level threat, but their clothes could make for a handy improvised fishing net. Tear out the lining and voilà, they’re scooping a delicious seafood dinner out of a filthy creek. Man cannot live on peaches and roasted squirrel alone. (Well, he can, but mixing up the diet a little keeps the temptation to go cannibal at bay.)

Similarly, if one were to find oneself pinned beneath an angry adversary after a simple hostage-taking mission goes deliriously FUBAR, beset on all sides by the gnashing teeth of walkers partially melted into the hot pavement like fleshy ice cream cones dropped by clumsy children, one might be tempted to just lie back and accept one’s miserable fate. But again, salvation is at hand for the resourceful: A can-do guy like Daryl looks the biting zombie right in its ruined face, calmly jams his fingers into its eye sockets, and separates skull from disintegrating body, using this bowling bowl of last resort as an effective cudgel. If the blunt-force trauma doesn’t fell the assailant, the disgust at being pummeled with a rotting head almost certainly will.

Escape Is Never Impossible With a Little Ingenuity

Even a man of the cloth like Father Gabriel, who’d foresworn all violence in service to his Maker, may eventually be asked to take up a blade in a postapocalyptic crisis situation, recoil as he may from the thought of ever using it for its intended purpose. He’s a shepherd, not a butcher, even when his once-gentle lambs have come down with the feral mange that’s decimated the flock. So when life hands him a machete, he makes machete-ade: That sharp edge can be used to dispatch the undead to whatever eternal resting place awaits them, but it’s also handy for the less dramatic task of, say, prying up floorboards to clear a secret escape route. Whereas once he felt a captive member of a new congregation, his ingenuity with the tools at hand freed him to seek out a fresh start in another parish, hopefully one that is not so quick to abandon the tenets of its faith — if he doesn’t die of tetanus on the way there. Just as important as digging the tunnel to freedom is making sure your work space is clear of rusty debris. It’s a basic but crucial point, and one we all need to remember before we go hopping off into the woods on an infected foot.

But should you not have such an obviously handy physical tool available to you, other kinds can be just as useful. Consider the example set by Sergeant Lamson. Zip-tied by his (relatively friendly-seeming, but whatever) captors, he had to use the best options available to him: mind games and deception. Having established himself as a reasonable sort interested only in the nonviolent resolution of his predicament — even if that meant betraying his superior at the hospital — his story about wanting to help his fallen, walkerized comrade find peace became plausible, especially to a vulnerable mark dealing with her own emotional issues. A well-timed lie can be as effective a weapon as a machine gun, especially when the automatic rifle is being held by a gullible mark (more on her in a minute) who can be tricked into letting her guard down by a couple of crocodile tears and a sad story. Boohoo, my buddy is a pile of boiling guts, would you mind turning around to look at him for a minute? I promise I’ll just sit here in quiet gratitude and not smash your head into the window, cop’s honor. Maybe it’s not the most elegant subterfuge, but you take the shot when it’s in your sights.

Grief Is Weakness, So Get Over It and Move On

We have sympathy for Sasha. We really do. It couldn’t have been easy to watch Bob succumb to the inexorable advance of his zombie bite, especially after somehow surviving a cannibal cookout where his leg was the main course. (And by all accounts, it was delicious.) Her grief was real. She may regret not putting Bob down herself for the rest of her days on this accursed Earth, but no one really expected her to. On the other hand, maybe it would have given her the closure she needed to put her grief behind her and not so easily fall victim to the first seemingly sympathetic person nursing a loss of his own. Tyreese told her: Get over it. She didn’t listen.

And Abe. Poor Abe. Poor, dumb, strong-as-a-flat-topped-ox Abe. He thought he could ignore his pain by replacing it with a desperate mission to save all of mankind, thought he could finally be the hero his family needed instead of the unhinged berserker who bludgeoned fellow supermarket sweepers with two fistfuls of canned peas, not a Jolly Ginger Giant with murder in his heart.

Instead, Abe was the lead bird on a wild goose chase engineered by a relative-genius charlatan with amazing head plumage. How he dealt with the deception, and with his own lingering grief, was predictable: Abe smash liar. Abe realize all is lost. Abe fall to knees and contemplate crippling futility of existence. But after enough of that unproductive catatonia, this time the message came from Maggie, who’d suffered profoundly herself, and knew the only way forward: Get over it or I will shoot you in the head.

And then she left him a bottle of water. Because even when you’re staring off down the endless, sun-bleached road, trying to decide whether to wait there for a horde of ravenous zombies to deliver bittersweet oblivion, or to pull yourself together and move on to the next, inevitably soon-to-be-overrun location, staying hydrated is really important. And that might be the most important survival lesson of all.