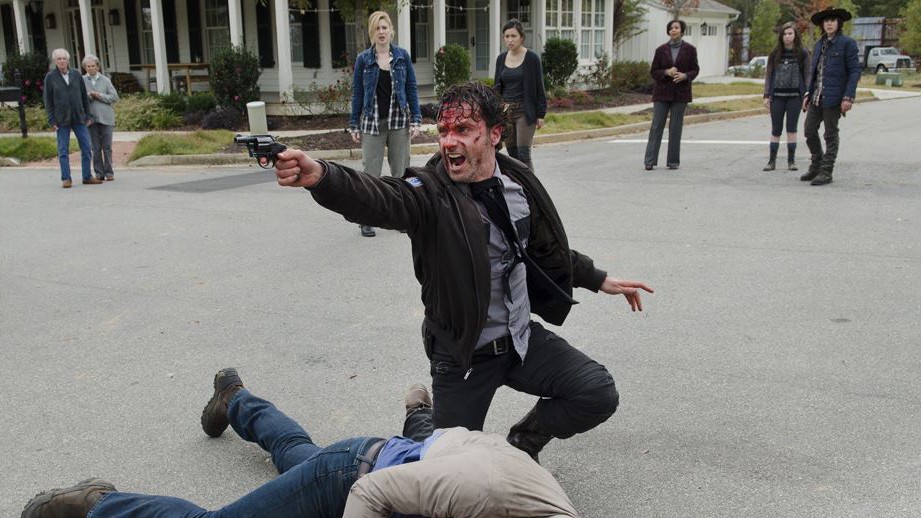 We knew this was going to happen. The stage was set for inevitable confrontation: A wild-eyed former sheriff, a man of the law irretrievably damaged by doing whatever was necessary to survive in a world populated exclusively by beings — undead and otherwise — with no other purpose but to consume his loved ones, suddenly trying to integrate himself into a community full of wishy-washy cowards who have no idea how to keep themselves safe from the terrors gathering irresistible force outside their 15-foot walls. A small-town politician, pie-eyed with visions of utopia, making shortsighted compromises to keep a fragile peace intact, one now strained by the death of a son — a self-admitted douchebag, but he was her self-admitted douchebag — sacrificed to her pretty dumb way of doing things. An alcoholic surgeon who physically abuses the wife and child our new constable hopes to annex into his own depleted family, liquored up and ready for a fight, walking in on said wife and new-guy lawman having a heart-to-heart about where her soon-to-be ex-husband should set up his bachelor pad.

Yes, we knew this was going to happen: Our three potential combatants, realizing that the only way to resolve their disagreements is through civilized discourse, would finally sit down to talk out their problems over heaping plates of a delicious condolence casserole. Yum. Nothing tastes quite as good as some home-cooked conflict resolution. Wine glasses clinked, forks skidded around licked-clean plates, and everybody went home satisfied that a fair settlement had been reached. The good doctor would seek immediate treatment for addiction and anger-management issues, the constable would put any plans to summarily execute him on indefinite hold, and the town leader would get to live another day believing the feral strangers she’d invited to live in her idyllic suburb weren’t about to stage a violent coup.

It’s nice to dream, isn’t it? You can see how Deanna could lose an entire afternoon in the gazebo, staring up at the pristine blue sky blanketing her fledgling paradise, imagining that this earlier, troubling exchange between Rick and her never took place:

Deanna: What if we just let him sleep on my couch for a few days and get his head straight?

Deanna: Please don’t do that.

Rick: People get killed now, Deanna. By me. It’s how things have to work.

Deanna: See that cloud up there? Looks a lot like you and Pete having a nice hug instead.

Rick: I see me killing Pete.

Rick: OK, off to kill Pete.

Deanna: See you for dinner, we’re having casserole. 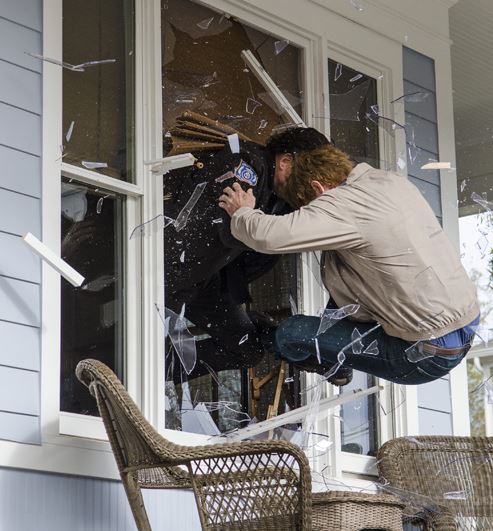 Rick and Pete crashing through a window and tumbling into the street, where a crowd of rubbernecking lookie-loos, afraid they might catch a fist to the face like Jessie and Carl if they try to interrupt the likely fatal melee, munch their ringside popcorn. A bloodied and rage-berserk Rick, pulling a gun ON THEIR ENTIRE RIDICULOUS SOCIETY, giving the unhinged speech of his life.

“You still don’t get it. We know what needs to be done and we do it. We’re the ones who live. You just sit and plan and hesitate and look through your Crate and Barrel catalogues, picking out the new — and, quite frankly, overpriced — leather sofas you’re going to put in your impeccably decorated living rooms as soon as we organize a supply mission to the regional warehouse that will claim three day-player lives. Things don’t get better because you want them to! They get better because I am willing to kill this guy right here so I can make love to his wife and raise his kid to be a homicidal monster, just like mine! Now someone please knock me out before I say anything else I’m going to regret about your incredibly boring taste in home furnishings!”

Fortunately for everybody, deputy constable Michonne — herself hot for a little head-cracking action after helping a PTSD-riddled Sasha sport-massacre a herd of walkers outside the walls — obliged Rick’s request to be silenced, cold-cocking him mid-filibuster and leaving the Alexandrians’ pedestrian choices in window treatments unremarked-upon. And so with the season finale looming, the endgame has been established. Deanna, her worst snitching-priest-supplied fears about the volatility of her guests confirmed, will have to make impossible decisions: about whether to exile them all or to internalize Rick’s tough-but-fair critique of her too-passive leadership style and let them continue to protect her community from the dangers looming outside the compound, such as the still-unseen, presumably less-than-friendly folks tying naked, disemboweled ladies to trees and carving mysterious Ws into zombie foreheads. About how much to compromise her laughably optimistic values to reflect the harsh realities of their circumstances. About how many more citizens she can afford to lose on the big Crate and Barrel run, because everyone’s pretty tired of last season’s couches, what are they supposed to do, not refresh the décor for fall, like animals?

Indeed, Deanna’s in an impossible position. Maybe she should have looked the other way, spending a relaxing evening enjoying some reheated casserole with husband Reg as their late son’s Nine Inch Nails–heavy mix CD plays softly in the background, as Rick took care of the dirty, but probably necessary, business of putting down Dr. Pete for her. But here she is, one week from that finale, and the casserole’s still sitting untouched on her doorstep. When Carol finds out her gift went unappreciated, Rick’s going to be the least of her problems.

And Before We Go, a Quick Note About Carl

It has been the ongoing practice of these Walking Dead postmortems to speculate about the fate of Carl Grimes, often in a way that suggests that we are hoping — breathlessly, and perhaps uncharitably — for him to be killed off. Well, sure, we do want that, more than we want pretty much anything else in this life, because finally seeing that stupid lid of his topping a makeshift headstone as a group of shrugging mourners eulogize him with sentiments like, “It’s weird, I don’t miss him at all,” and “It’s crazy that he lasted this long. Like, so, so crazy!” is the payoff we deserve after five seasons of enduring the pudding-slurping misadventures of this dead-eyed tragedy-muppet. So, will the finale, one Sunday night hence, deliver us that long-awaited relief when the show makes its traditional end-of-season sacrifice to the bloodthirsty gods of call-sheet attrition?

We have our answer: We can all go take a flying fuck at a rolling sheriff’s hat. 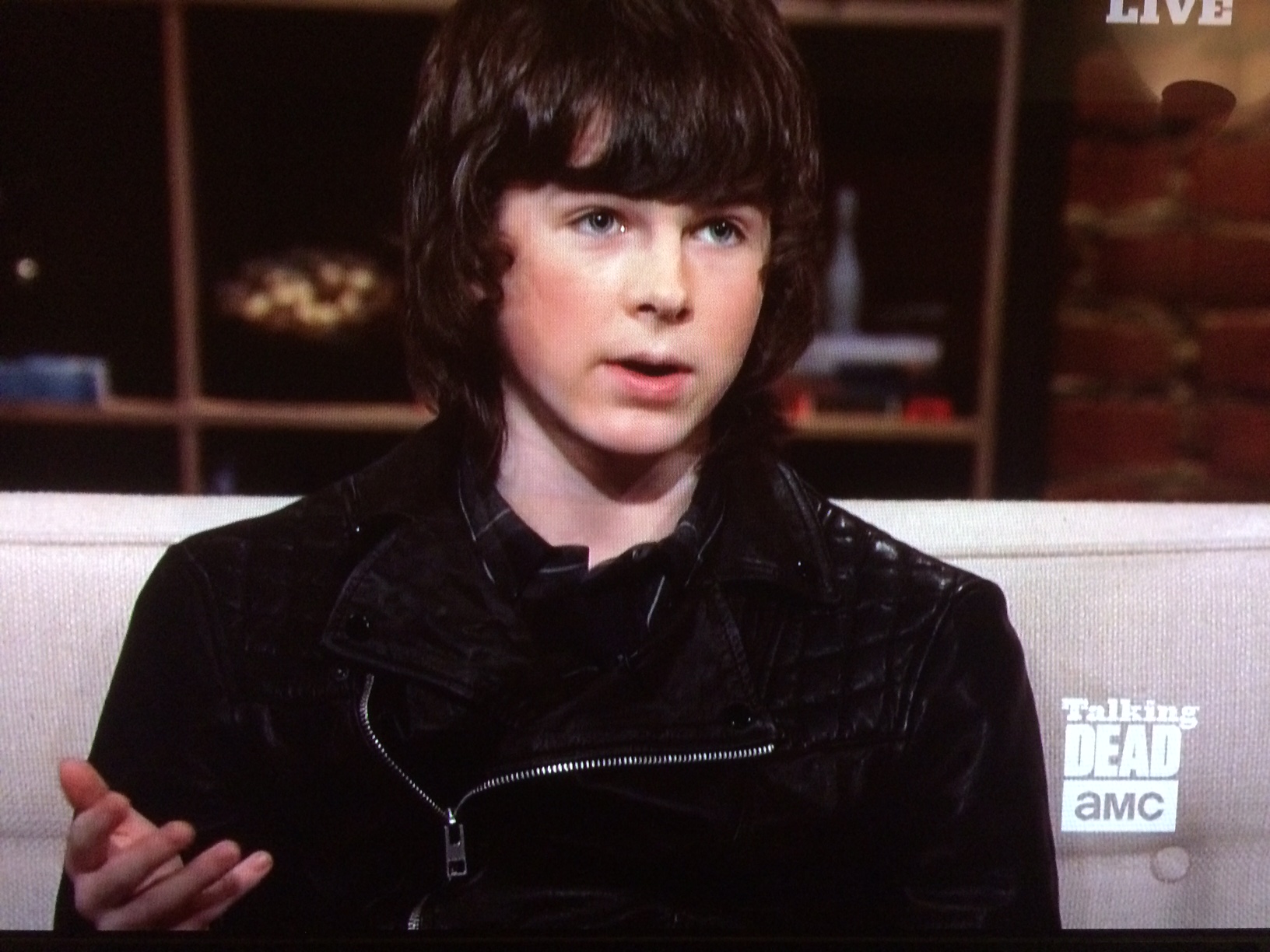 That’s Carl making his first-ever appearance on last night’s Talking Dead. Dressed like he has already spent the entirety of next season’s salary at a charity auction of “Thriller” memorabilia. That is not the wardrobe choice of someone about to lose his job. That is the sartorial equivalent of a man-child confident in his continuing employment raising two middle fingers to the audience at home and screaming Come at me, bros, I held hands with a girl inside an old tree tonight, I’m immortal! Nobody does the couch in back-to-back weeks. He’s not going anywhere.

TO BE BURIED IN NEXT SEASON.

It’s all we’ve got in this ruined world.