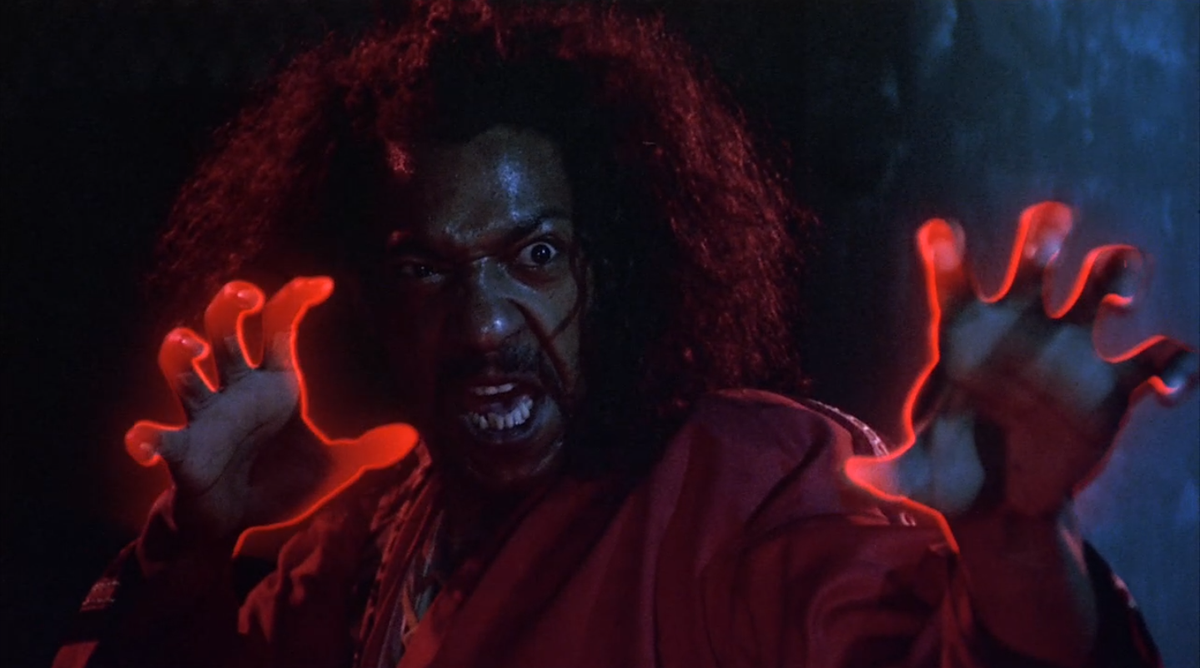 The Last Dragon turned 30 years old Sunday. I’d assumed that writing about it would be easy. And it was, but it also wasn’t.

It was easy because I’ve seen it somewhere between 80 and 100 times. It’s one of my favorite movies. I started watching it as a kid and I’ve just kept on watching it over and over again. I own three copies on DVD because Walmart sells it in that big bin of movies and it’s only $5 so, I mean, how can I not? The part when Bruce Leroy chops that arrow in half as it flies through the air in the opening montage. The part when Sho’nuff introduces himself to Bruce Leroy in the movie theater. The part when Bruce Leroy gets tricked into walking into a 30-on-1 fight and then his kung fu students save him. The part when he glows. THE PART WHEN HE FUCKING GLOWS.

Let me explain the plot in case you’ve never seen The Last Dragon, or haven’t watched it in the last 48 hours: Bruce Leroy is a young black martial artist. He is being trained by an old Chinese martial artist. All Bruce Leroy wants is to become a master martial artist — if he attains the second-highest level of master in The Last Dragon, he can make his hands glow from the energy he’s harnessed. This, as you can imagine, is an especially devastating skill. More deadly than that, though: If he reaches the highest level, he can make his whole body glow, and this raises some weird questions, like, “Since you have control of The Glow, can you use it anywhere, like, say, while you have sex or while you eat spaghetti, or can you summon it only when you’re fighting?” and “Does your whole body glow? Like, ALL of your body? Even your you-know-what?” But don’t think about those questions, because they’re never addressed in the movie, no matter how many times you watch it.

There are two lead villains in the movie. One is supposed to be the brains. His name is Eddie Arkadian (he owns arcades), though it isn’t until the final third of the film when he turns super-evil. (In the beginning, the most dastardly thing he does is threaten people with a weird super-piranha monster, but by the end he’s taken up kidnapping and blackmail and shooting people in the face at close range.) Mostly, though, he just seems motivated by love. His girlfriend is a would-be pop star, and Arkadian tries to force her way into fame by kidnapping the host of a TV show that plays videos. It’s pretty understandable, really.

The other bad guy is Sho’nuff, and he’s legit the star of everything. He’s crass, he’s mean, he’s intimidating, he wears shoulder pads with no shirt, his hair looks like murder-death-kill. Like Bruce Leroy, Sho’nuff is also hoping to become a kung fu master, though where Bruce Leroy applies self-reflection and enlightenment with an unseen master named Sum Dum Goy, Sho’nuff plans to bully his way to the top, defeating all other would-be masters and siphoning away their energy. He has a total hard-on for Bruce Leroy and spends much of the movie trying to goad him into a fight by destroying his family’s pizza joint, attacking and humiliating him in front of his students in his dojo, etc. He’s a masterful bully — think of Johnny from The Karate Kid mixed with Chong Li from Bloodsport.

As Sho’nuff dunks Bruce Leroy, he has flashbacks to scenes from the movie, and after enough of them he pieces together what he should’ve known all along and what we all should’ve known all along: BRUCE LEROY IS THE MASTER OF MASTERS. Sho’nuff pulls Bruce Leroy up out of the water, asks him one last time who the master is, and Bruce Leroy, a fully realized peace in his eyes and stillness in his heart, says, “… I am.” Sho’nuff explodes, attempts to deliver a death blow, but Bruce Leroy catches his fist. Again he says, “I am,” and this time he makes HIS WHOLE BODY GLOW. It’s incredible.

Sho’nuff, there’s nothing he can do. He waits to die. Bruce Leroy glow-fights him a bit, and it’s so much fun, and then he flying-kicks the everything out of Sho’nuff. Sho’nuff is defeated. Arkadian the snake, watching the whole thing, pulls a gun, says some clever things about kung fu vs. modern artillery, and then shoots Bruce Leroy right in the face. I mean, it hits him square in the face. The violence of the hit spins Bruce Leroy all the way around, flinging his body to the ground. He’s down on the floor lifeless. Arkadian laughs his terrible laugh and that’s that: The movie’s over. Except guess what. IT’S SO FUCKING NOT.

Arkadian rolls Bruce Leroy’s body over with his foot. Bruce Leroy moves his head a bit, opens his eyes, then opens his mouth. And we see it. HE CAUGHT THE BULLET IN HIS TEETH, BRO. Bruce Leroy gets up, secures Arkadian for the police, and for real, that’s that, that’s the movie.

I love it. I love that movie so much. So it was easy to write about.

The hard part, though — or it’s probably more accurate to call it the transcendent part or the amazing part — is that as silly a movie as it is, The Last Dragon handles the issue of race with a deftness that not many movies have ever pulled off.

Bruce Leroy — a lithe, measured black man dressed in Chinese attire quoting Bruce Lee — is a subversion of racial archetypes. At one point, his younger brother chides him for not being black enough. Later, the three Chinese guys impersonating the all-powerful master Sum Dum Goy try to teach Bruce Leroy how to be black. By then, it’s clear what the movie is saying: There’s no “right” way to be. The movie — famously produced by Motown founder Berry Gordy — nods at the light skin vs. dark skin theme and at the notion that there’s an evil white man behind every treacherous scheme. It also atomizes the stigma of cultural appropriation. That’s what’s difficult to write about, and not because it’s a dangerous topic (because it’s not), but because of how adroitly everything is handled. Ultimately, Bruce Leroy’s brother comes to appreciate and respect him. This happens quietly and smoothly — it’s all a strangely subtle investigation of race for a mystical kung fu movie.

I recently watched a 40-minute Q&A panel with members of the cast. One audience member asked how the movie was able to step outside of its circumscribed market to become a full-blown cult classic and not just a black cult classic. Taimak, the actor who portrayed Bruce Leroy, said he knew it was going to do exactly that. But he could never figure out precisely why, only that it did. If Taimak couldn’t, then I can’t. I’ve never made any part of my body glow.