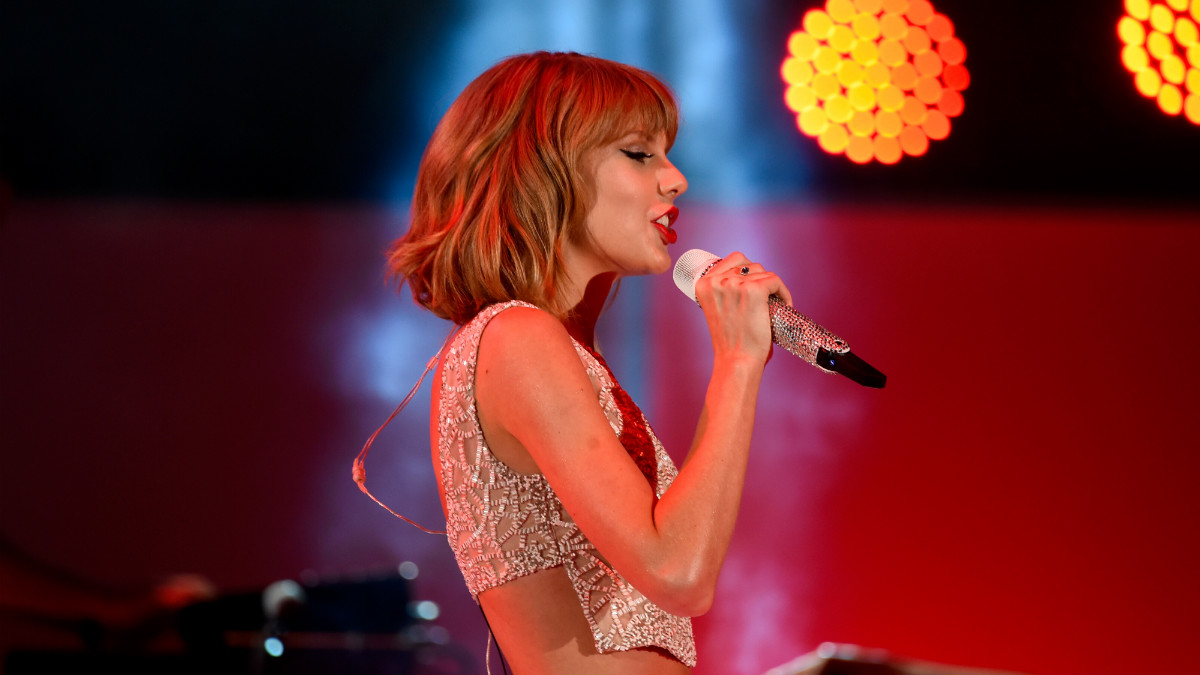 Taylor has called 1989 her “first documented, official pop album,” but her sharp pop instincts have been fully fledged since the beginning of her country crossover career. Swift’s new album is named both for the year of her birth and to signify an era in music, and she has cited Annie Lennox and Madonna as inspirations for her new direction. And while 1989 is explicitly an ode to late-’80s pop, it is also referential of late-’80s rock. Taylor’s interest in the time period — related to her general obsession with cusps — is reflective of the idea of a time when the lines between genres became more blurred than ever.

Even though it is a “pop” album, what 1989 really recalls is the ’80s genre known as AOR: Adult Oriented Rock.1 The exact definition of what constitutes the AOR genre is disputed, but to me it means heavily produced rock songs from the ’80s and early ’90s in which synthesizers augmented or entirely replaced guitars.

There is an obvious connection between ’80s AOR and that decade’s then-new concept of “yuppies.” AOR sounds expensive. It is the baroque peak of a musical decade that thrived on excess; it was Patrick Bateman’s favorite genre. You could use Bateman’s purposefully generic endorsement of Huey Lewis’s Sports from American Psycho as pull copy for 1989: “The whole album has a clear, crisp sound, and a new sheen of consummate professionalism that really gives the songs a big boost.”

On her new album, Taylor Swift employs a whole new squad of sounds and studio tools to deliver the now-classic Taylor Swift message: I love you so much, and I will kill you if you fuck with me. As a cultural marker in 2014, it’s a companion piece to Gone Girl, a call for women 2 to take back the mantle of “crazy bitch” and make it their own empowering joke.

The late-’80s album 1989 really resembles is Bruce Springsteen’s Tunnel of Love, from 1987, which saw him leaving behind his beloved E Street Band to make a solo record. At the time, it was a controversial move; Springsteen, the savior of arena rock in the ’80s, was called a traitor for abandoning his group. He was accused of heading in the wrong direction, away from rock classicism and toward pop trends. Springsteen recorded most of Tunnel of Love himself using synths and drum machines.3 But the album turned out to be an introspective meditation on his fresh divorce. It was also a very self-aware and painful dismantling of the mythical ultimate romantic Bruce had always previously painted himself as. It was stripped down in a completely different way from his 1982 solo effort Nebraska. Without the blanket of his band or the everyman persona he had built for his audience, he could risk being a little less saintly.

Taylor Swift knows a thing or two about the trouble with sainthood herself. For years, she has been the public face of good-girl-ism. A desire not to disenchant her fans, many of whom still skew very young, led her to a kind of artistic self-imprisonment in which she was prevented from really growing up in her songs and dealing with the things grown-ups deal with — mainly, sex. But by freeing herself from the sound that had accompanied her up to this point (and letting her longtime band go, Springsteen-style), Swift is suddenly free to be somebody other than the naively romantic country-pop princess she’s been thus far.

To find herself, Swift employed producers Max Martin, Shellback,4 and Jack Antonoff to craft a vision of a new-wave party for her imaginary Danceteria gig. Swift’s musical instincts are as strong as ever, and the overall project is a bit like McCartney II, the cute Beatle’s synth-heavy 1980 solo album. Her knack for a punchy hook, like Paul McCartney’s, is god mode. It’s just that instead of using guitars to deliver her messages, Swift happens to be employing different tools now.

A series of voice memos at the end of the deluxe version of the album offers a staged glimpse into the private Swift and her songwriting process. It also reveals the album’s dirty secret: These are all very much still Taylor Swift songs, just slickly produced in a range of progressive styles that are neither rock nor country. The skittering beats under some of the songs feel like Taylor was inspired by BFF Lorde. Swift’s extensive use of her sultry alto range paired with the ’80s rock sound occasionally resembles Haim. “Style” is clearly influenced by the Jan Hammer–influenced electronic subgenre outrun, made popular by the Drive soundtrack. Swift is trying out new musical identities and seeing what fits. Not all the risks pay off, but those that do (drum-and-bass on “I Know Places”!) are so thrilling, it doesn’t matter. The least risky songs are actually some of the least rewarding: “How You Get The Girl” is total vintage Taylor, but it feels out of place among some of the more mature tracks, like “Wildest Dreams” and “Style” (with its pointedly sexual reference to Taylor wearing “a tight little skirt”).

Swift’s transformation from young wide-eyed idealist to self-assured sexpot with a strong paranoid streak has been gradual and, through her songs, documented every step of the way. While Red made oblique reference to her sensuality, 1989 is overt. The album is about an intensely passionate relationship that she knows won’t last from day one, and it’s clear it’s centered around a sexual connection. Swift is right on track for her twenties, sorting out the often hard-to-define differences between lust and love. Lyrically, that can be both vivid and repetitive, but the repetition lends it a certain haunting quality. There are repeated references to Taylor’s lipstick and “rosy cheeks,” and lyrical themes from her past (rain, party dresses, regret) reappear. The whole thing feels a little bit like a murder mystery, with Taylor as its Laura Palmer. Who killed “Haylor”?

What makes Swift so successful as an artist — her ambition, her talent, her extreme obsessiveness — is what also makes her intimidating to some men as a potential girlfriend. From her earliest songs, she has discussed her extreme passion and how she gets labeled for it. One of her earliest big hits, “Picture to Burn,” from 2006, originally contained the lyric “So go and tell your friends that I’m obsessive and crazy / That’s fine — I’ll tell mine that you’re gay!” She changed the “gay” lyric, but it was one of the things that made her fascinating. Her entire image was an extremely feminine construct, but she was so angry. What makes Taylor so relatable, such an everygirl, is that her dark side is always so apparent under the sweetness and light. And on 1989, Taylor Swift, now 24 years old, is ready to lean into the darkness.

Though she’s always been defensive about being labeled as emotionally unstable, Taylor Swift plays with her lovelorn nut-job image on 1989. Even in the first hours of the album’s release, this has already earned her comparisons to music’s other great romantic psycho of our time, Lana Del Rey, and rightly so. Lana and Taylor share a compulsive interest in the subjects of seduction and betrayal, and they both present as rigidly feminine5 in a way that is so artificially perfect, it ends up demonstrating the cracks in the whole concept of traditional femininity. According to 1989, Taylor, like Lana, is into boys who look like James Dean and eventually make her cry, and — also like Lana — she both romanticizes and interrogates that weakness. Of course, the real question is: How can either Lana Del Rey or Taylor Swift possibly be the masochistic submissives described in their songs and also such boss bitches onstage? It’s cathartic to hear Taylor intone, “Got a long list of ex-lovers / They’ll tell you I’m insane” on “Blank Space.” Taylor Swift is crazy like a goddamn fox.

The negative traits ascribed to Taylor always sound like a greatest-hits list of every bad characteristic associated with womanhood: too emotional, too weak, too naive, too uptight, too slutty. But it’s obvious that Taylor is weak only in her songs, because that’s the only place she can afford to be, and that her weaknesses are also her muse. 1989 is a portrait of an artist in flux between her fairy-tale idealizations of love and her recently acquired cynicism. And what better time for her to start pushing the boundaries between traditional musical genres? Anyone weeping teardrops on their guitars can rest easy knowing that she’s already declared she’ll probably return to a guitar-focused singer-songwriter style eventually. But given how well 1989 turned out, maybe she shouldn’t rush back?