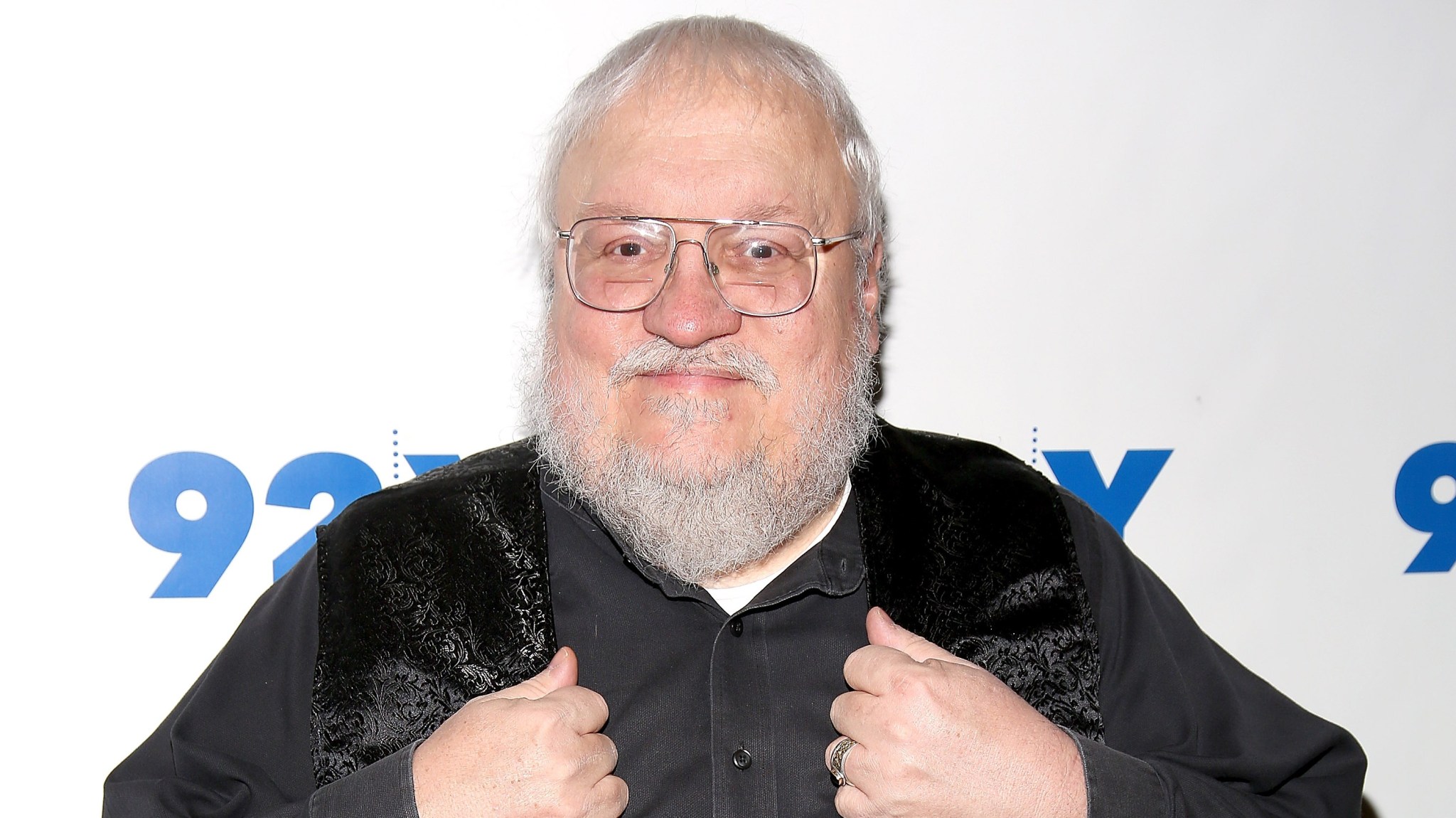 “There are none who can say with certain knowledge when the world began, yet this has not stopped many maesters and learned men from seeking the answer.” Indeed. So begins the soon-to-be-released new coffee table compendium of the fictional history of George R.R. Martin’s A Song of Ice and Fire series, The World of Ice & Fire, co-written by Martin himself along with the superfans-turned-faux-fact-archivists and Westeros.org webmasters Elio Garcia and Linda Antonsson. On Sunday night, Martin appeared at the 92nd Street Y on the Upper East Side of Manhattan, in a talk moderated by Salon’s Laura Miller, to discuss his new book that is not the book that all his fans are waiting for.

For any of the millions of people who have read or are reading George’s ASoIaF books, or the millions upon millions of people who watch the HBO series A Game of Thrones by legal and illicit means, I’m guessing there are two details that define the series: (1) the story’s ruthlessness, its willingness to do away with any character, no matter how seemingly integral, often in ways that are gut-wrenchingly awful; (2) its astoundingly immersive, granularly detailed fictional history. World building is, of course, a feature of all fantasy and sci-fi fiction. Martin seems to delight in going above and beyond what is actually required to simply tell the story. At times, that can make his books a tedious slog. When you find yourself waiting years for the next installment of the series, those swamps of pages you found yourself bogged down in — the descriptions of the feasts and the sigils and the clothing — can become a rich vein of unmined narrative. They may not move the story forward, but they do expand the scope. Martin’s books mention, in varying levels of detail, rulers and their kingdoms, their wives and husbands, their families, their paramours, their animals, and the tragedies that befell them stretching back for centuries before the events that brought the Starks and the Lannisters to war and Dany to Slaver’s Bay.

The World of Ice & Fire takes all of those disparate references to cataclysmic events and mass migrations and fleshes them out along with lush illustrations of notable characters, places, sigils, and lineages. Herein are the tales of the Dawn Age, the Age of Heroes, the Doom of Valyria, the Andal Invasion, Summerhall, the wars between the First Men and the Children of the Forest, and much more that has never been seen, including the Summer Islands and Sothoryos. It’s something his fans have been asking after for years, including his co-authors, Elio and Linda, who began peppering Martin with questions about Westerosi history over email back in the mid-1990s. “This is a book that really began with my readers and my fans. Of course with any epic-fantasy the world is a character,” said Martin at 92Y.

As George’s story grew — from a planned trilogy of books to a sprawling and currently theoretical seven, which doesn’t include prequels — the many hundreds ofcharacters great and small and the various place names on two different continents simply became too unwieldy for their creator to keep track of on his own. Enter Elio Garcia, who at that time was simply a fan of the books, to point out certain inconsistencies contained therein.

“He really does have a frighteningly exhaustive knowledge of my world and my characters,” said Martin at 92Y. “When I write a new chapter, it saves me time. Rather than go back and checking all the details, I send it to Elio and say, ‘Did I contradict anything I said in a previous book?’ and he’ll say, ‘Yes, you did, this character you killed three books ago.’” From superfan to webmaster to fact checker and now co-author, this is like getting called up from the fantasy geek minor leagues. 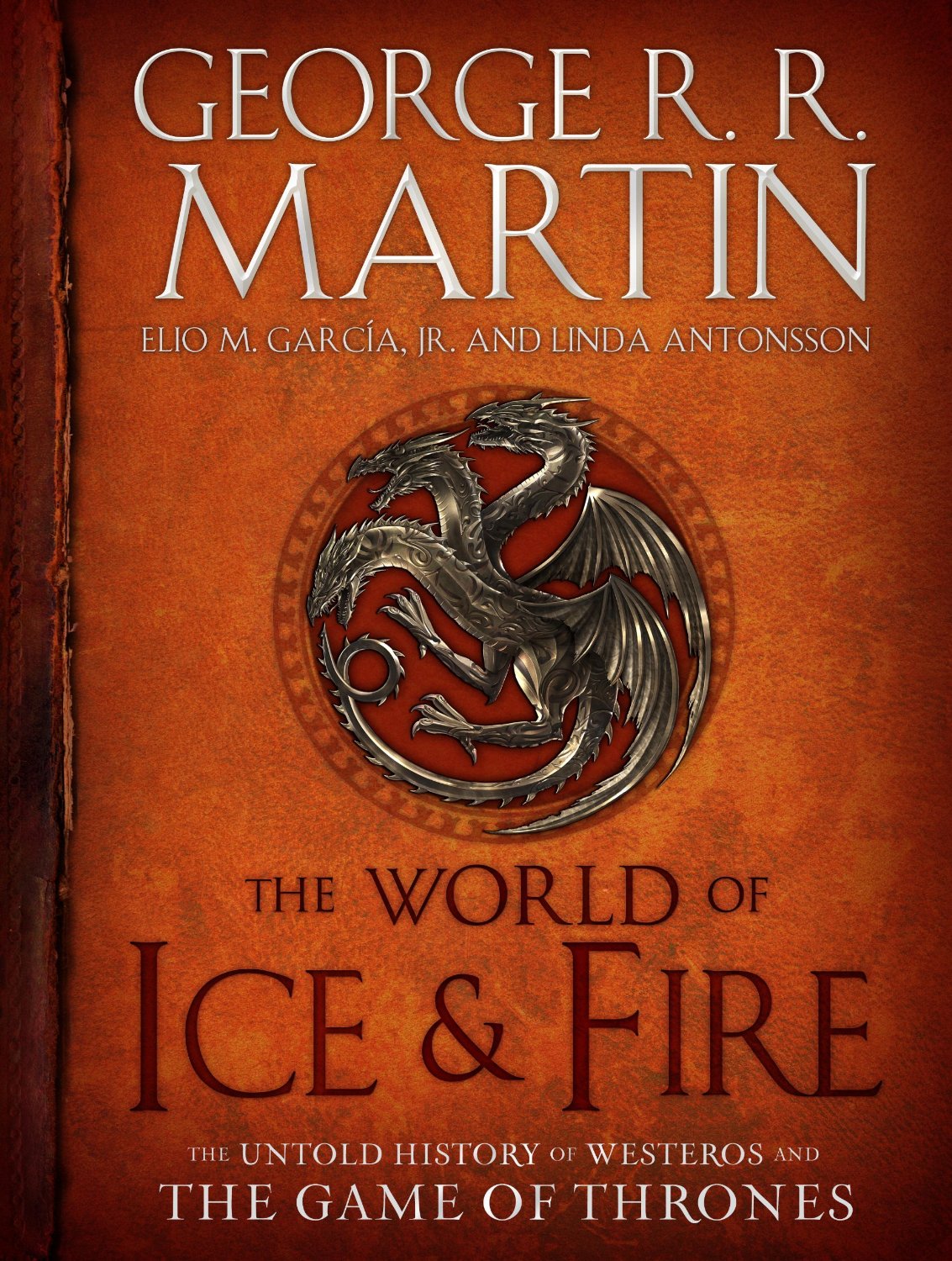 The road to The World of Ice & Fire is as winding as Martin’s story. It was originally contracted to be published in 2008. It actually arrives in stores, virtual or otherwise, on the 28th of October, 2014. “You know how that goes,” said Martin to much laughter from the audience. Along the way, as happens to all things Westeros, the story just grew and grew and grew. The plan was for Elio and Linda to come up with an outline of sorts, based on what was known from the existing books, and for George to then flesh out the details. The contract with Bantam called for some 50,ooo words. Elio and Linda sent George an outline in the neighborhood of 70,000 words. George, for his part, fleshed the thing out to the tune of 300,000 words. And you guys wonder where the sixth book is.

Martin’s needle-point detail work is, at least in part, inspired by Tolkien’s Lord of the Rings universe and his posthumously published Silmarillion concordance of fictional myth, legend, and history. “One of the things he (Tolkien) did that was really extraordinary was create Middle-Earth in such detail. If you look at some of the pre-Tolkien fantasy, it’s written more in a sort of fairy tale,” said Martin. “You won’t know who is the king’s father, who is his grandfather, or how the dynasty came to power, or how long it’s ruled, or what the neighboring countries are … Tolkien gave us all these histories. Since then, that’s become the style for epic-fantasy. It’s something that fantasy readers now expect. They expect a fully realized secondary world, as Tolkien called it. Certainly that’s what I set out to create in Westeros.”

In a sense, then, The World of Ice & Fire is fan service at its highest level. Or at least the level right below, you know, actually managing to finish the books in the series. But, watching George recount something of his process, I couldn’t help but think the two things are, on some level, related. The problem isn’t that George “won’t write the books.” I think it’s that “we” — i.e., the fans of A Song of Ice and Fire and A Game of Thrones — won’t stop asking him about this or that detail from the story, ascribing every word with possible future significance. Surely this level of appreciation must be gratifying to Martin. It’s also not hard to see it as possibly paralyzing.

At one point, Martin talks about how, when he was writing the appendices for the first book in the series, he figured he should fill in the kings who came before Robert Baratheon and after Aegon the Conqueror. “I invented a bunch of kings’ names and dates and I put that in the back of the first edition of A Game of Thrones,” Martin said. The problem was, when he later published the prequel story The Hedge Knight, set 90 years before the events of the main story, the dates in the the original appendices didn’t jibe with the ages of the Targaryens in the prequel novella.

Now, just imagine: You write a story. You include some almost throwaway character names and dates figuring that stuff is getting buried in the deep, deep back of the book. You give the names and dates very little thought, or at least cursory amounts of thought. It’s just a fantasy book, not yet a multi-platform juggernaut complete with smartphone apps, several fully realized fake languages, and millions of rabid fans. But years down the line, those rabid fans now take every word you have ever written as gospel, or as some riddle inside of a mystery meant to be unraveled that you placed just so for some reason that will eventually become clear. The pressure to stick the landing, to arrange every word in just the right way, must now be incredible. And that’s without Martin’s fans wondering aloud if he’s going to die.

Or even just constantly bothering him with inane nerd-fight questions that Martin can’t help but end up answering. “Someone started an argument online recently; I got an email about it,” Martin explained, as a gorgeous illustration of Aegon the Conqueror riding Balerion was projected above him. “About if Drogon could beat Smaug.” Martin then goes on to explain that Drogon is too young a dragon, that Smaug can talk and therefore has “an intellectual advantage.” Anyone who complains about George not writing whenever he makes an appearance at a convention or an awards show, who wonders Internet sotto voce if he’s too fat to live and see the thing through, should also rail against whoever the fuck is emailing him Smaug vs. Drogon threads in hopes that he weighs in. Because he probably will.

Still, it’s a testament to the depth of the world George has created that so many can so easily become lost in it. Perhaps even Martin himself. It’s clear that he has tales even beyond the core story, if and when he finishes it. “I’ll get to them eventually,” he said.

Filed Under: Game of Thrones, TV, Books, George RR Martin, The World of Ice & Fire, We Went there