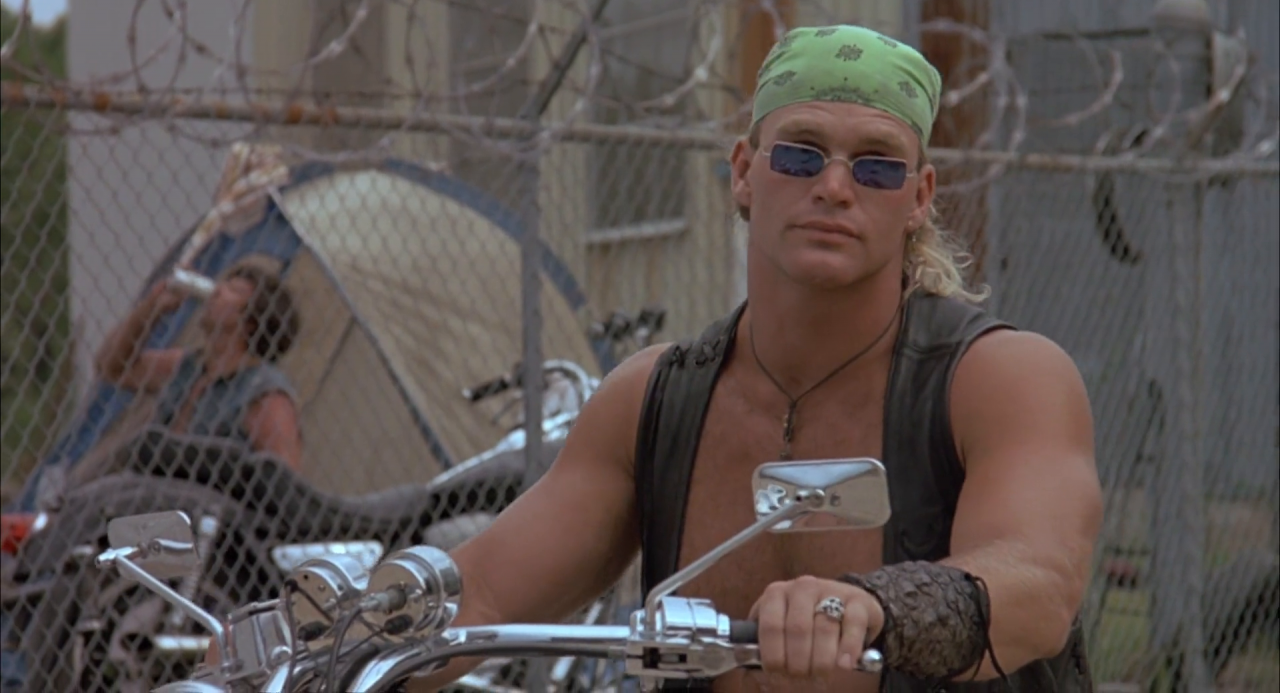 On Tuesday, a 30 for 30 documentary about Brian Bosworth will debut. I have to assume that since you are reading Grantland dot com you are (a) familiar with Brian Bosworth, in which case I do not have to explain who he is and why he is important; or (b) my mom, in which case I still don’t have to explain who he is because you don’t care, you just want to read this so that you can tell me that you read it because you’re a dope mom. Either way, we can move forward.

The 30 for 30 will be very cool. It will be about a mature Brian Bosworth looking back at, and considering the catastrophic path of, The Boz, Bosworth’s destructo-bot alter ego. That’s always an interesting premise for a story or documentary. The only thing better than a controversial figure is the remnants of one considering the ramifications of having been one. But that’s not what this right here is about (at least not totally, and certainly not for the next 700 words). This right here is about a guy getting his hand shoved into a spinning motorcycle tire and a Komodo dragon that likes Snickers. This right here is about Stone Cold.

Stone Cold was a movie that came out in 1991. It starred Brian Bosworth as an overly aggressive Alabama cop forced to work undercover with a germophobic FBI agent to help take down a white-supremacist biker gang in Mississippi.1 It was supposed to jump-start Bosworth’s acting career, but mostly it just reminded everyone that football players tend to be better at playing real football than playing fake anything else.

I’d intended to make a list of all of the ridiculous things that happened in the movie, but after I rewatched it I realized that would have basically just been me writing out the whole movie. To wit, this happens in the first three minutes and 34 seconds:

A man shoots a bunch of boxes of Ritz crackers with an assault rifle and another shouts, “I love it!” in response (0:35). I don’t know that anyone has ever disliked Ritz crackers more than these two guys here. Also, the guy who shouts “I love it!” is the same guy who stared into the surveillance camera. He’s the leader of the group. The group does not successfully complete the robbery, you probably could’ve guessed.

Brian Bosworth shops for groceries while wearing a Tombstone-style leather duster (1:00). Bosworth is an incredible human in Stone Cold. His jawline looks like the bumper on a Mazda. His shoulders are the width of a refrigerator. His hands look like 12-packs of Coors Light. His whole everything looks like you copy-and-pasted an image of Patrick Swayze into Microsoft Paint and then clicked Ctrl+. Also, he has a mullet in the movie and the mullet has highlights. I kind of don’t understand how Stone Cold didn’t have a billion-dollar opening weekend.

Brian Bosworth eats a cookie with his eyes closed because it’s so delicious (1:39). It’s one of those grocery store cookies that they keep in the case with the glass doors that open. He sneaks it out and eats it, which is super confusing. Does he somehow not know that the robbery is taking place (he’s supposed to be a super cop, so this seems unlikely)? If he does know, why is he sneak-eating it (he’s supposed to be a badass)? Who knows? I don’t know. I know Arnold Schwarzenegger never sneak-ate a cookie. Arnold Schwarzenegger fought an alien in a Costa Rican jungle.

Brian Bosworth defeats the main robbery bad guy by putting some oil on the floor, which causes the bad guy to slip and fall into a stack of sodas and get knocked unconscious (3:12). The police show up immediately afterward. A uniformed officer asks Bosworth what happened, then reminds him that he’s on suspension (for use of excessive force in apprehending criminals, we find out later), then says he can’t wait to see Bosworth sweet talk his way out of this one. Bosworth’s boss walks in one second later, then says to Bosworth, “What do you gotta say for yourself this time?” Bosworth smirks, looks off to the side at the incapacitated robbers strewn about the store for a moment, looks back at his boss, smirks again, then says …

YOU GOT A CLEAN-UP ON AISLE 4.

AND THEN A GUITAR WAILS LOUDLY AS BOSWORTH WALKS OUT OF THE STORE.

HE SWEET TALKED HIS WAY OUT OF IT.

The rest of the movie is just like that. It’s great. It’s amazing. It’s so much fun. It’s the most enjoyable, likable, surfable portion of The Boz’s wake. And, really, it should’ve put him on a path toward, at the very least, hokey stardom. Stone Cold is better than every single Steven Seagal movie by about a trillion feet. Steven Seagal can eat it.

There was this big, great cover story for New York Magazine written in April of ’91 about Bosworth and his place in what people thought was a changing of the guard in Hollywood’s action movie stars. The story talks about Bosworth and some details from the movie — apparently there was a scene in the original script where someone gets sodomized with an ear of corn, a cut that I think we can all agree now was a big, big, big mistake. Mostly, though, it talks about all of the positioning that went into attempting to turn Bosworth from a professional football player into something truly large, truly special, truly timeless — how after a while he only did interviews with non-sports magazines, only did commercials and appearances that would further his non-football brand, things like that.

The best part of all, at least with respect to the way Bosworth was so goofily and unintentionally charming, comes in this blurb near the end of the story:

“A movie that offended the Boz’s sensibilities wouldn’t do, of course, and so a number of the more gross scenes were eliminated. [Gary] Wichard [Bosworth’s agent] also insisted that the script be ‘Bozzified,’ that is, structured around the preexisting Boz persona. The character had to be a ‘hip guy,’ Wichard explains, ‘the kind of guy every guy wants to be like and every girl wants to be with.”

Stone Cold is 92 minutes of Bosworth beating people up and riding motorcycles and looking like a mountain. There are two parts in the beginning of the movie, though, where we see Bosworth in his home. In the first, he’s making a smoothie for his pet, a Komodo dragon. He puts eggs, potato chips, Snickers, and more in it. In the second, he’s wearing black panties and pretending to be groggy after his new FBI partner shows up at 6 a.m. so they can get to work.

Between Bosworth and Wichard, the hippest version of a guy they could imagine was a guy who had an unhealthy Komodo dragon for a pet and wore black panties and rode a motorcycle. That’s the persona they built to rocket Bosworth into stardom.

Filed Under: Movies, Brian Bosworth, The Boz, Stone Cold, 30 For 30