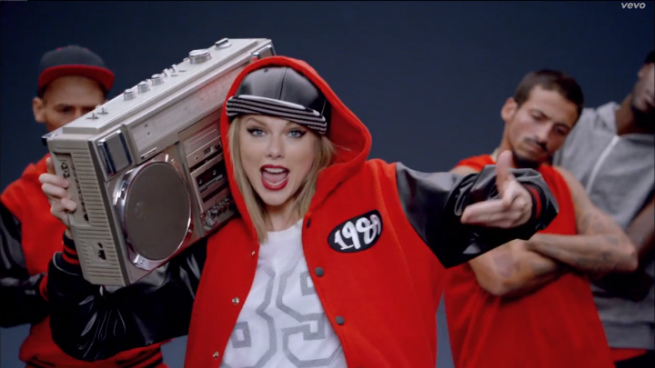 Ladies and gentlemen, I give you the official theme song of Pumpkin Spice Latte season: Taylor Swift’s new single “Shake it Off”! And just like a #PSL, “Shake It Off” is sugary, makes you hyper, and is already beloved of girls in yoga pants. I have a high tolerance for saccharine pop; this summer I have stanned for Becky G, Meghan Trainor, and candy princess Ariana Grande. But man, did “Shake It Off” leave me conflicted. I don’t hate it; I realize my expectations for Swift’s career path are both overly high and uselessly personal. It’s also impossible to be mean about this song without becoming one of the haters Swift is singing about. Far be it from me to decide whether Swift can shake it.

“Shake It Off” is a dance song for people who can’t dance. It’s an oxymoronic treble-heavy booty bass song for girls with no butts. The video depicts Taylor doing her Elaine Benes dancing in a variety of setups, some of which hinge comically on her whiteness and all of which made me feel the same kind of embarrassment I feel whenever Katy Perry attempts improv comedy.1 But Taylor’s dancing is always very enthusiastic, and I do believe that enthusiasm can make up for a lack of skill. You have to forget about your own self-consciousness and judgmental haters to feel free to dance in public. Taylor obviously connects with Katt Williams’s excellent suggestion: “Just go to the club and make up your own motherfuckin’ dance.”

Taylor has been hinting for months that her upcoming album 1989 will be a straight-up pop record, which Red’s singles “I Knew You Were Trouble” and “22” certainly laid the track for. I have always championed Taylor, but she’s not the critical underdog for serious cred she once was. “We Are Never Ever Getting Back Together” made no. 169 in Pitchfork’s Top 200 songs of the decade so far (to which I reacted with a Taylor-like “What?????” because “I Knew You Were Trouble” is such an obviously better choice). Literally everyone is checking for Taylor, and they all want different things from her that she can’t deliver simultaneously. She’s trying to reclaim “basic” as a positive term. You think she’s too vanilla? Well, too bad, because VANILLA IS THE MOST POPULAR ICE CREAM FLAVOR IN THE WORLD. What do you expect, FKA swift?

My favorite part of the “Shake It Off” lyrics is that she uses the NorCal slang “hella.” I was surprised to learn that people think Taylor stays out too late, because I have literally never heard anyone suggest that. Isn’t her whole thing staying in on weekends, baking pies while everyone goes to the clob? The song insinuates that she probably spends a lot of time dancing in her room to Robyn songs, as do we all!

This is as close as Swift flies to Miley Cyrus Bangerz territory, but the genius of “Shake It Off” is that you can’t twerk to it.2 The only option is to do jittery Swifty dancing to it, like a bunch of tween girls jumping on a bed at a slumber party. Swift’s attempts in the video at modern dance are very Frances Ha. Is Taylor playing up her inherent awkwardness in this video/album cycle as an attempt to dispel the notion that she is an ice princess? Is Taylor Swift the Nathan Fielder of pop? (Can I pay a million dollars to watch Swift and Fielder do the Pulp Fiction Batusi dance scene?)

Here’s the thing: Taylor’s transformation from heartbroken country dove to carefree pop swan is actually right on schedule. She’s like any girl in her twenties (she’s now 24) who has reconciled her overblown hopes about romance with reality, decided not to give a fuck, and become much happier for it. She’s still throwing in jabs about her callous exes, but no longer seems dependent on anyone’s approval, particularly straight men’s. This makes her a million percent more attractive, because she’s maturing into a person who owns the most embarrassing parts of her personality. Even dancing awkwardly throughout “Shake It Off,” she seems more comfortable than ever.

During my first few listens of “Shake It Off,” I went through a spectrum of feelings, starting with “whaaa?” and moving into “huh.” Soon, though, I realized: This song is The Strain. There’s no escaping it; it will burrow into your eyes and ears sooner or later. After my 20th listen, I had reached my final verdict: ¯\_(ツ)_/¯. Haters gonna hate. Taylors gonna Tay.

There's a New Aphex Twin Album on the Way, As Advertised on the Deep Web