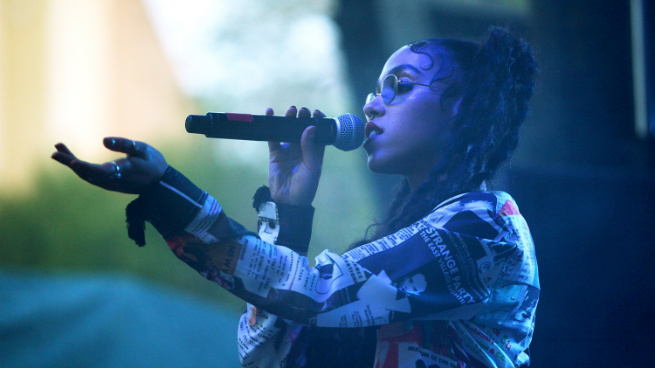 What’s in a genre? British artist FKA twigs (a.k.a. Tahliah Barnett) has been declared the new face of what’s being called “indie R&B,” but such classifications don’t feel very relevant to her debut full-length album, LP1, which is too slippery and strange to hold to any one mold. FKA twigs’ chilly voice and minimalist productions earned her immediate comparisons to Aaliyah, but beautifully creepy videos like “Two Weeks” owe just as much to Björk. There are bits of skittering trip-hop and flashes of baroque cathedral music, but it’s no throwback; LP1 doesn’t sound exactly like anything you’ve ever heard before.

When she was in her late teens, Barnett moved to London from her hometown of Gloucester to pursue a career as a dancer. She found work in the insular London pop music scene, appearing in videos for U.K. faves like Kylie Minogue, Ed Sheeran, and Jessie J. The LP1 track “Video Girl” is a melancholy take on Barnett’s days in the titular profession, and Barnett’s background as a dancer recalls Kate Bush, who made movement an integral part of her performances. “Water Me,” Barnett’s debut single/video as FKA twigs, felt as much like a portal into a hitherto secret universe as Bush’s debut “Wuthering Heights” had. The Bush-inspiring Brontë sisters are in FKA twigs’ lineage as well, making her a part of a tradition of the genius British female autodidacts. Like Wuthering Heights and “Wuthering Heights,” FKA twigs’ music delves into the darkest side of romantic infatuation. Barnett shares the Brontë sisters’ gothic preoccupation with lovers separated by vast distances: physical, emotional, circumstantial, even across the uncrossable chasm of death.

Barnett also has an antecedent in Sade Adu, another singer who shakes off easy labels. In pursuing her own completely unique sound, Adu became the most successful solo British female artist in history, quietly storming the field to broaden notions of black British musical artistry. Sade bucked the notion that soul singers needed to be loud and warm, taking cues from cool jazz, bossa nova, and other downtempo genres instead. Like Sade, Barnett recognizes the enormous power in holding back; passion is often defined by the inability to fully express it. When she does emote, it’s all the more powerful for slipping out into this climate of restraint. Both Adu and Barnett traffic in saudade — the semi-untranslatable Portuguese term that describes the feeling of longing for someone or something that you know will probably never return.

Genres in general seem increasingly less relevant in the Internet musical age, when every listener is an omnivore. Barnett has been grouped with darkwave indie R&B artists like The Weeknd and Kelela, but that feels reductive to all three — more and more, “R&B” seems like more of a racial classification rather than a musical one. On The Awl, Jozen Cummings rightly pointed out that the classification “indie R&B” seems like “a nice way of saying it’s R&B that white people like,” which is “myopic, lazy, and it sounds to me like a form of musical segregation that’s not entirely based on genre.” Referring to eclectic black indie musicians as R&B by default feels shallow and dated, particularly in the post–“Hey Ya!” universe. Many of these so-called “indie R&B” artists owe a lot to Prince, who demonstrated that eclecticism was a necessary aspect of black music, and who still often gets referred to as a soul artist rather than a rock star even though he shreds harder than any other living soul.

FKA twigs’ genre agnosticism also puts her in line with contemporary female artists like Lana Del Rey, Janelle Monáe, and Grimes, who established their strong sounds and visions with a great deal of help from their Internet presences, and who flutter far out of reach whenever they’re attempted to be pinned down as any one thing. Like Del Rey or Claire Boucher or any savvy rising pop star, Barnett has employed music videos as much as music to establish her very specific and personal aesthetic. She and her forward-thinking contemporaries all seem to hail from other planets entirely, ones brought to life so vividly through their art that they feel much more real than boring old banal Earth. Our current selection of available genres are not tailored to her endlessness, so she has to seek her own new worlds. Barnett’s voice reaches across the astral plane for something to grip on to, but finds only a galaxy of cold stars and cosmic dust.

Hollywood Prospectus Podcast: 'The Knick,' 'The Strain,' and TV Stars at the Movies