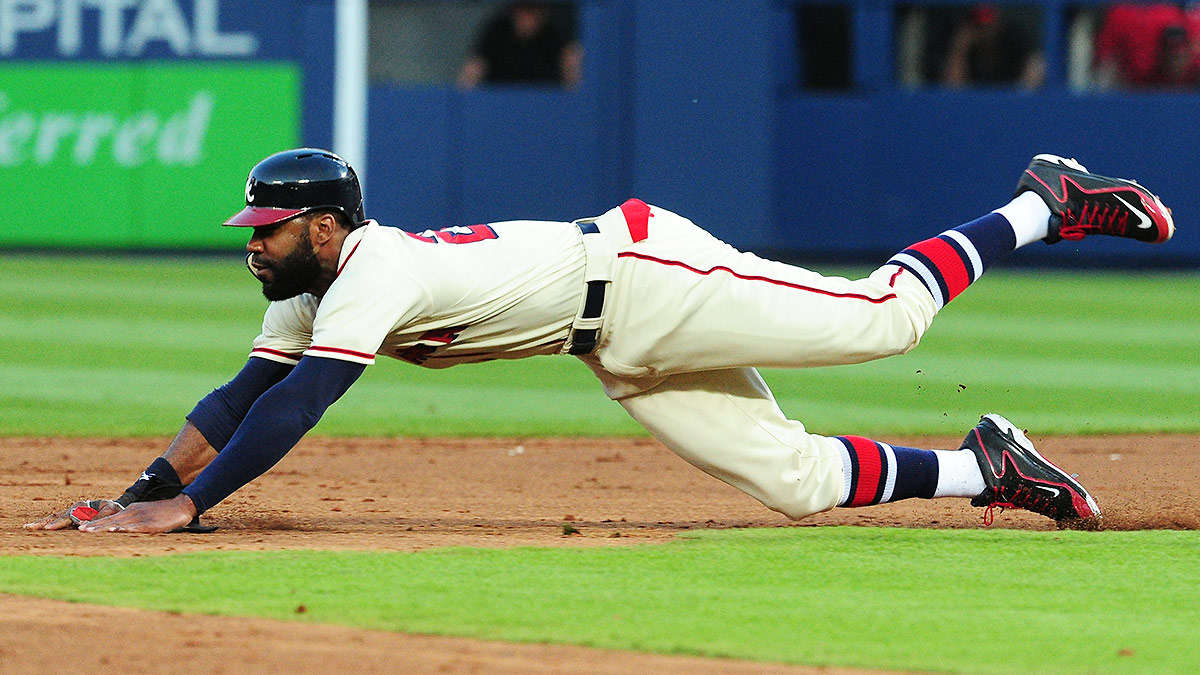 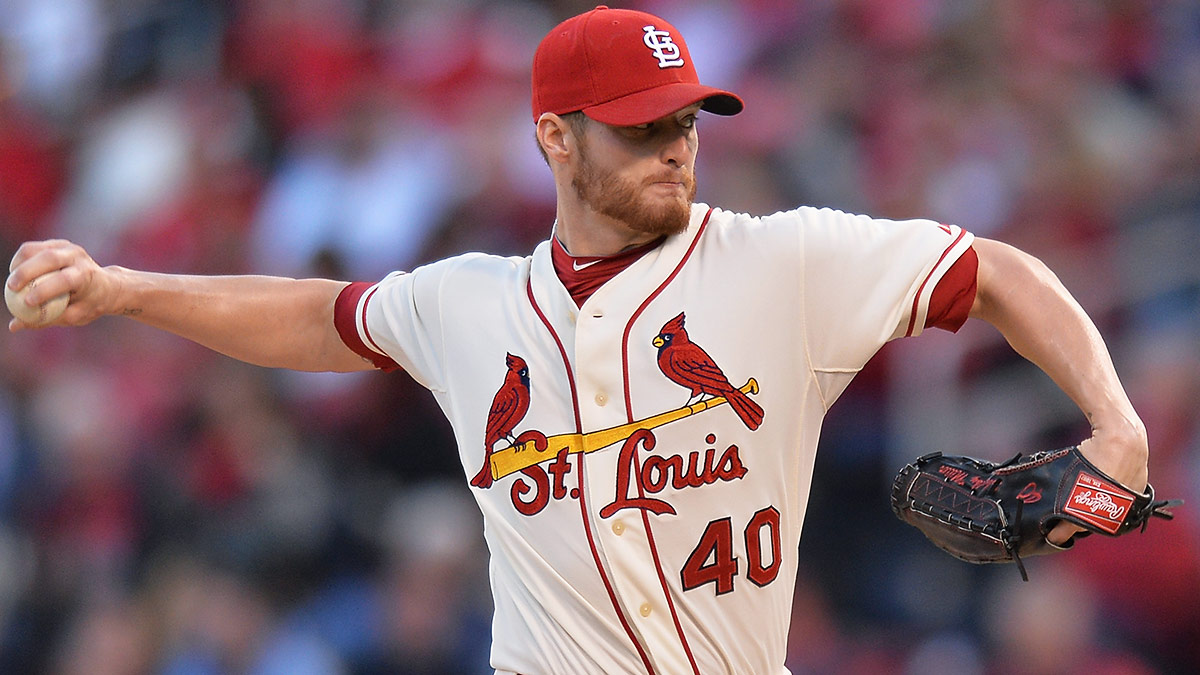 At first, this seemed hugely surprising. Why would the Cardinals give up a talented 24-year-old pitcher who already has 63 major league starts under his belt? Or a 22-year-old former supplemental first-round pick with a live fastball and prior top-100 prospect standing? And why would the Braves move a player who ranked as one of the top 10 position players in 2014 and one of the top five over the past three seasons, according to FanGraphs’ wins above replacement metric? Or one of the best relief pitchers in the league? Even by “you have to give up a lot to get a lot” standards, this one threw the baseball world for a loop.

Still, it actually makes a lot of sense for both teams.

When ace Cardinals writer Derrick Goold started reporting the possibility of a Heyward-to–St. Louis deal last week, he noted that even if the Cards were willing to spend big on a bat this offseason, they’d remain mindful of two organizational tenets: (1) an aversion to huge free-agent contracts, and (2) an aversion to deals that would block their prospects’ path to the big leagues. Trusting young slugger Matt Adams rather than devoting 10 years and a quarter-billion to Albert Pujols is merely the most glaring example of that policy in action.

Acquiring Heyward checks all the right boxes. He’ll cost $8.3 million in 2015, so he’s not cheap, but he’ll be eligible for free agency at the end of next season, which means he’s not a long-term commitment. If Heyward hits the market a year from now after receiving a qualifying offer, the Cards will gain a valuable compensation draft pick (and the draft allotment money that comes with it) while also giving talented, homegrown outfielders Randal Grichuk and Stephen Piscotty a crack at starting jobs in 2016.

And, of course, Heyward can play. He’s such a talented defender that MLB made him the poster boy for jaw-dropping range when it unveiled its Statcast tool last offseason. Despite being a 6-foot-5, 245-pound behemoth, he’s a swift baserunner and base stealer, swiping 20-plus bags in two of the past three seasons1 and making numerous graceful first-to-third runs. He’s a patient hitter (with a career 11.2 percent walk rate) who’s shown flashes of incredible power and has fared well against right-handed pitching, batting .281/.374/.466 against it in his career despite playing in a pitcher-friendly park.

Of course, if he were perfect, the Braves would’ve kept him. Heyward has been an erratic hitter throughout his five-year career, with particularly big problems against lefties, who’ve limited him to a .221/.301/.349 line. And while his defense has been phenomenal by both statistical measures and the eye test, Heyward’s disappointing offensive numbers relative to expectations have made him a one-man argument for moving away from WAR as baseball’s go-to catch-all stat, since it rates him so favorably despite his limitations.

Still, given Heyward’s combination of righty-mashing offense, great defense, speed, and contract status, he seems like an ideal fit. Given the Cardinals’ recent history of shrewd moves, it wouldn’t be a surprise to see him finally put it all together in St. Louis, giving GM John Mozeliak an enviable dilemma: whether to give a 25-year-old, multi-tooled outfielder a contract extension at a discounted rate, or collect a high compensatory pick and turn things over to the next batch of kids.

But just as thinking of Heyward as either a top-five player or a massive disappointment who invalidates sabermetrics ignores the vast middle ground in which he actually exists, framing Miller as either a future Cy Young winner or a ghost also misses the far more likely reality. While Miller’s second full major league season was a disappointment, with sharp spikes in ERA (3.74 in 2014 vs. 3.06 in 2013) and FIP (4.54, 3.67), he still showed flashes of brilliance, including in September, when he allowed just two earned runs over a pivotal four-start stretch that helped propel the Cards to the NL Central crown. And while skeptics worried about fatigue and potential future injuries based on Miller’s late-season decline in 2013, he was still firing mid-90s peas through the end of his 31-start campaign.

There’s downside risk here for the Braves, but it’s a risk worth taking to get four seasons of a potentially above-average starting pitcher in exchange for a package headed by a player they had no intention of paying beyond next season. Plus, Jenkins delivered a dominant stint in the Arizona Fall League, giving the Braves further potential to win this trade in the long run. And with players like Evan Gattis (a cheap power hitter who’s an attractive commodity) and B.J. Upton (not so much!) still being dangled, Atlanta almost certainly isn’t finished dealing yet. 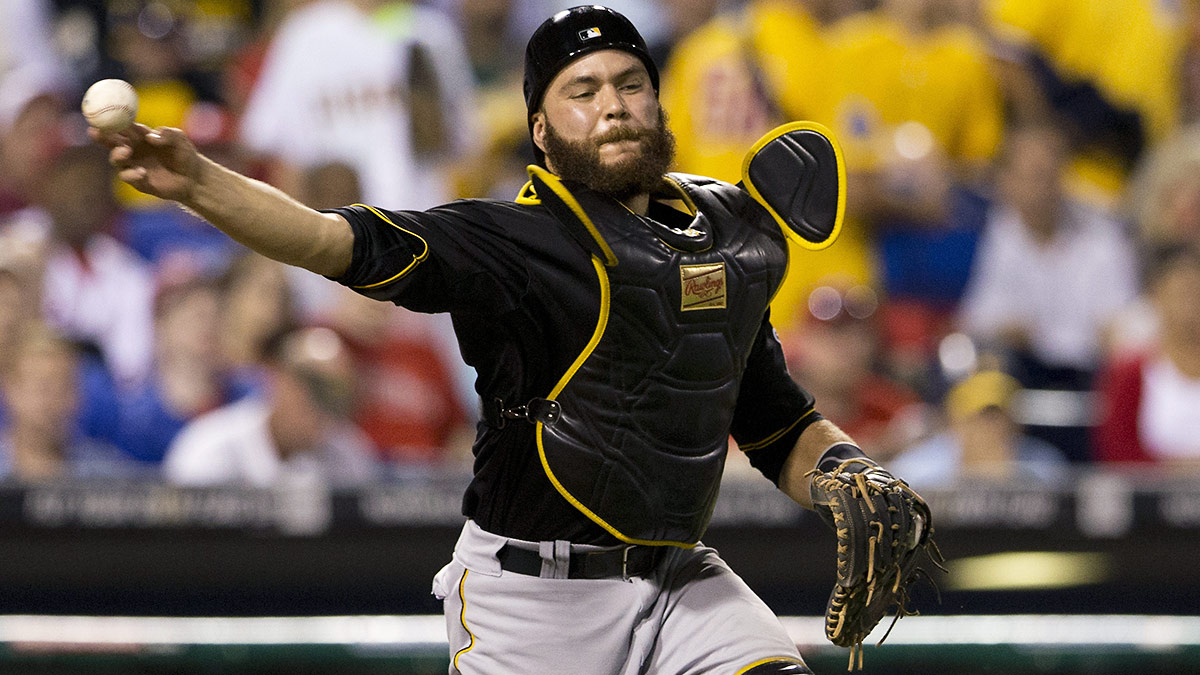 The Toronto Blue Jays signed Russell Martin to a five-year, $82 million contract, and like the Heyward-Miller trade, this can be viewed in either a positive or negative light depending on your point of view.

On the positive side, there’s this:

Since neither the other catchers on that list nor twentysomething talents like Buster Posey, Jonathan Lucroy, or Salvador Perez will be traded or hitting free agency any time soon, the Blue Jays just landed the best available catcher in the game by a mile. If anything, ranking catchers by WAR ignores a key component that baseball analysts have recently become better able to quantify: pitch-framing skills, in which Martin consistently ranks among the best. Even skeptics who doubt that stat should note that scouts praise Martin as a gifted receiver who steals strikes for his pitchers and handles a staff well.

That last point could prove most vital for the Jays. While R.A. Dickey and Mark Buehrle are owed Scrooge McDuck money in 2015, Toronto’s success next season and especially beyond will depend largely on the development of four dynamic young pitchers: Marcus Stroman, Aaron Sanchez, Drew Hutchison, and Daniel Norris. The Jays hope that Martin continues to be a master of pitch framing, game calling, and catching’s many other subtle arts, helping the team’s run prevention and improving its chances of succeeding in a ballpark that isn’t kind to pitchers.

The Pirates, one of the most analytically inclined teams in baseball, likely thought long and hard about catcher age curves in deciding how aggressively they wanted to pursue Martin, a vital player for Pittsburgh in 2014 who deserved serious consideration as a down-ballot MVP candidate. As excellent Pittsburgh Tribune-Review scribe Travis Sawchik recently wrote: Once you strip out anomalous results from the PED era, few players age well once they reach their mid-thirties, and that’s particularly true for catchers.

The Jays have had plenty of reasonable catching options over the years. A few seasons ago, they were swimming in young catchers, with Travis d’Arnaud, Yan Gomes, and Carlos Perez all in the organization. Hell, they even controlled then-catcher Mike Napoli’s rights for about 12 seconds before flipping him for Frank Francisco. If you’re into playing the what-if game, imagine the Jays with d’Arnaud or Gomes behind the plate, plus Martin’s money still in their hip pocket to spend on a pitching ace.

Once again, Martin’s reality lies somewhere between the best- and worst-case scenarios. Sure, he’s a bad bet to deliver .400 OBPs going forward. But he also walked at a career-high rate in 2014, which could continue. Toronto GM Alex Anthopoulos praised Martin’s strong contact rates (15.8 percent strikeout rate), and the veteran catcher showed a more pronounced tendency to hit the ball up the middle and the other way in 2014 … 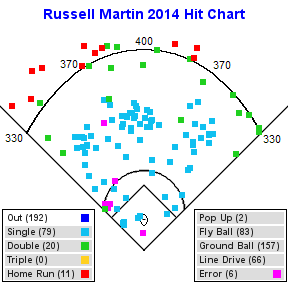 … than he had in the five previous seasons: 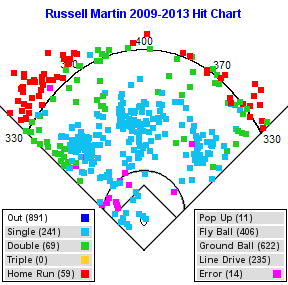 (Spray charts courtesy of ESPN Stats & Info, which tracks batted-ball data back to 2009.)

What’s more, it seems unlikely Toronto had to overpay Martin to go to what’s commonly considered a less attractive destination. That he’s Canadian is a nice bonus, but it doesn’t appeared to have cost them extra, nor will it likely benefit them. Other teams were willing to give him four years at a similar average annual value, meaning the winner of the sweepstakes (and even the runner-up) would have needed to offer five years. Plus, after factoring in the relative tax burdens, the Jays needed to tack on an extra couple million to make the dollars match up with other suitors.

Plus, the Martin signing won’t preclude the Jays from spending money to make other improvements. Martin’s annual salary breakdown will net him just $7 million in 2015, indicating that the team still plans to shell out cash this offseason, and with Buehrle coming off the books after 2015, the Jays will be positioned to better absorb the catcher’s backloaded contract. The Jays are currently rumored to be in on lefty reliever Andrew Miller and lefty starter Jon Lester, and if they refuse to, say, offer six years to Lester, it’ll be because of internal policies, not because of Martin depleting the war chest.

Finally, the Jays aren’t going to fret over Martin becoming an overpaid catch-and-throw guy in the final year or two of his deal if the first three years net an elite catcher who galvanizes a young pitching staff and helps Toronto snap what’s now the longest playoff drought in any of the four major North American sports, thus reinvigorating the biggest sleeping giant fan base in baseball.

Martin alone won’t accomplish all of that, of course. Just as the Mariners needed to keep spending after their encouraging Robinson Cano signing last winter, the Jays will need to keep building up their roster if they want to make a playoff run in 2015. That means either re-signing Melky Cabrera or finding a capable replacement; figuring out what to do in center field with Colby Rasmus a free agent and Anthony Gose now a Tiger; figuring out if Devon Travis, the player acquired for Gose, can be a playable everyday major league second baseman by Opening Day; and rebuilding a bullpen so cracked that Rob Ford was sleeping in Rogers Centre supply closets by the end of the season.2

The bottom line is that the Jays are a significantly better team now than they were without Martin. For a team that’s spent 21 straight Octobers playing golf, that’s an OK start.