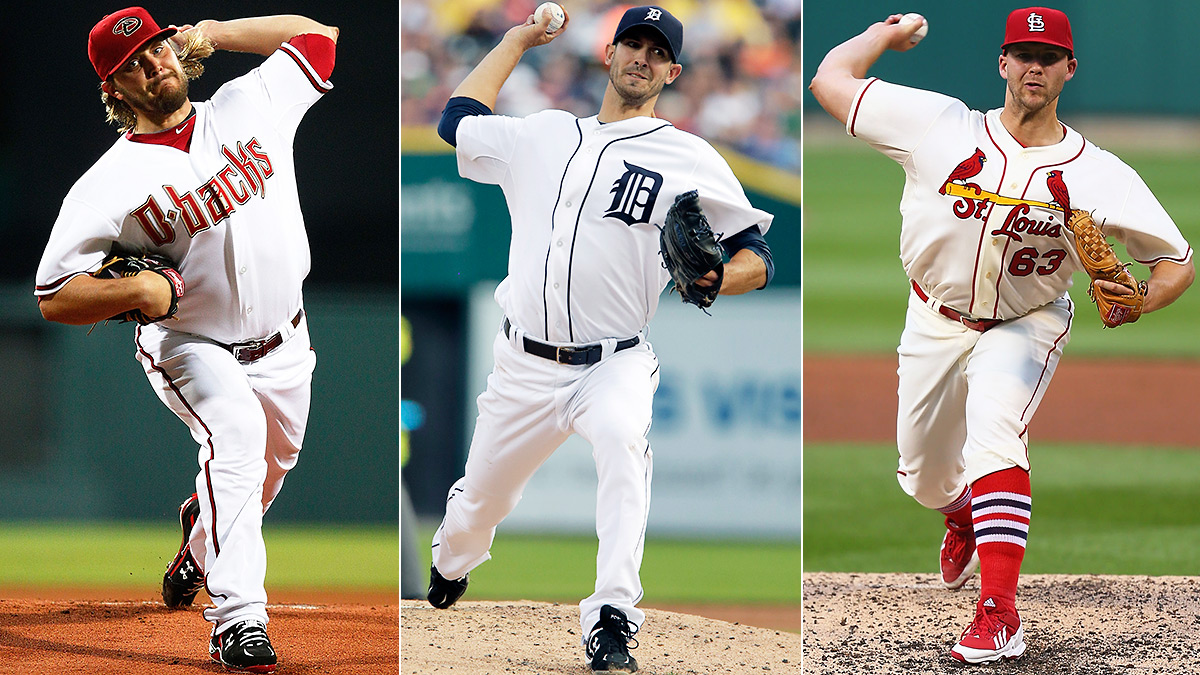 The Boston Red Sox moved quickly to make up for missing out on Jon Lester, landing three starting pitchers in the span of a few hours without sacrificing any premium prospects or raiding the vault for a massive free-agent deal.

In the headlining deal, the Sox acquired Rick Porcello from the Tigers for outfielder Yoenis Cespedes, right-handed pitcher Alex Wilson, and minor league pitcher Gabe Speier. Boston also traded right-handers Allen Webster and Rubby De La Rosa plus a yet-to-be-identified prospect to the Diamondbacks for left-hander Wade Miley. They then rounded out their assault on the pitcher market by signing free agent Justin Masterson to a one-year, $9 million deal.

The Sox seemed destined to move Cespedes after their Pablo Sandoval and Hanley Ramirez signings left them with a surplus of bats, and in Porcello, they’ve added a player who will be just 26 in 2015 and who set career bests in innings pitched (204.2), walk rate (4.9, seventh best in the AL), and ERA (3.43) last season. Porcello isn’t a star due largely to his inability to miss bats (he posted the AL’s sixth worst strikeout rate in 2014), but he’s a ground ball pitcher who ranked 25th among 88 qualified MLB starters with a 49 percent grounder rate last year, the lowest figure of his career. He’s controllable for only one more year before hitting free agency, and he’ll earn a projected $12 million after arbitration. But for a rotation that was in absolute tatters before this flurry of moves, he’s still a good get.

Like Porcello, Miley is a ground ball pitcher. Two years ago, he made a viable case for NL Rookie of the Year, firing 194.2 innings and posting a tidy 3.33 ERA that was 22 percent better than league average on a park-adjusted basis while ranking among the stingiest pitchers in the league by walk rate and making the All-Star team. By 2014, he’d tacked a full run onto that ERA, while surrendering (a few) more hits and more home runs and doubling his walk total. As a left-handed pitcher now slated to pitch in front of the Green Monster at Fenway Park, those trends aren’t exactly reassuring.

The good news is that Miley has improved in two areas. First, he hiked his strikeout rate to 21.1 percent (8.2 per nine innings) in 2014 from 17.8 percent (6.7 per nine innings) in 2012. Second, he has become one of the most proficient ground ball pitchers in the league, ranking 17th among 88 qualified major league hurlers with a 51.1 percent worm-burning rate last season. Moreover, Miley should improve after leaving a ballpark that’s murder on pitchers of all stripes. The Red Sox will control Miley’s rights through 2017, and he’ll be cheap this coming season as he enters his first round of arbitration. Even if all Miley gives the Sox is an innings-munching,1 league-average starter making about $4 million in 2015, that’ll still be plenty valuable.

The Masterson deal, meanwhile, is a classic buy-low move. Drafted and developed by the Red Sox, Masterson moseyed over to Cleveland in 2009 as part of the Victor Martinez trade. Two years later he was one of the best starters in the game, tossing 216 innings and flashing a 3.21 ERA. He’s been wildly inconsistent since, posting ERAs of 4.93, 3.45, and 5.88 over the next three seasons, with surging and diving strikeout and walk rates to match. At his best, Masterson has one-strikeout-per-inning stuff, with enough command to make him an effective innings eater (he hurled 206.1 frames in 2012 and 193 in 2013 before his injury-plagued debacle season in 2014). At his worst, he’s an injury risk and potential arsonist at Fenway.

But just like Porcello and Miley, Masterson’s pitches result in lots and lots of lots of ground balls. Since his 2008 rookie year, Masterson ranks fifth among all starting pitchers with a 56.6 percent ground ball rate; three of the pitchers ahead of him are now out of baseball, and the fourth, Tim Hudson, might be near retirement. Given how high the years and dollars climbed for Lester (and surely will for Max Scherzer and James Shields), Masterson’s ground balls alone make him well worth the relatively tiny investment the Sox made to bring him back.

Boston still has some distance to go if it wants to challenge for another division title, though. The three new guys along with Clay Buchholz and Joe Kelly offer the prospect of competence (plus a zillion grounders), but that rotation lacks a lights-out ace. The outfield has plenty of depth to cover Cespedes’s loss,2 but if his replacement winds up being a gimpy Shane Victorino and a mishmash of other guys, that’s still a notable downgrade. And as we’ve already discussed, Ramirez offers both offensive upside and significant implosion potential.

It’s still only December 11, so we should expect more moves from Boston between now and spring training, but the team has done quite a bit already. The Sox landed three capable starters as the winter meetings came to a close, and they did so with most of their money and all of their Mookie Betts/Henry Owens–caliber prospects still holstered.3 That might not be sexy, but it’s a pretty solid way to end a trip to San Diego.