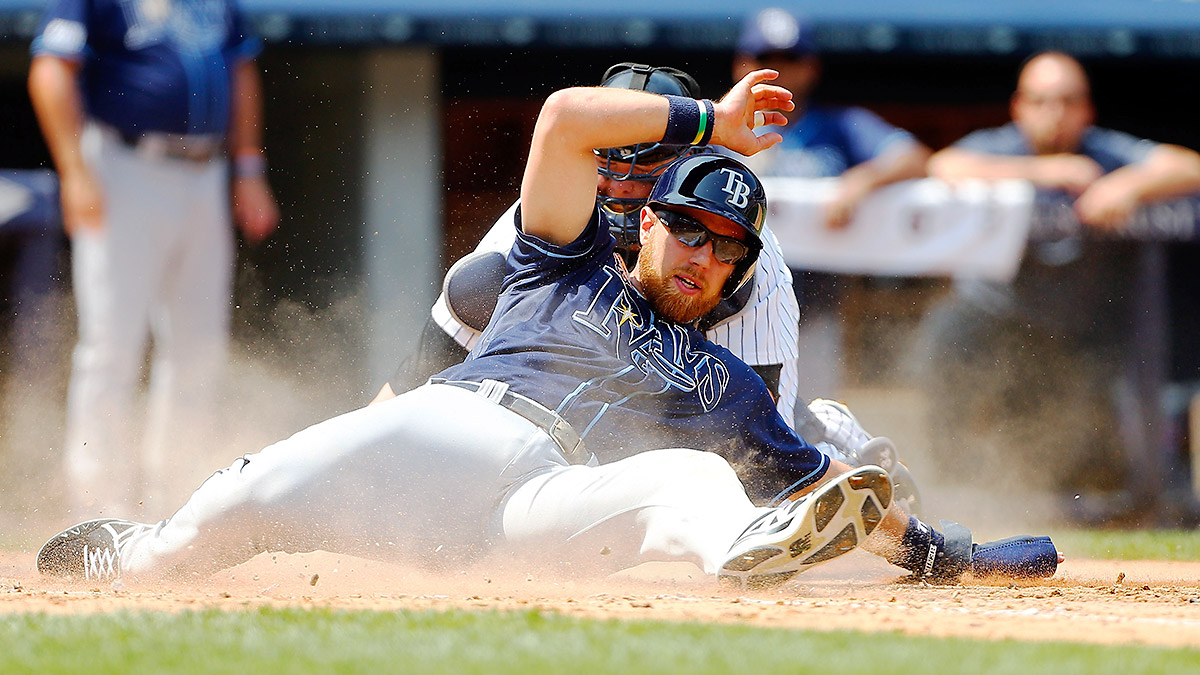 On Saturday, the Oakland Athletics made a trade that forced us (and Josh Reddick) to reassess their offseason for at least the fourth time, acquiring utility legend Ben Zobrist and shortstop Yunel Escobar from the Rays for catcher/DH John Jaso, 20-year-old shortstop Daniel Robertson (who had been the team’s top prospect), 21-year-old outfield prospect Boog Powell,1 and $1.5 million. In a bewildering winter when winning teams have been uncharacteristically quiet on the free-agent market, the Padres and White Sox fast-forwarded through their remaining rebuilding years, and the Marlins handed out baseball’s biggest contract2 while the Yankees declared Brandon McCarthy out of their price range, the A’s have somehow managed to be baseball’s most inscrutable club.

Since the offseason started, the A’s have dealt the best position-player prospect who’s changed teams (Robertson) and acquired the second-best (Franklin Barreto). They’ve traded away one player coming off a six-win season (Josh Donaldson) and traded for another (Zobrist). They’ve added and dumped expiring contracts and imported and exported players under long-term team control. They’re fascinating and frustrating, like a date who takes you home one night and ignores you the next.

In isolation, Oakland’s latest swap might be the most predictable, transparent move it’s made in months. The A’s entered the winter without a middle infield: Second base was the 2014 team’s offensive Achilles’heel, and shortstop Jed Lowrie left via free agency. Zobrist and Escobar give manager Bob Melvin solutions at both spots.

Zobrist is such a stereotypical A’s acquisition that his inclusion in this deal seems like something out of bad Billy Beane fan fiction.3 Once Adam Dunn fulfilled his destiny by DHing for Oakland, Zobrist became the most A’s-like major leaguer to have never played for the team. The 33-year-old has long since passed the point where a player becomes so renowned for being underrated that he’s actually appreciated by anyone who’s paying attention: Zobrist ranks second among major league position players in FanGraphs WAR over the past six seasons, fifth over the past four seasons, and seventh over the past two. Unlike most of his leaderboard neighbors, though, he’s never been paid as well as his production would dictate. In 2015, the last leg of a five-year extension so team-friendly it looks like an optical illusion, Zobrist will make $7.5 million, matching the salary of the inferior player the Rays preemptively signed to replace him (or Escobar), Asdrubal Cabrera.

Zobrist’s foot fits Oakland’s slipper in three ways: He walks, he switch-hits, and he plays multiple positions. In the decade-plus since Moneyball, the A’s have outgrown their affinity for college draftees and beefy on-base guys who can’t play defense, but even in 2014, with the importance of OBP lost on no one, Oakland led the league in walk rate. In the last two seasons, Zobrist hasn’t been the three-true-outcomes powerhouse that he was at his peak, producing less power, fewer walks, and fewer strikeouts, but he’s still a selective hitter who’ll have one of the best bats in Oakland’s slugger-less lineup.

Zobrist, a switch-hitter with a small career platoon split and the ability to play several positions, also suits Oakland’s pursuit of the platoon advantage: According to data from Baseball Prospectus, A’s hitters had the platoon advantage in 72 percent of their plate appearances last season, second only to Cleveland’s 74 percent. Now, Melvin has the option to fill out a lineup card composed entirely of opposite-handed hitters, no matter who his team is facing. Zobrist, who played five positions (including shortstop) last season — switching between them, often midgame, with no apparent drop-off — also satisfies the injury-conscious club’s desire for a backup plan at every position. One of these years, age will make Zobrist less mobile. When it does, it could be decades before another player combines his offensive skills with his ability to play everywhere well.

Escobar isn’t such a singular talent, though his contract ($5 million in 2015 and $7 million in 2016, with an option at the same rate in 2017) is reasonable. The 32-year-old is close to a league-average hitter, which made him worth well more than his salary when his glove graded well. But Escobar’s defensive ratings plunged last season, as he posted the worst DRS and UZR of any shortstop (two wins below average — or worse, one win below Derek Jeter). The A’s will have to hope that nagging injuries — including a quadriceps strain and a sore shoulder — and the usual small-sample fluctuation, not a permanent loss of a step, hurt Escobar’s stats. If Escobar can play the position, the A’s can push another recently acquired multi-position player, Marcus Semien, into a utility role, or spot Semien at second with Zobrist in left.

If the A’s had made the Zobrist trade earlier in the offseason, when there was little reason to think they wouldn’t be buyers, their end of the deal wouldn’t have caused a commotion. The A’s had coveted Zobrist and Escobar last year — the A’s won a waiver claim for Escobar in August but didn’t work out an exchange — and stalled deadline trade talks often resume after the season. And because Beane built the 2012–14 teams by trading prospects for veteran talent, another outgoing minor leaguer wouldn’t have been missed: Robertson, a 2012 draftee who hit .310/.402/.471 in High-A last year, isn’t even the best young shortstop the A’s have surrendered in the last six months.4

However, the way transactions are sequenced affects the way we perceive them: Just as consecutive changeups can make a slow fastball look quick, weeks of selling can make a predictable buy appear oddly timed. Dealing expiring assets (Jeff Samardzija, Brandon Moss) for prospects and salary relief fit Oakland’s established M.O. But why trade Donaldson (the team’s best player) and Derek Norris, a younger, cheaper member of the same faraway free-agent class? And why sign Billy Butler — who claimed the DH slot that otherwise would’ve belonged to Jaso, the concussion-limited former catcher — and trade for two Rays in the midst of what seemed like a sell-off?

I wrote after the Donaldson trade that the deal would be difficult to evaluate until we could see the complete plan. Now we can: While it’s always risky to assume Beane won’t make another move, the roster is mostly set. The table below lists the five highest-profile big leaguers Beane has traded this offseason, followed by the five he’s acquired (besides Butler). The columns include years of team control remaining before free agency; 2015 baseball age; 2015 salary (actual or expected); and projected 2015 WAR, courtesy of Steamer.

Viewed in concert, Beane’s winter trades have made the A’s slightly younger, slightly cheaper, slightly deeper, slightly more future-proof, and — the final, vital component that was so hard to see until the dust from the flurry of transactions settled — only slightly worse in 2015. And those tables undersell what Beane got back. Robertson, the centerpiece of the Zobrist trade from Tampa Bay’s perspective, is closer to the big leagues than Barreto, the minor league headliner Oakland acquired in the Donaldson deal, but the two are comparable talents, ranking 66th and 74th, respectively, on Baseball Prospectus’s forthcoming Top 101 Prospects list.

And the A’s also added half a Triple-A roster’s worth of young, complementary players who could appear on the bottom of the big club’s Baseball-Reference page in 2015: prospective backup catcher Josh Phegley, infielder Rangel Ravelo, and back-of-the-rotation/bullpen guy Chris Bassitt, acquired alongside Semien in the Samardzija trade; right-hander Kendall Graveman and lefty Sean Nolin, who came with Lawrie and Barreto in the Donaldson deal; Jesse Hahn and R.J. Alvarez, the haul for Norris; and second baseman Joe Wendle, the non-salary-relief return for Moss. These are all “and” prospects, as in, “The A’s traded Samardzija for Semien and prospects.” But inexpensive, unexciting players like these turn into Tommy Milone, Drew Pomeranz, and the other filler that’s allowed the A’s to avoid the awful over the last three years, compiling less negative WAR than any team but Tampa Bay.

Like a kid from Family Circus, Beane has taken a roundabout route this winter, wandering all over the map only to wind up close to where he started. If the A’s could have brought back the team that earned a wild card last year, Beane wouldn’t have had to go to such lengths to reshuffle the roster. But Oakland’s strict spending limits have always made it impossible for Beane to stand still, forcing him to stay one step ahead of age and arbitration raises in order to avoid a long losing streak. With Zobrist and Escobar on the roster and costs cut elsewhere, he can continue to keep the Wolff from the door.

Despite losing free agents Jon Lester, Luke Gregerson, Jason Hammel, Alberto Callaspo, and Lowrie, as well as a handful of trade departures worth a projected 15 wins, the A’s are still a potential playoff team. Vegas isn’t impressed,6 but FanGraphs’s projected standings for 2015, based on current rosters, give them the ninth-best record in baseball, and the fifth-best in the AL, which would put them in prime wild-card territory. One can still find fault with Beane’s individual deals — maybe he didn’t get enough for Donaldson; maybe Butler won’t rebound — or question whether day-trading is a fan-friendly way to win. But there’s no more mystery surrounding Oakland’s strategy: The A’s are contending and retrenching at the same time. As I wrote in December, “the A’s are a post-success-cycle team, and their answer to the ‘rebuilding or contending?’ question is always ‘both.’”

That answer is probably becoming more common. The Braves and the Rays have also acted like both buyers and sellers, making present- and future-oriented moves in the span of the same offseason (or the same trade, as evidenced by the Rays’ veteran-plus-prospects return for Zobrist). Under the expanded playoff format, it doesn’t take 90 wins to contend; September relevance starts in the mid-80s. Compared to an elite win total, mediocrity is easy to maintain, which gives middling teams the freedom to fight a winnable war on two fronts: tomorrow and today. If we’re exiting a time of dramatic teardowns and entering the age of the balancing-act rebuild, then the A’s are, as always, ahead of the pack. Beane has been balancing almost since Barreto was born.

A Song of Ice and Ire: Watching the Packers (Barely, Controversially) Beat the Cowboys at Lambeau