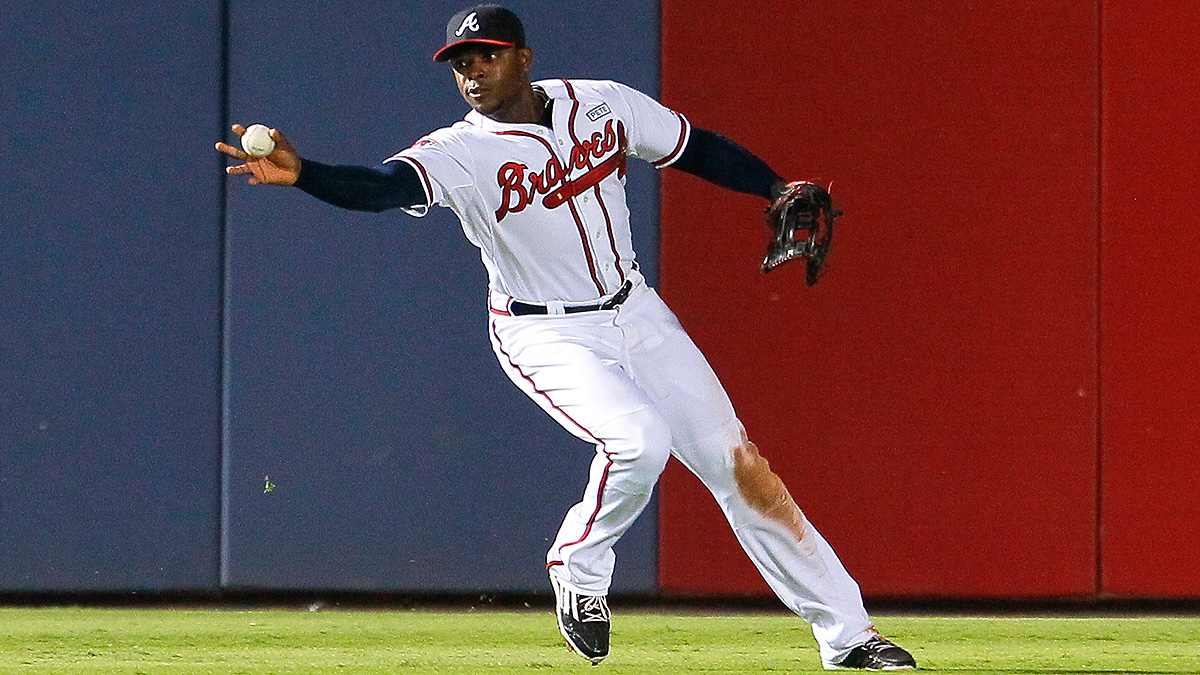 Since you last read about the Padres trading for Wil Myers, which they did after agreeing to trade for Matt Kemp, they have reportedly traded for Justin Upton, Derek Norris, and Will Middlebrooks. For those counting at home, that’s five new bats in the starting lineup for the team that had a very loose definition of “lineup” last year. Are these moves smart? Can the Padres contend? Do they realize they can’t play 47 outfielders at once? It’s a lot to digest, but fear not! Grantland baseball gurus Ben Lindbergh and Jonah Keri are here to talk it all out.

Ben Lindbergh: So, uh, in fairness to the Padres, hitting .226/.292/.342 as a group, as San Diego did last season, can make a team do strange things to acquire offense. Plus, if defensive shifting has shown us anything, it’s that there’s nothing that says players have to stand at their traditional positions. Get ready for Carlos Quentin in left, Kemp in left-center, Upton in right-center, and Myers in right. That has the potential to be an average defensive outfield, and it will only cost Bud Black one infielder!

Jonah Keri: That’s such an awful group of glovemen that I’m not even sure putting all four of them out there at once would lead to average defense.

But OK, let’s take a stab at what the Padres might be doing here.

1. Kemp is going to play center field for the Padres, at least in 2015, which is a spectacularly terrible idea.

2. GM A.J. Preller & Co. weren’t necessarily all in on Upton, who’s a free agent after the 2015 season, but since they reportedly only had to give up lefty Max Fried, second baseman Jace Peterson, third baseman Dustin Peterson, and outfielder Mallex Smith, this exchange might have been too attractive to resist. In other words, this could be an “I Don’t Give a Crap” move, where a team sees a chance to add value to the roster but knows more moves will have to follow for it to all make sense.

3. Someone could be changing positions. Myers has played numerous positions throughout his professional career, so he’s not tethered to any one spot, and he’s still young enough that the Padres could consider moving him to first. And even though the Padres might consider Kemp the least awful center-field solution in the short term, news of his arthritic hips (which leaked yesterday and forced fans everywhere to feverishly study up on HIPAA laws) means he’ll probably shift to another spot eventually. The Friars could also move veteran outfielder Seth Smith, who signed a two-year extension before the 2014 trade deadline, to first base. Of course, none of that addresses the fact that the Padres don’t have a true center fielder on the roster. That is, unless you count Will Venable, who’s not very good at baseball, or Cameron Maybin, who might be the team’s most injury-prone player … which is saying a hell of a lot.

4. The Padres are going to have to trade away at least one player. Four-man outfield jokes aside, there’s no room for Quentin, who’s a very good hitter when healthy (“when” being the operative word) and really should be DHing somewhere.

5. We’ve heard over and over again that right-handed power is at a premium in today’s game, so maybe Preller is trying to corner the market with his new power bats, all other facets of the game (including defense, positional balance, and lineup balance) be damned. Too bad Petco Park is murder on right-handed power hitters.1

Lindbergh: I think you’ve summarized most of the potential resolutions to a whimsical series of transactions. This is probably the prelude to a subsequent trade (or trades), just as it was when the Red Sox started stockpiling outfielders — and just as it may have been when Preller remade the Padres’ catching corps, if the latest reports about yet another swap, this one sending Ryan Hanigan to the Red Sox for deposed third baseman Middlebrooks, prove accurate.

Even if Middlebrooks replaces Yangervis Solarte at the hot corner, the Padres won’t have a shortstop (sorry, Alexi Amarista), and their rotation is top-heavy and dependent on multiple injury-prone arms. And while Yonder Alonso might project to be an average first baseman, he hasn’t played like one to this point. As you suggest, the Padres can stick one or more of their many corner bats at first and trade some of the surplus for help elsewhere on the roster: Seth Smith, for one, is coming off an uncharacteristic offensive season and seems like a good sell-high guy, unless the Padres believe that LASIK surgery really transformed him into a super-soldier. Plus, the players deeper on their outfield depth chart have chronic DL issues (Quentin, Maybin) or the ability to rotate through all three outfield spots (Venable), which will help clear the logjam.

The problem, aside from the slight more-players-than-positions snag, is that unless the Padres are planning a Dr. Frankenstein experiment to merge a couple of corner guys into a true center fielder, they’ve likely locked themselves into lousy defense at that position: Kemp has the majors’ lowest defensive runs saved total over the past five seasons, and that was without playing center for most of 2014. Petco’s outfield isn’t as large as its lack of homers would suggest, and the pitching staff ranked 23rd in fly ball rate last season, but the value the Padres surrender on defense is still going to eat into their run differential added on offense.

I don’t buy that right-handed power has become exponentially more valuable in the current offensive environment — the GM transition team did tell Preller that the left-field fence is only moving in by 34 inches, right? — but there’s something to be said for adding talent and worrying about where to put it at a later date. It’s just that usually when we talk about a team making moves without position in mind, we’re discussing its amateur draft strategy, not its moves at the major league level. We certainly can’t call Preller complacent or uncreative.

• Preller was also the guy who pushed the Rangers to trade Ian Kinsler for Prince Fielder, so this might be as simple as a former scout valuing the power tool above all else.

• Ben, do you think the Padres are now contenders? You mentioned the rotation being somewhat fragile, but if Jesse Hahn is the only starter leaving town, you’ve still got a strong top four (if healthy) in Andrew Cashner, Tyson Ross, Ian Kennedy, and Odrisamer Despaigne. (The club reportedly signed Josh Johnson and Brandon Morrow, but the odds of those two combining for 30 starts are about the same as Preller making me the starting center fielder and you the starting shortstop.) The Dodgers still look like NL West favorites (I like what they’ve done this offseason) and the Giants don’t look that different from the team that just won it all, except for Pablo Sandoval’s departure. There’s enough raw talent and power on the Padres roster to at least make the team more interesting. But this could still be a third-place ballclub.

• The Braves’ offseason might be weirder than San Diego’s. They’ve now traded away talented twentysomething outfielders Upton and Jason Heyward in an attempt to bolster their pitching staff while getting younger and cheaper. But all of that makes the four-year deal they gave 31-year-old outfielder Nick Markakis, who’ll be rehabbing from neck surgery all winter, even harder to understand. Plus, they cut Kris Medlen loose; if he was that big of a health risk, why trade for Fried, who also recently had Tommy John surgery? And why did the Royals happily give Medlen a two-year deal with an option for a third? The Braves are supposedly reloading for when they move into their new, taxpayer-gifted stadium in 2017 … but by then Markakis will be 33, while Upton and Heyward will still be in their twenties. At least they kept B.J.? 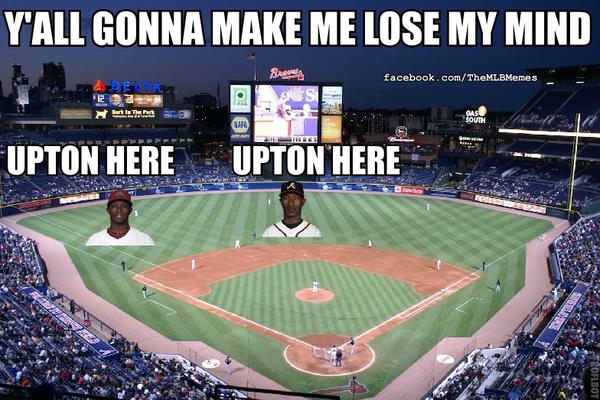 Oh, and if the Braves are that budget-conscious, not insisting that the Padres take albatross Chris Johnson in the Upton deal seems odd.

Lindbergh: Speaking of Preller’s history, he was also a key figure in the front office that signed Shin-Soo Choo, so it seems safe to say that good defenders aren’t no. 1 on his wish list.

Given their talent, brain power, and payroll, it’s difficult to imagine the Dodgers not entering next season (or, for that matter, any foreseeable season) as NL West favorites, even though they no longer hold the division’s “too many outfielders” title. Projecting for future transactions (and in a division with Andrew Friedman, Brian Sabean, and Trader A.J., it’s hard to say how many more are coming), though, I can squint and see San Diego as a wild-card contender and legitimate competition for San Francisco, which I wouldn’t have said … well, yesterday.

The Padres should at least escape the 70-something-win limbo where they’ve been living for the last four seasons, and under the 10-team playoff format, any team whose true-talent win total starts with an “8” has a shot at October. The Padres haven’t ranked higher than 11th in NL attendance since 2007, but maybe all of this activity will generate enough interest for them to climb a couple of slots. If I lived in San Diego, I’d buy season tickets just to see what their lineup cards will look like. Side note: How depressed are Diamondbacks and Rockies fans right now? Below their baseline sadness levels, I mean.

It’s worth pointing out that Preller created an actual offense where once there existed only a sad stat line without trading Cashner or top prospects Matt Wisler, Hunter Renfroe, and Austin Hedges (unless they’ve traded some of them since I started this sentence). Although the Padres have sold prospects in bulk, shortstop Trea Turner, who went to Washington in the three-way Myers trade, is the only one who would have ranked in San Diego’s top five.2 That’s a testament to the quality of the minor league talent assembled by former GM Josh Byrnes and former assistant GMs A.J. Hinch and Chad MacDonald. (By the way, Byrnes and MacDonald now work for the Dodgers and Braves, respectively, and their familiarity with Padres prospects may have helped facilitate the Kemp and Upton trades.) Preller’s strength is supposed to be scouting, so if he excels at anything other than getting other GMs to overcome their inhibitions, it should be replenishing the farm system and picking the right prospects to sell. Theoretically, that skill set makes San Diego well suited to stay active on the trade market.

And hey, while I was writing this response, the Padres reportedly signed David Ross, bringing their transaction total since we started this thread to two. In the past few days, they’ve acquired four catchers and dealt three, counting Hanigan in both groups. As our editor, Mallory Rubin, just pointed out, there’s going to be a great oral history of the week when every major league catcher spent at least 10 seconds with the Padres. The common thread is that all of these guys (save for Tim Federowicz) are great framers, an area in which the Padres lapped the field last season. And when they promote Hedges, the best defensive catcher in the minors, they’re only going to get better behind the plate. Would you believe that there are teams out there that don’t have enough catchers and outfielders?

“THESE ARE NOT YOUR GRANDPA’S PADRES MUTHAFUCKAAAASSSSSSSS!

“I don’t even care that I don’t think all of these moves are right for this park. The Pads have never done this. It’s like watching the biggest loser in school spend all his summer job money on a Corvette, then walk up to the head cheerleader and ask her out.”