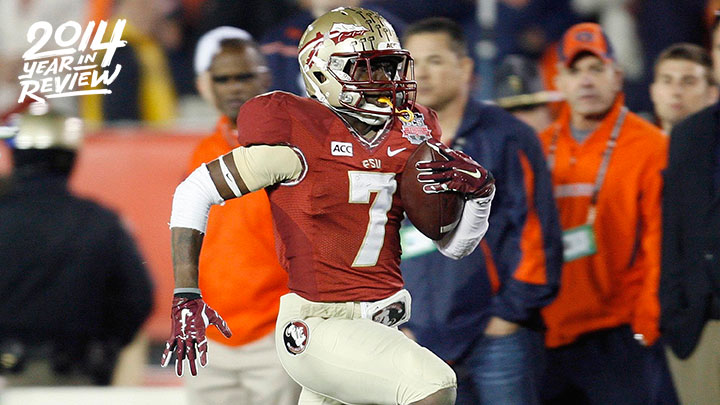 This wasn’t the final blow that FSU would strike against Auburn that night in Pasadena — the Tigers regained the lead on a Tre Mason scoring run before a title-clinching catch from Kelvin Benjamin, all in the game’s final 90 seconds — but spiritually, Kermit Whitfield’s return is what did it. With that one breakaway sprint, Florida State, which hadn’t had to do much all year in the way of close games, was through being hunted. The Seminoles were back to being inevitable.

I missed the whole thing. So did a lot of people in that stadium. Whitfield’s 100-yard dash just happened to coincide with that stretch of fourth-quarter time during which visiting press typically make their way from the box high above the action down to field level.

I wasn’t in the elevators or trapped on a concourse. I was in the bathroom behind the press box, trying not to pass out. I was five weeks off a grisly accident that had left me with a large and disgusting burn on my leg,1 an injury sustained the day before the Iron Bowl. I’d already missed the Kick-Six game. This was apparently my year for missing things happening to Auburn.

All of our critics’ best-of lists, the Year in Holy S#!t sports moments, and our series on What We Saw in 2014.
The wound was too small for a skin graft, so my doctors decided to let it close up on its own. From late November until early March, when it finally finished turning back into skin, it was just this exposed stretch of meat. The fine medical professionals at Atlanta’s Grady Burn Center — once they got over the horror of me intending to get on one of Delta’s airborne germ tubes in this state — covered the injury in a burn cream so strong the jar came with a warning to keep pregnant women from touching it, and then they wrapped my leg, from mid-thigh to ankle, in sterile gauze and Ace bandages. They also told me I wasn’t to go near any players or their locker rooms. The risk of coming home with a staph infection was too high, so I was going to watch the whole game unfold from up top.

But getting around at the Rose Bowl requires a bit of hiking — more walking than I’d done since the accident — and by the end of the third quarter, all the burn cream had rubbed into my bandages, and every time I moved, the gauze would shift over the raw meat on my leg. When Cody Parkey kicked a 22-yard field goal to put Auburn up 24-20, with just over four and a half minutes to play, I bolted for the bathroom to try to readjust the dressings.

All of which is to say that I can claim with complete sincerity that I felt, rather than saw, the momentum shift in the title game. They pump the radio broadcast through all the speakers while the game’s going on, but a split second before you could even hear the call, you could feel the rumble through the concrete, feel it becoming a roar. It was almost primal, experiencing a game breaking like that solely through your ears and the soles of your feet. All in a stadium where you half expect to look up and find yourself surrounded by typewriters and porkpie hats and seamed stockings.

Or maybe I’m rationalizing myself out of being mad about it more than 11 months later. I haven’t gotten over missing that Iron Bowl, of all Iron Bowls. In just a couple of more weeks, I get to go watch Florida State put on a show in Pasadena again. The scar’s still there.2