The Year in Holy S#!t: T.J. Oshie Becomes an American Hero Before Breakfast 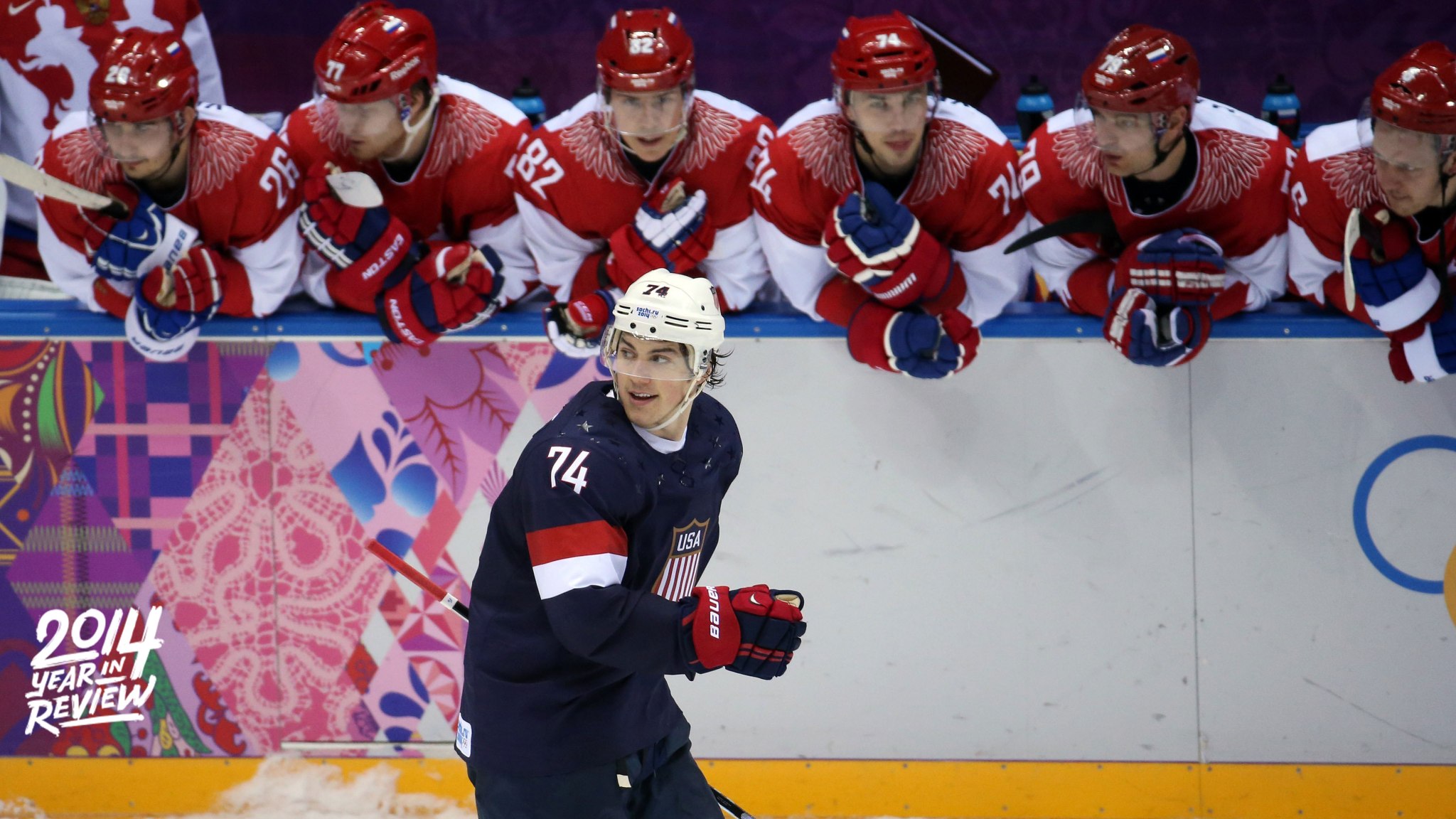 Depending on where and with whom you transacted, you could expect to get somewhere between 30 and 35 rubles for a buck on the day T.J. Oshie scored four times against Russia. In the hours leading up to the game, the fears of terrorism and broken-doorknob complaints from a week earlier felt silly and distant, replaced by an atmosphere that was festive, nervous, and awash in flags. The earnest fervor of the host nation’s fans was difficult to resist.

The previous night, President Putin had stopped by the Team USA and Canada headquarters, posing for photos, quaffing red wine, and lapping up cheers. In less than six months, the world’s most powerful leaders would be convening back here for the 40th G8 summit. It all felt, finally and briefly, like the realization of a vision: For once you could see what the Sochi planners may have had in mind, and for once you could convince yourself that maybe it all had a future.

Even saddled with this impossible buildup, the actual game did not disappoint. Russia scored first — mayhem — and then the U.S. tied it. In the third period, Joe Pavelski gave the Americans the lead — before the Russians evened things up three minutes later. (Both Russian goals were scored by revered team captain Pavel Datsyuk; both American goals were celebrated Stateside by folks gathered, pre-breakfast, in bars.) Inside the Shayba Arena, fans pounded on drums and wailed on vuvuzelas, while Putin looked on inscrutably, as overtime passed with no resolution and gave way to a penalty shootout.

Olympic shootout rules require that only a team’s first three players are all different. If the score is still tied, it all reverts to an official policy of “anything goes.” Which is why Russia, with the shootout tied at 3-3, opted to alternate back and forth between Ilya Kovalchuk and Datsyuk, and why U.S. coach Dan Bylsma countered with Oshie, Oshie, Oshie, Oshie, and then Oshie.

All of our critics’ best-of lists, the Year in Holy S#!t sports moments, and our series on What We Saw in 2014.
The St. Louis Blues forward began the same way on every attempt: big swoop to the right, in over the blue line, back across the middle slowly, so slowly, like he was tooling around on foot in a basement or teaching kiddos a drill. When Kovalchuk took his turn, he did so with such markedly superior speed that it looked like someone was pressing fast-forward.

What did move quickly about Oshie, though, were his hands. He scored on his first attempt, missed on his second, and triumphantly knocked Sergei Bobrovsky’s water bottle off the net with his third. Oshie converted his fourth attempt high and then never got off a shot on his fifth, as a demonstrative Bobrovsky poked the puck away. Jonathan Quick made a sprawling save against Kovalchuk on the other end, and then Oshie started in for a sixth attempt, that same slow S-shaped stroll up the ice, and snapped the puck into the back of the net to win the game, months of endorsements, and American hearts.

It was an all-time classic, one for the ages, and yet in hindsight it somehow barely registers, shrouded by a sort of dreamlike remove. The outcome didn’t actually matter; it was round-robin play and both teams would advance on. Despite anticipation for a potential championship-round rematch to please the hockey gods, neither team went on to so much as medal. Russia lost in the quarterfinals to Finland as its proud fans looked on in abject horror, and the swagger in Olympic Park dulled permanently into gloom. “Eat me, and I won’t be here anymore,” the Russian coach said after the game.

The Americans also disgraced themselves against Finland, getting smoked in the bronze-medal game. By that day, only a week later, a number of reporters had left Sochi to cover the violent unrest and unfolding presidential coup in neighboring Ukraine.

Russian troops in Crimea soon followed, and the planned G8 conference in Sochi turned into a G7 summit in Brussels,1 not quite the future that had ostensibly been envisioned. Right now, if you wanted to buy back that dollar you traded for rubles on the day T.J. Oshie scored four goals against Russia, it would cost you twice as much as you made.