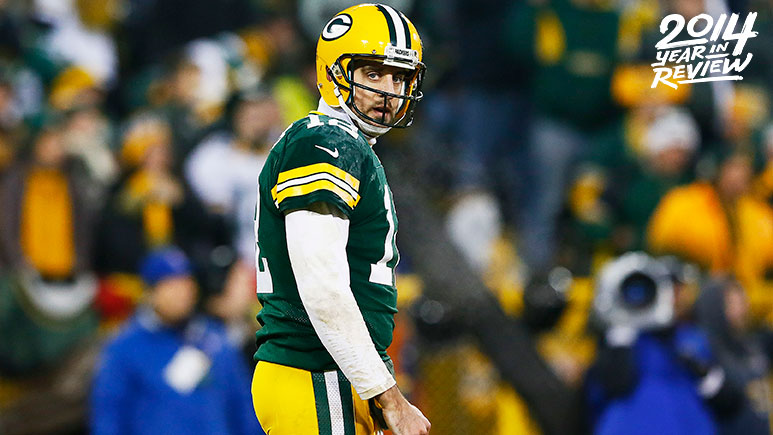 The throw isn’t all that different from countless others. It’s second-and-1, early in the Packers’ late-September trip to Soldier Field. As the left side of the Chicago defensive line crashes inside once the ball’s snapped, Aaron Rodgers drifts to his right. Never stopping, and with a 303-pound Will Sutton bearing down, Rodgers flips his wrist and the ball flies 40 yards, right into the waiting arms of Green Bay’s rookie tight end, Richard Rodgers. Plays like this seem to come once a game from Rodgers, but it was the first time the thought crossed my mind: Aaron Rodgers is the best quarterback I’ve ever seen. It wasn’t the last.

I don’t mean that Rodgers is the Greatest Quarterback Ever. That’s a different conversation, one for much later that involves information we can’t yet know. Appreciating Rodgers right now isn’t about a résumé or a body of work. It’s the individual moments; the feeling that comes with watching him play the position is unlike any I’ve ever had.

The Manning-Brady era of quarterback adulation formed around a certain vocabulary, including words like “precision,” “surgical,” “mastery.” Our best quarterbacks have been mathematicians, scientists; defenses are a puzzle, an equation to be solved. Brady and Manning work in a lab.

All of our critics’ best-of lists, the Year in Holy S#!t sports moments, and our series on What We Saw in 2014.
Rodgers was built in one. He’s the quarterback we’d construct from scratch: a better arm than Peyton Manning, more mobile than Tom Brady, more accurate than Russell Wilson, a quicker release than Andrew Luck. For most quarterbacks, the goal is to exploit defenses. For Rodgers, the goal is to burn them down. While Luck can occasionally scrape the same force-of-nature heights as Rodgers, the difference is in just how casual Rodgers looks doing it. Luck has been held up as the perfect quarterback, and in so many ways, he is. But there’s a rigidity that comes with that. Luck doesn’t fall away from throws. He doesn’t make them with unsettled feet. Rodgers does. That’s the gap between Rodgers and everyone else: He’s the best when he’s doing it wrong.

I’m writing this from Green Bay, where the Packers are a part of everything. It seems like every road has the same Aaron Rodgers billboard for a group of health clinics here in town. His name isn’t on them, and it doesn’t need to be. He’s revered here, and it’s easy to understand why. For 16 years, the Packers had a Hall of Fame quarterback, one who finished his career with every passing record imaginable. And somehow his replacement is better.

To be a championship threat, all the Packers need is a healthy Aaron Rodgers, and this year, they’ve had him. His second MVP season isn’t quite his first — his 2011 totals still don’t seem possible — but even as his touchdown-to-interception ratio gets mentioned every 15 minutes, what elevates Rodgers has nothing to do with numbers. It’s the throws — like that one in Chicago, the Randall Cobb touchdown in Miami, or the bomb to Jordy Nelson against Atlanta.

Josh Sitton isn’t Rodgers, but the Packers’ Pro Bowl guard has put together an enviable career of his own. As he and I talked yesterday, his quarterback’s name came up. “At times,” Sitton said, “I feel like he’s probably the best football player to ever play the game.”

At times, he probably is.