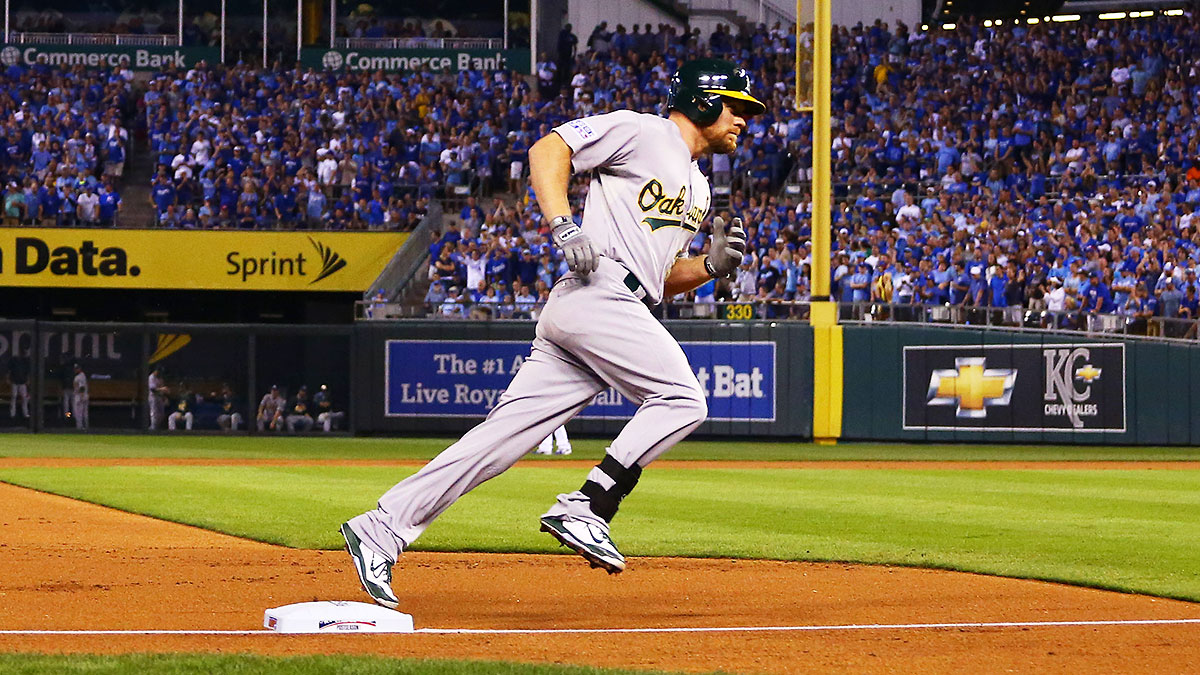 The Indians’ trade for Brandon Moss highlighted a quiet first day at baseball’s winter meetings, signaling the likelihood of bigger leaguewide moves as soon as today, and bigger happenings in Cleveland as soon as this coming season.

Moss, who was acquired from Oakland for infield prospect Joey Wendle, should upgrade an Indians offense that ranked seventh in the American League in runs scored last season, and just ninth in home runs. The lefty-swinging first baseman was an All-Star in 2014, peaking at .301/.393/.595 on May 21 and cranking 10 homers in his first 39 starts. Natural regression and a nasty hip injury limited him to a .205/.308/.369 line the rest of the way, though, and he’s coming off October surgery to repair that hip.

So there are a couple of ways to handicap Moss’s value moving forward. A pessimist could argue that he’s 31 years old; that even after successful surgery, he poses some health risks; and that according to estimates compiled by MLB Trade Rumors and baseball economics writer Matt Swartz, Moss will make about $7.1 million in arbitration next season, up from $4.1 million in 2014, and enough to rob him of his bargain label.

But there’s also plenty of positive spin, and the pros outweigh the potential cons. Even with his second-half pullback, Moss finished the season with 25 round-trippers, giving him 55 over the last two seasons, and 76 over the last three. And though it’s unimpressive at first glance, his .234/.334/.438 overall line in 2014 was actually 21 percent better than the league average per wRC+, which accounts for park effects and the sport’s overall lousy offense. Plus, Moss’s addition will push either David Murphy or Nick Swisher out of the lineup, eliminating one of the least productive players in baseball based on last season’s numbers.

Moreover, all Moss cost was Wendle, a 24-year-old second baseman with an iffy glove who hit a modest .253/.311/.414 in Double-A last season. We can simultaneously call this a good deal for the Indians while acknowledging some limitations with Moss, just as we can understand the A’s desire to sell high on Moss while wondering if the return for his services was a little light. (See also: their Josh Donaldson trade.)

The bigger takeaway is that the Indians could be dangerous contenders in 2015. This team won 92 games and earned a playoff berth in 2013, then followed up with 85 more victories in 2014. Though moderate pullbacks for breakout stars Corey Kluber and Michael Brantley are possible, and maybe even likely, those could be countered by a positive reversal of fortune for All-Star second baseman turned 2014 slumper Jason Kipnis. It’s also hard to imagine the Indians failing to improve on Murphy (who posted league-average offensive numbers, but played miserable defense that made him a replacement-level player) and Swisher (who hit a paltry .208/.278/.331), whether through bounce-backs for one of those guys or another lineup upgrade to pair with Moss.

Cleveland is positioned to become especially dangerous on the pitching side, though. Tribe hurlers averaged 27.2 years old last season, tied for the second youngest of any staff. I wrote about Danny Salazar and his electric stuff last spring, predicting a breakout for the talented right-hander. That initially failed to materialize, with Salazar posting a 5.53 ERA in his first eight starts to earn a demotion to Triple-A. But after a triceps injury healed and he returned to the bigs in late July, he produced strong numbers, striking out 73 batters against just 18 walks and five homers in 69.1 innings, with a 3.50 ERA. Still just 24 years old and under team control for five years, Salazar remains a major part of the Indians’ plans and could play a big role in a potential playoff run next season.

While Salazar has a reputation as a grip-it-and-rip-it pitcher who doesn’t get too caught up in analysis, teammate Trevor Bauer practically obsesses over it. Bauer’s been considered a major talent, an unusually studious player, and a blunt personality since his days as UCLA’s co-ace alongside Gerrit Cole. He’s been erratic as a pro, but showed plenty of strikeout potential last year, whiffing 143 batters in 153 innings and looking unhittable at times, including in a pair of scoreless outings in late August. Whether Bauer’s on-field success depends on mellowing out a bit is a subject best left to actual psychologists, not Canadian sportswriters, but everything from his third-overall-pick pedigree to his stunning seven-pitch repertoire suggests he has the talent to make major strides, even if he does so later than many people expected.

With the Royals possibly losing James Shields and the Tigers possibly losing Max Scherzer, the Indians can challenge in the AL Central. If Moss swats 25-plus again, Kipnis returns to All-Star form, and Salazar and Bauer join Kluber among the ranks of breakout Indians pitchers … look out.