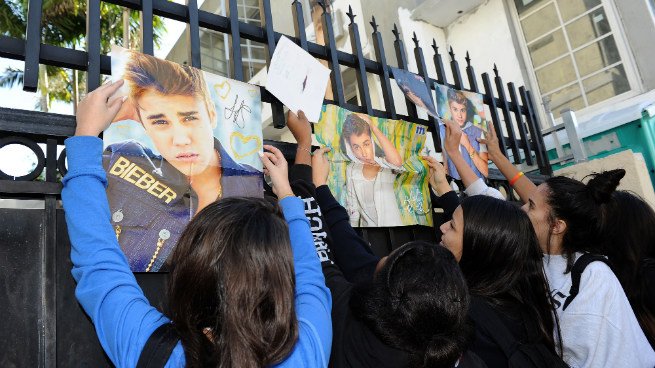 What the hell is going on with Justin Bieber? Glad you asked! Maybe he’s aiming to be the most eccentric baby billionaire since Howard Hughes. Or maybe he’s just drinking too much lean. Here’s the latest info on last week’s Biebergate scandal, when events culminated in a rogue egging, Lil Za’s arrest, and Bieber’s drag-racing DUI arrest.

• Justin is out of jail! Although he should use this experience as an audition for the role of “Cry-Baby” Walker in a movie of the musical version of John Waters’s Cry-Baby. Waters is already a fan of Bieber; he must love all the recent trashy Hollywood Babylon–type developments in his life.

• Bieber is in Panama with his team, including manager Scooter Braun, mentor Usher, and a childhood friend named Ryan Butler. It’s supposedly a “sitdown,” but  is probably actually an “intervention” meant to get Justin off the purp. Good luck convincing a 19-year-old pop star with millions of dollars that adults know what’s best for him and he should do whatever they say! He hasn’t shown any public display of repentance or remorse yet. He seems to just be chilling at the beach with model Chantel Jeffries, playing a lil’ football and wearing board shorts.

• He might get deported back to Canada, if a legion of anti-stans who signed a petition lobbying to send Justin back to Degrassi country have their way. But he’ll have to commit a more serious crime and book some more prison time before there’s even the smallest chance that happens.

• He has a “smoke room,” but also a kitchen that is stocked with bongs. He has basically a billion bongs, vaporizers, edibles, and everything else a teenage pothead who lives in a mansion might have. This made me think of the part toward the end of Clueless when Travis Birkenstock donates his bong to the disaster supply drive that Cher is running and she jokingly decides to categorize it as kitchenware.

• He compared himself to Michael Jackson on Instagram. But he meant it in the “weird pop star who has owned a monkey” sense, not the “drug addict surrounded by enablers” sense.

• Ariana Grande said Bieber is “the most visible and yet isolated human being I’ve ever met.” She is worried that people are taking his arrest too lightly, making memes out of the mug shot and not dealing with the actual implications of his addiction. Grande has her own personal demons, but they are literally personal demons.

• He financially supports his parents. I mean, duh, this is one of those things that makes Justin not so different from Shia LaBeouf. A lot of child stars end up as the breadwinners for their families, which can make the family dynamic complicated in a way that young kids are not equipped to deal with and shouldn’t have to be. Jeremy Bieber, Justin’s dad, is kind of a Dina Lohan/Kris Jenner figure who has been partying around the world with his son. Jeremy reentered the picture after Justin got famous and treats him more like a friend he can use for stuff than a son. Jeremy has clashed with Justin’s other father figure, his manager Scooter. Some sources claim that Jeremy helped Justin set up the drunk drag race that he then got arrested for. He’s not a regular dad, he’s a cool dad!

• Justin’s ex-housekeeper Tatiana Voziouk predicted Bieb will “end up like Michael Jackson” if he doesn’t stop sipping sizzurp. Voziouk has all the dirt. She tells Sunday People that he’s surrounded by “drugs and hangers-on,” which is pretty standard for arena rock stars who can support an entourage. She spilled on his taste for Fanta with codeine in it. She was “told not to touch those bottles.” He gets weed delivery all the time. Voziouk worked at Bieber’s Calabasas mansion starting in 2012, and she lasted a year. She talks about a time he got especially fucked up following a fight with his ex-girlfriend Selena Gomez; “When I saw him I was shocked, he was like a zombie. He had a glazed, vacant look and appeared to be totally oblivious.” She watched as Bieb’s weed carrier/sometime minder Lil Za screamed for Bieber to get on a tour bus. Justin “walked into the kitchen and there was Za who had a white pill in his hand which he pushed into Justin’s mouth. Justin didn’t even react and then he and Za walked back on the bus.” She has no idea what the pill was, but says that Bieber had girls who would come over and hang out while he was totally zonked. Bieber was loaning his credit card out to friends for days at a time, and then trashing the statements when they came. “One day I walked in and there was a huge bag of cash on a table, around [$60,000].” No one explained where it came from, and it was soon gone. She says she was fired, but still worries about JB.

One thing is for certain: Justin is Mileying all over 2014, only unlike Miley, he’s actually doing incredibly dumb shit like trying to have a street race in Miami while drunk. Whatever you think about Miley’s haircut or love of weed, she is not dumb enough to set up a sloshed drag race. If this means Justin is on the way to his “Leave Me Alone” phase, by way of the Spruce Goose, we just hope he manages to keep it safe and not kill himself or anyone else along the way. For this latest phase of Bieber-as-MJ, who will be his Elizabeth Taylor? Can it be Kim Kardashian, please?

Box Office Top Five: 'Ride Along' Still Riding, Along With Everything Else

'SNL': Jonah Hill Takes Flight in the Arms of His Buddy Leo