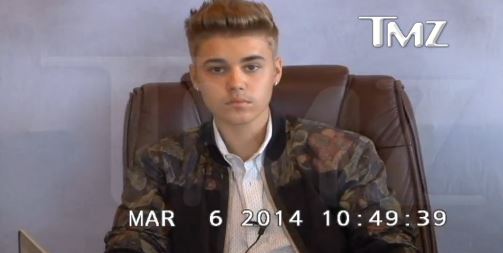 “I don’t have to listen to anything you have to say.”

Justin. Bartholomew. BIEBER! What are you doing, little buddy? Whole nations despise you primarily for one reason: your unearned swagger, your status as a pop “icon” without the chops or the moves or the personality or the message or the anything, really. You’re rich as F and your humble dial’s turned all the way up to zero. Your best hope was being adorable.

Instead, you’re peering into the camera lens and fixing your collar. (Much like the way you fixed your hair at the police station after being arrested on charges of street racing while under the influence. In your mind — and quite likely in reality — every moment is public, a mandate to stunt.) You’re being deposed for a lawsuit involving your bodyguard assaulting a photographer. You’re there for four and a half hours. TMZ edits your experience into four clips. We have to talk about all of them.

2. Asked about Selena Gomez, Justin assumes a look of vengeance. He starts saying “Don’t ask me about her again” so many times; his eyes are dead and his finger is wagging and it’s honestly terrifying because this kid is so rich and appears to not only not give a fuck but to not know about the world where people do and don’t give fucks that anything could happen. No one dies in the end. Justin walks out like it’s a concert some broke-ass promoter hired a drunk sound guy for and didn’t tell The Talent till He arrived.
[protected-iframe id=”af06a4a0a6ee0c0e22545e70794fe60d-60203239-57808363″ info=”http://cdnapi.kaltura.com/index.php/kwidget/wid/1_n4hyb5f5/uiconf_id/6740162/st_cache/99570?&” width=”540″ height=”304″]

Fox goes on a renewal spree, picking up 'The Following,' 'New Girl,' 'Brooklyn Nine-Nine,' and 'The Mindy Project' for next season.