The Fast and the Bieberous: A Quick Guide to Justin Bieber’s Night of Smoking, Drinking, Drag Racing, and Being Arrested 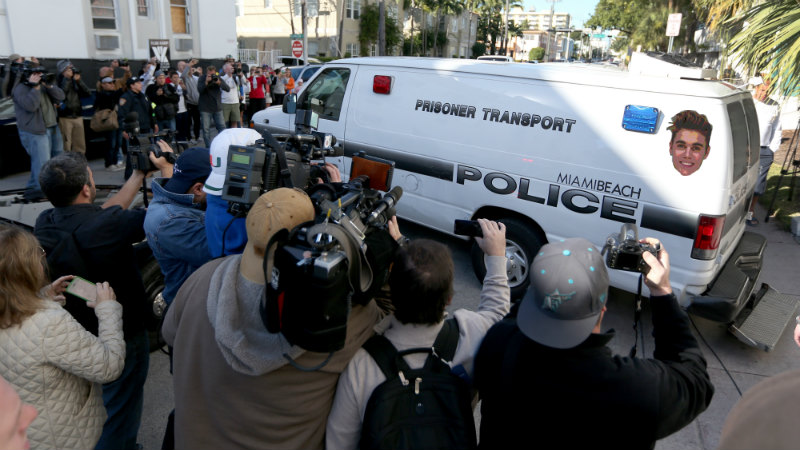 This is the moment, people. The Bieberpocalypse, the Biebularity, the day you can’t avoid our era’s foremost tween sensation even if you try super hard — it’s the sadly inevitable-seeming “Justin Bieber ARRESTED for DUI and Drag Racing” headline. The Beliebers have already been informed of the accusations hurled against their lord — extremely informed; every-last-detail informed, thanks to TMZ — and now you’re being forced by your culture to catch up. So let’s do it, beginning with the clarification that no, this isn’t a trumped-up gossip headline. Successful Recording Artist Justin Bieber was genuinely arrested in the wee hours of Thursday morning in the state of Florida, in the coastal resort city of Miami Beach, for driving under the influence of drugs and alcohol, driving with an expired license, and “resisting arrest without violence.” (He allegedly swore at the cops. A lot.) Come, learn the rest, consider the mug shot, and exit as quickly as you came.

So Justin Bieber, Swaglord of the Beliebers, Selena Gomez’s erstwhile prince, was really only having a few drinks, right? Police Chief Ray Martinez tells the Associated Press that Bieber admitted to alcohol and marijuana use as well as to having taken prescription medication.

Has Scooter Braun tweeted yet? As of lunchtime Thursday: No.

What was going on with the drag racing? The Miami Herald writes that Bieber’s entourage “used their cars to block traffic,” which sounds insane in a very specific “Justin Bieber is a powerful man!?” way. Then again, a local man tells the AP, “This street is empty at night. There’s nobody out here at night.” Not as impressive anymore.

(Wait. Is Justin Bieber still a child artist or is he a man artist yet? He turns 20 years old in March. It’s your call.)

(Didn’t Zach Galifianakis spank him recently, though? Looks like that didn’t work, did it?)

What does Justin Bieber’s mug shot look like? Hoooo boy. Like a surfer trying to make extra deep V-necks “a thing” on the same day he has a 4 a.m. call to shoot a Clearasil commercial?

(Police departments are really just all-caps hashtagging mugshots these days and tweeting them at stars, huh?)

But do you know how fast he was going back there, sir? Supposedly 55 to 60 mph in a 30 mph residential zone.

And what did Justin Bieber ALLEGEDLY say after being pulled over? “Why the fuck are you doing this? What the fuck did I do? Why did you stop me? I ain’t got no fucking weapons, why do you have to search me? What the fuck is this about?”

What was Justin Bieber driving? A yellow Lamborghini.

Does Justin Bieber wear a shirt in the strip club? Ha, nope.

What was Justin Bieber’s blood-alcohol content? We’re as ready for this information as you are.

There’s been a lot of messy stuff about Justin Bieber in the news lately, right? There has been, most notably the kind involving egg-based assaults on neighbors’ homes.

Does Justin still sell albums, though? His December album, Journals, available only on iTunes, was rumored to have sold about 100,000 copies in its first week. (iTunes didn’t report figures.) It was a significant decline for Bieber, whose June 2012 record Believe debuted with 374,000 copies sold. (It’s since gone platinum.) A similar trend for Bieber’s big-screen career, too: Never Say Never, a concert movie/documentary, earned $73 million domestically in 2011. Believe, a new release in the same vein, has made $6.2 million since its Christmas 2013 premiere.

OK. So what’s going to happen with this arrest? As an underage driver, Bieber will be charged with driving under the influence if he blew a .02 percent or higher on the Breathalyzer. “For a first DUI offense, there is no minimum sentence and a maximum of six months, a fine of $250 to $500, and 50 hours of community service,” the AP writes. “For anyone under 21, there is an automatic six-month license suspension. A first conviction for drag racing carries a sentence of up to six months, a fine of $500 to $1,000 and a one-year license suspension.”