‘SNL’: Jonah Hill Takes Flight in the Arms of His Buddy Leo 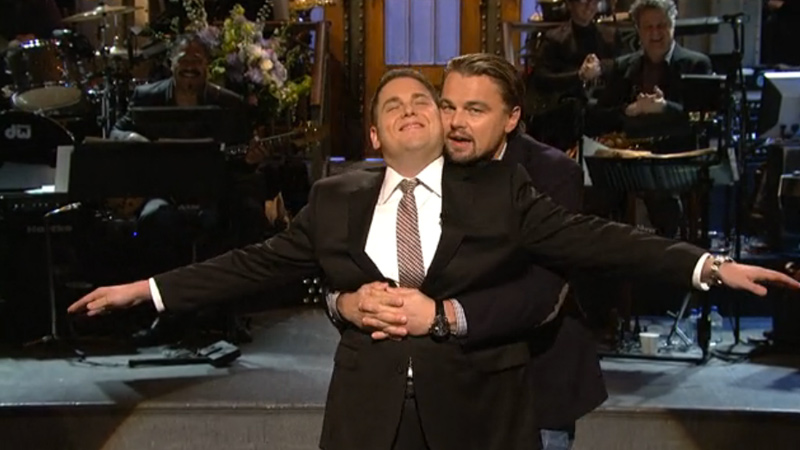 Jonah Hill, reluctant funny person, returned for his third hosting gig on Saturday Night Live this weekend. Hill’s transition from Apatovian goof to two-time Oscar nominee (for Moneyball and, more recently, The Wolf of Wall Street) has been publicly rocky, mostly due to a self-important interview with Rolling Stone, about which Hill expressed regret last week. Maybe appearing on SNL and taking a few horse hooves to the face was an attempt to prove that the PR representations of his ego had been misinterpreted: Hill can come across as abrasive because, even post-Oscar affirmations, he seems to think that his talents are being garbled or misunderstood: Is he funny? Is he a Real Actor? Isn’t it obvious that he can be both?

It is kind of enigmatic to talk about your passion for working with Martin Scorsese and the pay cut you happily took to do so as well as that time Joe Pesci stuck his finger in your ass during the same press tour. That’s a good quality in a late-night sketch show host: You don’t know what you’re going to get.

We’re still a few weeks away from the Sochi Olympics, but apparently tackling the pressing issue of male figure skaters’ sexuality cannot wait (thanks, Putin). The cold open imagined a straight male team of ice dancers doing what bros on ice are wont to: Bobby Moynihan alternating between playing his air guitar and doing some homophobic pantomime, Jay Pharoah executing an impressive “booty scootch” after mowing down some traffic cones, and Beck Bennett upskirt-snapping his partner (an Applebee’s waitress, Kate McKinnon) as he chased her around the rink for a quick grope.

Hill’s monologue was quickly derailed by audience questions (via cast plants, and including Taran Killam’s Brad Pitt) about working with Leonardo DiCaprio (and the quality of his “beautiful” hair). As you’ve already seen, I’m sure, DiCaprio himself crashed the party in predictably exquisite fashion, which doubled as a cruel tease because DiCaprio still hasn’t deigned to host the show. It was a good way to package Hill’s “acting like a big shot” and insecurity without making too much of a thing about it.

When Hill hosted in 2008, we were introduced to 6-year-old Adam Grossman at his regular haunt, Benihana. He revived the character during his second appearance as host, and here he is again, precociously flirting with waitresses and waving his fingers around (“I’m SIX!”) to diffuse any tension caused by his over-schmaltzing. Without Bill Hader as his long-suffering father/dinner companion, Hill is paired with Vanessa Bayer as his stepmother, a child psychologist named Debbie (Grossman is “as it were, her white whale”). I miss Hader here, whose character kind of drove the sketch, but I always appreciate it when people touch on communal restaurant table problems.

A pre-taped sketch, “The Hit,” dealt with another common conundrum: You’re about to assault someone, but you’re struck by the wonder of snowfall while trapped in a car with your thug buddies. We’ve all been there. Jay Pharoah, Kenan Thompson, and Taran Killam want to stay focused on the bloody job, but visions of “a brother like me be cuddled up next to the window” in a slouchy sweater, nursing a cup of cocoa with marshmallows and listening to Carole King (“Tapestry is my shit!”) keep creeping in. This one wasn’t perfect and maybe could have used a little more work to make it tighter, but I can’t fault it because look: a wee white bunny in a winter murder-scene wonderland!

I’m sure the next sketch, “Couples Quiz!,” will be divisive. As with politics, there’s no use arguing the merits of a toilet joke. You’re either onboard or you’re mortified, horrified, and absolutely disgusted with whoever was responsible for reminding you that this is a topic that exists in the world outside of the restroom. Me? I was just happy to have a shake-up in parody game-show town. Unlike most SNL takes on the format, this one never got past Round 1: deciphering which of the four contestants had broken the toilet with his or her catastrophic dump. Somehow the topic became a serious legal issue (landmark building, preservation society) and Hill had no choice but to own up to not only clogging the loo, but double-clogging it. Hill’s conviction was all the proof we needed to believe that he’s past the Rolling Stone dustup: “I’m a wild animal that should live under a porch,” he testifies, and with that, the competing couple receives a trip to Hawaii.

You may know British band Bastille from their cover of Miley Cyrus’s “We Can’t Stop,” but I’m just having a hard time getting over the dramatic drumstick moves pulled by Daniel Smith during “Pompeii” and his funny sweater that didn’t want to commit to cable-knit OR loungewear. The song is earwormy enough, but I don’t think non-Bastille fans will convert over this. “Oblivion” features a string section and, while pretty, is similarly unremarkable.

Next, we were treated to a solid “Weekend Update” — Seth Meyers’s penultimate turn before head writer Colin Jost takes the co-anchor seat — that featured Justin Bieber’s arresting officer Frank Medina’s (Thompson) unique perspective on being a cop in Miami (he’s seen so many tigers in back seats and alligators in car trunks guarding cocaine stashes), and your favorite Russian countrywoman, Olya Povlatsky (McKinnon), reprising her sad song (running away from angry wolves, romancing dogs, and the dating app Timber, which requires women to climb trees until male villagers cut them down to retrieve them). My only regret is that McKinnon’s Bieber, which wowed us last week, wasn’t brought back for some smugshots.

“Sweetland Ranch” wasn’t the strongest offering of the night, but it did feature a disjointed — if initially strangely realistic — horse punching, kicking, and branding its caretakers (Hill and Strong, who sang the horse some Joni Mitchell verses), so there was that. Telling toilet jokes and withstanding horse beatdowns! That’s a humble host. And while it’s a crowded arena for Her parodies (Seth Rogen impostor included), Me was a worthy contender just because of … well, the inclusion of the line “giving you butterfly kisses on your testicles” and Michael Cera dressed as a Twombly performing a sexy, mustachioed dance.

I think my favorite sketch of the night was the next one, even though it wasn’t hilarious so much as it was anchored to a meaty hook. Hill plays Jeffrey, at dinner with his boss (Bennett), the boss’s wife (McKinnon), and another couple (Thompson and Aidy Bryant); immediately after his compliment on the “handsome” Cobb salad is corrected (it’s a Waldorf), Jeffrey retreats into the bathroom to berate himself, innocent to the fact that he can be heard screaming (“You are a pussy!”) by his companions. After each subsequent self-hating bathroom break, Hill returns more tearful, sweaty, and eventually patched up with McKinnon’s makeup, including blue shadow on his brows. Hill’s commitment to this dinner-table neurosis was impressive, and elevated the sketch beyond what it was on paper (I can’t imagine it looked good wearing the “infant penis syndrome” line).

Timberlake MasterCard commercial: I was saddened to realize you were actually selling me something. For 10 seconds I thought there was a joke here, but no. Inexcusable. I’ll never charge anything again.

Kyle Mooney and Beck Bennett’s newest digital short was next, and this time they’re dealing with a topic close to my L.A. heart, the SoCal lifestyle. I enjoy SNL’s attempts to speak to its West Coast viewership (R.I.P., “The Californians”), and this time Mooney, Bennett, and their friends (Hill, Killam, Mike O’Brien, and Brooks Wheelan) take on some of my favorite topics: the kickback (you know, “just a kicker, dude”) in dad’s condo, the carnitas, and the sister of an acquaintance who’s moving back home and still may look as good as when she left. I’ve been struggling with the monotonous cadence of Mooney’s and Bennett’s characters, but this one worked.

Strong and Bayer have yet to misfire with their Swarovski Crystal girls, the ex-porn stars who disconnect their Quaalude drips long enough to pitch mispronounced products every once in a while. This time they’re hawking Lamborghinis — er, Lambortinis — the perfect automobiles for escaping, fleeing, and getting “great gash mileage.” (Bonus: “You’ll feel like you’re getting the rim job.”) Hill, the wheelchair-bound adult-film director Martin Porn-sese, cruises in, rattles off his résumé (Bangs of New York, Raging Boner, The Departed (Hymen), and The Wolf of Wall Street), extols the virtues of unnaturally flexible vaginas, and that’s that. While a Stefon movie is a good idea, the Swarovski girls movie is a great idea.

And then it was a wrap. During the good-byes, my viewing companion remarked that it was “really weird to see DiCaprio touching people [the cast] who aren’t models like this.” He’s like the sun, and we’re all helplessly trapped in his orbit.

Next week, Melissa McCarthy returns for her third time as host. Prepare the ranch dressing accordingly.

The Grammys After-Party: Hats, Helmets, Sippy Cups, and Everything Else From the World's Longest Awards Show