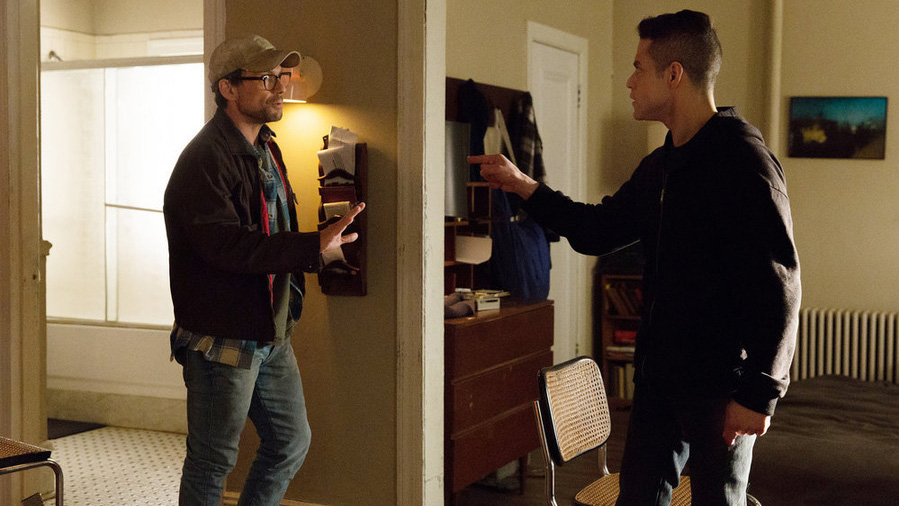 Finally, time to breathe. Episode 9 of Mr. Robot, “m1rr0r1ng,” was probably the slowest of the season, and probably also the least flame-emoji-hot episode. There was a whole lot of talking. Critics and redditors will probably find the episode’s slow pacing and plot advancement frustrating; after all, as The Sopranos taught us well, the penultimate episode is supposed to be where all the action really happens. The finale is for cleaning up the mess. But Mr. Robot upended the relentless machinery of plot (the story ends arguably in the same exact place where it was halfway through Episode 8) while reversing a twist that had many diving deep into message-board threads and rewatching every Alderson family scene.

Plot (un)twist! Mr. Robot is not real. Well, he was real, but he’s an imagined version of Elliot’s dad, who used to run a computer store and seems to be less averse to petty thievery than he initially let on. I trust the show’s sensibilities enough now to believe that this reveal was more of a bold move than a bad one, but the major twist in the previous episode1 does feel cheapened. There were a few other tidbits of value here. While not a particularly compelling piece of story, we had the rare treat of experiencing an entirely unhinged Rami Malek yell and lash out at a patient and paternal Christian Slater, a sly inversion of the duo’s relationship throughout the season.

But … but! The episode ends with an incredible scene of cold and clinical latex-wrapped malice from Martin Wallström’s Tyrell Wellick as he reveals the depths of his true super-evilness to Elliot, who has just himself been fully revealed to the audience as a profoundly unwell person. The two are quite the odd couple, but they probably fit, with Tyrell representing the monster that Elliot could be and Elliot representing the fullness of the neuroses afflicting Tyrell. Aside from these points of interest, this episode was housekeeping for the finale and had only one blink-and-you’ll-miss-it hacking scene.

I was more than happy for a softball of an episode. My weekend was spent sniffling through a summer cold, drinking homemade sidecars, and yelling at the TV as I crammed eight hours of the previous episodes of Mr. Robot directly into my brain. I get the sense that binge-watching is not the intended medium for watching the show — in fact it may be Mr. Robot’s hack. In eight straight hours it’s easier to note that Slater’s industrial-strength dadcore gear doesn’t really change, that Tyrell was slowly being styled into Stockholm Patrick Bateman, and that Elliot’s assumed “good guy” qualities were increasingly delusions of an unreliable narrator. In other words, you can crack the source code of this shit with on-demand, Reddit, and lots of coffee.

These realizations made the conclusion of this episode — that Elliot is much more troubled than we thought, Mr. Robot is a protective persona manifesting as his father, and Tyrell is Swedish Psycho — less of a surprise and more of a clarification. The only surprising twist to me would be the best bet for a second season: Angela being recruited as an Evil Corp exec? Sign me the hell up. Can the finale please end with Angela getting a gold Evil Corp chain or whatever it is giant, vague conglomerates do?

One last note. The episode’s title, “m1rr0r1ng,” has a few cultural meanings that are worth exploring, and not just because it forms the basis of the Chinese database that Fsociety needs to hack. “Mirroring” in the world of data management involves simultaneously creating replicates of stored data to ensure continuous operation in the case of disruption. I could also apply it symbolically to the similar trajectories that Elliot and Tyrell seem to be following. But the show also mirrors events beyond the fourth wall, namely the giant Ashley Madison hack and dump that has put thousands of adulterers on full blast. The most compelling thing about Mr. Robot so far has been its unflinching take on the issues of privacy in the modern age (or the delusion of privacy in the modern age). Its timing is, to some extent, accidental. But the issues it plays with are as current as a downed power line.

Mr. Robot, like the Ashley Madison hack, also exposes the false binary of good and evil in these stories. Elliot hacks scumbags, he hacks murderers and rapists, he hacks a cheating husband and pressures him to leave Elliot’s therapist. This happens much earlier in the show, when viewers are invested in the idea of Elliot as fundamentally good. But Elliot is also not a great person. Elliot Alderson spies on people. He uses their secrets against them. He sets dozens of criminals free. He destroys his therapist in a moment of despair, and the reveal that the Mr. Robot persona is a part of his own adds even more terrible things to his ledger of deeds, including an original plan to blow up a building full of people. Are the hackers the heroes or the villains? Are they the ones or the zeroes? The problem, we’re learning, is that, like all humans, they’re something in between. Flawed, struggling, and as messy as can be.

One Scare Too Many: ‘Sinister 2,’ ‘Paranormal Activity,’ and the Impossibility of Horror Sequels